The improvements in daily living introduced by industrial development are at the expense of the environment. With an increasing interest in flammable waste, it is becoming important to reduce the volume of air pollutants in the waste disposal process and use energy efficiently. There is a need for a system that can increase thermal efficiency while incinerating solid refuse fuel (SRF) products manufactured using combustible waste. Thermal plasma gasification and combustion composite systems are technologies that take advantage of combustion and gasification. An SRF input at 2 ton/h was treated using thermal plasma, and the operating temperature in the reactor was maintained at 1024 °C or higher. The exhaust gas at this time was measured at 7.08 % H2, 0.22 % CH4, and 9.26 % CO.

Environmental pollution is accelerating because of an increase in various wastes generated by industrial development towards the improvement of living standards. Accordingly, the amount of plastics generated as waste is also increasing, and this has led to research attention being focused on developing a method of treat waste plastics. Existing landfill facilities have reached their limit, and therefore, there is a growing social concern regarding the shortage of landfill facilities and environmental pollution treatment. Thus, there is a need to develop environment-friendly technologies that can convert waste plastics into energy resources. In this study, we designed and fabricated a complex system via a pilot scale thermal plasma for solid fuel recycling of plastics of gasification and combustion to process large-capacity solid refuse fuel (SRF), and to study reactor temperature characteristics and generated gases [1-5].

The characteristics of the pyrolysis gasification melting technology are as follows: 1) C and H components in the waste are converted to CO and H2, thereby minimizing energy loss due to cooling; 2) The material decomposition process is performed in a reducing atmosphere under a low oxygen state, and the total amount of gas to be treated is small and no harmful substances are generated. The generated substances are decomposed during the high temperature gasification reaction, which is economically and environmentally advantageous over incineration; and 3) Easy disposal of waste tires, waste plastics, waste oil sludge, and sludge.

The system consists of an SRF metering equipment, and a reactor equipped with a thermal plasma torch.

Figure 1 shows the 3D and actual view of the thermal plasma torch. The plasma torch is heated by the arc gas injected by the arc discharge generated between the cone-shaped cathode tungsten rod and the nozzle-shaped anode, which is designed to be ejected in the form of a high-temperature, high-velocity plasma jet. 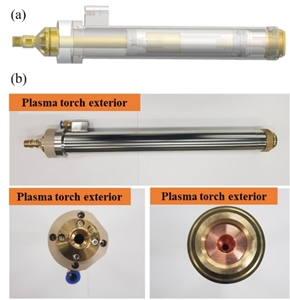 The feeder is a device that can quantitatively input SRF at a rate of 1–5 ton/h without agglomeration; a double screw and a paddle is installed to remove agglomerates.

The gasification and combustion system is equipped with thermal plasma torches to increase the temperature in the reactor. The SRF is supplied to the combustion reactor via the SRF connection passage in the upper portion, and it has a structure that is discharged by burning and gasifying through the plasma torch region. Inside the reactor, a refractory was installed to prevent damage during high temperatures, and a K-type thermocouple was installed to measure the temperature inside the reactor. For gas analysis, an analysis line was installed at the bottom of the reactor using a sus tube, and the gas analysis was performed using GC (3000 micro GC, Inficon, Switzerland) and gas analyzer (Vario plus, MRU, US). Figure 2 shows the flow chart of thermal plasma systems, while Fig. 3 shows the configuration of the plasma system. 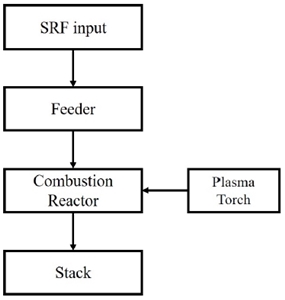 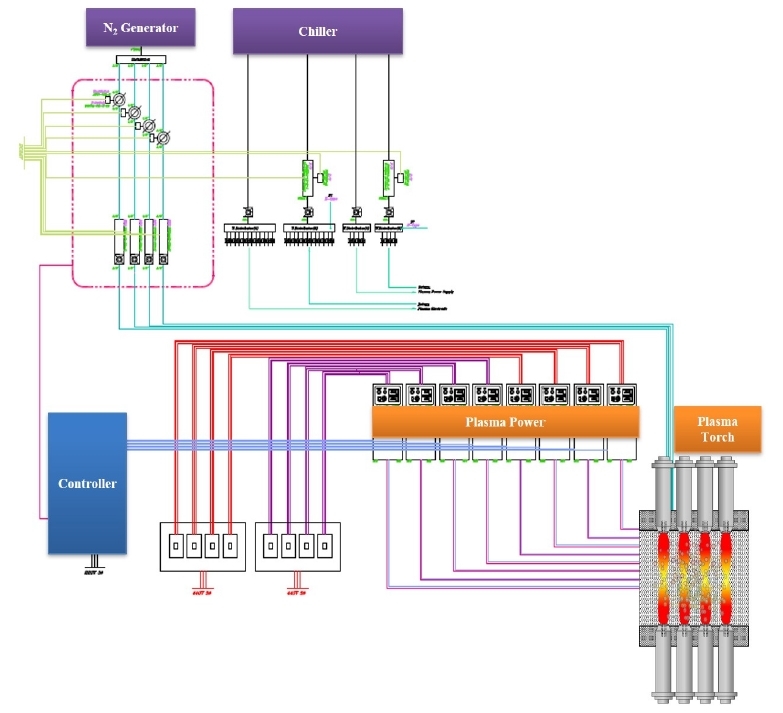 SRF is fed into the gasification and combustion system at a feed rate of 2.0 ton/h through the fixed supply system. The process conditions of the thermal plasma torch installed in the reactor are summarized in Table III.

Samples were prepared at the top of the reactor before the temperature in the reactor was raised, and the SRF was added 10 min after plasma discharge. CO, CO2, O2, H2, and CH4 were measured using gas analysis equipment, and NOx, HCl, CO, and CO2 were analyzed by TMS at the final exhaust port.

(Color online) Z-plane temperature distribution in the system according to the output change of thermal plasma generator.

The analysis was performed using TMS installed in the chimney. Table V shows the result of NOx, HCl, CO, and CO2 measurements.

SRF was found to show a high temperature of at least 1024 – 1360 °C above the continuous treatment of 2 ton/h, while CO and H2 concentrations increased based on the gas analysis. The reactor analysis confirmed that combustion and gasification occur simultaneously. In addition, the pollutant gas discharged to the atmospheric gas phase could be treated under environmental regulations. The results confirm that the gasification and combustion composite system can handle various samples.