The luminescence properties of surface-passivated methylammonium lead halide perovskites (PS) combined with CdSe/ZnS core–shell quantum dots (QDs) were investigated using photoluminescence (PL) and time-resolved PL (TRPL) spectroscopies. We synthesized two different PS films covered with QDs, namely QD/CH3NH3PbI3 and QD/CH3NH3PbBr3. Both the PL intensity and decay time were higher for the QD/CH3NH3PbI3 hybrid structure than those of the bare CH3NH3PbI3 film, which was attributed to an energy transfer (ET) process from the CdSe/ZnS QDs to CH3NH3PbI3. In contrast, for the QD/CH3NH3PbBr3 hybrid structure, the reduced PL intensity and decay time compared to those of the bare CH3NH3PbBr3 film were attributed to ET from CH3NH3PbBr3 to the QDs. These PL and TRPL results demonstrated that the optical properties of PS films can be improved by the addition of QD coatings, which could enable the application of such materials as support layers for adjacent active layers in optoelectronic devices.

Methylammonium lead halide perovskites (PS) have been demonstrated as prospective materials for light-emitting diodes and solar cells because of their inherent advantages, such as a tunable bandgap [1], high absorption coefficients [2], high carrier mobilities [3], and long diffusion lengths [4]. PS films can be easily fabricated using low-cost solution-based methods, such as spin-coating; however, solution-processed PS films contain charge traps at the grain boundaries, which results in increased non-radiative recombination [5,6]. In particular, the instability of PS films under humid conditions must be overcome to enable their widespread application. To address this, a surface passivation method was previously reported [7,8]. Jiang . demonstrated the reduced non-radiative recombination of perovskite film by surface defect passivation with an organic halide salt [7]. Moreover, we previously reported the improved luminescence behavior and stability of surface-passivated perovskite film with CdSe/ZnS quantum dots (QDs) [8].

Here, we report an investigation into the effect of surface passivation and the luminescence properties of PS films covered with CdSe/ZnS core–shell QDs using photoluminescence (PL) and time-resolved PL (TRPL) spectroscopy methods. For this purpose, the energy transfer (ET) phenomenon is introduced into the QD/PS hybrid structure to verify the luminescence properties. In this context, fluorescence resonance energy transfer (FRET) is a process involving transfer of the absorbed photon energy from a donor to an acceptor, where charge transfer (CT) involves transfer of the photo-generated electrons and/or holes from a donor to an acceptor. These processes are known to be affected by the spectral overlap between the emission of the donor and the absorption of the acceptor, and the difference in energy band offsets between the donor and the acceptor, respectively. To date, ET processes have been demonstrated in hybrid structures, such as graphene/semiconductor and graphene/QD, MoS2/QD, and QD/PS systems [9–11]. Thus, we herein report the fabrication of two different QD/PS hybrid structures, namely QD/CH3NH3PbI3 and QD/CH3NH3PbBr3, and the subsequent investigation of the ET processes between the PS and the CdSe/ZnS QDs.

Indium tin oxide (ITO)-coated glass substrates were cleaned by ultra-sonication (UCP-02, Lab companion) for 10 min in acetone, isopropyl alcohol, and deionized water, sequentially, and then exposed to UV-ozone cleaning (PSDP-UV4T, Novascan, USA) for 15 min at 100 °C. For the synthesis of CH3NH3PbI3, methylammonium iodide (159 mg; Great Cell Solar Ltd.), lead iodide (461 mg; Alfa Aesar), and dimethyl sulfoxide (71 μL, DMSO, Sigma-Aldrich) were dissolved in ,-dimethylformamide (0.7 mL; DMF; Sigma-Aldrich). The CH3NH3PbI3 solution was spin-coated onto the ITO substrate at 3500 rpm (5 s acceleration time) for 20 s, and then annealed at 100 °C for 1 min. Diethyl ether (DE; Sigma-Aldrich) was applied dropwise to the surface during spinning. For the synthesis of CH3NH3PbBr3, methylammonium bromide (112 mg; Great Cell Solar Ltd.), lead bromide (367 mg; Sigma-Aldrich), and DMSO (0.3 mL) were dissolved in DMF (0.7 mL). The CH3NH3PbBr3 solution was spin-coated at 3500 rpm for 20 s onto the ITO substrate, and the resulting spin-coated CH3NH3PbBr3 film was immersed in DE for 2 min. For fabrication of the QD/PS hybrid structures, CdSe/ZnS core–shell QD powder (5 mg; PlasmaChem GmbH) was dissolved in toluene (1 mL), and then spin-coated onto the PS films at 3500 rpm for 20 s. Figure 1 shows a schematic of the procedure for synthesizing the QD/PS hybrid structures. 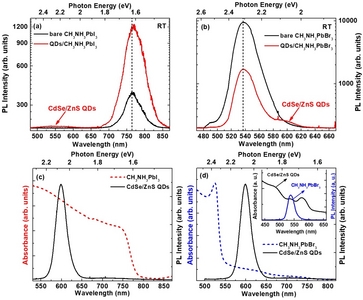 To investigate the ET process between the QDs and the PS in the QD/PS hybrid structures, TRPL measurements were conducted. Figures 4(a) and 4(b) show the PL decay curves of the bare PS and the QD/PS hybrid structures for CH3NH3PbI3 and CH3NH3PbBr3, respectively, which were taken at the PL peaks of CH3NH3PbI3 (763 nm) and CH3NH3PbBr3 (536 nm), respectively. The PL decay curves were fit well using a double-exponential decay function, i.e., = 1 exp(−/ 1) + 2 exp(−t/ 2), where 1 and 2 are the fast and slow decay times, respectively, and 1 and 2 are the pre-exponential constants of 1 and 2, respectively. The average decay time ( ave) was calculated using ave = i i2/ i i. The detailed decay parameters measured at RT are listed in Table I. It was determined that ave = 13.92 ns for the bare CH3NH3PbI3, while ave = 19.24 ns for QD/CH3NH3PbI3. The longer decay time for the QD/PS hybrid structure than for the bare PS was attributed to ET from the QDs to the PS. In contrast to the QD/CH3NH3PbI3 hybrid structure, the decay time of QD/CH3NH3PbBr3 (2.23 ns) was shorter than that for the bare CH3NH3PbBr3 (4.46 ns). This was attributed to ET from the PS to the QDs. It is important to note that the ET processes of the QD/CH3NH3PbI3 and QD/CH3NH3PbBr3 hybrid structures occurred in opposite directions. This finding suggests that the optical properties of the PS or the adjacent active layer can be improved using the ET phenomenon, since the bandgap energy of the PS films can be controlled by changing the composition ratio of the halide elements. 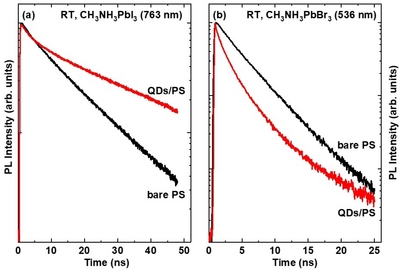 Figure 4. PL decay curves of the bare PS and QD/PS hybrid structures for (a) CH3NH3PbI3 and (b) CH3NH3PbBr3, taken at the corresponding PL peaks of 763 nm and 536 nm, respectively.

We herein reported our investigation into the luminescence properties of methylammonium lead halide PS films (CH3NH3PbI3 and CH3NH3PbBr3) covered with CdSe/ZnS core–shell QDs using PL and TRPL spectroscopy techniques. Following coating of the PS films with the QDs, the PL intensity and decay time of the QD/CH3NH3PbI3 hybrid structure increased compared to those of the bare PS, while the corresponding values for the QD/CH3NH3PbBr3 hybrid structure decreased compared to those of the bare PS film. These observations were attributed to ET processes between the QDs and the PS. Hence, such hybrid structures can be tailored to take advantage of ET processes in the required direction, to optimize the optical properties of the PS or adjacent active layers. We propose that these QD/PS hybrid structures showing ET processes are suitable for use as active layers in high-performance optoelectronic devices.

This research was supported by the Basic Science Research Program through the National Research Foundation of Korea (NRF) funded by the Ministry of Education, Science, and Technology (NRF-2019R1A2C1086813). Time-resolved photoluminescence and UV-Vis absorption measurements were performed at the Central Lab of Kangwon National University.