Composites constructed by combining ferroelectric and ferromagnetic materials are of significant interest owing to their multifunctional features and potential applications in multifunctional devices. Herein, the magnetodielectric effect of a composite containing ferroelectric 0.8Sr0.2TiO3 (BST) and ferrite Co0.9Ni0.1Fe2O4 (CNFO) phases is investigated. This ferroelectric and ferrite composite is synthesized using the co-precipitation method followed by microwave sintering. The tetragonal crystal structure of BST and cubic structure of CNFO are confirmed using X-ray diffraction. All composite samples are characterized using nanoparticle tracking analysis. The measurements of dielectric constant (room temperature) and loss tangent as a function of frequency show an increase in the dielectric constant with an increase in the CNFO phase. The highest value of magnetodielectric coefficient, –40.13 %, is observed for the 60BST–40CNFO composite at 100 Hz, which decreases with an increase in the applied frequency.

Multiferroic materials have attracted significant interest in recent years because of the simultaneous coexistence of two or more phases in a single material. This type of material allows the modification of electrical properties or magnetization upon the application of magnetic or electric field [1]. There are a few single-phase materials that are known to exhibit both spontaneous magnetization and electric polarization, but a low magnetoelectric (ME) coefficient at room temperature restricts the use of single-phase ME materials in many applications [2]. In contrast, composites constructed by combining ferroelectric and ferromagnetic materials exhibit high ME coefficients, and have been rapidly developed because of their multifunctional features and potential applications in multifunctional devices [2,3]. In these composites, the resulting ME coefficients are a product of coupling between the piezoelectric and magnetostrictive effects. A combination of two materials in a single material can result in new properties such as magnetodielectric and magneto-optic properties [4]. Of these, the composite materials possessing magnetodielectric properties are important owing to their useful applications in the miniaturization of devices for advanced technologies [5,6]. In ME composites, the electric polarization can be adjusted by the application of a magnetic field, whereas in magnetodielectric composites, the dielectric properties are modified upon the application of a magnetic field. Magnetodielectric coupling between ferroelectric and ferromagnetic materials is expressed in terms of magnetocapacitance () which is expressed as:


where (H) and (0) represent the magnitudes of the dielectric constant in the presence and absence of an applied magnetic field, respectively. is observed in composites with or without ME coupling. Typically, the magnitude of may be positive or negative, depending on the nature of the composite; if the composite shows high ME coupling, the value is negative [7].

Based on the aforementioned discussion, (1-x)Ba0.8Sr0.2TiO3– xCo0.9Ni0.1Fe2O4 ((1-x)BST–xCNFO) composite is prepared via hydroxide co-precipitation in this study. The effect of the application of magnetic field on dielectric properties is investigated for each composite with different x values (x = 10, 20, 30, and 40).

The syntheses of BST and CNFO were performed using a hydroxide co-precipitation method described in a prior literature report [8]. For the synthesis of highly pure BST (99.9 %), analytical reagent (AR)-grade Ba(NO3)2, Sr(NO3)2, and K2TiO(C2O4)2·2H2O were used, and to synthesize CNFO, AR-grade (Fe(NO3)3·9H2O), (Co(NO3)2·6H2O), and (Ni(NO3)2·6H2O) were used as starting materials without any further purification. KOH was used as a precipitating agent in a 1:1.6 ratio of the metal ions and KOH for the complete precipitation of ions. Both phases, i.e. ferroelectric BST and ferromagnetic CNFO, were synthesized individually. The alkaline medium was maintained using the mixture of dilute ammonia solution and distilled to prevent fractional solubility of ions; a pH value of >10 was maintained during the precipitation process. The precipitates of both phases obtained after filtration were dried overnight at 150 °C. The dried powder samples were pulverized for 3 h and calcined at 1000 °C for an additional 3 h. The calcined powders of BST and CNFO were mixed to form magnetodielectric composites with varying CNFO quantities, and these were rigorously grinded for 5–6 h for appropriate mixing. Polyvinyl alcohol (3 %) was used as a binder and mixed with the ground mixture of BST–CNFO. This was further grinded for 30 min and pressed using a hydraulic press. A uniaxial pressure of approximately 5 tons/cm2 was applied to obtain disk-type pellets that were approximately 1 cm in diameter and 2 mm in thickness. These pellets and the remaining powder of the BST–CNFO composite were sintered at 1100 °C for 30 min. A unique, fast microwave sintering technique was used for this purpose, where the heating rate was maintained at 40 °C/min. A microwave furnace with a thermally insulated chamber and 1.3 kW and 2.45 GHz multimode cavity was used.

The structures of the phases in BST–CNFO composites were confirmed using an X-ray diffractometer (Rigaku Miniflex-II, Rigaku Corporation, Tokyo, Japan). Particle size analysis of each composite was performed using a nanoparticle tracking analyzer (Version 2.3) after sonication. The pellets were used for the measurement of dielectric properties; both sides of the pellet were coated using silver paste and dried at 200 °C. To determine the frequency dependence of the dielectric constant and the loss tangent, a high-frequency LCR-Q meter (Wayne-Kerr 6300B, Wayne Kerr Electronics, Bognor Regis, UK) was used. To determine the magnetodielectric constant, the samples were placed between two magnets, and the magnetic field (up to 10 kOe) was measured using a gauss meter and adjusted using a high DC power supply.

Figure 1 shows the X-ray diffraction (XRD) data for magnetodielectric composites with increasing CNFO concentrations, obtained with 2 values in the range of 20–80° and a scan rate of 3°/min at room temperature. All observed diffraction peaks are associated with the BST–CNFO magnetodielectric composites, and no peak corresponding to an impure phase is observed. The ferroelectric phase (BST) shows a tetragonal structure with the following lattice parameters: a = 3.9763 Å and c = 4.02 Å, whereas the diffraction peaks corresponding to CNFO, which crystallizes in a cubic spinel structure with space group Fd3m, shows the following lattice parameter: a = 8.37 Å. The splitting at 2 = 66° for the (220) peak of the perovskite BST is in good agreement with the existence of the tetragonal crystal structure. The peaks for the cubic phase corresponding to CNFO are assigned using ICDD card numbers, 22-1086 and 86-2267, whereas the peaks for perovskite BST are assigned in accordance with the JCPDS card number, 00-044-0093 [8,9]. The intensity of the major diffraction peak (311) associated with the cubic spinel structure increases with an increase in the concentration of CNFO, while the diffraction peaks shift slightly toward a high angle. The crystallite size for each phase was calculated using the Scherrer equation shown below. 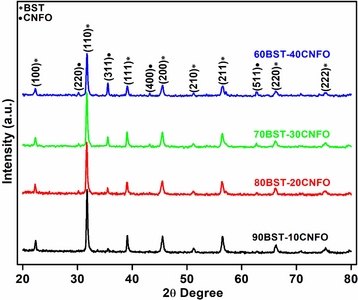 Figures 2(a)–(d) show the nanoparticle tracking analysis (NTA) results for the BST–CNFO composites with an increase in the CNFO content. Before the NTA, each composite was suspended in highly pure water and sonicated for 30 min. NTA is a useful technique that affords the size distribution profile of small particles in materials with diameters between 10 and 1000 nm. The observed mean particle size (D) for 90BST–10CNFO and 80BST–20CNFO is 42 nm, which increases to 46 nm for 70BST–30CNFO and 132 nm for 60BST–40CNFO. This increase in particle size with increasing CNFO content is in good agreement with the size measurements obtained by XRD. 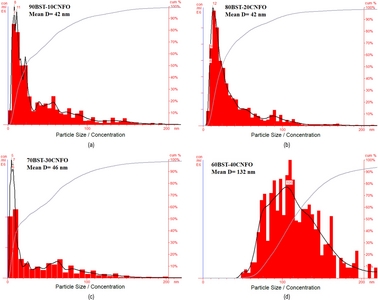 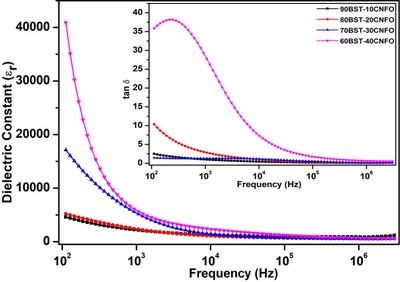 Figure 3. Frequency dependence of the dielectric constants of BST–CNFO composites. The inset shows the variation in the loss tangent with a change in frequency.


where is the capacitance, is the thickness of the pellet, 0 is the permittivity of free space (8.854 × 10-12 F/m), A is the area of the pellet, and Q is the quality factor. As shown in the figure, the value of the dielectric constant increases with an increase in the CNFO content, and all composites exhibit similar trends with change in frequency. A high value of the dielectric constant is obtained at a low frequency, which decreases with an increase in frequency and becomes almost constant at high frequency values. Different types of polarizations including interfacial, space charge, dipolar, electronic, and ionic polarizations play important roles in the dielectric dispersion and loss tangent variation with change in frequency. The dispersion at low frequency can be explained on the basis of Koop’s phenomenological theory, resulting from the interfacial polarization or Maxwell–Wagner type interfacial polarization [8,10,11]. At high frequencies, where space charge polarization is more dominant, the electrons do not follow the path of the applied frequency and no change in the dielectric constant is observed. Additionally, the dissimilar permittivities and resistivities of the ferrite and ferroelectric phases affect the dielectric dispersion [12]. The inset shows the variation in the loss tangent with the change in frequency for the magnetodielectric composites. The variation shows a similar trend as that observed for the dielectric constant, except in the case of the 70BST–30CNFO composite, where the loss tangent value is low at a low frequency. This can be owing to the inhomogeneous characteristics of the 70BST–30CNFO composite system such as porosity and change in grain structure, among others [13]. The highest value of the loss tangent is observed for the 60BST–40CNFO composite. 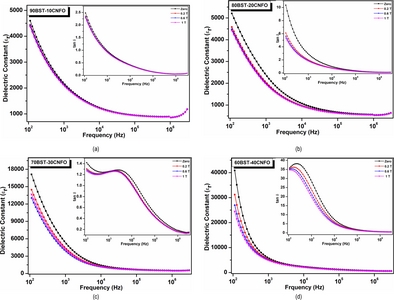