Non-radiative energy transfer occurs between donor (D) and acceptor (A) chromophores, and this is known as fluorescence resonance energy transfer (FRET). This process requires the donor emission band and acceptor absorption bands to overlap. The mechanism of FRET can be explained by considering the nature of the dipole-dipole D–A pair interaction [1]. FRET effects are widely utilized in the fields of chemistry and physics, and in biological areas such as stem cell research, as well as protein analysis, biometric applications, assays for cell research, and nucleic acid analysis [2–5]. Recent developments of FRET-based techniques involving the use of luminescent of gold nanoparticles (Au NPs) have taken advantage of the high chemical and physical stability of these particles in ambient conditions. Their plasmon resonance band matches the absorption and emission bands of several dyes [6,7]. It is possible to enhance and quench fluorophore photoluminescence (PL) by manipulating the interactions between Au NPs and ﬂuorophores [8,9]. Moreover, ﬂuorophore–Au NP interactions have been demonstrated to alter FRET systems, including by changing energy transfer efficiencies and working distances, and allowing the tuning of donor and acceptor spectra. Therefore, Au NPs are promising for many applications in drug delivery analysis, pharmaceutical research, and food technology [10–12]. The FRET process originates in dipole–dipole interactions so the D–A energy transfer is strongly dependent on the D–A distance , resulting in different energy transfer mechanisms [12].

To clarify the phenomenon of interactions between molecules, J. Perrin [1] proposed a hypothesis on the nature of the dipole–dipole interactions based on the concept of molecules , without colliding with each other when separated by distances greater than their molecular diameter. Förster provides an explicit theory that explains the quantification for transmitting non-radiant energy through the application of Fermi’s golden rule [1]. –6 [1], –4 [13] or –2 [14] are all possibilities for the dependence of the interaction energy on separation. However, the physical mechanism and computational models predicting these energy transfer mechanisms remain controversial. Recently, a “nano-wave emitter station and antenna” model was developed to explain the mechanism of FRET [15]. Strong fluorescence enhancement, which could be called gigantic energy transfer, was experimentally observed and shown to be effectively modeled by this approach. Contributions from FRET and surface resonance energy transfer (SET) to fluorescence quenching are predicted by this model, but it does not provide an explanation for fluorescence enhancement.

The Golden Rule approximation relates the energy transfer rate FRET to the electromagnetic coupling between the donor and acceptor , FRET ~ . As a simplification, the separation distances () can be considered to be solely functions of the geometric arrangement of individual dipoles. Thus, we can write ≈ 1/ 3 for individual dipoles, ≈ 1/ for a 2D dipole array, and for a three-dimensional (3D) dipole array, is constant, i.e., the power of the distance factor decreases as the number of dimensions increases [13]. A schematic of the energy transfer between a dye molecule and gold nanoparticle is shown in Fig. 1. An expression for the FRET involving two individual dipoles is easily derived: 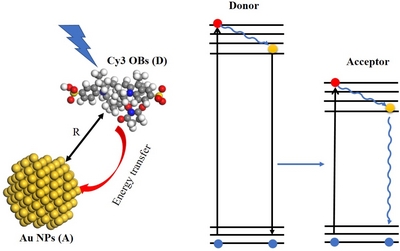 Figure 1. A schematic of the FRET between the Cy3 OBs and gold nanoparticles.


where is the D–A separation; this interaction occurs over the range of 1 nm to 10 nm. Surface resonance energy transfer (SET) is the mechanism used to describe the transfer of fluorescence energy between pigments and metallic nanoparticles, in which pigments act as donors and nanoparticles act as acceptors. The interaction distance in this case is longer, which occurs over distances of ~ 220 nm. In this interaction between a dipole and surface, the energy transfer rate can be written as [13]


The experimental testing of this Coulomb’s law model for electronic excitation transfer (EET) from a segment of polyfluorene to tetraphenyl porphyrin was reported [14]. For the electric-dipole transition, the normalized FRET rate = DA/ 0 can be calculated by using the electric Green’s function method [16, 17]:


where DA is the rate of energy transfer from donor to acceptor, 0 is the decay rate of the donor in the absence of the acceptor, is the emission frequency, is the speed of light, and D() and A() are the normalized emission spectra of the donor and acceptor, respectively. The quantum amplitude (, ) depends on the electric dyadic Green’s function , obtained using the principles of quantum electrodynamics [18]. In this model, each stimulus transmits energy through the medium of a virtual photon, a messenger particle that cannot be directly detected and which, by its creation and subsequent annihilation, electromagnetically couples the donor decay and acceptor excitation. According to Andrews [19], resonance energy transfer (RET) is mainly related to the dynamic pair ( 1, 1), such as electric dipole transitions in both donor and acceptor. The unified theory of energy transfer for calculating the energy transfer process is an equivalent approach. The interaction between ( 1, 1) dynamic pairs was proposed by Andrews to calculate the transfer function for the interaction [19]. From that work, we can obtain the interaction intensity expression in the form


where is the orientation factor and A and D are the electric dyadic Green’s functions for the acceptor and donor, respectively.

The first term of Eq. (5) describes the conventional Förster –6 distance depending on the virtual photon, while the third term is a Coulomb’s law ( –2) term and the second term has a –4 dependence. Equation (5) describes resonance energy transfer mechanisms, including FRET, SET, and CET. It follows that we might assume that the contributions of the three terms in Eq. (5) correspond, in turn, to the three mechanisms FRET, SET, and CET.

Because the absorption spectrum of Au NPs is broad, the entire spectrum contributes to the resonance energy transfer. In experiments on Au NPs involving surface plasmon effects, it is necessary to consider a model of RET that includes the effects of Au NP concentration to investigate fluorescence enhancement and quenching.

For simplicity, we consider the average value of the D–A distance. Equation (5) is rewritten as follows:


Then, we can obtain


where , and are constants.

rom Eq. (8), assuming linear optical conditions, that is a constant, and ( A D)2 ~ , we can write an expression for the fluorescence intensity as

To rationalize experimental fluorescence enhancement results, we propose a model based on Eq. (10) with the conditions < 0, < 0, and > 0. These conditions for the values of the coefficients and coincide with the rules presented by other authors who have studied 20-nm gold nanoparticles [17]. Note that regarding the condition for the value of , we hope that this will be a quantitative proof for the enhancement of fluorescence. Using the proposed theoretical model, we re-examined the experimental results from a study of energy transfer between OBs and Au NPs [15]. The RET between the OBs and Au NP pairs results in initially enhanced fluorescence, as shown in Fig. 2. We compared the proposed calculation model with the experimental data and obtained the parameter values = –6.12 × 10–5, = –0.0023, = 0.0786, and 0 = 10.37. The trend of changing the RET between the OBs and Au NPs pairs is quite appropriate both about the theoretical and empirical models. As shown in Fig. 2, the intensity of the fluorescence depends on the Au NP concentration . In particular, for small values of , the fluorescence intensity increases gradually, being maximized at = 63.48 mL–1 ( max = 37.2), and decreases as increases further. According to this model, the three values , , and are typical of the three fluorescence resonant energy transfer mechanisms, FRET, SET, and CET, respectively. The magnitudes of these values correspond to the relative amounts of each mechanism contributing to the FRET. The sign, (+) or (–), indicates the enhancement or quenching, respectively, of the fluorescence in the presence of the Au NPs. Thus, the FRET and SET mechanisms contribute to fluorescence quenching, which is consistent with work in the literature [20], and fluorescence enhancement occurs solely via CET [15]. To date, no theoretical explanation has been definitively provided for this effect. 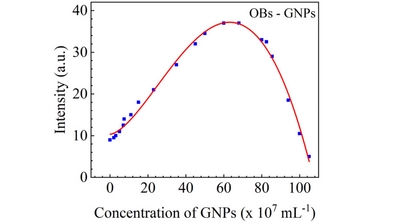 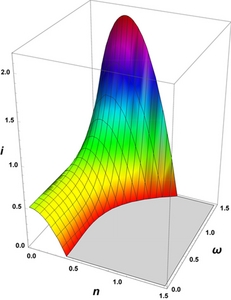 To estimate the contribution rate of each of the energy transfer mechanisms, we calculated the dependences on the average distance ⟨⟩ and frequency of the CET/FRET and SET/FRET fluorescence intensity ratios, which are defined C/F and S/F, respectively, as shown in Fig. 4. The results show that the contributions of the energy transfer mechanisms are strikingly different. The CET mechanism has a significant contribution to the RET process at high frequencies, as shown in Fig. 4(a). The ratio strongly increases with frequency when ⟨⟩ is between 0.4 and 1.0. Whereas the SET mechanism has also a significant contribution at the medium frequencies, but this contributes is negligible at the high frequencies, as depicted in Fig. 4(b). The slope of the S/F curve is smaller than that of the C/F curve, meaning that the CET fluorescence intensity is higher the SET fluorescence intensity at the same frequency and distance. In addition, these results indicate that the contribution to the RET process of the CET mechanism is much more significant than that of the SET mechanism at high frequency and distance.

Figure 4. The ratio of the fluorescence intensity of (a) CET and FRET, (b) SET and FRET contribution

In summary, a model for the energy transfer between OBs and varying concentrations of Au NPs was demonstrated in this work. It was found that the fluorescence intensity, computed as the efficiency of the resonance energy transfer, increases gradually with the Au NP concentration , when < 63.48 mL–1 and decreases when > 63.48 mL–1, with a maximum occurring at = 63.48 mL–1. In addition, this model allows the contributions of three energy transfer mechanisms, FRET, SET, CET, to be obtained via three parameters, , , and , respectively. The contributions of the three energy transfer mechanisms change with the AuNP concentration. FRET and SET contribute to the fluorescence quenching process, whereas CET contributes to fluorescence enhancement. This result will provide critical information for the thermal calculations for studies, facilitating the elucidation of the mechanisms of interaction between biological molecules.

This work was supported by the Foundation for Science and Technology of Hue University (Grant No. DHH2018-04-83).