Recently, the demand for portable touch-screen panels (PTSPs) in portable electronic devices has drastically increased. Therefore, transparent conducting oxides (TCOs), which possess high electrical conductivity and high optical transmission in the visible wavelength region, are being increasingly used. Indium tin oxide (ITO) is a typical TCO that is widely used for applications requiring good electrical conductivity, such as organic light-emitting devices, photovoltaic devices, and portable electronic devices [1–9]. Multi-component oxides with various dopants such as binary and ternary oxides of indium zinc oxide (IZO), aluminum zinc oxide (AZO), and fluorine-doped tin oxide (FTO) have been proposed as TCO alternatives to ITO. Some of them are also being partially commercialized [10–13]. These TCOs are expected to possess low electrical resistance and high transmission in the visible wavelength region to fabricate TSPs of outstanding image quality with a good and fast response to the input signal. Moreover, the TCOs should also be durable to facilitate operation under external impact and prolonged frigid conditions, allowing them to be employed in the manufacture of smart electronic devices with transparent heating and variable color functionality of the window. FTO is a potential candidate for a TCO because its visible transmission and electrical conductivity are comparable to those of ITO.

ITO is typically used in transparent conductive films, but there is a limit to its use for flexible solar cells or dye­sensitized solar cells because of its low resistance to acid. However, FTO has excellent resistance to acids, low electrical resistance, and high optical transmittance, making it a substitute for ITO. Further, unlike the film deposited by the sputtering or evaporation method, the film deposited by ECR metal-organic chemical vapor deposition (MOCVD) has excellent adhesion between polyethylene terephthalate (PET) substrates and the deposited FTO layer due to anchoring. The anchoring effect was studied previously by examining the deposition of Cu film using ECR MOCVD [14]. In addition, the ECR MOCVD method can be used at temperatures below 80 ℃; thus, it can be applied to polymer substrates through a low-temperature process. FTO is typically used as the electrode material in dye-sensitized solar cells (DSSCs) and smart windows due to its corrosion resistance against acid [15]. FTO exhibits a wide range of band gap energy depending on the concentration and composition of the dopant material. It also exhibits a high optical transmittance of 92 % in the visible range of 400-700nm, and a low electrical resistivity of 5.7 × 10-2 Ω cm [12,16]. FTO requires a specific low-temperature process that is used for depositing a low-melting-point metal oxide on a PET film via MOCVD. For this, the ECR plasma system is the most suitable.

In this study, an ECR system was designed from simulation data with linear microwaves of frequency 2.45 GHz and an electromagnetic field distribution of 875 G, and the characteristics of the deposited FTO film were studied.

It is important to design an electromagnet that can provide a uniform electromagnetic field and microwave-induced intensity at the substrate surface to form a large-scale ECR plasma system. Therefore, we used a microwave system composed of a dual-type microwave generator and microwave guide. As shown in Fig. 1, the large-scale ECR plasma system consists of two parts, namely the dual microwave generator and the electromagnet. Microwaves of 2.45 GHz were introduced into the plasma chamber through a copper antenna of low electrical resistance in a 4 cm diameter quartz tube. The central portion of each rectangular electromagnet was hollow to facilitate the formation of a uniform electromagnetic field. The plasma chamber and reactor for ionization and decomposition of the reactants were double-walled and contained a cooling jacket of dimensions 85 cm × 17.5 cm × 51 cm. The plasma chamber was located near the central portion of the rectangular electromagnets. Ar and tetra methyl tin (TMT) were used as the flow gas and metal organic (MO) source, respectively. For FTO deposition, the base pressure was maintained at 2.0 × 10-6 Torr using three turbo-molecular pumps; the temperature of the canister with TMT was maintained at ­5 ℃. O2 was used as the reaction gas with a supply rate of 50 sccm. The vapor pressure of TMT in the canister was kept constant at 65 Torr for deposition of a certain thickness. CF4 gas was supplied at a rate of 3 sccm for doping of Fluorine and was premixed with reaction gas to be supplied to the reactor. During the FTO deposition, the working pressure was maintained at 1.0× 10-3 Torr. The uniform deposition of the FTO film is affected by the uniformity of the reaction gas supplied. In the ECR MOCVD process, the source injection affects the flow pattern of the fluid in the vacuum process, which can change the uniformity of the deposited film. The nozzle used in this experiment was tested and optimized using three previously known types of nozzles [18].

Figure 1. (a) 3D image and (b) side view of the large-scale ECR MOCVD plasma system with linear microwave and electromagnet.

The plasma gas and reactive gas were introduced by a linear nozzle of width 62.5 cm. The nozzle had holes of diameter 0.05 cm, which were approximately 1 cm apart on the 0.64 cm tube. The nozzle was placed at a suitable distance from the main drum. PET film was used as the substrate. An FTO film was deposited on a roll of PET film of width 50 cm and length 250 m. The line speed of the main drum was 0.1 and 0.3 m/min. The main drum coiled with the PET film was located for the deposition with uniform electromagnetic field and microwave-induced intensity at the substrate surface. The PET film was designed to pass through the center of the main drum. Figure 1(b) depicts a schematic of the side view of the ECR plasma system. Three turbo-molecular pumps were installed to facilitate a uniform distribution of the flow gas around the substrate and the exhaust gas between the ECR plasma generators.

A magnetic simulator consisting of a communications program for the transfer of data and a current controller with power supply was employed to design the large-scale electromagnet. The electromagnetic field simulations were measured by a gauss meter (Tesla Gauss meter TM701) equipped with an electromagnetic detector probe and jig for various coordinates. Electromagnetic fields were measured 0.5 cm apart up to x = 50 cm, y = 12 cm, and z = 20 cm from the center of the electromagnet. The measured data was written in xyz contour using Origin software. The optical and electrical properties of the FTO thin film deposited on the PET film by the large-scale ECR plasma system were analyzed with varying electromagnetic currents and line speeds for deposition. To compare the optical and electrical properties, FTO thin films were deposited under the same pressure, microwave power, flow rate of carrier gas, and metal organic source gas conditions. 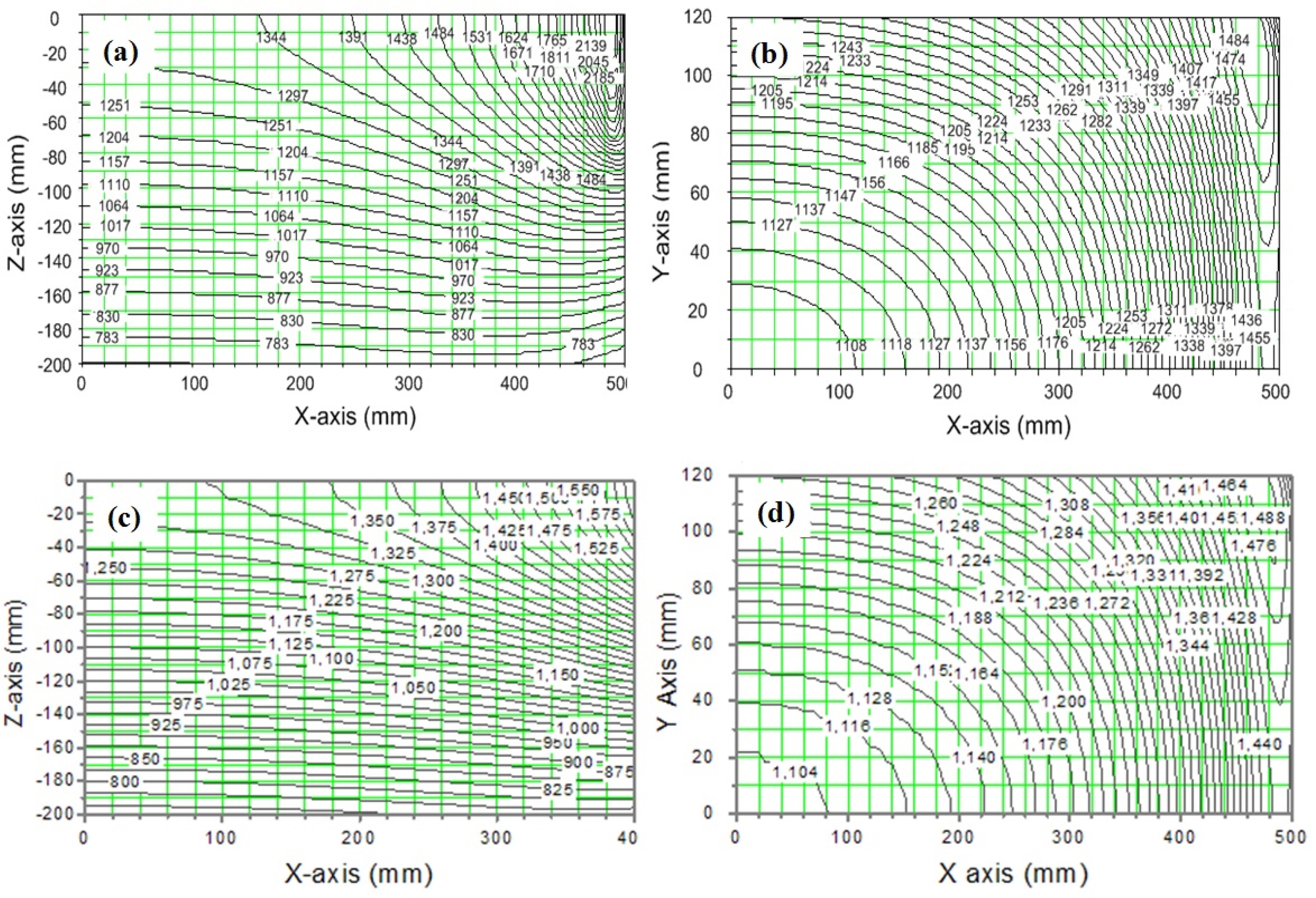 Figure 3. Comparison of (a), (b) simulated and (c),(d) measured total magnetic field (Gauss) distribution contour in the xz-plane, y = 0. 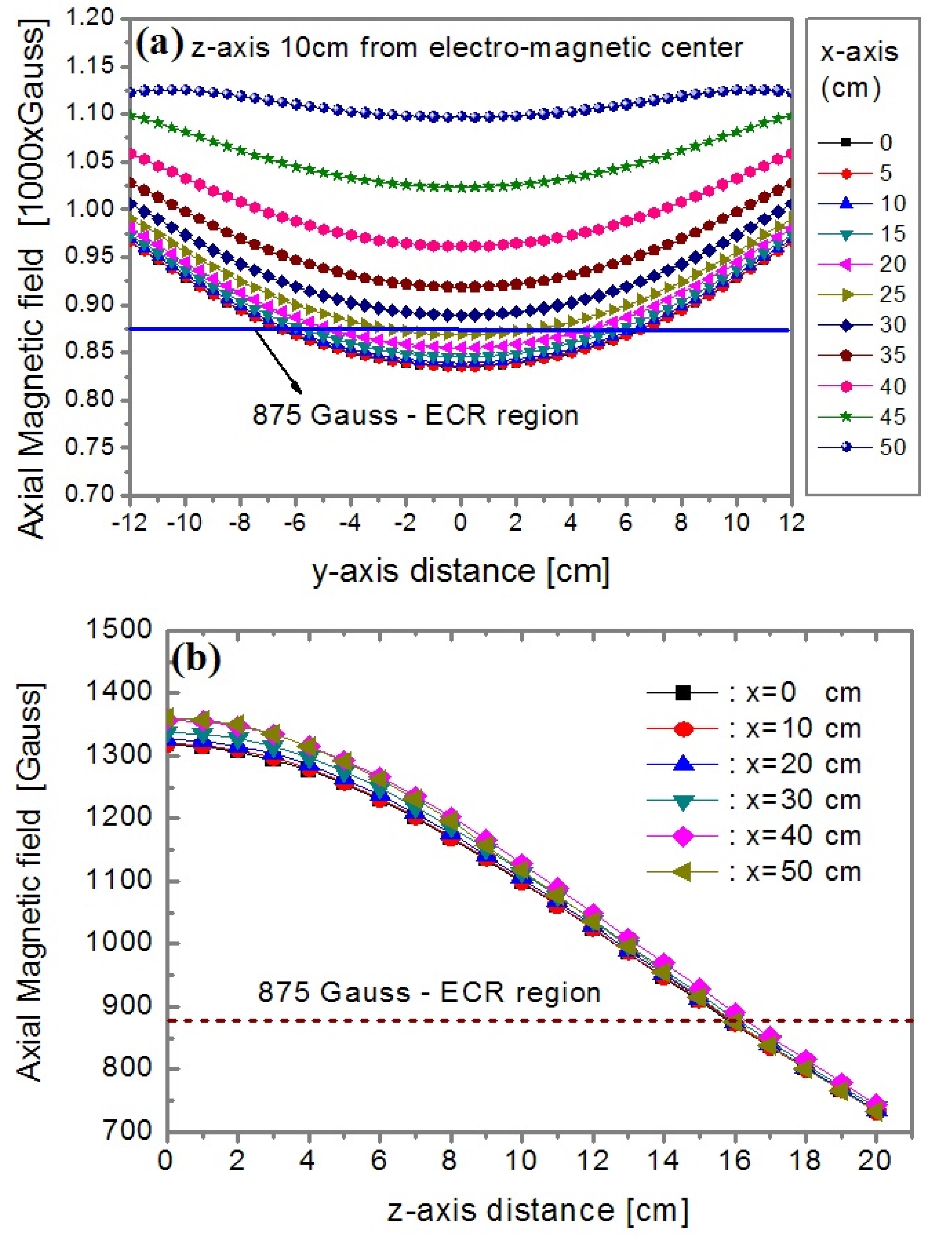 Figure 4. Magnetic field distribution with (a) y-axis (electromagnetic width) and (b) z-axis. 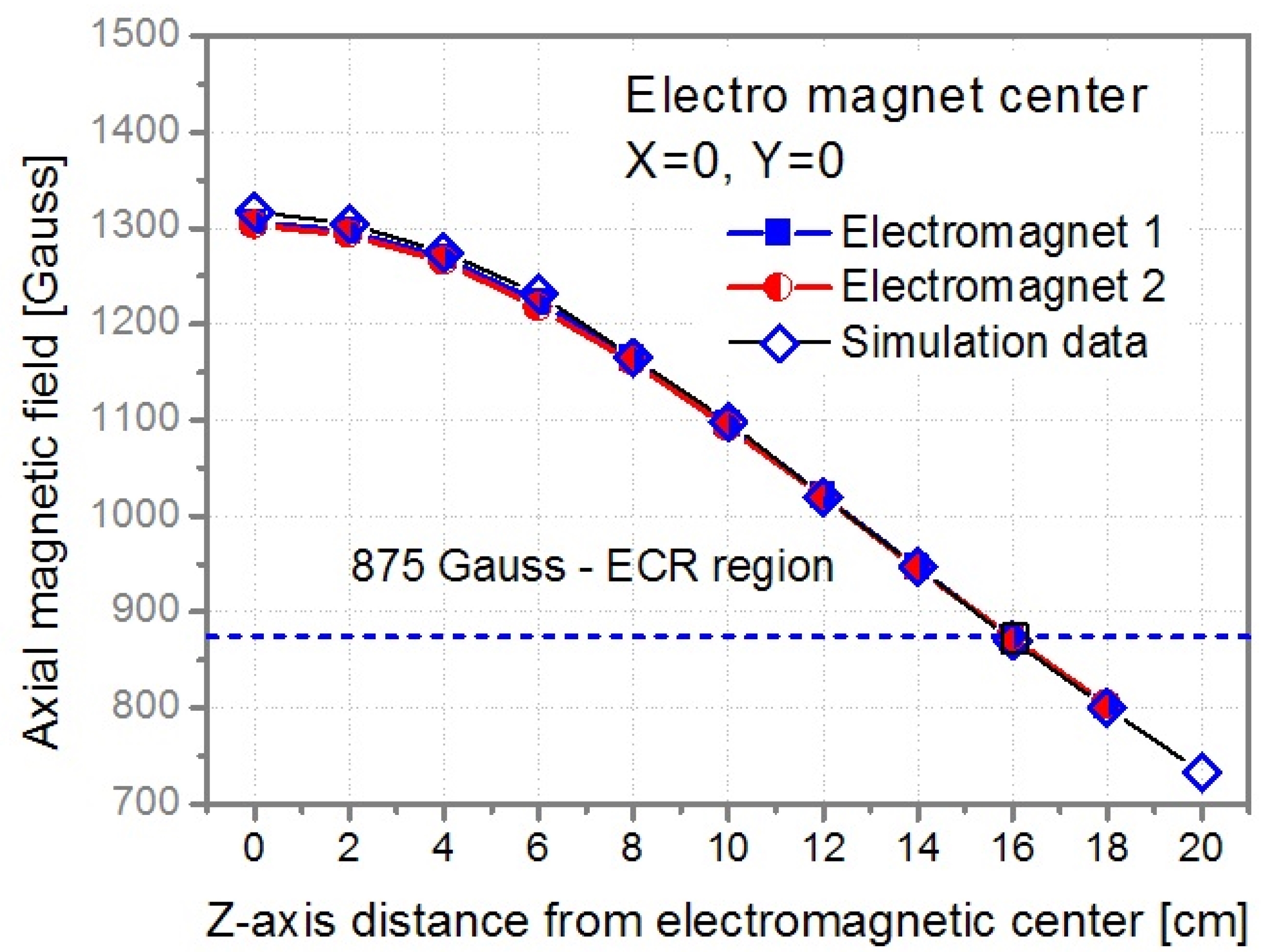 Figure 5. Comparison of magnetic field along the z-axis and ECR zone in the designed electromagnet 1, 2. 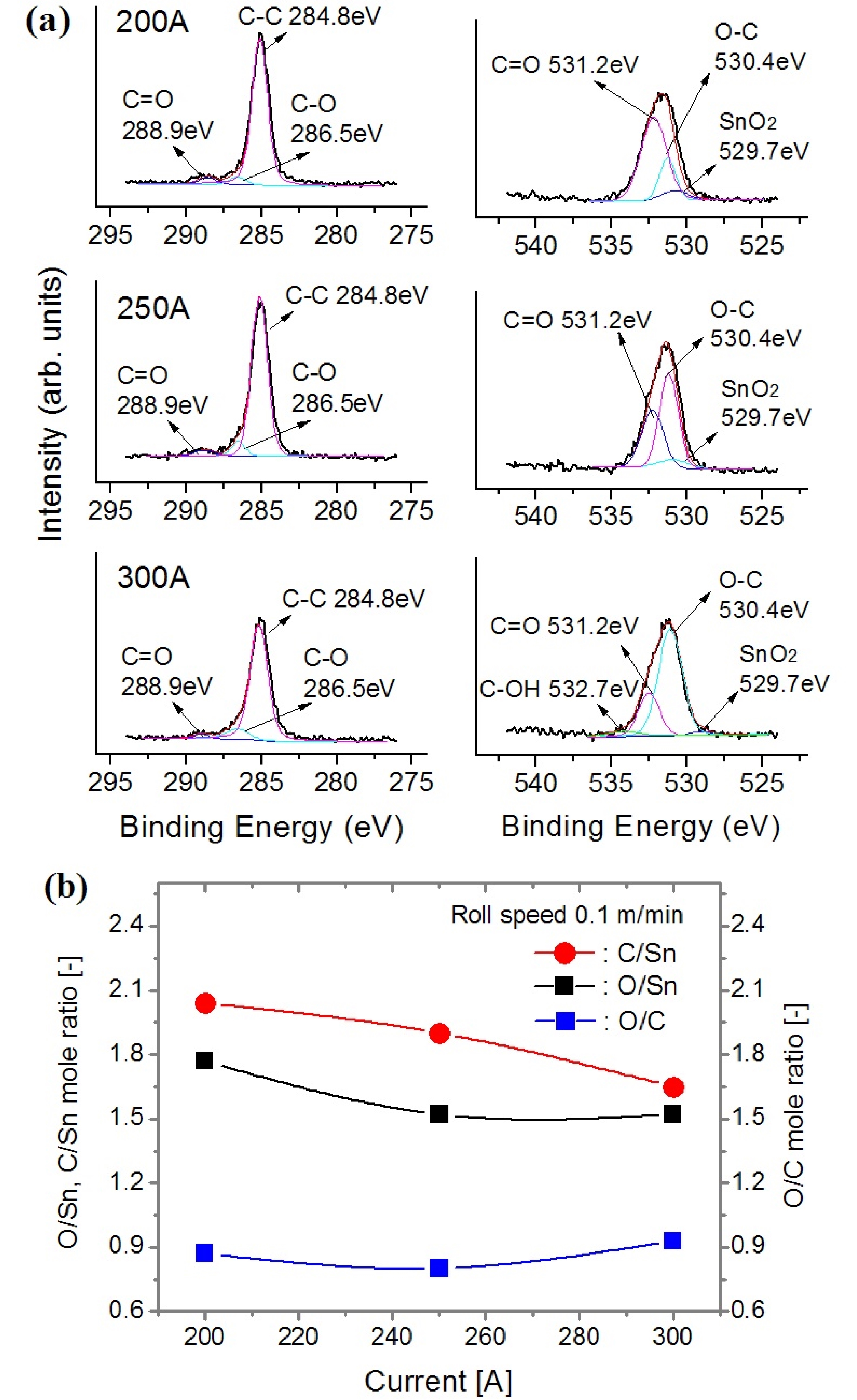 Figure 6. (a) XPS spectra and (b) mole ratio of deposited FTO film with input electromagnetic current. 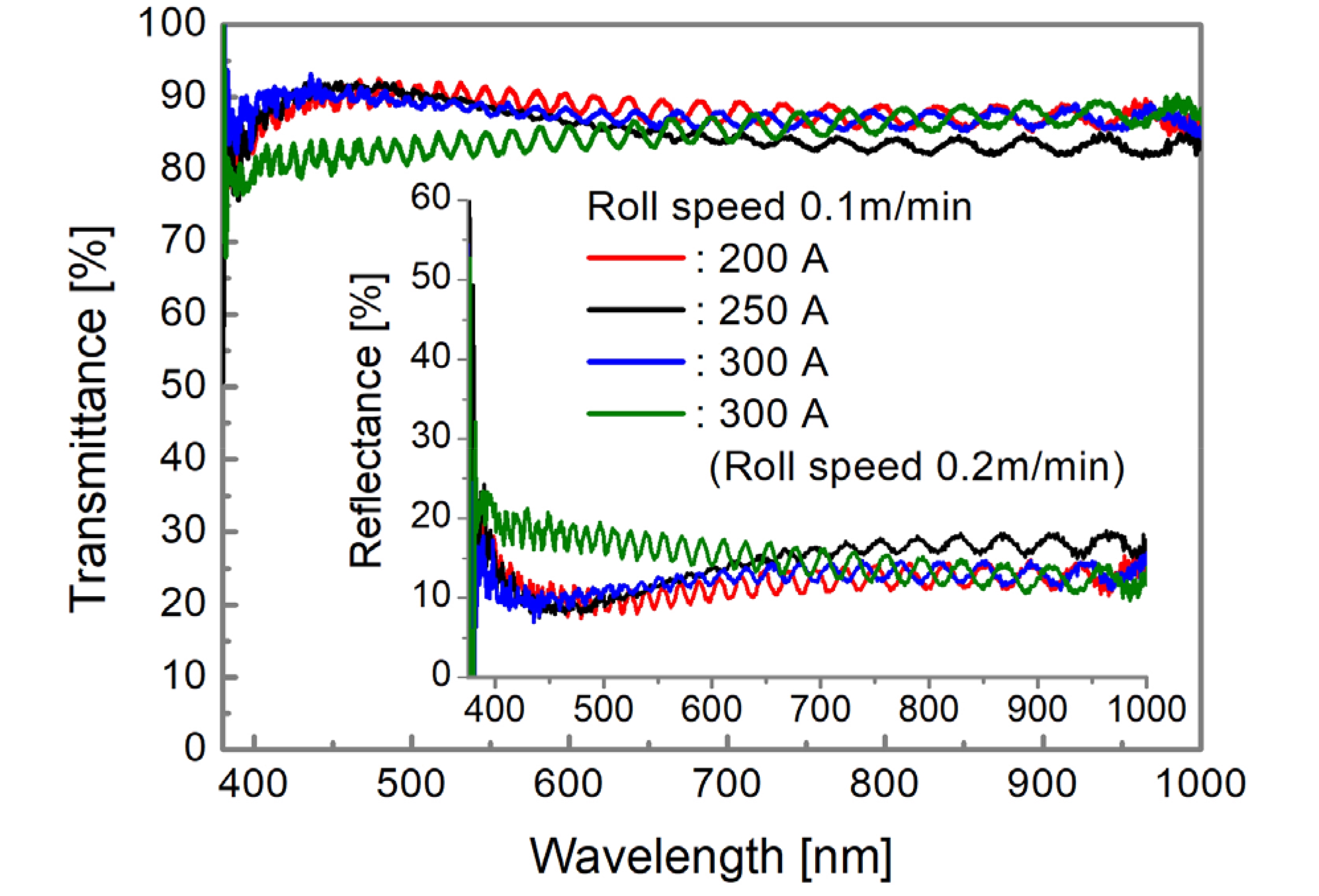 Figure 7. Optical transmittance and reflectance of the deposited FTO film with the electromagnetic input current.

Figure 8 shows the thickness of the FTO film deposited under 250 and 300 A conditions and the SEM image of the surface. An ionized ion is formed by the resonance of an electron cyclotron of an O2 gas supplied to the ECR area at a distance of more than 15 cm from the substrate under conditions of 250­300 A. Oxygen ions activated by the gas phase decomposition with reaction gas TMT from the nozzle and Sn ions formed FTO film. The thickness of the film decreased at the same deposition time as the current flowing through the electromagnet increased due to the formation of the dense film. Surface morphology looked similar from the shape of grains present on the surface for synthesis condition of currents of 250 and 300 A, but grain appeared to be smaller for that deposited at 300 A. This is thought to be caused by the slight movement of the ECR zone towards the substrates by high current and the high energy of the active species by plasma density. 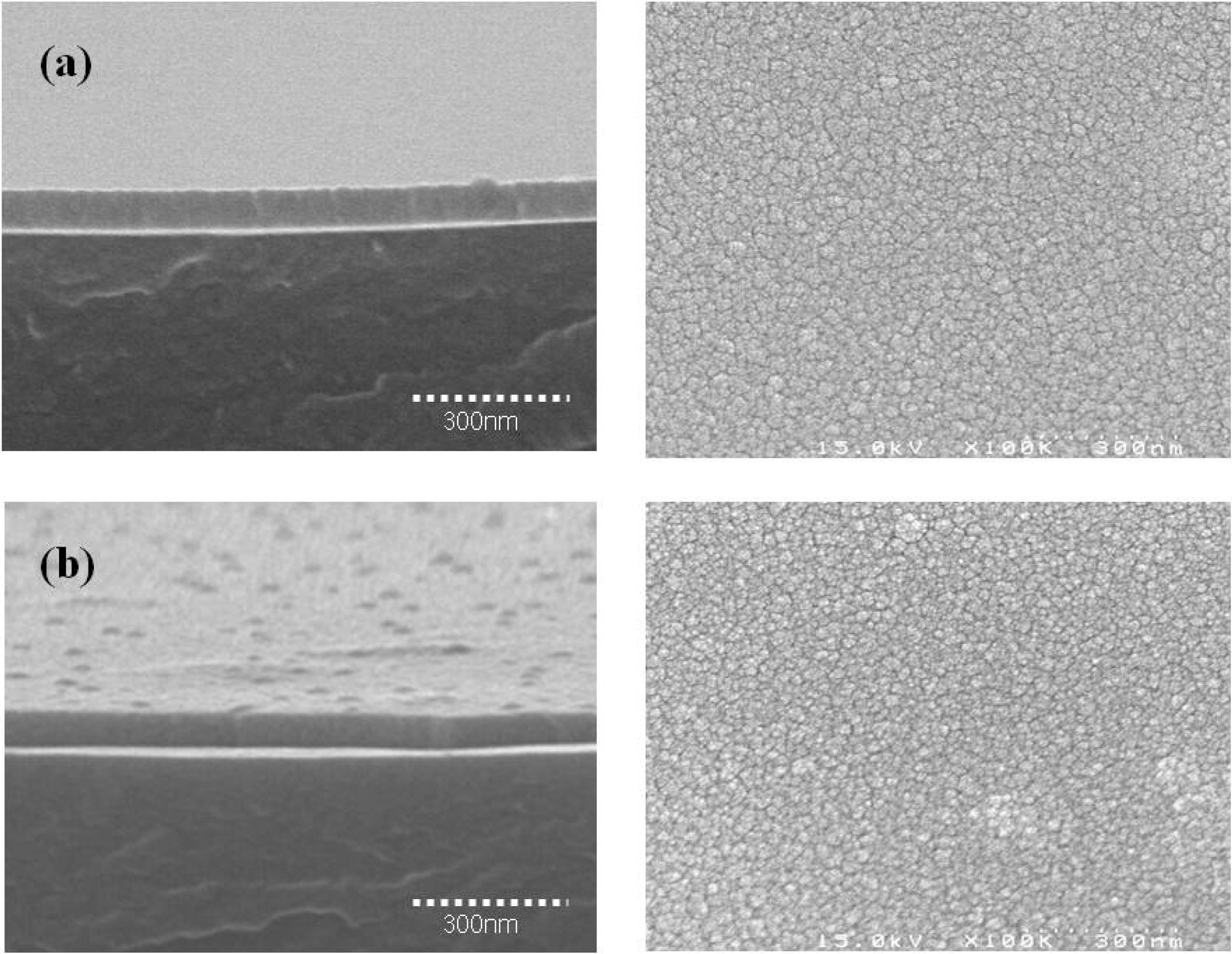 Figure 8. SEM images of cross-section and surface morphology at the electromagnetic input current (a) 250 A and (b) 300 A. 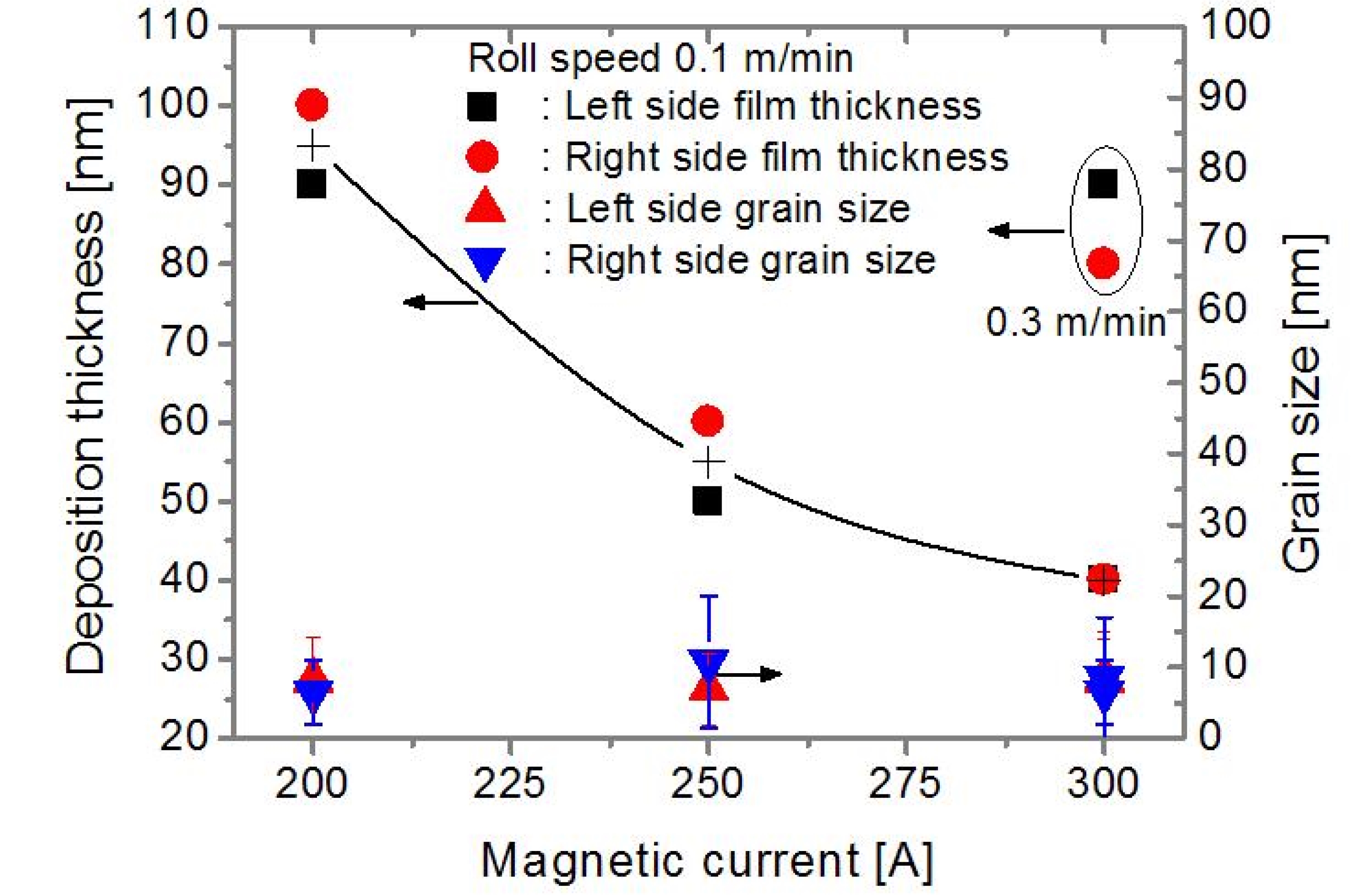 Figure 9. Deposition thickness and grain size from surface morphology of the deposited FTO film with the electromagnetic input current. 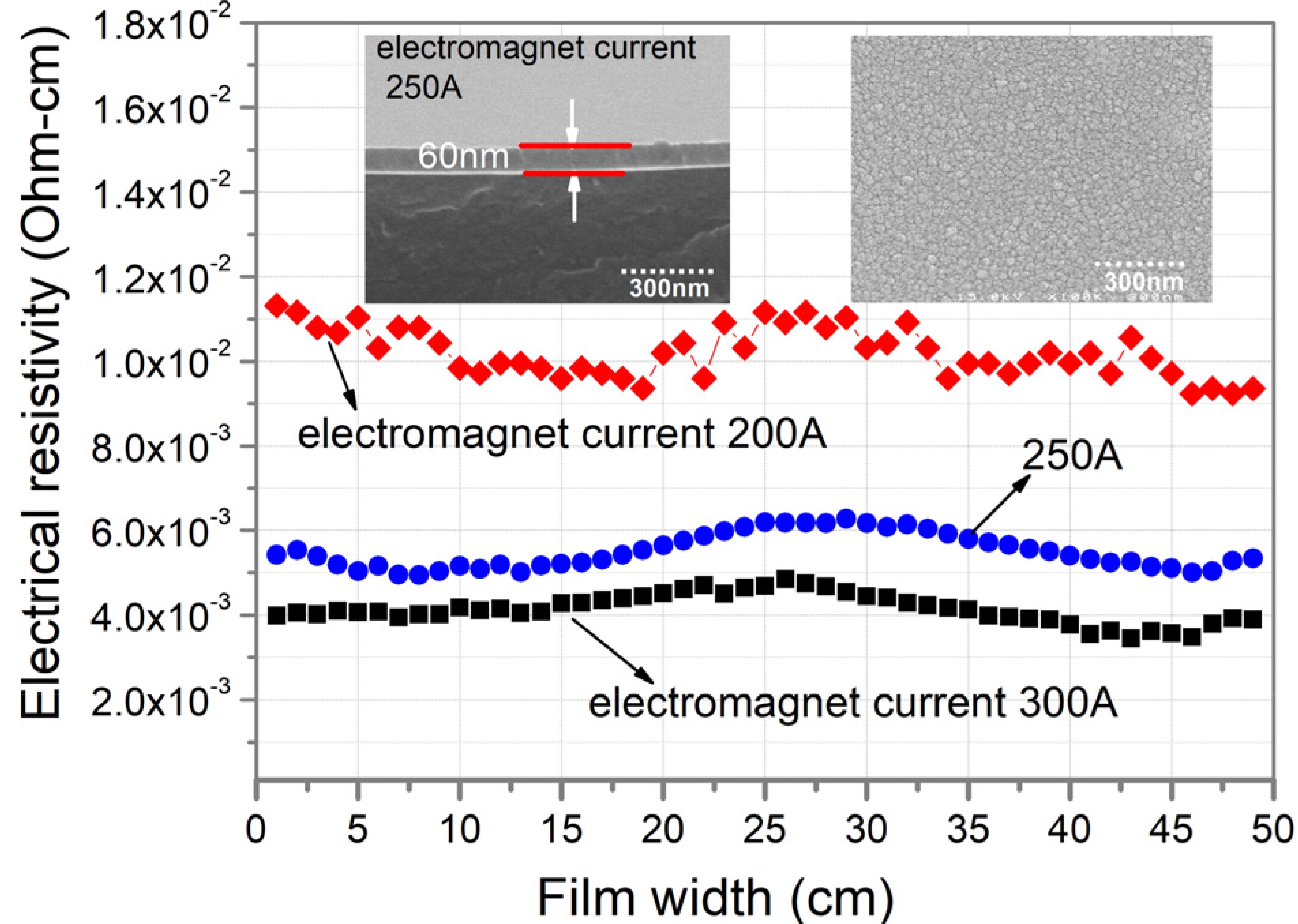 Figure 10. Surface resistance distribution with film width (x-axis) as a function of the input power magnetic field and SEM images of the cross-section and surface.

This research was supported by the Small and Medium Business Administration (SMBA).