The effect of sputtering parameters on molybdenum disulfide (MoS2) films synthesized by radio frequency (RF) magnetron sputtering and electron-beam irradiation (EBI) was examined. Raman spectroscopy and atomic force microscopy were performed to investigate the structural properties of synthesized MoS2 films. The crystallinity of as-deposited MoS2 films increased with RF power, and the number of atomic layers of EBI-treated MoS2 films decreased as working distance and pressure increased. In addition, the atomic rearrangement and the change in surface morphology induced by EBI treatment were confirmed. Finally, the layered structure of EBI-treated MoS2 films was investigated through transmission electron microscopy. As sputtering parameters play an important role in the synthesis of MoS2 films, this report will contribute to the large-area fabrication of MoS2 films in future.

In the preparation of two-dimensional (2D) materials, large-area fabrication has been extensively investigated to replace the con- ventional scotch tape method. Among 2D materials with excellent mechanical and electronic properties, transition metal dichalcogenides (TMDs), whose band gap is in the ultraviolet–visible–near infrared light range [1,2], have been highlighted as next-generation optoelectronic devices. In particular, as molybdenum disulfide (MoS2) is a naturally abundant material and its physical properties have been studied for lubrication [3], MoS2 has the potential to be readily applied to optoelectronic devices.

In this work, we demonstrated the effect of sputtering parameters on MoS2 films synthesized by radio frequency (RF) magnetron sput- tering and electron-beam irradiation (EBI). MoS2 films were deposited at different RF powers, working distances, and working pressures. Then, EBI treatment was applied on as-deposited MoS2 films to induce atomic rearrangement. The EBI parameters for inducing atomic rearrangement were derived from our previous reports [19]. The structural properties of synthesized MoS2 films were characterized through Raman spectroscopy and atomic force microscopy (AFM). Raman spectroscopy confirmed the change in crystallinity and the number of atomic layers according to sputtering parameters. After EBI treatment, the surface of MoS2 films remained flat and smooth. Finally, transmission electron microscopy (TEM) showed six to eight atomic layers of MoS2 arranged in a layered structure. As EBI treatment provides low-temperature and large-area fabrication and is compatible with sputtering, we believe that our results extend the overall understanding of the sputtering process and the preparation of MoS2 films.

First, MoS2 thin films were prepared on SiO2 (100 nm)/Si wafers by utilizing an RF magnetron sputtering system (Infovion Inc., Seoul, Korea), as shown in Fig. 1. A MoS2 target with a purity of 99.99 % and a diameter of 5.08 cm was used. An RF power of 5 60 W, a working distance of 11–18 cm, a working pressure of 1–10 mTorr, and a deposition time of 2 min–2 h were used as sputtering parameters. The ault values for R power, working distance, working pressure, and deposition time were 20 W, 13.5 cm, 5 mTorr, and 5 min, respectively. After the deposition of MoS2, EBI was applied in the same chamber of the RF magnetron sputtering system. A DC power of 1 kV, an RF power of 300 W, a working pressure of 0.8 mTorr, a working distance of 7.5 cm, and a process time of 1 min were used for EBI treatment. There was no additional heating during sputtering and EBI treatment. 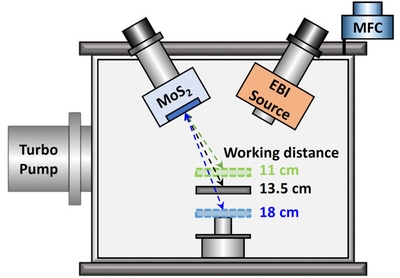 Raman spectroscopy (alpha300 S, WITec GmbH, Ulm, Germany) was performed to investigate the properties of MoS2 films synthesized under different sputtering and EBI parameters. A laser wavelength of 532 nm was used for excitation, and a grating with 1800 grooves/mm was utilized. AFM (alpha300 S, WITec GmbH, Ulm, Germany) was applied over an area of 5 × 5 μm2 to characterize the surface of synthesized MoS2 films. The accelerating voltage for scanning electron microscopy (SEM; JSM-6700F, Jeol, Akishima, Tokyo, Japan) was 10 kV. The samples for TEM (JEM-2100F, Jeol, Akishima, Tokyo, Japan) were prepared via focused ion beam milling. The accelerating voltage for TEM was 200 kV.

Raman spectroscopy is a versatile method for analyzing the crystallinity [19,20], strain [21], vacancy [22], and number of layers [13] of TMDs. These characteristics can be distinguished through various changes such as the blue shift, red shift, transition, and increase and decrease in the Raman intensity. The crystal structure of MoS2 after EBI treatment was examined by analyzing the two typical Raman peaks of MoS2, i.e., E1 (in-plane) and A1g (out-of-plane) [23]. Based on preliminary information, the main sputtering parameters were adjusted to evaluate the change in the properties of the film. We primarily used Raman spectroscopy because it is nondestructive and requires simple sample preparation and analysis.

Figure 2 shows the Raman spectra of as-deposited MoS2 films synthesized at different RF powers and deposition times. As RF power increased, the two typical Raman peaks of MoS2 appeared more clearly. At an RF power of 5 W, the Raman peaks were not observed even for a deposition time of 1 h. However, at an RF power of 60 W, the E1 and A1g peaks were strongly observed at ~380 and 405 cm-1 [24], respectively, for a deposition time of 2 min. The number of atoms sputtered from the target increase with RF power; this increases the deposition rate. In addition, as sputtered atoms reach the substrate with higher kinetic energy, they have sufficient energy to form crystalline structures [14]. In contrast, the sputtered atoms with lower kinetic energy form amorphous structures. We considered working distance, working pressure, and RF power because these parameters are related to the kinetic energy of sputtered atoms. 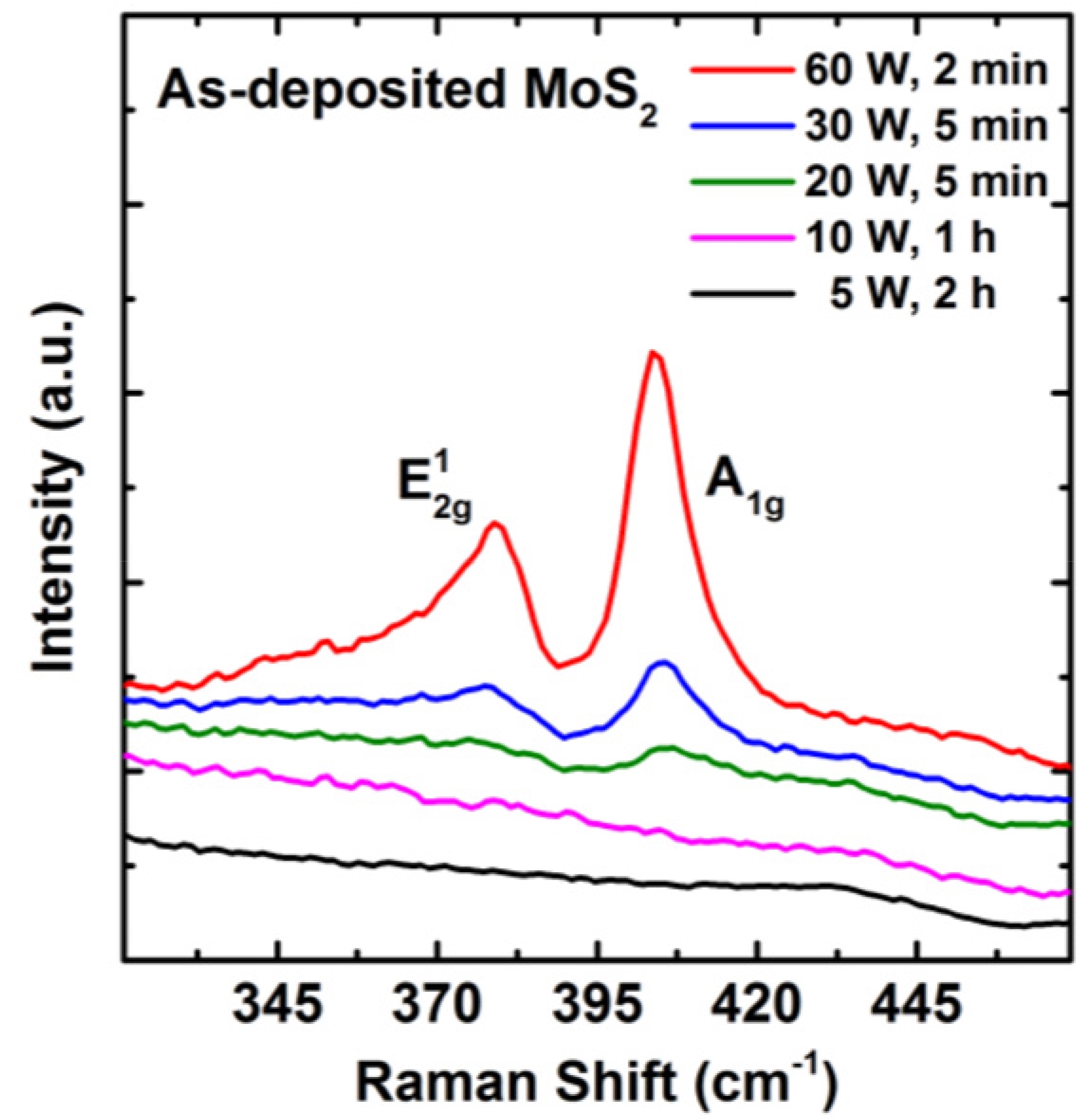 Figure 3 shows the Raman spectra of as-deposited and 1 kV EBI-treated MoS2 films sputtered at working distances of 11.0, 13.5, and 18.0 cm. As shown in Fig. 1, as-deposited MoS2 films exhibited extremely weak Raman peaks, indicating an amorphous state [20]. However, after EBI treatment, the intensity of Raman peaks increased remarkably, which indicated the atomic rearrangement induced by EBI [8]. For EBI-treated MoS2 films, the differences between the positions of the E1 and A1g (Δ) peaks were 27.1, 25.9, and 25.9 cm-1 for working distances of 11.0, 13.5, and 18.0 cm, respectively. The value of Δ for a bulk MoS film with six or more atomic layers is 24– 27 cm-1 with Δ [7,13,20]. The intensity of the Raman peaks slightly decreased with working distance, which indicated a decrease in the amount of Mo–S bonding [12]. The possibility of scattering increases with working distance; this decreases the deposition rate. 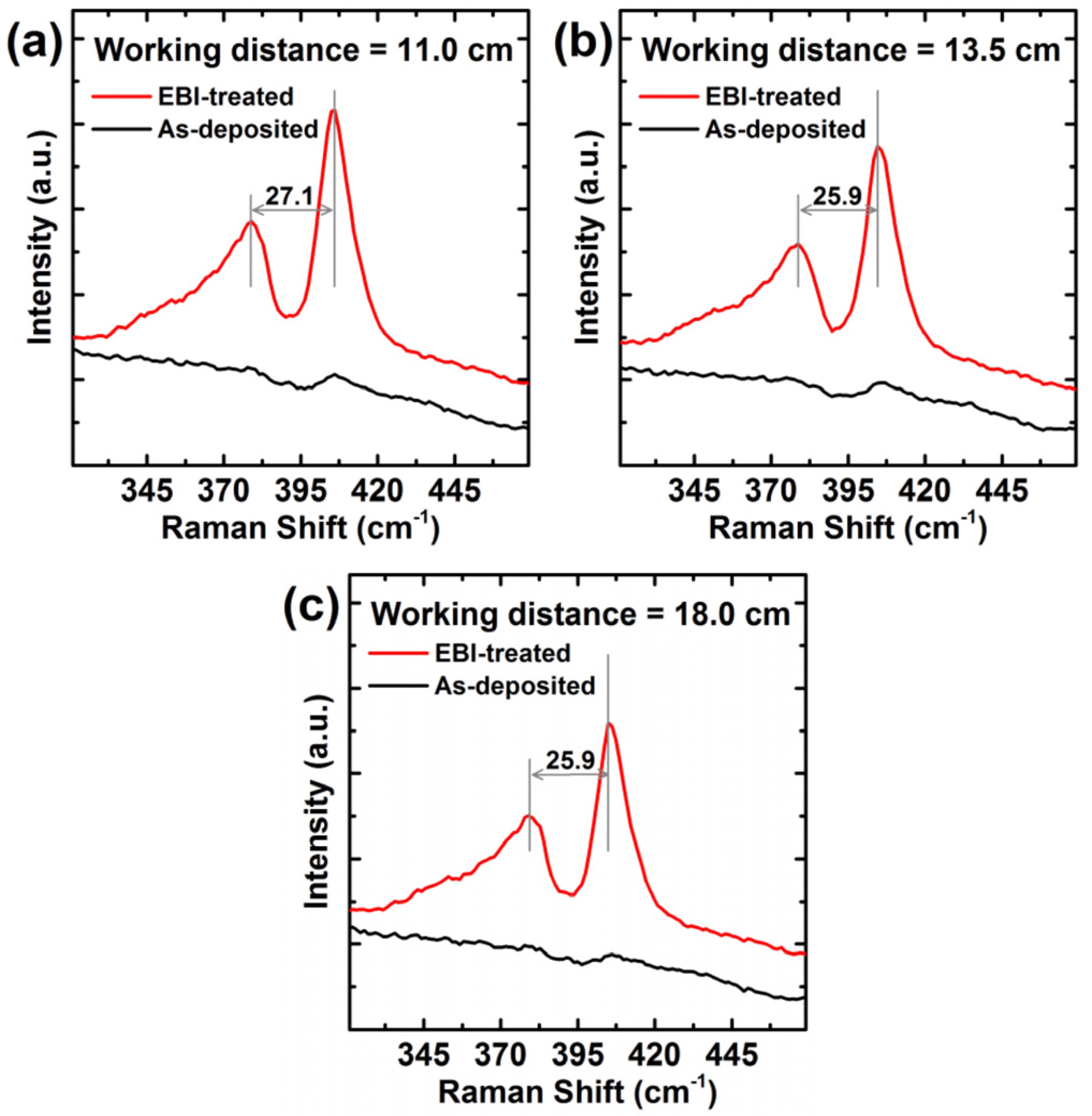 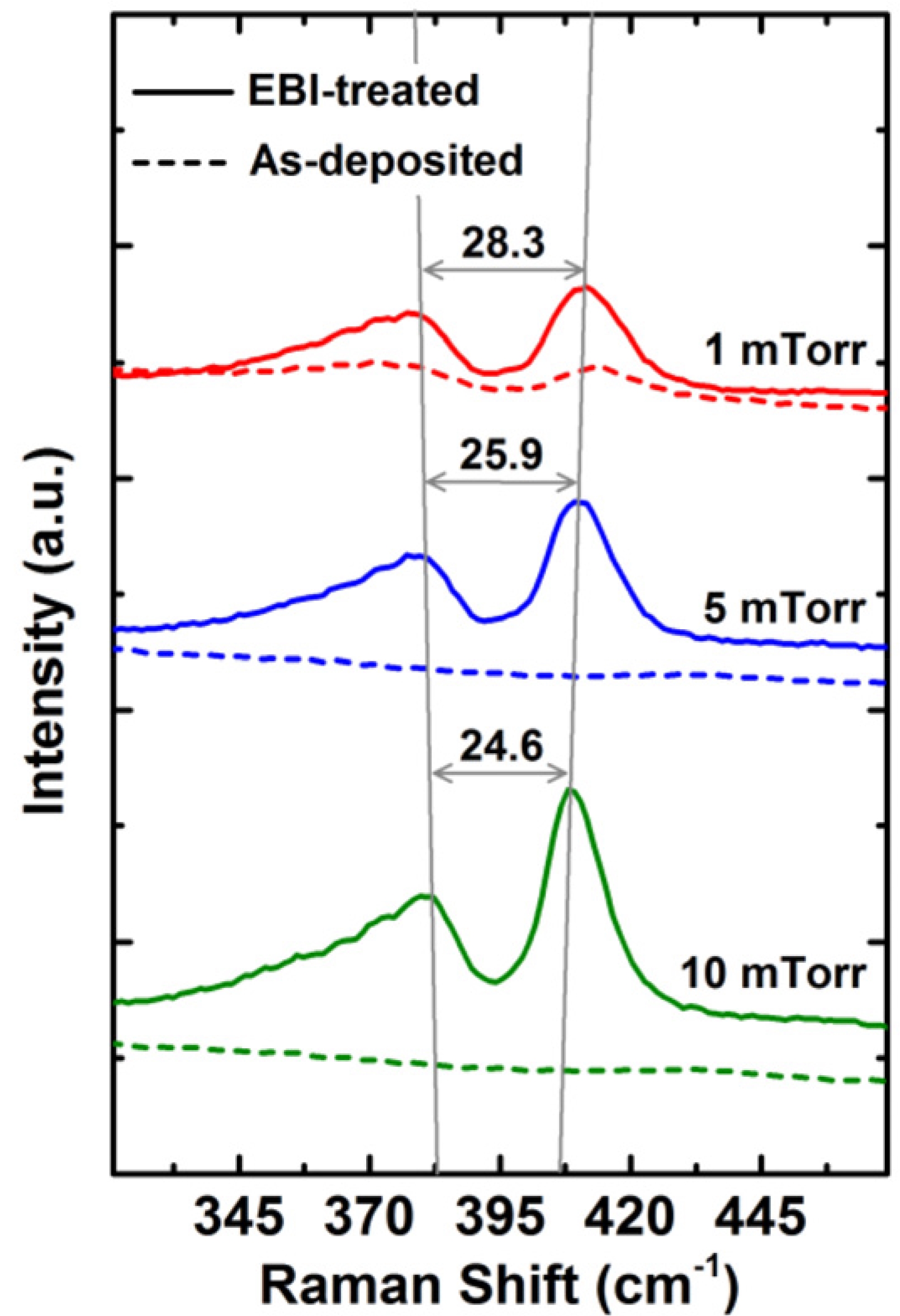 The surface morphology of as-deposited and 1 kV EBI-treated MoS2 films sputtered at different working pressures is shown in Fig. 5. AFM was carried out over an area of 5 × 5 μm2; all scale bars in Fig. 5 represent 2 μm. The average roughness (Ra) of the SiO2/Si wafer was 0.520 nm. The surface of the as-deposited MoS2 films was extremely flat and smooth, similar to the wafer. Ra was 0.515, 0.526, and 0.532 nm for working pressures of 1, 5, and 10 mTorr, respectively. After EBI treatment, Ra increased to 0.619, 0.646, and 0.671 nm for working pressures of 1, 5, and 10 mTorr, respectively. As the atomic rearrange- ment induced by EBI treatment changed the microstructure of MoS2 films, the roughness of the surface increased slightly; however, it was still flat and smooth. The increase in roughness caused by EBI treat- ment is less compared to other post treatments [20,24]. The roughness of each layer is a critical factor in sputtered films [25]. The properties of sputtered films can be expected to become more ideal as layers become flatter. 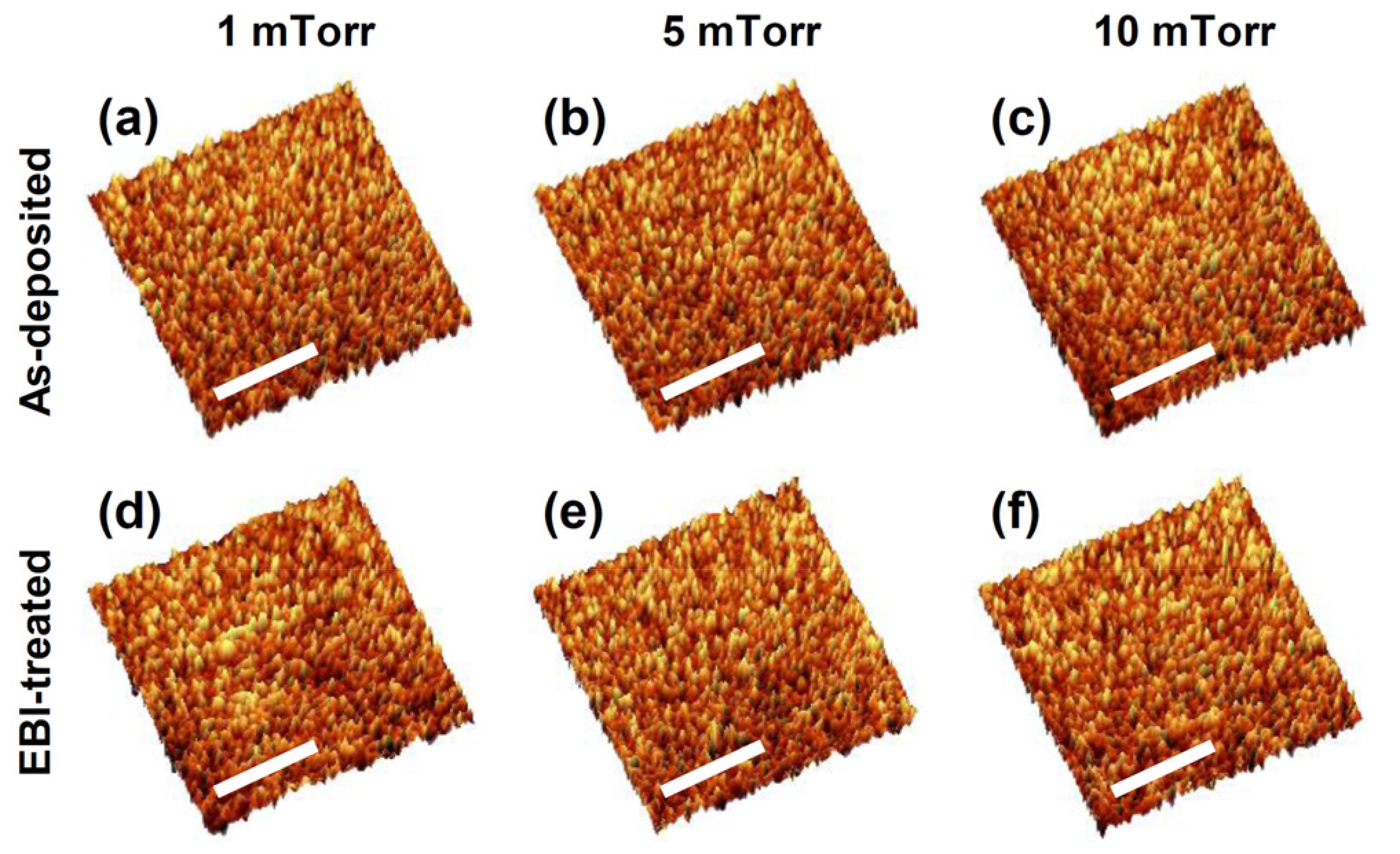 SEM and TEM were carried out to confirm the surface morphology and layered structure of synthesized MoS2 films. Figures 6(a)–(c) show the SEM images of the surfaces of the bare SiO2/Si wafer, as-deposited MoS2 film, and EBI-treated MoS2 film. As the Ra of the SiO2/Si wafer and the MoS2 films calculated via AFM were similar, the surface morphology observed in SEM images was uniform and smooth. The layered structure of the EBI-treated MoS2 film was observed using cross-sectional TEM. As shown in Fig. 5(d), the MoS2 interlayer distance was 0.64 nm. In addition, numerous changes, such as cut edges close to the interface according to the boundary and nonuniformity of the substrate, indicated the close relationship between the substrate structure and deposited layer. Six to eight atomic layers of MoS2 films formed the layered structure; this was consistent with the thickness derived using Δ. 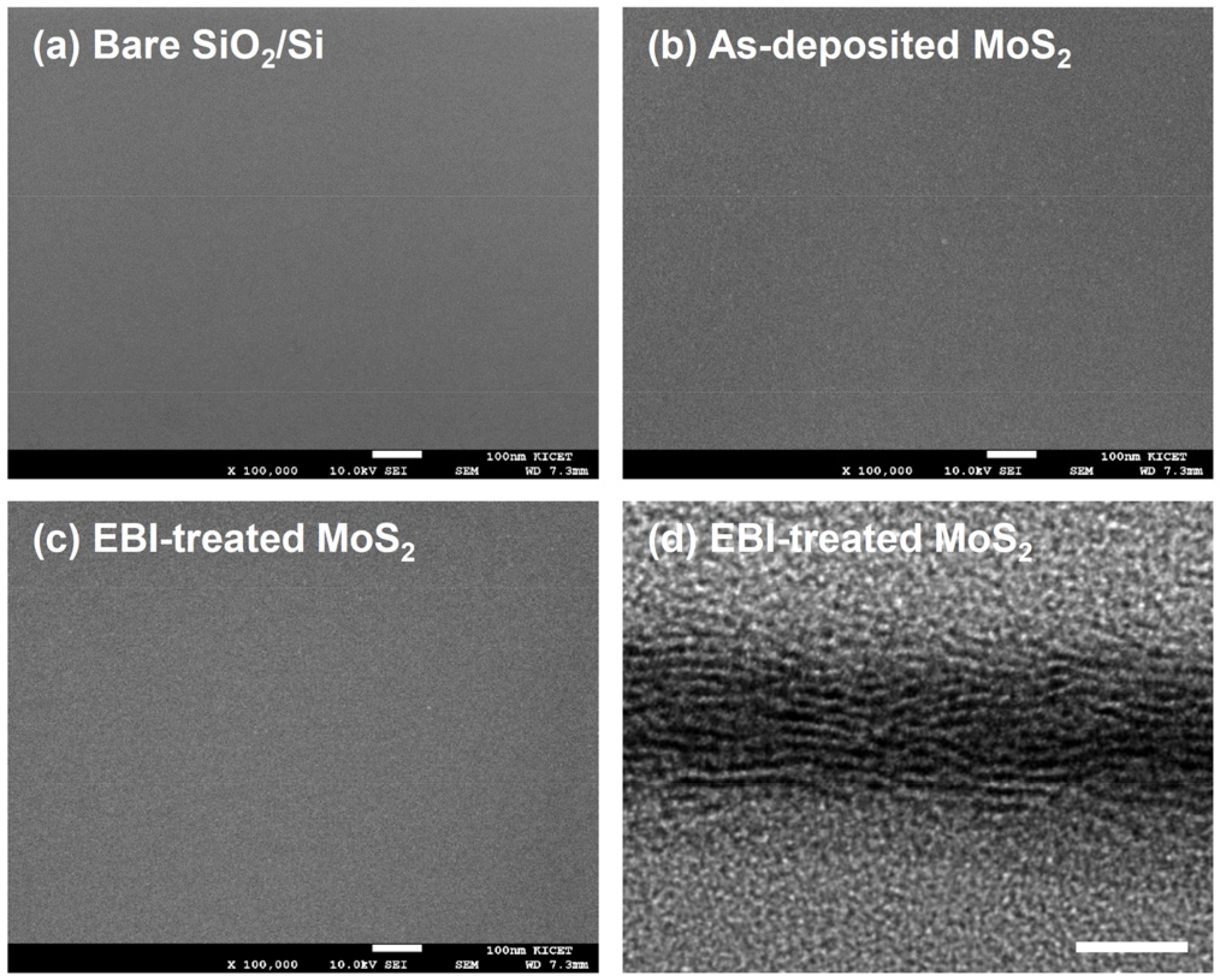 This study was supported by the Basic Science Research Program of the National Research Foundation (NRF) of Korea funded by the Ministry of Science and ICT (NRF-2017R1D1A1B03032923) and the Business Support R&D Program funded by the Korea Institute of Ceramic Engineering and Technology (KCS2003-1).