Efficient charge transport in inverted-structure polymer solar cells (i-PCSs) requires surface localization of the donor polymer in the bulk heterojunction (BHJ) film. For high-efficiency i-PCSs, vertical phase separation was induced between the PTB7 donor and PC71BM acceptor by attachment of a polymethylsulfoxide (PDMS) film on top of the BHJ film. The similar surface energies (SE) of the PDMS film attached to the as-spun active layer and the PTB7 molecules caused PTB7 to flow toward PDMS. Mixing tetrahydrofuran (THF) with PDMS further lowered the SE, reducing the difference between that of PDMS and PTB7 to less than 0.11 mN m−1. THF-treated PDMS efficiently attracted the PTB7 molecules, making BHJ active layer nanostructure amenable to charge transport and collection in the i-PSC. The maximum power conversion efficiency (PCE) of the i-PSCs increased from 6.93 to 8.14 % with respective 8.6 and 6.7 % enhancements of the short-circuit current density () and fill factor ().

Polymer solar cells (PSCs) are considered as the most appropriate candidates for next-generation photovoltaics (PVs) and can be integrated into current portable electronics, as well as flexible and stretchable devices. PSCs have been studied intensively for decades owing to their fascinating properties, such as high transparency, high bending durability, and light weight. The power conversion efficiency (PCE) achieved for PSCs exceeds 10 %, but this is still insufficient for commercialization [1–5]. Many researchers have focused on synthesizing new materials for use as donor and acceptor materials in PSCs. In addition to synthesizing new materials, control of the morphology, including the crystallinity, is another major issue in the development of bulk heterojunction (BHJ)-structured PCSs, because facilitating exciton separation at the donor/acceptor (D/A) interfaces is one of the key parameters for maximizing the device performance [1].

There are numerous studies on enhancing the crystallinity and achieving favorable phase separation in BHJ films, which are essential tasks for enhancing the charge separation, charge transport, and selective collection of charge carriers into proper electrodes. Thermal or solvent vapor annealing, hot solution processing, adopting a templating layer, addition of various solvents [6–11], and surface energy (SE) control [12,13] have been employed to maximize the performance of PSCs. Specifically, SE control is the most promising way to achieve suitable D/A separation for high-performance PSCs. Vertical phase separation could be induced by controlling the SE owing to the attraction between molecules having a similar SE. The induction of vertical phase separation by contact with a ripple-structured polydimethylsiloxane (PDMS) film has been reported [12]. The molecules underwent vertical phase separation because of the capillary effects and surface energy matching of ripple-structured PDMS. Based on this result, we attempt herein to induce vertical phase separation by simply attaching a PDMS film to the upper surface of a BHJ film under dry conditions. This study demonstrates that THFmixed PDMS can induce more efficient vertical separation and increase the crystallinity of the active layer.

PTB7 was obtained from 1-Materials and PC71BM was obtained from Nano-C. All solvents were purchased from Sigma-Aldrich. The BHJ solution (PTB7:PC71BM= 1:1.5 , 25 mg mL−1) was prepared and dissolved in a chlorobenzene:1,8-diiodoctane (DIO) (97:3 ) mixed solvent.

The i-PSC devices were fabricated with the indium-tin-oxide (ITO) glass/ZnO/PTB7:PC71BM active layer/MoO3/Ag structure. The glass/ITO substrates (12 Ω sq−1) were cleaned by ultrasonic treatment in DI water, acetone, and isopropyl alcohol, and then dried in an oven for 30 min at 120 °C. The ZnO layer was first spin-cast onto ultraviolet-ozone treated ITO glass and annealed at 200 °C for 60 min in air. The ZnO substrate was transferred into a nitrogen-filled glovebox, and the PTB7:PC71BM BHJ active layer was spin-cast onto the ZnO substrate. Concurrently, the PDMS film was carefully placed on the as-spun BHJ layer, and the BHJ film was dried at room temperature (25 °C) for 1 h (the control device was solvent-annealed by drying under a glass Petri dish). A MoO3 layer (10 nm) and Ag layer (100 nm) were sequentially deposited on the top of the BHJ layer by thermal evaporation through a shadow mask at 10−6 Torr (base pressure). The active area was 0.0435 cm2 for all devices.

Figure 1 presents a schematic of the process for fabrication of the vertically phase separated inverted-structured PSC (i-PCS) using the PDMS film. Poly [[{4,8-bis[(2-ethylhexyl)oxy]benzo[1,2-b:4,5-b′]dithiophene-2,6-diyl][3-fluoro-2-[(2-thylhexyl)carbonyl]thieno[3,4-b]thiop henediyl]] (PTB7) was used as a donor material and [6,6]-phenyl-C71-butyric acid methyl ester (PC71BM) was used as an acceptor material. The PDMS film was carefully placed on top of the PTB7:PC71BM BHJ layer and induced vertical phase separation between PTB7 and the PC71BM molecules.

As demonstrated in Fig. 1, the as-spun PTB7:PC71BM BHJ active layer made immediate contact with the PDMS film. Owing to the low SE of the PDMS film, the PTB7 molecules were preferentially attracted to the PDMS film (16.25 mN m−1) rather than to the PC71BM molecules (30.83 mN m−1). However, the SE of the neat PDMS film is about 17.80 mN m−1, which is slightly different from the SE of PTB7. Thus, an optimized PDMS film was fabricated by using THF for a better match of the SE with that of the PTB7 molecules, as shown in . Among the various solvents, THF was selected for control of the PDMS film because its solubility parameter is similar to that of PDMS so that PDMS could become swollen when immersed in THF [14]. It is proposed that the volume change in PDMS due to swelling led to the variation in the SE. In most previous studies, PDMS was swollen by dropping the solvent on it or by immersing PDMS in the solvent [15]. For the present purposes, a simple method was adopted, wherein THF was mixed with the PDMS resin (PDMS base and hardener mixture in 10:1 ratio) before PDMS was fully cured. The optimized ratio was 0.1 wt% THF in PDMS resin. Mixing with THF yielded a new PDMS film with a lower SE (16.14 mN m−1), which is more similar to that of the PTB7 molecules. We fabricated i-PSCs by using (i) the deposited neat PDMS film (PDMS device), (ii) THF-treated PDMS film (THF+PDMS device) on the active layer, and (iii) solvent-annealed active layer (control device) in order to compare the properties.

To investigate the origin of the enhancement of the , the water contact angle (WCA) of PTB7, PC71BM, and various BHJ films was measured, as shown in Figs 3(a)–(e). The WCAs of the neat PTB7, PC71BM, and BHJ films were measured using ~11 μl of deionized (DI) water. The samples for measuring the WCA were prepared on an ITO glass/ZnO substrate to simulate real device conditions. The WCAs of the neat PTB7, neat PC71BM, control BHJ, PDMS-treated BHJ, and THF+PDMS-treated BHJ films were 86.6, 110.8, 98.3, 103.7, and 106.2 °, respectively. The surface of the THF+PDMS-treated BHJ film was the most similar to that of the neat PTB7 film, which implies that it has the most PTB7-rich surface of all. To clarify the result, the WCA values were used to calculate the fractional coverage of PTB7 and PC71BM on the BHJ film surface by the applying the Cassie–Baxter equation [16,17]:

To further investigate the influence of contact with PDMS, atomic force microscopy (AFM) was used to analyze the surface morphology, as shown in Fig. 4. From the height images of the surface, the root-mean-square (RMS) value of the active layers decreased from 1.6 nm to 1.2 nm when the THF+PDMS film was deposited on the top surface of the active layer. By depositing the PDMS film on the top of the BHJ layer, the active layer took longer to become totally dried compared with the conventionally dried active layer. The smoother surface of the THF+PDMS-treated device is correlated to the highest . In addition, the slower the crystallization due to slower evaporation of the solvent, the better the crystallinity in the solution-processed BHJs [6]. Therefore, better crystallinity was expected in the THF+PDMS-treated BHJ.

To clarify the effect of treatment with the PDMS film on the morphology and crystallinity of the active layer, we took 2D grazing incidence wide-angle X-ray scattering (GIWAXS) measurement at 5A beam line at 11.57 keV with MAR CCD (sample-to-detector distance: 413 mm) of the Pohang Light Source II (PLS II). The samples for the GIWAXS measurement were prepared in the same manner as real devices, except for the top cathode layer. The 2D GIWAXS images of the control and THF+PDMS-treated PTB7:PC71BM BHJ film show the (100), PCBM, and (010) peaks [Fig. 5(a) and (b)]. The in-plane cut of the 2D GIWAXS images in Fig. 5(c) shows that the intensity of the (100) face-on crystal peak increased with THF+PDMS film treatment. The out-of-plane cut in Fig. 5(d) reveals that the intensity of the peak of the (100) edge-on lamella of the PTB7 polymers decreased slightly. However, the intensity of the peaks corresponding to the (010) face-on and PC71BM increased in the profile of the THF+PDMS treated film. PDMS appeared to induce an increase in the crystallinity of PTB7 and the face-on population, which favors enhancement of charge transport in the vertical direction in the PSCs. Consequently, the PCE was influenced by the , and the could be largely increased.

In summary, the changes in the nanomorphology of the PTB7:PC71BM BHJ active layer upon contact with a PDMS film on the upper surface of the active layer were investigated. The PTB7 molecules could flow toward the top of the active layer upon contact with the PDMS film, which is related to the difference in the surface energies of the PDMS and PTB7 and PC71BM molecules. Elaborate matching of the SE of PTB7 with that of PDMS by introducing a swelling solvent into the PDMS film could accelerate the nanomorphological changes. In addition, the crystallinity of the active layer was enhanced owing to slow evaporation of the solvent confined in the PDMS film. Thus, a PTB7-rich surface and PC71BM-rich bottom structured BHJ could be obtained, which is advantageous for improving the electrical properties of i-PSCs. Overall, the , , and PCE of inverted PTB7:PC71BM PSCs could be improved. 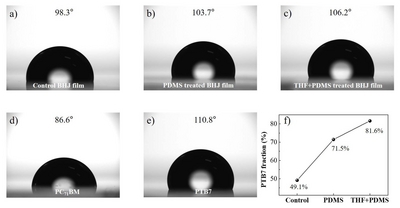 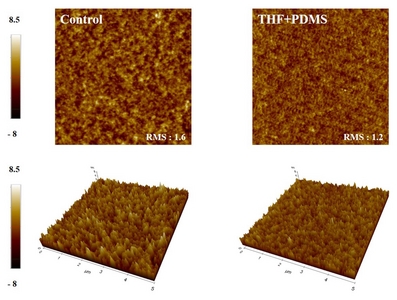 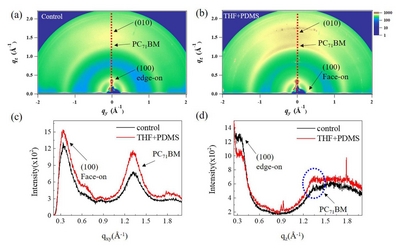