The purpose of this study is twofold: (1) to grow undoped-GaSb epitaxial structure on a high concentration +-GaSb substrate by molecular beam epitaxy and (2) to analyze the grown undoped-GaSb epitaxial structure through photoreflectance (PR) measurements. PR spectrum analysis of the undoped- GaSb epitaxial layer at room temperature shows three notable features. First, in the region above the fundamental band gap , the Franz-Keldysh oscillation (FKO) makes the PR signals oscillate. Second, low electric field PR is observed near . Third, low energetic interference oscillations (LEIOs) occur in the region below the bandgap. An electric field is formed on the surface of the undoped-GaSb layer (i.e., in the interface between the undoped-GaSb and air); by using the FKO component, the calculated magnitude is 70 kV/cm at a growth temperature of 485 °C. In addition, the analysis of the FKO and low electric field PR data indicate a fundamental band gap of 0.723 eV. The thickness of the undoped-GaSb epi-layer, calculated using the LEIO PR spectrum, is 1040 nm.

Modulation spectroscopy is the application of external modulation to measure the optical spectrum of a sample. It is based on changes in the internal or surface electric field of the sample. The optical spectrum measured by modulation spectroscopy has differential characteristics of the perturbation parameter and the reflectivity of the sample. Therefore, the reflectance is highly sensitive to the variation of the perturbation parameter. Accordingly, modulation techniques can be divided into electro-reflectance (ER) spectroscopy (direct field modulation) and light-reflectance or photoreflectance (PR) modulation (indirect field modulation) [1]. ER was first studied by Seraphin [2], and Wang et al. [3] developed PR as a non-destructive method.

In the case of PR, the energy of the pump light that is periodically incident is higher than the bandgap energy of the sample in order to generate a carrier. After absorbing the light, the electron-hole pairs in the sample are separated by the internal electric field, which is then reduced [4]. The variation of the electric field causes the band bending of the sample. The optical properties of the material, such as the reflectance, change with the dielectric function. Therefore, the characteristics of the sample can be analyzed by PR measurements.

In this study, undoped-GaSb epitaxial layers were grown on a high concentration +-GaSb substrate (n~1018 cm−3) by molecular beam epitaxy (MBE) at a growth temperature of 485 °C and the PR spectra were measured. The PR spectra were analyzed theoretically and from them the magnitude of the electric field and the thickness of the thin film were obtained. The PR theory, which is applied to the single layer semiconductor, is introduced with respect to the magnitude of the electric field. The low energy interference oscillation (LEIO) [5–7], which is caused by the interference between the reflection off the surface and the PR signal from the substrate, is considered at energies lower than the band gap energy. The fabrication process and structure of the GaSb thin film according to the growth temperature are explained, as well as the PR experimental conditions. Finally, the results of the electric field magnitude, thin film thickness, and medium information (effective mass) obtained from experiments and calculations are summarized.

where Δ = –, =, =12, is the change in the dielectric function, and and are the Seraphin coefficients [8] given by the refractive index n and the extinction coefficient k of the semiconductor, respectively. In general, the imaginary part of the Seraphin coefficient below the band gap can be neglected because the light absorption is very small. According to Aspnes [9], if the electric field is applied to the semiconductor medium, the electro-optic energy of the charged particles is determined as:

Comparing the phenomenological lifetime broadening parameter with the electro-optic energy proposed by Aspnes, the electric field formed inside the sample can be classified into three categories: low, medium, and high [9].

Assuming a uniform broadening parameter, the dielectric function has a generalized Lorentzian shape, and the change in reflectance is expressed in the low electric field region as [10]:

where is an amplitude parameter, = is the photon energy, is the critical point energy, is the phase parameter, and =2,2.5, and 3 represent the exciton transition, the three-dimensional (3D) band-to-band transition, and the two-dimensional (2D) band-to-band transition, respectively. In this study, the exciton and 2D third differential functional form (TDFF), i.e., m=2 and 3, are used to represent the PR spectra of the GaSb and the 3D TDFF, i.e., m=2.5, is used to analyze the energy states of the medium.

where 0 is a constant related to the polarization and transition strengths, =( – , and are Airy functions of the first and second kinds, respectively, ′ and ′ are differential forms of and , respectively, is the transition energy, and is a unit step function. Furthermore, transitions involving degenerated valence bands should be considered separately by replacing by and , which correspond to transitions including the light and heavy hole, respectively. This creates nesting in the PR spectra using and as:

where and are the relative amplitudes of the heavy and light hole transitions, respectively. As shown in , the exact form of in the intermediate electric field region is quite complex. Thus, Aspnes and Studna derived simple expressions as follows [12]:

where the value of represents the frequency when Fourier transform is applied to the signal of the intermediate PR, the value of is equal to the position of maximum or minimum, and is an arbitrary phase factor.

Figure 1 shows the theoretical PR spectra in the intermediate electric field region in the GaSb sample structure. Because the transitions in the valence band assume heavy holes and light holes, the PR equation requires two Airy functions. GaSb has =0.726 eV at 300 K and used the amplitude ratio 0.30 (i.e., =0.30).

LEIO is the interference of two beams. One is reflected from the surface (air/thin film) and the other is the PR signal reflected from the interface (thin film/substrate). Because the electric field is formed between the thin film layer and the substrate, we can measure the thin film layer thickness from the LEIO PR signals. The signal related to the variation in the refractive index of the substrate can be expressed as [3]:

Figure 2 shows the theoretical LEIO PR signal in the single GaSb layer. Using the theoretical model of 1 and 2 for III–V semiconductors developed by Adachi [13–15], we are able to directly calculate the Seraphin coefficients and .

In this study, undoped-GaSb thin films were grown on n+-type GaSb (100) substrates doped with Te at a high concentration (~1018 cm−3). The growth temperature was approximately 485 °C. The GaSb thin film was grown to a thickness of 1 μm at a given substrate temperature with a Ga beam equivalent pressure (BEP) of 7 × 10−7 Torr and a Sb4 BEP of 5 × 10−7 Torr. The samples after growth showed a stable Sb surface with a reflection high-energy electron diffraction pattern (1 × 3) at a given growth temperature. The crystal structure of the sample was evaluated by X-ray diffraction and the optical properties were evaluated by PR measurements at room temperature. For the PR measurements, a 1.3-μm laser diode was used as the modulation light source, with a modulation frequency of 800 Hz. The probe light was a beam obtained from a tungsten-halogen lamp (250 W) dispersed by a monochromator. The probe beam was incident on the sample surface, and the reflected beam was measured using an InGaAs detector. A closed-cycle He refrigerator was used to control the sample’s temperature.

The low-field PR signal is accompanied by the LEIO PR signal. The simulation results show that, with a growth temperature of 485 °C, the intermediate electric field is 70 kV/cm. Undoped-thin films and high doped substrates can be analyzed in the same way as p-n junctions. The thickness of the samples measured from the LEIO signals was d = 1040 nm. Due to the incident angle of the probe beam and the dispersion function of the medium, the measured thicknesses (1040 nm) and the production thicknesses (1000 nm) are slightly different.

In this study, undoped-GaSb layers were grown on high-concentration +-GaSb substrates at 485 °C by MBE. The experimental PR spectra of the sample were analyzed using theoretical approaches (TDFF, FKO, and LEIO). The theoretical simulation results were compared with experimental data to derive the electric field and thickness of the thin film layer formed at the interface between the undoped-GaSb thin film layer and the high-concentration GaSb substrate. In addition, the material’s properties, such as the effective mass of heavy (and light) holes and the broadening parameters, were confirmed. 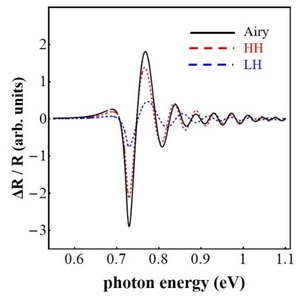 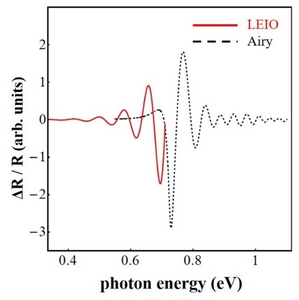 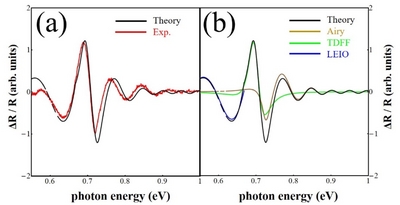