Because radio frequency (RF) sensors typically experience interference between their capacitive detector and inductive detector, it becomes difficult for them to precisely measure voltage and current waveforms. We developed a high-precision RF sensor by using novel double walls (NDWs), which can minimize the interference. The geometrical construction variables of the NDWs are determined by analyzing the results from three-dimensional electro-magnetic simulation. The phase difference between voltage and current waveforms for the designed RF sensor is approximately 1.32° at a matched load, and that for an ENI probe (VIP1004) is 24.78°, as a result of which the developed RF sensor has better performance in preventing such interferences, compared with the other commercial sensor.

In many radio frequency (RF) systems, not all the output power of the RF generator reaches the load because of power losses in line and matcher [1–4]. Furthermore, upon using plasma chamber as a load, the power loss of the chamber is non-intuitive because plasma is a non- linear dielectric material [5]. Therefore, to measure the correct power loss of the chamber, an RF sensor can be connected to the chamber for detecting voltage and current waveforms [6]. By measuring the waveforms of the chamber as close as possible, excellent indication of plasma fabrication can be obtained. This, in turn, yields better control of the etching or deposition characteristics for a silicon wafer or other workpiece in the chamber.

In this paper, we developed a high-precision RF sensor, in two steps, by using novel double walls (NDWs). First, we analyzed voltages at specific locations inside of the RF sensor for minimizing the interference during three-dimensional electro-magnetic (3D-EM) simulation. The interference-minimizing process is detailed in the simulation study section. Second, we measured the phase differences between voltage and current waveforms by using the RF sensor at a matched load. The results were compared with those for the other commercial sensor.

In this section, the design of the RF sensor is discussed, following which a process for minimizing the interference between the voltage and current wave-forms is presented.

Figure 1 depicts the inside of the RF sensor, including the NDWs. As depicted in Fig. 1(a), the capacitive and inductive detectors are patterned on a single printed circuit board (PCB). The NDWs, which comprise three inner walls and four outer walls, penetrate the PCB. The geometrical construction variables of the NDWs are determined by D, H, and , as shown in Figs. 1(a) and 1(b). The materials of each part of the NDWs are composed as: the PCB is made of polyimide; the capacitive and inductive detectors, and core-conductor are made of copper; the cylinder near the core-conductor is made of teflon; the house including the NDWs is made of aluminum (the perspective view Fig. 1(c) will be helpful for better understanding this model). In this model, the CEF that cannot be shielded from the inner walls, but it can be shielded by the outer walls. Therefore, the NDWs can reduce the interference more effectively as compared with conventional cylindrical walls [9,10] used for designing high-precision RF sensors.

In addition, we have to determine a less sensitive condition of performing voltage detection with respect to the geometrical variables of the NDWs. In the sensitive condition, when RF sensors are manufactured in large numbers, the degree of the interference for each sensor can be different because of manufacturing error. It results in poor repeatability of the RS sensor production.

Figure 3 depicts the voltage ratios V2/V1 and V3/V4, versus the geometrical variables H, D, and . The pink region satisfies the less-sensitive condition. During the computation process, the intermediate value in the pink region is selected, and the process is conducted in five steps as depicted in Figs. 3(a)–(e). As a result of the process, the geometrical variables of the NDWs are finally converged to D = 3 mm, H = 45 mm, and = 70°. After minimizing the interference, the RF sensor was built. The assembly of the RF sensor is depicted in Fig. 4.

Figure 5 depicts a schematic of the experimental setup. The RF sensor is connected between an RF generator (NPG-1250A) and a matcher (Path Finder PF0113) by using N-type coaxial cables, and the sensor is also connected to an oscilloscope (TDS-3052B) by using SMA coaxial cables for measuring the waveforms. The oscilloscope is, in turn, connected to a PC by using the GPIB communication cable, and the probe condition of the oscilloscope is 50 Ω, as depicted in Fig. 8. RF power, ranging from 100 to 1000 W, at 13.56 MHz is applied to the matched capacitively coupled plasma chamber, and the chamber pressure is 5.4×10−6 Torr for preventing the generation of the dark discharge.

From this result, we can expect that the interference between the capacitive detector and the inductive detector is considerably reduced to be able to perform high-precision measurement of voltage and current waveforms, in contrast to that of the ENI probe.

Subsequently, the input impedance of the inductive detector was computed in 3D-EM simulation to confirm the bandwidth frequency of the RF sensor. The bandwidth depends on the self-resonance frequency (SRF) that comes from stray capacitance in the detector [11].

Figure 8 depicts the input impedance versus frequency for the inductive detector. In Fig. 8, the SRF is shown as 176 MHz, and the impedance is linearly proportional to the frequency under 100 MHz; the 0–100 MHz range can be defined as bandwidth because the stray capacitance in this range is negligible and hence can be ignored. Therefore, we expect that this inductive detector works suitably as an inductor in the bandwidth of 100 MHz. From this result, it can be noted that this RF sensor operates precisely with the bandwidth of 100 MHz.

As a result of this research, we developed a high-precision RF sensor by minimizing the interference between the two detectors by using NDWs in 3D-EM simulation. The bandwidth (100 MHz) and the characteristic impedance (50 Ω) were analyzed in the 3D-EM simulation as supplementary study. The RF sensor’s phase difference measured between the voltage and current waveforms was observed to be 1.32° for a matched load. This small value of phase difference means that the RF sensor is much more superior to another commercial sensor (VIP1004: 24.78°) for performing high-precision measurement of voltage and current waveforms.

This work is supported by Chungnam National University (CNU). 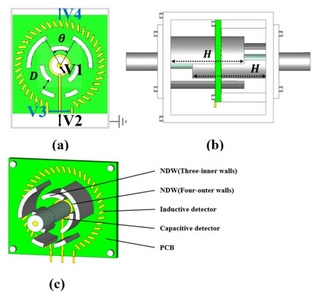 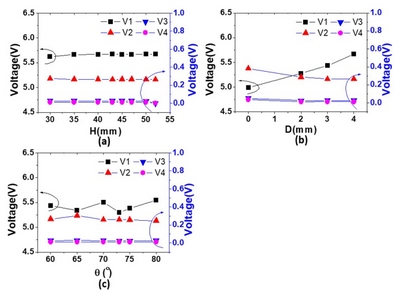 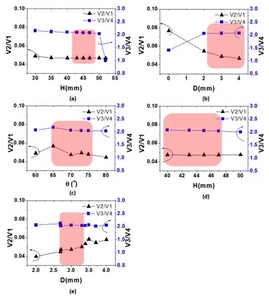 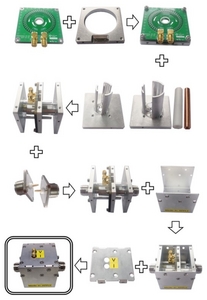 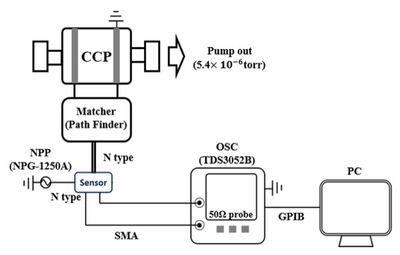 Fig. 5. (Color online) Schematic of the RF system with the RF sensor. 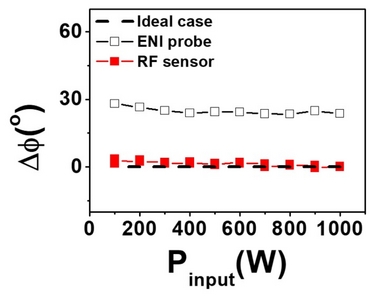 Fig. 6. (Color online) Phase differences between the voltage and current waveforms with respect to the RF sensor. 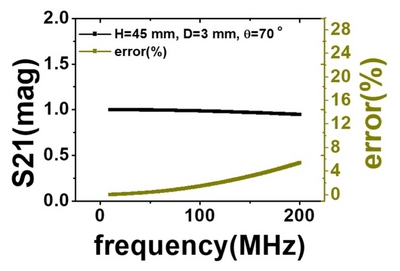 Fig. 7. (Color online) Transmission coefficient and error of the RF sensor against frequency. 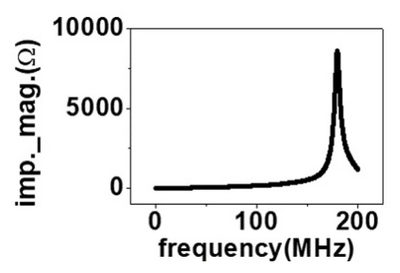 Fig. 8. Input impedance of the inductive detector versus frequency.