Atmospheric pressure plasma sources have recently received increased attention due to their many advantages. These advantages include the fact that they do not require expensive vacuum equipmentand are low-cost and simple systems that are easy to operate. Because of these advantages, many types of atmospheric pressure plasma sources have been developed using various frequency range powers from direct current to microwave, or with a short pulse. For example, the microwave and radio frequency (RF) plasma torch, dielectric barrier discharge, arc plasma torch, and the atmospheric-pressure capacitively coupled plasma (CCP) jet are well known examples of atmospheric pressure plasma sources [1–5]. As atmospheric pressure plasmas have many applications, particularly for surface modification of thermally weak materials, such as fabrics, polymers, or glass plates for display industries, remediation of hazardous gases utilizes the gas temperature effect of the plasma; thus, accurate measurement and control of the gas temperature are very important to optimize the performance of the plasma treatment [6,7]. The gas temperature, which is defined as the kinetic temperature of heavy particles, can be obtained thorough spectroscopic methods, such as the Doppler broadening method and the Boltzmann plot method, in which optical emission spectroscopy has been generally used because of its simplicity and nonintrusive nature. The gas temperature measurement by the Doppler broadening of the spectral lines emitted from neutral particles is the most straightforward method, given by the following equation.

The second method, the Boltzmann plot of diatomic molecular spectrum, is based on the fact that the gas temperature is closely related to the rotational temperature of an atmospheric pressure plasma [8–10]. The gas temperature can be obtained by measuring the rotational temperature of the diatomic molecular spectra in equilibrium plasmas, as well as in none-quilibrium plasmas at atmospheric pressure because the rotational-translational relaxation is sufficiently fast to equilibrate the rotational and the gas temperatures [11,12]. Figures 1(b) and 1(c) show a typical OH molecular spectra calculated with a given temperature and broadening value, and the Boltzmann plot diagram obtained by analyzing the intensity ratio according to each spectral line, respectively. Similarly, because several tens of molecular lines exist in the very short wavelength region, a high-resolution spectrometer is also required to obtain the well-resolved Boltzmann plot. In recent studies, therefore, an improved method using the synthetic spectrum has been used to overcome the limitation of resolution [11–14]. In this work, to achieve this, a semiautomatic program for the gas temperature measurement was developed using the synthetic spectrum method. In particular, three kinds of diatomic molecules (OH, N2, and O2), frequently observed in many atmospheric pressure plasmas due to their open-air operation, were selected. Furthermore, the CH and CN emission spectra, as sometimes observed by the addition of CH4 gas to deposit carbon-based materials, were investigated [15,16]. By comparing the measured values, the accuracy and usefulness of the different spectra were examined. In section 2, theories regarding the Boltzmann plot and synthetic spectrum method are described, and numerical code is introduced. In section 3, we present the experimental results and the validity of the numerical code; the conclusion follows in section 4.

If an atmospheric pressure plasma is produced in ambient air, the hydroxyl (OH) molecular band (A2S+ − X2P, 309 nm) and the nitrogen monopositive ion (N2+) first negative system (B2Su+ − X2Sg+, 391.4 nm) are observed in the emission spectrum due to water molecules in the air and nitrogen from the air composition, respectively. Meanwhile, O2 (b1Sg+ − X3Sg−, 759.4 nm), CH (A2Δ − X2P, 431.4 nm), and CN (B2S+ − X2S+, 388.3 nm) are emitted from the plasma by the addition of a small fraction of O2 and CH4 gas for specific applications. The theoretical spectrum intensity corresponding to any rotational temperature (rot) can be calculated as follows [8–10]:

where is the wavenumber, is the oscillator strength, is the Boltzmann constant, is a coefficient containing the rotational partition function, and is the rotational energy level. and are expressed respectively as:

where is a constant depending on the change of dipole moment and total number of molecules in the initial vibrational state, is the rotational partition function, and are the upper and lower state, respectively, and is a rotational constant in the state of the vibrational quantum number . All the constants can be replaced by adequate values for energy levels and transitions of each molecular spectrum based on the well-known data by Herzberg [10]. In particular, for the N2+ molecular spectrum, even-odd alternation of the intensity was considered, owing to the alternating statistical weights of the rotational levels in the upper and lower states [10]. The theoretical OH, N2+, O2, CH, and CN spectra were calculated based on the data of Dieke and Crosswhite [9], Dick [17], Touzeau [18], Luque [19], and Acquaviva [20], respectively. shows an ideal rotational spectrum of diatomic molecules that does not consider the line broadening effect. To approach the realistic emission spectrum, the line broadening effects, such as instrumental broadening, Doppler broadening, and Stark broadening, must be considered. In most of the non-thermal atmospheric pressure plasmas, the Doppler broadening is usually negligible because of the relatively low gas temperature nature of the plasma [11–14]. As an example, if the instrumental broadening has Gaussian shape and is the dominant broadening source, which is the case of our experimental condition, the measured intensity profile would be the convolution of and the Gaussian function, expressed as:

where is the intensity obtained from at the wavelength λ and Δ is the width of the Gaussian-shaped instrumental broadening corresponding with the ). Based on this, the synthetic spectra of the diatomic molecules were yielded through the summation of each line intensity in the wavelength region of interest. Figure 2 shows the typical synthetic spectra of diatomic molecules at 3000 K with 0.1 nm of Δ using .

Figure 4 shows a comparison of the rot determination between the synthetic spectrum and the experimental spectrum observed from RF atmospheric pressure CCP. Without CH4 gas addition, the helium plasma in open air emitted a N2+ rotational spectrum, which showed a rot of 455 K at 150 W. By adding CH4, the CH and CN emission spectra were observed and showed rot values of 450 and 430 K, respectively. For CN, the mismatch between the synthetic spectrum and the experimental spectrum mainly resulted from the vibrational spectrum of CN (1-1, 2-2) because only the (0-0) band of CN was used to determine rot in this work. For the atmospheric pressure microwave-induced plasma, the rot of 2200 K was measured using the OH and O2 molecular spectra at 550 W microwave power, as seen in Fig. 5. However, as argon and oxygen gases were used for the microwave-induced plasma generation, argon atomic lines were mixed with the O2 molecular band; the atomic lines should be excluded in the comparison. In addition, the measured rot showed a similar value to the gas temperature, which was obtained by a thermocouple around the 1000-K region [13]; hence, any diatomic molecular spectra as a thermometric particle could be selected to induce the gas temperature at atmospheric pressure.

Until the above results were obtained, the rot in the range of 400–2500 K was investigated using the numerical code developed in this work. Considering the sensitivity of the method in various rotational temperatures and instrumental broadening widths, the 2 values of the calculated spectra were checked in the wide range of rot of 300–12000 K and Δ of 0.1–0.5 nm. The spectrum of 300 K was used as a reference for comparing with different rotational temperatures. Therefore, if the variation of a spectral pattern between successive rotational temperatures is noticeable, the 2 value is large. This indicates that the large variation of 2 would assure the distinguishable spectrum between temperatures. Figure 6 describes the 2 values with respect to various rot and Δ values for OH (top), O2 (middle), and N2+ (bottom) molecular spectra. As shown by the results, except the OH case, as Δ increased, 2 also increased. For the OH molecular spectra, however, as the value of Δ increased, the 2 value decreased. This is because the shape of the OH spectrum became more simple; in particular, two groups in the range of 306–307 nm, which have relatively strong dependence on the rot, merged into one simple bell-shaped figure [11,13].

Another noticeable information from Fig. 6 is the temperature dependence of the spectra. The rotational spectra of the diatomic molecules are more suitable for low-gas temperature plasma. By increasing the temperature, the slope of 2 variation saturated to a certain value at each Δ value, indicating that the plasma would be in the thermal equilibrium state.

This work was supported by the National R&D Program through the National Research Foundation of Korea (NRF) funded by the Ministry of Science and ICT (No. NRF-2017M1A7A1A01015893). 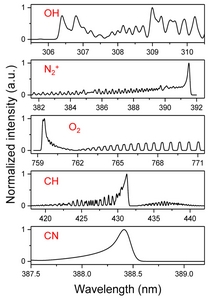 Fig. 4. (Color online) Comparison of the measured spectrum (○) with the calculated N2+, CH, and CN spectra (−) of 455, 450, and 430 K, respectively. Experimental emission spectra were obtained from an atmospheric pressure RF helium CCP with 150 W. To obtain the CH and CN spectra, a small amount of CH4 gas was added to helium plasma. All the calculated molecular spectra at each rot value were generated by the developed program. 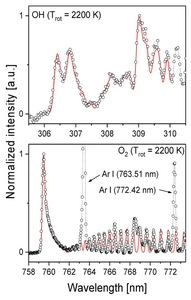 Fig. 5. (Color online) Comparison of the measured spectrum (○) with the calculated OH and O2 spectra (−) obtained from a microwave-induced Ar/O2 plasma, showing a rotational temperature of 2200 K. 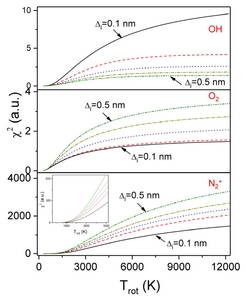