The microplasma system that uses a stripline resonator is a promising plasma system because, capitalizing on the resonance property of the plasma source, it can readily generate plasma under atmospheric conditions without the assistance of an additional matching network. However, precise determination of the resonance frequency before device manufacturing is very important in practice. Therefore, the evolution trends of the resonance frequency of the discharge have to be investigated, based on source impedance analysis, to get an insight into the discharge matching condition. In this paper, a means of determining the discharge source impedance, called conformal mapping, and its application to the microwave parallel stripline resonator discharge source is presented and discussed.

In many rf systems, some of the output power of the rf generator does not reach the load because of power loss in the line and matcher. When a plasma chamber is used as the load, the power loss in the chamber is non-intuitive because plasma is a non-linear dielectric material. Thus, to accurately measure the power loss in the chamber, an rf sensor can be connected to the chamber. Microplasmas have recently received much attention for development and application. For a combination of the potentials of low temperature plasmas, which have the advantage of being in the micro scale, the discharge creates a highly reactive environment that contains charged particles, excited species, radicals, and photons; this is applicable to various fields, including bio-medical applications (treatment of living tissues, tissue sterilization, and blood coagulation), dental treatment, displays, radiation sources, microchemical analysis systems, gas analyzers, and photodetectors. Microplasmas can be generated over wide pressure range from a few mTorr up to a few atmospheres. Typically, operation of microplasma systems at atmospheric pressure is more favored as its size can be reduced by eliminating the micro-pump and it only requires low power, making its integration into microsystems and portable devices possible [1].

Recently, the microwave parallel stripline resonator discharge source has been widely investigated due to its ability to use the source resonance to generate plasma even under difficult conditions such as that at atmospheric pressure, without assistance from an additional matching box. However, precise determination of the resonance frequency before device manufacturing is very important in practice. Therefore the evolution trends of the resonance frequency of the discharge have to be investigated, based on source impedance analysis, to get an insight into the discharge matching condition. In this paper, a means of determining the discharge source impedance, called conformal mapping, and its application to the microwave parallel stripline resonator (MPSR) discharge source is presented and discussed.

In this section, we the first explain our motivation for this work before we beginning calculations. Figure 1 is an example of the S11 parameter of the MPSR, obtained using commercial CST microwave studio software (CST-Computer Simulation Technology Company). As shown in Fig. 1, the parameter spectrum has a sharp minimum value at approximately 0.74 MHz, reflecting strong resonance in the device. A simple calculation based on Fig. 1 shows that the 3 dB quality factor () of the MPSR source is very high at 1747. This indicates the ability of the device for high efficiency discharge operations under resonance conditions. Because of the high quality factor of the device, the precise determination of the resonance frequency before device manufacturing is very important. Therefore, the evolution trends of the resonance frequency with change in other input parameters such as the location of the feeding point of the input power, the characteristic stripline impedance, and the impedance of the discharge gap should be investigated to get an insight into the discharge matching condition.

One can apply an electric circuit model to estimate the resonant frequency and net impedance of an MPSR and thereby determine the key parameters that control the performance of the device. This results in the formulation of closed-form expressions that are useful for designing an MPSR and analyzing the designs. However, MPSR geometry is not like that of a stripline or other well-known geometries. Therefore, the device parameters must be determined carefully. There are various methods to do this, such as finite difference methods, Green’s functions, and conformal mapping. In this paper, the characteristic impedance, capacitance, and inductance of the design are calculated using the conformal mapping method. The data obtained after calculation, simulation with a commercial program, and conducting an experiment based on an MPSR device are presented for comparison.

Second, with conformal mapping, the Dirichlet and Neumann boundary conditions remain unchanged in the transformed region. Third, the conformal function preserves the capacitances of the corresponding conductors. The second property of conformal mapping implies that, instead of solving a boundary value problem directly on the original plane, it can be transformed into a simpler problem on the mapped plane. The third property is the key to estimating capacitances where a two-dimensional region with an abnormal distribution of conductors or boundaries is transformed into a region where capacitance is known, for example, in parallel plates. A widely used conformal transformation for capacitance calculation is the Schwarz-Christoffel mapping [2,11].

where and are complex constants that determine the size, orientation, and position of the polygon. (1, 2, ···, ) are the points on the real axis corresponding to the polygon vertices and (1, 2, ...., ) are the interior angles. If a point on the real axis of the -plane is at infinity, for instance , then becomes

shows that the factor involving is absent. This condition is often used in case where the point at infinity on the plane maps to one of the vertices of the plane polygon. Another note significant for application is that infinite open polygons can be considered as the limits of closed polygons.

The sequence for calculating mutual capacitance between two legs of the resonator in a rectangle is shown in Fig. 4 using the (a) original structure, (b) intermediate structure, upper half-plane, (c) intermediate structure with scaled axis, and (d) parallel plane capacitor. First, we use the Schwarz–Christoffel transformation, given in , to calculate the capacitance caused by the field inside two strips without fringe field, which is due to edge effect, assuming a wide strip width.

Transformation from -plane to -plane

The mapping equation from the -plane into the plane gives as follows:

where ′ is the complementary modulus and . The inverse function of (), that is pressed as functions of and , is as follows:

Constants ′ and can be obtained from the boundary conditions as follows:

substituting the boundary conditions and into , we obtain

Solving the equations in system 10, we obtained = 0 and . Therefore, from , the mapping function becomes

and the position of 6 on the -plane can be determined according to its boundary condition as follows:

To obtain 6 and 8, the modulus is required. We can use the following approximation [12]

and the solution is

With , the boundary conditions at or can be obtained as follows:

Transformation from -plane to ′-plane

Transformation from ′-plane to -plane

Now, is used to map from the ′-plane to the -plane:

By substituting conditions into , and simplifying to an elliptic integral, we have

where . Similarly, as the first step, constants ′ and can be obtained from the boundary conditions. The solutions are , 1 = 0. Therefore, the transformation function for this step is

By substituting the boundary conditions of ′-plane into , the position of points in -plane corresponding to those in ′-plane are

where . Therefore, the mutual capacitance per unit length caused by the two legs of the resonator (without the edge effect) is

Similarly, the capacitance of parallel capacitors is given as

where and . The capacitance per unit length determined from the structure of Fig. 5(a) is

We can determine the contribution of the capacitance per unit length of the stripline direction caused by the fringe field, as shown in Fig. 6, as

Applying to , we have

The discharge gap capacitance of the resonance can be given as

where 1, 2, and 3 are the capacitances of the left-half (inside the dielectric with dielectric constant 1), right-half (in air or plasma), and across the discharge gap, respectively; is the discharge gap width; is the strip thickness; is the distance between two parallel legs of the resonator as shown in Fig. 7; and is the gap length (see Fig. 1). The cross capacitance 3 can be obtained as

where 2 is 1 in air, and is the effective plasma permittivity in the plasma region. Here, is dependent on plasma parameters (pressure, density, etc.) and also on the plasma size in the discharge gap.

The left-half component 1 was calculated in the last section. The sequential schematic for calculating 3 by applying Schwarz–Christoffel transformation is shown in Fig. 8.

The sequence for calculating 2 from two coplanar strips is also shown in Fig. 8. Applying the Schwarz–Christoffel transformation to map the upper half plane of -plane to a rectangle in the -plane and simplifying the expression similar to the above section, we obtained the mapping function of this transformation as

where 3 is /, and its compensation, 3′, is . The capacitance of the air side of the gap (without the fringe effect) is

where , and . From , , , and , the discharge gap capacitance including the edge effect is

The effective dielectric constant at the discharge gap is given as

where is the capacitance with the dielectric replaced by air.

where and . The capacitance per unit length of the stripline is

The capacitance between one leg of the resonator and ground, as shown in Fig. 11, is

The characteristic impedance of each branch, as shown in Fig. 12, is

where 0 is the resonance frequency without a discharge gap, and is the effective dielectric constant at the discharge gap:

where 0 is the capacitance of discharge gap when dielectric is air.

Thus, the resonant frequency of MPSR can be given as

The result of the dependency of the resonant frequency on the gap width for a fixed thickness of the stripline (100 m), calculated from , is presented in Fig. 13. The calculation and simulation results are in good agreement.

In this paper, the capacitance and characteristic impedance of MPSR line were analyzed based on the conformal mapping method, and the evolution trend of the resonance frequency was investigated to understand the discharge matching condition. The calculation results are in good agreement with the results of the commercial CST microwave studio software. This paper contributes toward the understanding of the operation principle and optimization of MPSR.

This work was supported by the Chungnam National University (CNU). 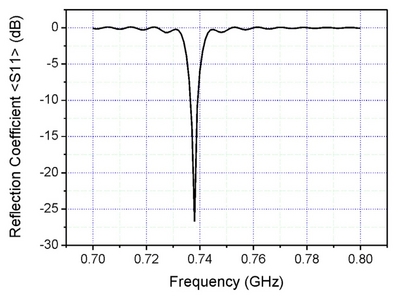 Fig. 3. (Color online) Example of electrical field distributions along the two legs of the resonator in (a) side view and (b) front view; (c) the corresponding capacitance network for a resonator operated in the odd resonant mode. 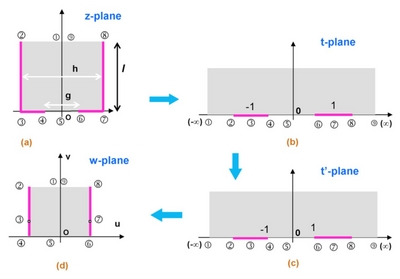 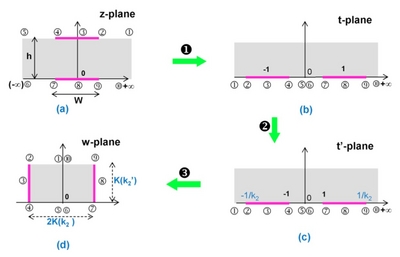 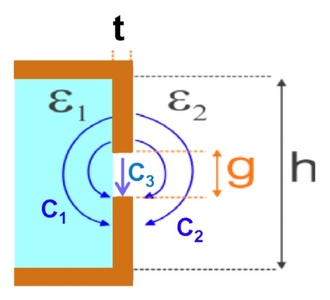 Fig. 7. (Color online) Magnified view of the discharge gap with a simple capacitance model for calculation.

Fig. 8. (Color online) Mapping sequential for calculating 2 with (a) original structure and (b) parallel plane capacitor. 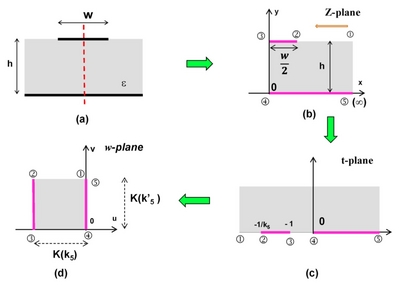 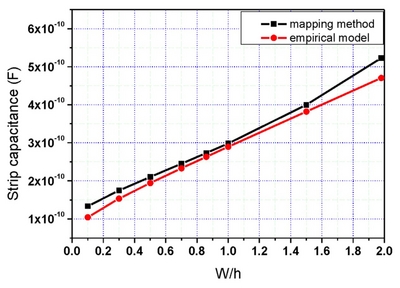 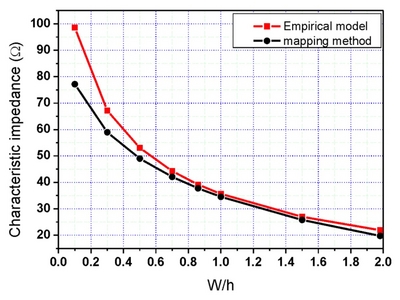 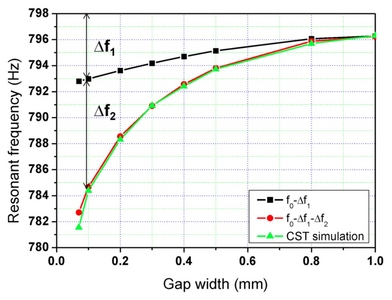 Fig. 13. (Color online) The black curve shows the effect of the lengthening of the stripline on the resonant frequency and the red curve shows the effect of both the lengthening of the stripline and the discharge gap capacitance under changing of discharge gap size on the resonant frequency.