Acceptor and donor dopants have a significant effect on the dielectric properties of BaTiO3. In this paper, Sb, Nb, and Ta were added to BaTiO3 solid solutions to analyze the specific change of dielectric property based on temperature. First, the crystal stabilization process was analyzed by X-ray difraction and scanning eletron microscopy. Second, the optimum sintering conditions were confirmed according to the results, and specimens were prepared to compare their characteristics. In this experiment, it was found that the calcining condition was ~1100 °C and the sintering condition was ~1300 °C, although the heat treatment conditions were slightly different depending on the additive materials. The dielectric constants of BaTiO3 doped with 1.0 mole% of Sb, Nb, and Ta reached 4741, 2055, and 2963 at room temperature, and the transition temperatures were ~67, ~116, and ~109 °C, respectively, which shifted to very low temperatures from the transition temperature of pure BaTiO3 (~125 °C). The results of vs. and [()−()] vs. () were partially different from those of pure BaTiO3, having a temperature slightly higher than the phase transition temperature. This abnormal ferroelectric phase transition property of impurity-substituted BaTiO3 was confirmed by using the modified Curie-Weiss rule.

Ferroelectric BaTiO3, which has been extensively studied since just before World War II, has since been actively used in industry. The discovery of ferroelectricity in Pb(Mg1/3Nb2/3)O3 and BaTiO3 is very important, and the BaTiO3 single crystal and solid solution, unlike Pb(Mg1/3Nb2/3)O3, occupy an important position in lead-free material research. According to the results of several researchers, BaTiO3 exhibits a Pm3m cubic phase at high temperature and a tetragonal crystal structure at room temperature. In the ferroelectric state below the Curie temperature, spontaneous polarization occurs owing to the non-centrosymmetric displacement of Ti4+ and O2− ions compared to the Ba2+ ions P4mm [1]. Pure BaTiO3 is well known as a stable dielectric with an energy gap greater than 3.05 eV at room temperature, having large dielectric strength. Addition of appropriate additives to the BaTiO3 solid solution can transfer the temperature range of the maximum dielectric constant to room temperature, which is very useful [2,3]. In addition, the sensitivity of the electric field strength and the frequency can be improved in the vicinity of the phase transition temperature from a tetragonal crystal to a cubic crystal [4].

The main purpose of this study is to evaluate the dielectric properties of the BaTiO3 solid solution prepared by the solid state reaction method with the addition of Sb, Nb, and Ta, which are three potentially useful additives, based on previously published research data [5–7].

BaTiO3 solid solutions containing 1 mole% of Sb, Nb, and Ta were prepared by mixing raw materials (99.9 % or higher purity) of oxides such as BaO, TiO2, Sb2O3, Nb2O5, and Ta2O5. When BaTiO3 was doped with Sb, Nb, and Ta, the optimum sintering temperatures were 1320, 1300, and 1320 °C, respectively. As shown in Fig. 1(a), the fracture surface of the sintered body doped with Sb forms a rectangular shape. The sintered bodies doped with Nb and Ta in Figs. 1(b) and 1(c) formed a relatively uniform rounded grain. The difference in grain growth occurs because the donor-type dopants Nb and Ta are expected to penetrate into the body-center of perovskite, but Sb, which is an acceptor-type dopant, is located in the cube corner of perovskite. For example, when donor dopant Nb is doped into BaTiO3, the result is that the Ti-atom changes to Ti3+ from Ti4+, resulting in a form similar to Ba2+(Ti1−2x4++4Nbx5++5Tix3+)O3 [8].

The universal energy-dispersive X-ray spectroscopy measuring device, or energy dispersive spectroscopy (EDS), is commonly used to confirm the presence of many elements in dielectric materials. Figure 2(a) displays an EDS image of a pure BaTiO3 solid solution. The EDS spectra in Figs. 2(b)–(d) respectively show that the regions rich in Sb, Nb, and Ta ions are closely related to the heterogeneous particles in the perovskite. When BaTiO3 is doped with Sb, Nb, Ta, or the like, a charge imbalance occurs because of the different oxidation states. This stoichiometric non-uniform distribution and segregation affects the dielectric properties of the material. Addition of isovalent impurities to BaTiO3 has no significant effect on conductivity, but off-valent impurities have a significant effect on both ferroelectricity and conductivity. The major carriers can significantly affect the crystallization of the solid solution. The diffusion kinetics are affected by additives and charge-compensating defects in sintering. However, the role of the dopants is very complicated, both physically and chemically. The grain growth of BaTiO3 doped with Nb and Ta greatly increased, but the BaTiO3 grains doped with Sb did not change in grain size from that of pure BaTiO3. The major role of donor cations, such as Nb and Ta, can have an impact on particle boundary mobility, as charge compensation has an important effect. Usually, the energy required to bond the dopant ions to each lattice site of the perovskite is related to distortion, and is also closely related to compensation defects during binding of the aliovalent ions. Therefore, because the doping ions exist at a high concentration in the grain boundaries, abnormal grain growth during sintering is suppressed to form high-density, impure BaTiO3.

Many studies have shown that pure BaTiO3 is composed of a mixture of two crystal structures: a tetragonal structure and a cubic structure. The X-ray diffraction (XRD) pattern obtained in a diffractometer using Cu radiation confirmed the formation of the perovskite phase without a pyrochlore phase. Figure 3 shows XRD peaks of the (111), (200), (002), and (210) planes of BaTiO3 doped with Sb, Nb, and Ta. In particular, the (222) plane around 31 degrees was not observed, and the (110) plane was clearly visible, indicating that a BO6 structure was stably obtained.

Capacitance was measured at a temperature heating rate of 4 °C/min in a temperature range of 20 °C to 300 °C, and the frequency range was 10 to 106 Hz. Dielectric constant and dielectric loss were calculated from the obtained capacitance, and the differences in dielectric properties among the three BaTiO3 systems doped with Sb, Nb, and Ta were analyzed.

In this paper, the microstructure and dielectric properties of BaTiO3 polycrystalline samples doped with Sb, Nb, and Ta were compared. BaTiO3 doped with Nb and Ta confirmed the distinct growth of crystal grains, and the crystal structure showed a lower degree of tetragonality. Meanwhile, Sb-doped BaTiO3 exhibited very limited grain growth, and the dielectric phase transition temperature shifted sharply toward a lower temperature. Abnormal grain growth was suppressed by doping with Sb. The dielectric constants of BaTiO3 doped with 1.0 mole% of Sb, Nb, and Ta were 4741, 2055, and 2963 at room temperature, respectively. The Curie temperatures of the three irradiated compositions were lower than those of the pure BaTiO3 solid solution and single crystals. The phase transition temperatures of BaTiO3 doped with Sb, Nb, and Ta were 67, 116, and 109 °C, respectively. A linear reduction of the dielectric constant was observed at frequencies up to 103 Hz in all three compositions. As a result of the analysis of the three compositions based on vs. and [()−()] vs. (), the diffusivity of their ferroelectricity at temperatures above the Curie temperature is slightly different from pure BaTiO3. 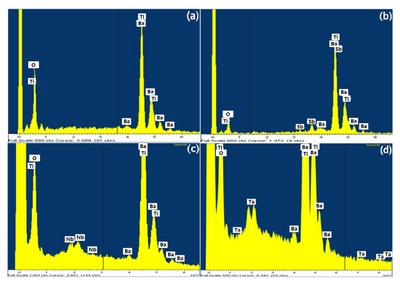 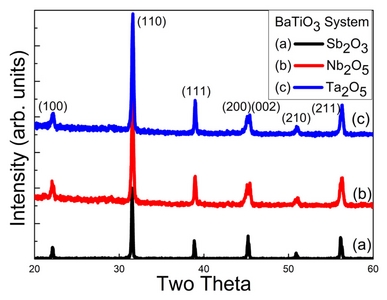 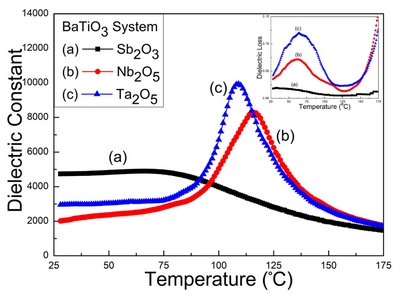 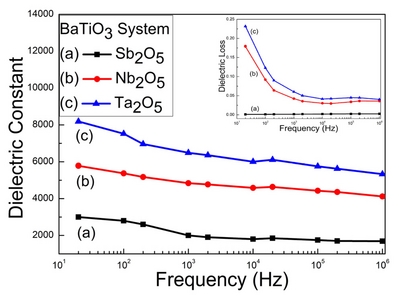 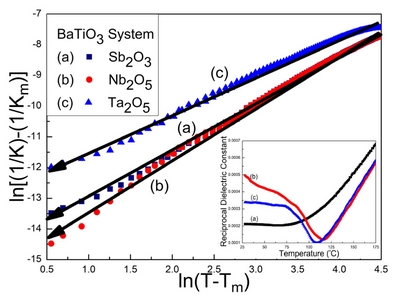