Ionic Conductivities and Melting Transition Studies of NaBHM4, KBH4, and Their Mixtures

As ionic conductivities are related to the intrinsic structural features of materials, they are useful for elucidating structural changes. Herein, the ionic conductivities of crystals of NaBH4, KBH4, and their mixtures are determined for the first time. The melting and decomposition temperatures of various compositions are also measured. Thermal studies indicate that both the hydrides are well-mixed chemically, which is accomplished through a solid-state reaction using a simple ball milling process. The melting temperatures of Na1-KBH4 complexes show large negative departures from linearity likely due to the formation of a new structural phase such as rhombohedral NaK(BH4)2. However, the ionic conductivities of Na1-KBH4 complexes exhibit only small deviations from linearity with varying values. The Na-rich samples of Na1-KBH4 exhibit fast ion conduction behaviors and the ionic conductivity of 3×10-3 Scm−1 is obtained at approximately 50 °C below the melting point.

In addition to hydrogen storage, a current challenge in the metal borohydride system involves the achievement of fast ion conduction before the occurrence of decomposition. Crystalline LiBH4 and related compounds are fast Li-ion conductors with promising applications such as electrolytes in all solid-state lithium batteries [7,8]. Ionic conductivities are related to the intrinsic structural features and reflect the structural changes. However, the ionic conductivities of NaBH4 and KBH4 crystals have not been measured till date. The aim of the present work is to study the melting and decomposition characteristics as well as the ionic conductivities of a solid solution of Na1-KBH4 with various compositions.

NaBH4 and KBH4 with nominal purities of 99 and 97 %, respectively, were purchased from Sigma-Aldrich (St. Louis, Missouri, United States) and used directly without pretreatment. Powder mixtures with nominal compositions of (1-)NaBH4 + KBH4 with = 0, 0.25, 0.5, 0.75, and 1 were mechanically milled using Spex Sample Prep 8000 mixer/mills for 2 h under 0.1 MPa argon. The sample handling and loading were performed in an Ar-filled glove box.

Thermal analysis was performed using differential scanning calorimetry (DSC; DSC-50, Shimadzu Corporation, Kyoto, Japan). The sample chamber was purged with purified nitrogen and measurements were carried out at a heating rate of 5 ° min−1 from 30 to 700 °C.

NaBH4 and KBH4 are tetragonal at low temperatures and transform into cubic phases at approximately −83 and −203 °C, respectively [9]. Recently, bialkali metal borohydrides, LiK(BH4)2 and NaK(BH4)2, were synthesized and reported to exhibit new structural phases [10]. Unfortunately, these borohydrides were not found to be promising for hydrogen-storage applications as the former is very stable to allow hydrogen release and the crystal structure of the latter is metastable [6].

To investigate the melting and decomposition characteristics of mixed Na1-KBH4 complexes, the DSC data were collected (Fig. 1). The melting peak of NaBH4 is centered at 502 °C, which is in excellent agreement with the reported values [3,4]. The decomposition peak is observed at 579 °C, and is also in good agreement with the reported values of 565 or 595 °C [4,11]. The melting and decomposition behaviors of KBH4 are similar to those of NaBH4 except that these temperatures for KBH4 are much higher (by approximately 100 °C). The melting peak of KBH4 is centered at approximately 610 °C, which is consistent with reported values of 607 or 625 °C [3,4]. The decomposition peak of KBH4 is observed at 664 °C, which is slightly lower than the reported value of 686 °C [4]. For all mixtures, identical melting and decomposition pathways are observed without the appearance of DSC peaks of pure NaBH4 and KBH4 crystals. This suggests that both hydrides are chemically well mixed via a solid-state reaction by simple ball milling. This is plausible because both NaBH4 and KBH4 have same cubic structures at high temperatures. NaBH4 has high structural stability under heavy deformation conditions imposed by milling [14].

The melting temperatures of Na1-KBH4 complexes show large departures from linearity as shown in Fig. 3. This type of negative departure is well known in mixed alkali glasses and crystals in which the properties related to structural relaxations exhibit negative deviations with varying concentrations [15,16]. However, the ionic conductivities of Na1-KBH4 complexes exhibit only small deviations from linearity with variation in , which are discussed later. The bialkali borohydride with = 0.5 (NaK(BH4)2), synthesized by mechanical milling, was reported to exhibit a new crystal structure with rhombohedral symmetry, most likely in the space group R3 [10]. Recently, another bialkali borohydride, LiK(BH4)2, was synthesized and was found to be highly stable up to 380 °C [17]. The new compound LiK(BH4)2 has a structure that is closely related to that of the orthorhombic LiBH4, and this new phase is present across the complete range of the reaction series of LiBH4 and KBH4. Accordingly, Na1-KBH4 is not just assumed to be a simple mixture of cubic NaBH4 and KBH4, but also includes the new phase such as the rhombohedral NaK(BH4)2. The decreases in the melting temperatures of the complexes with = 0.25 and 0.5 are likely due to the formation of new crystalline phases.

The ionic conductivities of Na1-KBH4 samples were measured in the cooling scan after the samples were annealed at temperatures of approximately 50 °C below the melting points. Figure 4 shows the results of the frequency-dependent complex impedance measurements for NaBH4. The complex plane spectrum consists of two parts, a high-frequency region owing to the electrical properties of the bulk and a low-frequency region characterized by a straight line because of the surface layer polarization. The high-frequency region can be approximated as a semicircle to determine the real part of the impedance , which corresponds to the ionic conductivity of the material. As the temperature increases, the bulk semicircle shifts toward a low value of impedance and high frequency. Consequently, for the frequency range covered, the electrode impedance becomes more dominant with an increase in temperature.

For alkali borohydrides, when the low-temperature tetragonal phase transforms to a high-temperature cubic phase, the orientationally disordered BH4 groups are observed [9,22]. The upward bend in the ionic conductivities is attributed to the onset of the reorientational disorder of the tetrahedral groups at high temperatures [23,24]. The reorientation motions of the borohydride ions can serve as an additional degree of freedom to enhance the cationic mobility, affording an increased conductivity at high temperatures. However, for the mixtures, no significant bend is observed in the Arrhenius plots and the activation energies are in the range of 1.40–1.80 eV, which belong to the high-temperature regime. This can be ascribed to the rotational disorder of the hydride ions at low temperature due to the highly disordered structure of the mixed system.

For all Na1-KBH4 complexes, identical melting and decomposition paths are observed, indicating that both hydrides are chemically well-mixed through a solid-state reaction using a simple ball milling process. The decreases in the melting temperatures of complexes with = 0.25 and 0.5 are due to the formation of new crystalline phases. A curvature is observed in the conductivity plots, which increases with an increase in temperature. This indicates that one transport mechanism is dominant at low temperature and another is dominant at high temperature. For the mixtures, no noticeable bend in the Arrhenius plots is observed, indicating that these are present in the high-temperature regime. The Na-rich samples of Na1-KBH4 exhibit fast ion conduction and the ionic conductivities attain a value of 3×10−3 Scm−1 at high temperatures. The anion mixing in complex hydrides may be a potential approach to achieve fast-ion conductivity, but we still need more studies how to lower the melting temperature and stabilize the fast-ion conducting structures in these compounds.

This work was supported by the National Research Foundation of Korea (NRF 2010-0022383). We would like to thank Editage () for English language editing. 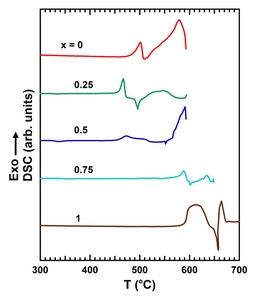 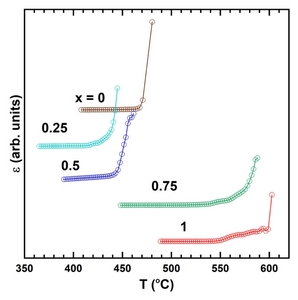 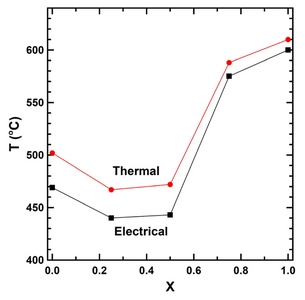 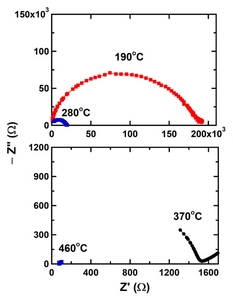 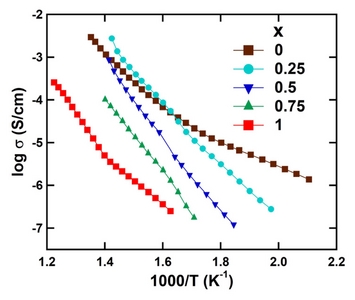