In this study, the Li+ ion emission characteristics of -eucryptite were investigated. The -eucryptite Li+ ion source does not exhibit outgassing in an ultra-high vacuum system, even at a high filament temperature, and the purity of the emitted Li+ ion beam is very high. The emitted current densities functions are in good agreement with the Richardson equation and Child-Langmuir model. The energy for Li+ ion to be extracted from a solid to a vacuum was measured to be 1.1 eV. This value means that Li+ ion can be easily extracted from solid to vacuum, i.e., -eucryptite is a good Li+ ion source. Finally, this study suggests a half-life time and ion current equation as a function of source temperature, source potential, and working time. The suggested equations can be used widely in various fields, including in the design and construction of a Li+ ion source (ion gun), especially for an ion scattering spectroscopy study.

It is well known that when -eucryptite (Li2O·Al2O3·2SiO2) [1] is heated, it emits an Li+ ion because of its negative coefficient of thermal expansion. Its linear coefficients in the crystallographic directions a and c are 8.21 × 10−6 and −17.6 × 10−6 °C−1, respectively [2]. Therefore, this material can be applied to produce a Li+ ion beam. Ion scattering spectroscopy (ISS) [3–5] is a good technique for the analysis of the composition and geometrical structure of a solid. In an ISS study, low-mass-number ions are used because heavy ions can destroy the geometrical structure of the target specimen. Typically, the He+ ion is used in low-energy ISS, but a complicated ion gun is needed to obtain the He+ ion beam. On the other hand, the Li+ ion has a low mass number, and it is a good ion for an ISS study to investigate the surface of a solid. There are many types of devices used to obtain ion beams in vacuum; however, because of the chemical activity of Li atoms, most devices are not suitable to obtain a Li+ ion beam in vacuum. -eucryptite is chemically stable in vacuum, even in the atmosphere. Although it is very difficult to produce a Li+ ion beam in vacuum because of its chemical activity, if we use -eucryptite we can obtain a Li+ ion beam by a very simple method, i.e., by only heating -eucryptite, and this source can be used in various research fields.

For the beneficial treatment of -eucryptite to produce Li+ ions, investigating thermionic Li+ ion emission characteristics is strongly suggested. This study investigated Li+ ion emission characteristics, such as the temperature dependence, source bias potential dependence, and working time dependence of the emission current. This study presents the emission equation as a function of source temperature, source potential, and working time.

To fabricate -eucryptite, Li2CO3, Al2O3, and SiO2 powders were mixed uniformly with molecular proportions of 1, 1, and 2. The mixed powder was made into briquettes by compressing it with a pressure of 1 t/cm2. The briquettes were heated to 2000 K using a tungsten filament in a vacuum chamber for several minutes. A sintering process is usually carried out in an inert gas atmosphere to prevent contamination or chemical reactions with impurities, including oxygen and nitrogen gases in air. If we use a vacuum chamber, we can prevent chemical reactions as well as the contamination of the specimen by oxygen, nitrogen, and other gases in the atmosphere. shows that this process reduces the carbonate to the oxide, yielding -eucryptite and CO2.

-eucryptite briquettes were ground into fine powder and painted onto the tungsten filament. The tungsten filament painted with the specimens was attached to a 70 conflict flange electric line feed and inserted into the vacuum chamber with a base pressure of ~10−7 Pa. A copper plate was placed in front of the filament to measure the emission current. To measure the elements emitted from the source, a residual gas analyzer (RGA) was placed 10 cm from the ion source.

The RGA can detect the relative quantities of emitted ions as well as neutral atoms as a function of mass number.

Figure 2 shows the Li+ ion current versus source temperature. The source potential is fixed at 100 V.

This figure shows the current increasing exponentially with increasing source temperature. This result can be explained by the thermionic emission equation (see described by the Richardson equation [8],

where is the emission current, is an emission constant, () is a transmission coefficient of the surface barrier, is the temperature in Kelvin units, and is the work function.

In the case of an ion, the work function ef should be replaced by another physical quantity that the emitting energy needs for an ion to be emitted from solid to vacuum. Then, the equation can be modified as follows:

It is difficult to know whether or not this result satisfies the Richardson equation, and we cannot estimate the emitting energy directly. However, as shown in , the logarithm of is helpful for detailed analysis.

If the result shown in Fig. 2 satisfies the Richardson equation, the plot of () versus should show a straight line, and the slope of the line should be .

Figure 3 shows the plot of () versus 1000/. As expected, this plot shows a straight line. Therefore, the emitted currents are in good agreement with the Richardson equation, i.e., the current is proportional to (−). The slope of line is −12.9, and the estimated energy determined using this slope is 1.1 eV. The work function of tungsten is 4.5 eV [9–10], and electrons are emitted when the pure tungsten filament cathode glows white. LaB6 is used as a good electron source, and its work function is 2.4–2.7 eV [11]. Comparing this result with a tungsten cathode and a LaB6 electron source, we can conclude that -eucryptite is a good Li+ ion source.

The emission current depends on the source potential as well as the source temperature. The Child-Langmuir model [12–14] explains the relationship between the current density and applied potential. The equation they derived is

Figure 4 shows Li+ ion current versus source potential when the source temperature is fixed at 1100 K. As expected, the plot line is not straight, but curved. For detailed analysis, we rearranged [see ].

Figure 5 shows the plot of () versus (). The slope of this plot is 1.47. This value is in good agreement with the theoretical value within reasonable error.

They derived this equation for two parallel plates, i.e., in a rectangular coordinate; however, our experimental system is not a rectangular coordinate. In this study, expressing the equation in spherical and cylindrical coordinates was attempted, and it was found that the equations obtained in the different coordinates have the same form, i.e., is proportional to [15]. Therefore, the results have good agreement with the Child-Langmuir model, i.e., the emitted current is proportional to .

where is a constant.

The number of Li atoms in the specimen is finite. Similar to radioactivity decay, the ion current decreases as in the following equation.

where is the time constant, and the half-life time is given by 1/2 =2.

Figure 6 shows normalized Li+ ion currents versus working time for the source temperature 1301 K and the source potential fixed at 100 V, in which exponential decay is demonstrated showing good agreement with . The fitting result shows that the decay constant is 444 min; thus, the half-life time is determined to be 307.7 min.

where is given by a function of source potential, and it is a constant when the source potential is fixed. The integrated result of shows that the total number of atoms in the specimen is

Therefore, the half-life time is given by

Combining the source temperature dependence and the source potential dependence, we conclude that the half-life time is given by

where is a constant determined by the dimensions of the Li+ source.

Note that the half-life time at a source temperature of 1100 K and source potential of 100 V was 10000 min, and the initial current was 10 A. Although the current depends on the source size (the dimensions of the source used in this study are 0.5 cm in length and 1.0 mm in diameter), if we assume the current to be 10 A, this lifetime is very long, and we can maintain a stable Li+ ion beam for a long time to carry out experiments.

Finally, this study suggests the emission current equation as a function of the source temperature, the source potential, and the half-life time

In this study, the Li+ ion emission characteristics of -eucryptite were investigated. The RGA results show that the -eucryptite Li+ ion source has no outgassing in an ultra-high vacuum system, even at high filament temperature, and the purity of emitted Li+ ion is very high. Experiments with the temperature dependence and source potential dependence of the emitted current densities showed that they are in good agreement with the Richardson equation and Child-Langmuir model. The Li+ ion-emitting energy was measured to be 1.1 eV. This value means that Li+ ion can be extracted easily from solid to vacuum, i.e., -eucryptite is a good Li+ ion source. The suggested half-life time equation (temperature and potential dependent) and ion current equation (temperature, potential and working time dependent) are very useful for the design and construction of a Li+ ion source (or ion gun). In particular, this low mass number Li+ ion beam is very useful for an ISS study because an incident heavy ion can destroy the surface structure of target material. However, these results can be applied widely in various fields. 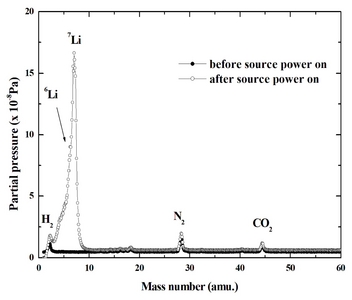 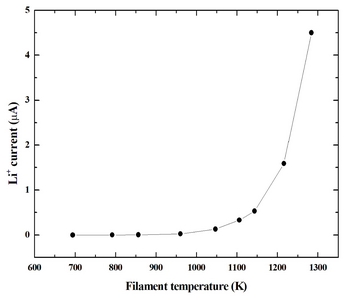 Fig. 2. Li+ current versus source temperature. The source potential is fixed at 100 V. 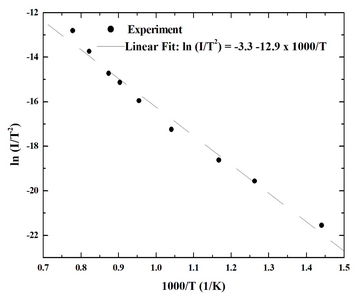 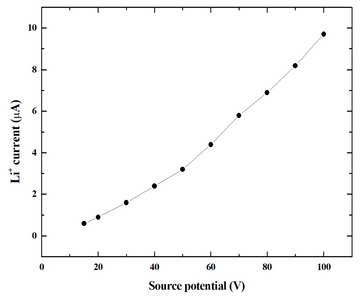 Fig. 4. Li+ current versus source potential when the source temperature is fixed at 1100 K. 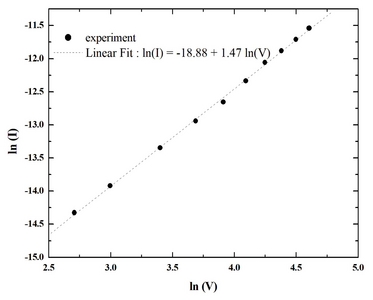 Fig. 5. () versus (). Closed circles denote experimental data, and the dotted line is the linear fitting result. 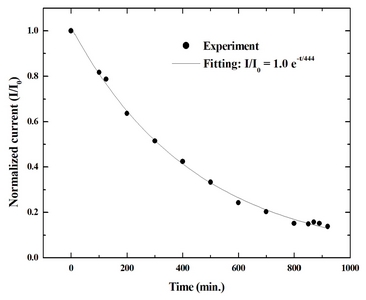 Fig. 6. Normalized Li+ currents versus working time at a source temperature of 1301 K and source potential fixed at 100 V. 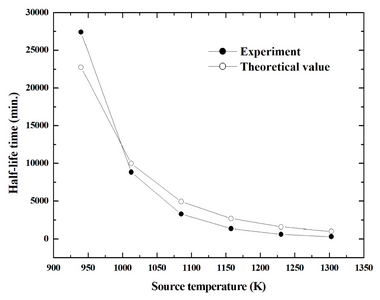 Fig. 7. Half-life times versus source temperature. The source potential is fixed at 100 V.