Owing to rapid climate change and increasingly stringent carbon regulations, carbon dioxide detection is becoming more important. In this study, we fabricate a cucurbit[6]uril-functionalized gold nanorod-based localized surface plasmon resonance (LSPR) gas sensor to detect carbon dioxide. The gold nanorods provide a high refractive index unit that enables the measurement of gas molecules with low molecular weights, while cucurbit[6]uril is a chemical receptor that binds to carbon dioxide owing to its structural characteristics. Therefore, cucurbit[6]uril was functionalized through direct adhesion on the surface of gold nanorods, which was replaced with citrate. The manufactured sensor can detect the presence of carbon dioxide at a maximum concentration of 400 ppm in the atmosphere. The high potential applicability of the cucurbit[6]urilapplied LSPR gas sensors is demonstrated in this study.

Among the various gases that constitute the atmosphere, gases such as carbon dioxide, methane, nitrous oxide, freon, hydrofluorocarbons, perfluorocarbons, sulfur hexafluoride, and ozone contribute to the greenhouse effect [1, 2]. The greenhouse effect prevents the release of heat captured from the absorption of solar energy by the Earth [3, 4]. This phenomenon was discovered in 1824 when the French mathematician calculated that the Earth would be much colder without an atmosphere [5]. The Swedish scientist reported in 1896 that a warming effect is linked to the increase in carbon dioxide gas from the use of fossil fuels [6]. Likewise, in the 20th century, studies have reported that the increase in carbon dioxide is associated with the increase in global temperature [7, 8]. Recently, researchers have reported that the increase in greenhouse gas concentrations causes critical effects such as extreme weather events, rising sea levels, changes in animal populations, and an increase in the average global temperature [9–11]. Carbon dioxide, methane, nitrous oxide, hydrofluorocarbons, perfluorocarbons, and sulfur hexafluoride were identified as the six major greenhouse gases at the 3rd Conference of the Parties [12]. Among these gases, carbon dioxide accounts for more than 80% of the total greenhouse gas emission and is considered to be the most noteworthy greenhouse gas [5]. In particular, the highest carbon dioxide concentration of 411 ppm was detected in 2018 at the Mauna Loa atmospheric baseline observatory in Hawaii [13]. Because carbon dioxide can remain in the atmosphere for hundreds of years, measures must be taken to slow down global warming [14].

European emission standards are examples of typical carbon dioxide regulation policies [15]. The first stage of these standards was implemented in 1992, and the regulatory standards have now been strengthened to the sixth stage while the implementation of the seventh stage is currently under discussion. Under these policies, the level of carbon dioxide emitted by automobiles was reduced from 130 g/km in 2015 to 95 g/km in 2020 [16]. Carbon dioxide reduction has been discussed and implemented not only in automobile-related policies but also in other fields. Carbon dioxide is mainly produced by the burning of fossil fuels and organic matter such as coal, oil, gas, wood, and solid waste [17]. Because carbon dioxide is produced in almost every essential part of the global economy, including industry, agriculture, transportation, and electricity generation, it is imperative to reduce the use of fossil fuels across all regions [18]. In particular, when Korea joined the Paris Climate Agreement, it set the goal of reducing carbon dioxide production by 24.4% with respect to the carbon dioxide production in 2017 by 2030. Because carbon dioxide accounts for 88.6% of the total greenhouse gas emissions in Korea, the detection of carbon dioxide has gained increased prominence [19]. Sensors that use chemical reactions, which is one of the conventional methods for detecting carbon dioxide, has the disadvantage that the measurement limit is on the order of several ppm [20, 21]. Another method for detecting carbon dioxide is to use a nondispersive infrared gas sensor. This sensor is based on the principle that each gas has a specific infrared absorption spectrum (e.g., carbon dioxide absorbs at 4.26 µm); hence, it has high selectivity because it detects the gas based on its specific spectrum [22, 23]. Nonetheless, this sensor faces the limitations of being expensive and difficult to miniaturize.

In this study, we fabricated a gas sensor based on localized surface plasmon resonance (LSPR) that is capable of detecting carbon dioxide. cucurbit[6]uril (CB6) molecules are applied on a gold nanorod (AuNR) substrate to form the sensor. Because of their structural characteristics, gold nanorods have a higher refractive index unit than the more widely used gold nanoparticles (AuNPs) [24–26]. This allows the nanorods to be used for the sensitive detection of gases such as carbon dioxide (CO2). Cucurbituril is a pumpkin-shaped macrocyclic molecule that contains glycouryl monomers linked by a methylene bridge. The cucurbituril molecules are named according to the number of linked glycouryl monomers (e.g., cucurbit[5]uril, cucurbit[6]- uril, cucurbit[7]uril). Each molecule has its own characteristics. In particular, cucurbit[6]uril possesses alkyl chains that form hydrophobic cavities and allow for hydrophobic interactions. cucurbit[6]uril interacts with cationic guests through the cationic dipole interaction at a carbonyl portal. These characteristics allow cucurbit[6]uril to detect various gases, such as carbon dioxide, and have great promise in the field of gas encapsulation and storage because they enable the sequestering of specific molecules within intrinsic internal cavities [27]. In this study, the detection of standard carbon dioxide gas by a cucurbit[6]- uril-functionalized gold nanorod-based LSPR gas sensor prepared in the above method is demonstrated. In addition, the possibility of detecting carbon dioxide present in exhaled breath using the LSPR gas sensor is also confirmed. The above experimental results illustrate the effectiveness of the cucurbit[6]uril-functionalized gold nanorodbased LSPR sensor and its considerable potential for carbon dioxide detection.

AuNRs were synthesized using a seed-mediated growth method based on a previously published protocol [24]. To prepare the goldseed solution, 250 µL of HAuCl4 (10 mM) was added to 7.5 mL of CTAB (93 mM). 0.6 mL of NaBH4 (10 mM) was then added to the mixture with vigorous stirring. After being left to react for 2 min, the mixture was stored at room temperature for 2 h. To prepare the growth solution, 80 µL of AgNO3 (10 mM), 0.5 mL of HAuCl4 (10 mM), 55 µL of ascorbic acid (100 mM), and gold-seed solution (12 µL) were added in sequence to 9.5 mL of CTAB (93 mM). The mixture was stored at room temperature for 3 h. Subsequently, the resultant CTABAuNR was centrifuged for 30 min to remove excess CTAB molecules and then re-dispersed in DI water. The CTAB-AuNRs were then subjected to three rounds of centrifugation and resuspension with 0.15 wt% PSS. The resultant PSS-functionalized AuNRs were then subjected to two additional centrifugation cycles with sodium citrate (5 mM) to allow the exchange of PSS with citrate and produce stable dispersions of citrate-AuNR.

The AuNR substrates for the LSPR gas sensor were fabricated using a previously described method [24]. A round glass substrate (12 mm φ) was cleaned using piranha (H2O2:H2SO4 = 1:3) and DI water solution. To immobilize the AuNRs, the substrate surface was functionalized with amino groups by immersing the glass substrate in 1 mL of 4% APTMS solution for 30 min. After the reaction was completed, the substrate was rinsed with ethanol and DI water to remove the residue and then baked at 60 °C. Next, the APTMS-functionalized substrate was immersed in 1 mL of the AuNR solution for 1 h and then washed with DI water.

The LSPR spectra were measured using our custom-made LSPR system, which comprised a light source, a collimating lens, and a spectrometer. White light from a tungsten-halogen light source (HL-2000- FHSA-LL, Ocean Optics) with a 2 mm beam diameter traveled past the collimating lens and the tilt mirror to reach the substrate placed on the stage of the LSPR system. The light that penetrated the substrate was analyzed using a spectrometer (QEPRO-ABS, Ocean Optics). The LSPR spectra at different regions of all the AuNR substrates were measured at least five times to confirm the reproducibility and repeatability of the LSPR gas sensor measurements.

The fabrication method of the CB6-functionalized AuNR-based LSPR gas sensor and the strategy for detecting carbon dioxide are described in Fig. 1. Plasmons were induced using the AuNRs to apply the LSPR substrate as a gas sensor. Although AuNRs are commonly stabilized with CTAB or polyethylene glycol (PEG), here, we used PEG-free AuNRs based on our previously published study [24]. The AuNRs were immobilized on a bare glass substrate. In addition, cucurbit[6]uril was used as a key component for the detection of carbon dioxide. CB6 is composed of six glycouryl monomers linked by a methylene bridge. The high electron density of the carbonyl portal in CB6 allows electrostatic interactions with materials such as cations and metal surfaces. These features have gained increasing attention in applications that range from nanoparticle synthesis and assembly to plasmon-assisted molecular sensing. The direct interaction of cucurbit[ n]uril with gold was first established through the transmission electron microscopy and ultraviolet-visible characterization observation of coagulate formation in which cucurbit[n]uril acted as an adhesive between adjacent gold nanoparticles [28]. The interparticle spacing between neighboring nanoparticles was found to be approximately 0.9 nm, which is consistent with the height of the cucurbit[n]uril molecule [29]. A CB6-functionalized AuNR-based LSPR gas sensor was fabricated using the above process. The LSPR absorbance peak is sensitive to the plasmons formed in the environment around the gold nanorod. As a result, carbon dioxide can be detected by analyzing the LSPR spectra of the CB6-functionalized AuNR-based LSPR gas sensor using our laboratory-made LSPR system. 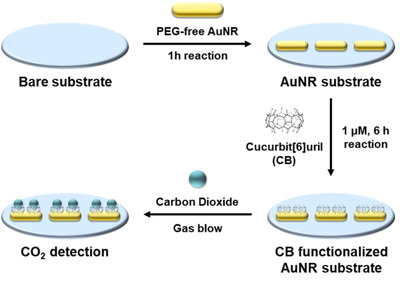 The performance of AuNRs as LSPR gas sensors was evaluated through a comparison with AuNPs. Figure 2 shows the absorbance wavelengths of the AuNRs and AuNPs measured using a UV-Vis spectrometer. The maximum peak wavelength of the AuNPs was 520 nm. The diameter of AuNPs with the maximum peak wavelength of 520 nm is widely known to be 20 nm, as can be verified in Figs. 3(a) and 3(b). The gold nanorods exhibited two structural peaks at 512 and 785 nm. The two peaks indicate that the nanostructure had a rod-like shape, as can be confirmed from Figs. 3(c) and 3(d). Figure 3 shows scanning electron microscopy images of the fabricated AuNP and AuNR substrates, from which it can be confirmed that uniformly synthesized nanostructures were well dispersed on the substrates. 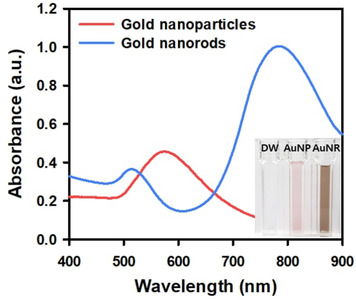 Figure 2. Comparison of the absorbance spectra of gold nanoparticles and gold nanorods. Inset shows the cuvette photographs of the AuNPs and AuNRs. 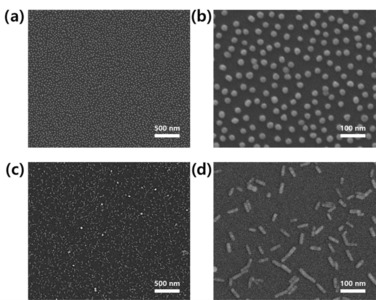 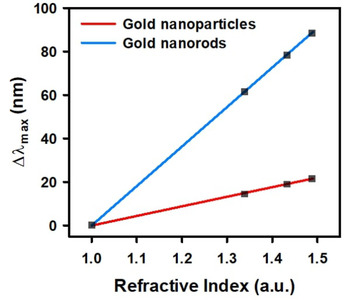 The nanoplasmonic substrate was functionalized with CB6 to detect carbon dioxide. Figure 5 shows the characterization of CB6. The size of cucurbituril molecules is typically on the order of 10 Å. The cavity of CB6 has a height of approximately 9.1 Å, an outer diameter of approximately 5.8 Å, and an inner diameter of approximately 3.9 Å. Mohan [30] recently performed quantum mechanical calculations to investigate the adsorption strength and selective adsorption of carbon dioxide in CB6 cavities. They found that although both the interior and exterior of CB6 can adsorb carbon dioxide, the most powerful adsorption site is at the center of the pores. This implies that the interior of CB6 is more important than the exterior for detecting carbon dioxide. In other words, the efficiency of carbon dioxide detection is maximized when the CB6 molecules are densely arranged. 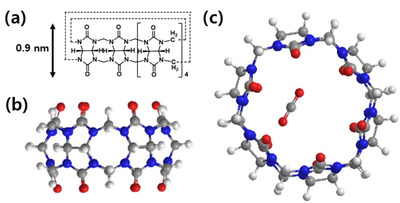 Following a previous study [30], weimmobilized CB6 directly on gold nanorods. In Fig. 6, we analyze CB6 in various reacting time to determine the saturation condition. In the experiment, a 6.33±0.57 nm peak shift occurred in 3 h, a 9.38±0.68 nm shift in 6 h, a 13.37±0.69 nm shift in 12 h, and a 16.76±0.45 nm shift in 24 h. The maximum peak wavelength shift (Δλmax) was calculated from the LSPR spectra measured using the custom lab-made LSPR system. The relative shift was calculated as Δλmax (nm) = λmax(AuNR−CB6) - λmax(AuNR), where λmax(AuNR−CB6) is the maximum peak wavelength of the CB6-functionalized AuNR and λmax(AuNR) is the maximum wavelength of the bare AuNR. As a result, we applied 24 h condition to the nanoplasmonic substrate for the fabrication of the CB6-functionalized AuNRbased LSPR gas sensor. 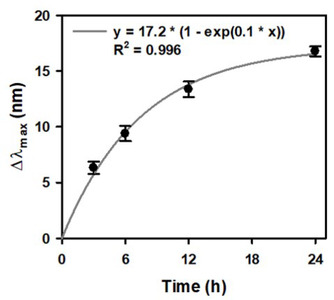 Figure 6. Immobilization condition of cucurbit[6]uril on gold nanorods. CB6 with 10 µM concentration was reacted for 3, 6, 12, and 24 h, respectively. 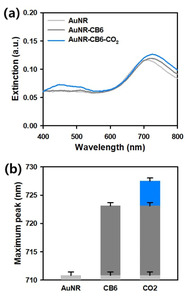 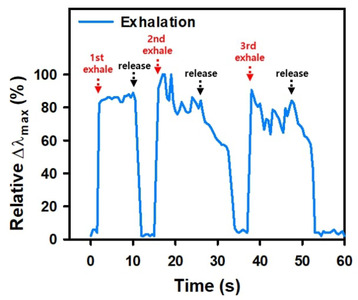 Figure 8. Detection of carbon dioxide in exhaled breath. Exhalation was performed for 10 s, and measurements were repeated 3 times.