With the advance of exploitation on new energy resources, energy-storage technology correspondingly acts a significant role in our life. Capacitors as well as batteries known as two kinds of essential energy-storage devices are now researched by numerous experts. In comparison with batteries, capacitors possess an even higher power, and the basic construction of capacitors is a sandwich structure of anode/dielectrics/cathode. The capacitances of the capacitors can be characterized by = 0·r·/, where is the capacitance, 0 is the dielectric constant in vacuum, r is the dielectric constant of the dielectrics in capacitor, is the thickness of the dielectrics, and is the effective surface area of the electrode. Al electrolytic capacitor as one kind of economic and environment-friendly energy-storage device has been widely applied in electronics used in defense, aerospace, and transportation fields, etc. The key part of Al electrolytic capacitor is the Al2O3 dielectrics formed by anodization in various electrolytes such as phosphoric acid solution [1], boric acid solution [2], malonic acid solution [3], ammonium penta-borate solution [4], and citric acid solution [5], etc. Anodization is an economic and convenient approach for the formation of Al2O3 layer, in which the Al2O3 is formed by the combination of O2− ions and Al3+ ions, starting at the both Al/native Al2O3 and native Al2O3/electrolyte interfaces. The properties of formed Al2O3 can be determined by the anodization modes consisting of galvanostatic and constant potential. In addition, the electrolyte parameters also act as a significant role in anodization process. The parameters of electrolyte during anodization such as temperature, pH, conductivity, and viscosity, etc. can largely affect the performances of Al2O3 on microstructure and electrical properties, and a lot of outstanding researches have handled these topics [6–8]. However, an eager requirement for the study of the electrolyte used for anodization of Al foils worked in high-voltage field is salient.

The composition and type of the electrolyte used for anodization significantly affects the anodizing efficiency and electrical properties of the Al foils. Although many electrolytes have been extensively researched [5,9–12], the withstanding voltages of anode foils formed by these electrolytes are still relatively low. So, organic electrolyte has received attention to further increase the withstanding voltage. Kinard . showed that when Al foils were anodized in borate polyester, which is a compound of boric acid and 2-methyl-1, 3-propanediol (MPD), a significantly high withstanding voltage, even higher than 3000 V, could be obtained [13]. Based on our previous work, MPD-boric acid electrolyte used for high-voltage anodization can effectively inhibit the micro-arcs caused by oxygen evolution when anodization is conducted at high voltage (over 700 V) [14].

ZrO2 shows a much higher permittivity of 22 – 25 than 9.8 of Al2O3 [15], which could effectively enhance the specific capacitance (p) by enlarging the r of the dielectrics in conventional Al electrolytic capacitor. Simple and convenient sol-gel process was selected to prepare the ZrO2-coated Al foils. ZrO2-coated Al foils were anodized to secure appropriate withstanding voltage and ZrO2-Al2O3 (ZAO) composite oxide. It was generally accepted that the temperature of an electrolyte used for anodizing aluminum is one of important factors which determines the type of oxide grown on the surface. In this work, the effects of anodization temperature of MPD-boric acid electrolyte on the microstructure and electrical properties of the ZrO2-Al2O3 dielectrics formed on the etched Al foils were studied.

Etched Al foils (99.99 %, thickness: ~125 μm, hole density: ~2.0 × 107 cm−2, hole diameter: 1 – 2 μm, and hole length: 20 – 50 μm) were placed into alcohol (purity: 99.5 %) and ultrasonically cleaned for 20 min to remove surface contaminants. ZrO2 sol of 0.8 M were prepared by mixing zirconium butoxide (Zr(OC4H9)4, 80 wt% in 1-butanol, Sigma-Aldrich, USA), 2-methoxyethanol (CH3OCH2CH2OH, anhydrous, 99.8 %, Sigma-Aldrich, USA), acetic acid (CH3COOH, 99.7 %, Daejung Chemicals & Metals, Korea), and nitric acid (HNO3, 60~62 %, Daejung Chemicals & Metals, Korea). Finally, the transparent precursors were aged for 3 days. The ZrO2 sol was coated on the surface of the etched Al foils by vacuum infiltration, which can be described in detail as a bath with Al foils was placed into a chamber, thereafter, evacuation was carried out. Subsequently, ZrO2 sol was injected into the bath, followed by ventilated and the etched Al foils were lifted from the ZrO2 sol bath. The ZrO2 film on the etched Al foils was dried at 100 °C for 1 h and annealed at 500 °C for 10 min in ambient environment. The same coating process was repeated four times to achieve the optimal thickness. Subsequently, the ZrO2-coated Al foils were firstly anodized at a mode of constant current (0.1 A/cm2) until the settled voltage (700 V), subsequently, the anodization at a fashion of constant voltage was carried out, lasting until the current flowing through the sample is 0.01 A in MPD-boric acid electrolyte of 30, 60, and 90 °C, respectively. The anodization electrolytes were MPD:boric acid electrolyte (100 g of H3BO3/1 L of H2O) with volume % ratios of 3:10. The MPD-boric acid electrolyte must be kept at greater than or equal to 30 °C to avoid the precipitation of boric acid [Fig. 1(a)]. Lastly, the anodized samples were annealed in a furnace of 500 °C for 2 min for characterization.

Crystalline structure of the oxide layer formed on the Al foils was analyzed using X-ray diffraction (XRD, X’pert Pro MRD, PANalytical). The cross-sectional structures of the coated layer and anodized oxide layer were characterized using field emission-scanning electron microscopy (FE-SEM, JSM-6700E, Jeol) and field emission-transmission electron microscopy (FE-TEM, titan G2 ChemiSTEM Cs probe) performed at 200 kV. The SEM samples were prepared by polishing the anodized Al foils and eroding them for 3 min in KOH solution. The TEM samples were thinned with a focused ion beam (FIB, versa 3D LoVac) to a thickness of about 100 nm. The elemental distributions of the samples were examined by TEM coupled to energy-dispersive X-ray spectroscopy (EDS). The cyclic voltammetry (y) were conducted from −2 to +2 V at sweep rate of 1 V/s using a three-electrode system (Ag/AgCl reference electrode, working electrode connected with samples, and Pt counter electrode) connected with a digital analyzer (VersaSTAT 3, Princeton Applied Research) and signals were monitored by a computer. The withstanding voltage and leakage current of the samples were measured using a source meter (2410, Keithley) and the capacitance were determined utilizing an impedance/gain phase analyzer (4194A, Hewlett-Packard) in (NH4)2B10O16·8H2O aqueous solution of 80 g/L at 30 °C.

Figures 2(a)–(c) shows the SEM cross-sectional images of the dielectric oxides formed inside etch pits at different temperature. A compact combination between the coated ZAO layer (inner) and deposited Al2O3 layer (outer) is shown in each sample. The Al2O3 grows at both Al/ZrO2 interface and ZrO2/electrolyte interface by the transport of Al3+ coming from etched Al foils and O2− coming from electrolyte under electric field. The outer Al2O3 layers demonstrates that the formation of Al2O3 is principally depending on the transport of O2− ions under the driving force given by the electric field, further implying that the O2− penetration in ZrO2-coated layer is much easier than Al3+. The total thicknesses of the dielectric oxides are approximately 625, 680, and 750 nm, increasing with enlargement of the conductivity at higher temperature. The electrolyte with a higher ionic resistivity of 1.8 Ω/cm at 30 °C can inhibit the ionic transport even more largely than the electrolyte with ionic resistivity of 1.2 Ω/cm at 90 °C. After anodization at 30, 60, and 90 °C, the thicknesses of the Al2O3 layer were approximately 440, 590, and 625 nm, respectively. The ratio between the thickness of anodized Al2O3 layer and the anodizing voltage, K, has been reported to be approximately 1 nm/V in pure Al [5]. In this work, these ratios were approximately 0.62, 0.84 and 0.89 nm/V after anodizing at 30, 60, and 90 °C, respectively. Lower K value in ZrO2-coated Al compared with Al specimens results from a hindrance in the movement of Al3+ and O2− ions through ZrO2 layer.

Figures 3(a) and 3(b) show the TEM cross-sectional images and diffraction patterns of the Al2O3 formed in MPD-boric acid electrolyte at 30 and 90 °C, respectively. The crystallinity of the Al2O3 anodized in the electrolyte of 30 °C is evidently higher than that formed in the electrolyte of 90 °C as corroborated by the diffraction patterns and visible Al2O3 grains in Fig. 3(a). This result also well agrees with the trend in the XRD diffraction patterns [Fig. 2(d)] that the anodization in the electrolyte of low temperature can effectively optimize the crystallization of Al2O3. A well crystallized samples could possibly raise the r of the dielectrics. The micro-cracks marked with arrows in Al2O3 formed in the electrolyte of 30 °C [Fig. 3(a)] are not shown in sample anodized in the electrolyte of 90 °C [Fig. 3(b)], strongly proving that these micro-cracks are caused in the anodization process rather than in annealing process at 500 °C conducted after anodization. These micro-cracks may be associated with the tension generated by volume expansion in crystallization process. Indeed, the volume expansion accompanied by mechanical stresses is generated in anodization process [19]. Figure 3(c) shows the TEM-EDS depth profiles of the O, Al, and Zr species in the sample anodized in the MPD-boric acid electrolyte of 90 °C. A profile of multi-layer structure from etch pit to Al substrate is viewed, which is Al2O3 layer of about 30 nm, ZAO composite layer of about 100 nm, Al2O3 layer of about 700 nm, and Al substrate. The thickness of the dielectrics is slightly thicker than the thickness obtained from SEM images [Fig. 2] due to the corrosion in the KOH solution during the preparation process of the samples for SEM measurement. The EDS result further corroborates the anodization process mentioned above that O2− ions ionized from the electrolyte transport through the ZrO2 coated layer to bond with Al3+ ions dissolved from the etched Al foils. Simultaneously, slight Al3+ ions dissolved from Al foils diffuse to the electrolyte through the ZrO2 coated layer to form Al2O3. The Al2O3 layer mostly is formed at the interface of ZAO composite layer/Al substrate, well agrees with the microstructure in the SEM images [Fig. 2].

Figure 4 shows the HRTEM images of (a) Al2O3 layer and (b) ZrO2 in ZAO composite layer anodized at 30 °C. The resolution of the HRTEM used in this study is 0.08 nm. The measured interplanar spacing of the Al2O3 and separated crystalline ZrO2 is 0.45 and 0.295 nm, respectively. These values are matched with the interplanar spacing of cubic Al2O3 (111) and tetragonal ZrO2 (101). Al2O3 layer is crystallized with clear lattice, but ZAO composite layer is composed of crystalline ZrO2 and amorphous Al2O3 as shown in our previous report [20].

This research was supported by Basic Science Research Program through the National Research Foundation of Korea (NRF) funded by the Ministry of Education (2017033541). 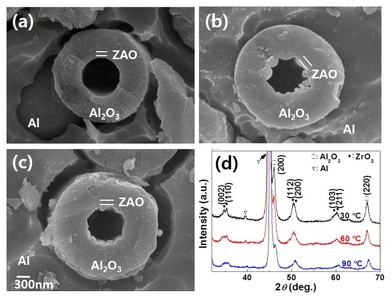 Fig. 2. (Color online) SEM cross-sectional images of the oxide anodized at (a) 30, (b) 60, and (c) 90 °C. (d) XRD diffraction patterns of the samples anodized at different temperatures. 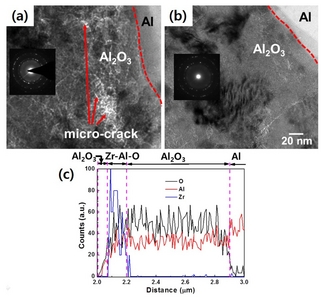 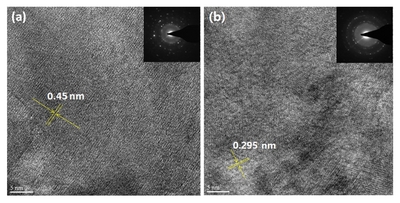 Fig. 4. (Color online) HRTEM images and diffraction patterns of (a) Al2O3 and (b) ZrO2 in ZAO composite oxide layer formed at 30 °C. 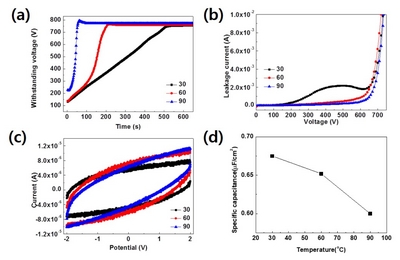