Mutual calibration with length-unit traceable and zero-offset methods has been recently suggested as a reliable method to determine the absolute thickness of the ultra-thin oxide films. In this study, the thickness of the TiO2 film on Si (100) substrate was determined using the mutual calibration method. A series of ultra-thin TiO2 films were fabricated via atomic layer deposition. The thicknesses of the TiO2 films were measured by X-ray photoelectron spectroscopy (XPS), transmission electron microscopy (TEM), and medium energy ion scattering spectroscopy (MEIS). The absolute thickness was determined by mutual calibration using a combination of high-resolution (HR)-TEM and MEIS. The thickness was also measured by mutual calibration employing a combination of HR-TEM and XPS to compare the two zero-offset methods (XPS and MEIS). A large offset difference of 0.45 nm was observed between the two data. This was related to the difference in the escape depth of the photoelectrons from the film and substrate in XPS analysis due to the surface contamination layer.

The thickness measurement of ultra-thin oxide films is an important metrology issue in the fabrication of next-generation electronic devices [1-3]. Although various kinds of thickness measurement methods such as spectroscopic ellipsometry (SE), x-ray reflection (XRR), transmission electron microscopy (TEM), Rutherford backscattering spectrometry (RBS) and medium energy ion scattering spectroscopy (MEIS) have been investigated, it has been reported that the absolute thickness of ultra-thin oxide films is difficult to measure due to the large offset values [4].

A mutual calibration method has been suggested as a method to solve the problem of the large offset values in the range of 0.5 ~ 1.0 nm. This is based on the combination of a length-unit traceable method (such as TEM and XRR) and a zero-offset method (such as X-ray photoelectron spectroscopy (XPS) and MEIS). The large offset values in TEM and XRR can be calibrated by the zero-offset methods and the thickness can be traceably calibrated by the length-unit traceable methods [1]. Thickness measurements of SiO2 [1], Al2O3 [5], and HfO2 [6] films by mutual calibration with XPS and TEM have been reported. Recently, thickness measurement of HfO2 films by mutual calibration with MEIS and TEM was also reported [7].

Titanium dioxide (TiO2) films have been widely used in the fields of solar cells [8], electronic devices and capacitors [9,10] because of their high dielectric and high band gap semiconductor (Eg = 3.2 eV) [11,12]. In this study, thickness measurement of ultra-thin TiO2 films grown by atomic layer deposition (ALD) was investigated. The film thickness could be precisely controlled in the ALD process by self-limiting [13-15].

MEIS is a unique method for the thickness measurement and quantitative depth profiling analysis of ultra-thin layers [16-18]. In this paper, the thicknesses of the TiO2 films on Si (100) substrates were measured by TEM, XPS, and MEIS. The thicknesses of the TiO2 films were determined by mutual calibration with MEIS and TEM. A large discrepancy in the offset values due to the surface contamination layer was observed in a comparison of the thicknesses measured by XPS and MEIS. Although XPS has been reported as a useful zero- offset method, the surface contamination layer should be well eliminated for the precise thickness measurement of ultra-thin oxide films.

A series of TiO2 films were grown on a n-type single side polished Si (100) substrate by the atomic layer deposition method. Titanium (Ⅳ) isopropoxide (TTIP) and water (H2O) were used as a precursor and a reactant, respectively. Five TiO2/Si (100) films with different thickness were deposited using Atomic Shell (CN1, Korea). Prior to TiO2 deposition, the Si (100) substrate was cleaned by a RCA solution [19] and the surface native oxide was eliminated by a diluted HF solution. The wafers were diced into small specimens with a size of 10 mm × 10 mm. The deposition temperature was set to 200 °C and the processing cycle consisted of a 0.3 s pulse of TTIP for TiO2 deposition with a 15 s purge pulse of N2 and a 0.3 s pulse of H2O with a 15 s purge pulse of N2. The thicknesses of the TiO2 films were controlled by the deposition cycles of 20, 40, 60, 80, and 100 cycles, respectively. 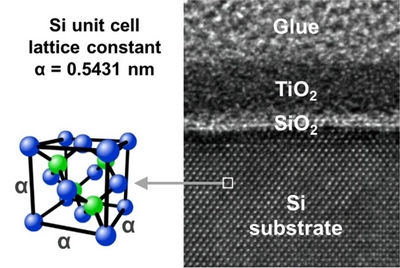 In the IP method, the contrast intensity profile is smoothened first by averaging the intensities of the nearest eleven points. The film thickness is determined from the distance between the inflection points in the differential intensity line profile, as shown in Fig. 2(c). Here, the locations of the SiO2/TiO2 and TiO2/glue interfaces to determine the thicknesses is determined at the minimum (F1) and maximum (F2) points in the differential profile, respectively [21].

Figure 3 shows the HR-TEM images of the five TiO2/Si (100) films grown by ALD during 20, 40, 60, 80, and 100 cycles. Although the contrast difference between the native SiO2 layer and the TiO2 layer is large enough to distinguish them, the locations of the interfaces and surfaces are not easy to determine. For reliable thickness measurement of the films by TEM, more than five images were measured at different points. 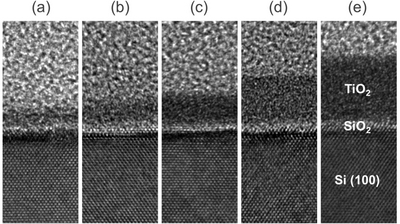 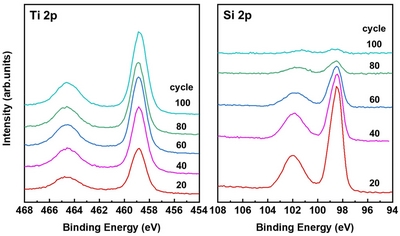 where is the attenuation length of the photoelectrons from the films, θ is the electron emission angle from the surface normal, and R0 is the ratio of the intensities from the pure bulk material and the substrate material. and were directly obtained from the peak areas of the Ti 2p and Si 2p peaks of a thick TiO2 film and a cleaned Si(100) wafer, respectively.

The intensity ratio of pure Si and pure SiO2 was reported to be 0.852. This value was used in this study. The signal intensities of and were determined from the Si 2p spectra of the TiO2/Si (100) films from the following equations [6]:

and should be determined from experimental measurement under the same experimental geometry and experimental conditions. In this study, the experimental values of and θ were 2.218 and 45°, respectively. The inelastic mean free path of 2.365 nm calculated by the TPP-2M equation [22,23] was used as the value of the electron attenuation length L.

The thicknesses of the TiO2 films were measured by a MEIS system (K-120, KMAC, Korea). He+ ion beam with a voltage of 100 keV was used at an incident angle and a scattering angle of 45° and 130°, respectively. In MEIS, the energy of the scattered He ions depends on the mass of the target elements and the scattering depth [16,24]. The number of the scattered ions is proportional to the number of constituent elements of the oxide layer from the scattering cross section. Therefore, if the composition of the elements is uniform with depth in the oxide layer, the thickness of the oxide layer will be related with the number of elements. In the thickness measurement of the TiO2/Si (100) films by MEIS, the signal intensity of the substrate can be a basis for thickness measurement because the number density of the crystalline Si substrate is constant. Figure 5 shows the MEIS spectra of the TiO2/Si (100) films. The thicknesses of the TiO2/Si (100) films can be determined by the mutual calibration method. The relative intensity ratios ( = ) of the film material () to the substrate () can be converted to the thicknesses () of the TiO2 films by the following equation: 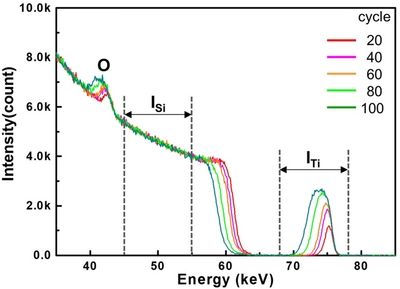 The offset value c means the excess thickness when the real thickness is close to zero and the slope m is the thickness scale of the measured film thickness. The certified thickness (Tc) of the films can be determined from the calibrated thicknesses by the following relations [1]:

3.1. Absolute film thickness by MCM with MEIS and TEM

Table 1 . MEIS intensity ratios of TiO2 films and thicknesses by TEM with IP and AC methods. 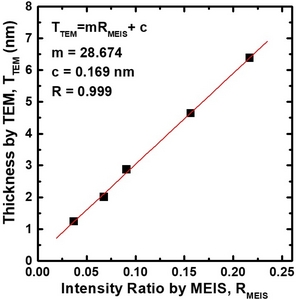 Figure 6. Linear plot between the thicknesses by TEM and MEIS intensity ratios of the TiO2/Si (100) films.

3.2. Thickness measurement by MCM with TEM and XPS

The thickness of the TiO2/Si (100) films was also measured by mutual calibration with XPS and TEM, as shown in Table II. Figure 7 shows the linear fitting results for the thicknesses by XPS and TEM determined by the IP method. The results of the linear fit show a slope value of 1.053 and an offset value of -0.275 nm, respectively. The calibrated thickness by XPS and TEM can be determined by the mutual calibration method from the equations and

Table 2 . Thicknesses of the TiO2/Si (100) films measured by XPS and TEM with IP method. 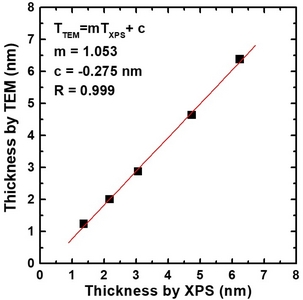 Figure 7. Linear plot of the thicknesses of the TiO2/Si (100) films measured by TEM and XPS.

The calibrated thicknesses by XPS are much thicker than those by MEIS in the range between 0.34 to 0.62 nm, which corresponds to a difference range from 5.3 to 26.4 %. This large difference is related with the difference in the offset values of XPS and MEIS. The linear fitting of the thicknesses by XPS and MEIS calibrated by TEM thicknesses determined by the IP method shows a large offset mismatch of 0.45 nm, as shown in Fig. 8. The thickness by MEIS is correctly proportional to the number of the constituent atoms in the film material. However, the peak intensities of XPS sensitively depend on the experimental parameters. For the precise thickness measurement by XPS from the equation , the detailed experimental parameters such as the value, value, and electron emission angle should be accurately determined. In particular, in the case of a large kinetic energy difference between the photoelectrons from the film and the substrate, the surface contamination layer should be well removed, and the effect of the contamination should be adequately considered. 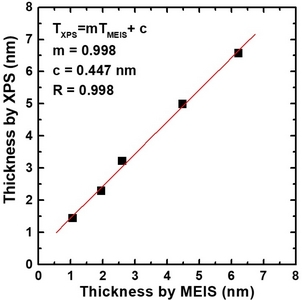 Figure 8. Linear plot of the thicknesses of the TiO2/Si (100) films measured by MEIS and XPS calibrated by TEM thicknesses determined by IP method.

This work was supported by a National Research Council of Science & Technology (NST) grant by the Korean Government (MSIT) (No. CAP-18-04-KRISS).