The rapid advancement of solution-based printing technologies has created cost-effective printing electronics, including printable displays, printable photovoltaics, and printable thin film transistors (TFTs) [1–3]. Various coating methods have been suggested for solution-based printing technologies, due to their simple and atmospheric process, such as inkjet printing, screen printing, spray, gravure printing, and flexography printing. However, these types of printing technologies require a large amount of solution for coating test and result in the increase of the total cost. In this regard, brush-painting technologies have attracted great attention due to its process simplicity and usage of a small amount of ink. The method of brush-painting can compete with other printing techniques in the area of printing electronics because it has the following advantages: simple control of film thickness from ~10 nm to a few hundred nanometers (due to fast solidification of films on a hot-substrate); shear stress-induced ordering of polymer chains or 1-dimensional nanostructures caused by the contact with brush; and processability on various flat and textured substrates [4]. In particular, brush-painting technologies could be easily incorporated into traditional Korean paper (Hanji), both of which combination could successfully realize paper electronics. For these reasons, brush-painting methods have been employed in academic research to test a small amount of functional ink for printable or paintable electronics on flexible substrate or paper [5]. Recently, many research papers have reported the possibility of ultra-low-cost brush-painting technologies in fabrication of organic solar cells, organic TFTs, sensors, transparent conducting electrode (TCE), radio-frequency identification (RFID), wearable devices, and interconnectors, as shown in Fig. 1 [4–14]. To realize paintable electronics, the materials of semiconductors, insulators, and electrode should be directly patterned by a simple process of brush painting. In particular, cost-effective paintable electronic devices could be commonly fabricated by using a normal paintbrush. Figure 1 illustrates several cases of the applications of brush painting, benefited from its ultra-low cost in coating process. Nevertheless, there is no review paper that widely covers the actual advantages and achievements of brush painting technologies. 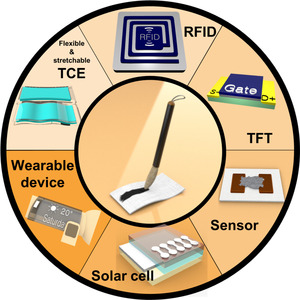 Figure 3(a) shows a schematic of the brush-painting process using a narrow paintbrush normally used for writing and painting. According to its size and shape, various types of paintbrush could be employed in different pattering processes of electrodes. In general, flat and small paintbrushes made of nylon fibrils were used to fabricate paintable and writable devices [4, 5, 12]. In the process of painting, the shear stress of paintbrush led to the lateral alignment of ink and the formation of film on substrate. The movement of the bristles is guided by their moment of inertia, the repulsive force from the substrate, and the external force on the brush applied by a person who holds it. The bristles absorbed functional ink and left a trace on the rigid or flexible substrate, as shown in Fig. 3(a). In our previous work, we introduced this brush-painting method for coating Ag nanowire(NW) and PEDOT:PSS mixed ink [4]. As we explained, the shear stress of the bristles resulted in a uniformly coated conducting PEDOT:PSS layer, which acts as a conducting matrix for the Ag NW network. Therefore, we fabricated fairly thin paintable electrodes on polyurethane (PU) substrates because the bristle of the paintbrush directly contacted the PU substrate, unlike conventional barcoating or slot die coating. The combination of the shear stress of the bristles and the friction force on the PU substrate led to very thin brush-painted Ag NW/PEDOT:PSS electrodes. Recently we also reported the application of brush-painting technology on traditional Korean paper named Hanji, using black conductive ink [5]. As shown in Fig. 3(b), the brush-painted interconnector with black conductive ink was realized on typical Hanji paper using a nylon fibril paintbrush with a width of 1.5 cm. Owing to the low sheet resistance (11.7 Ohm/square) of the brush-painted picture, the serially connected white light emitting diode (LED) was turned on when DC power was applied to the brush painted picture. This demonstrates the feasibility of brush-painting technology for drawing interconnectors on substrate or paper. 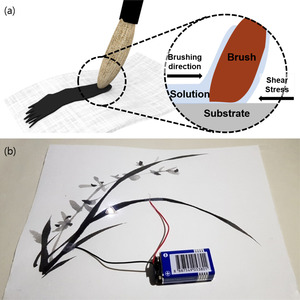 For the purpose of making paintable electronic devices, we must design and synthesize the functional ink apt for brush painting. By mixing water and functional solute like polymer, metal nanowire, and oxide nanoparticles, we could simply synthesize ink for brush painting, as illustrated in Fig. 4. For example, Ag nanowire and PEDOT:PSS mixed ink could be used for brush painting of interconnectors. Ag NWs (length 25 μm, width 30 nm, DI water 0.1 %) and conductive PEDOT:PSS (Clevios HTL Solar) mixed ink (20 mL:1 mL) were mixed for Ag NW/PEDOT:PSS hybrid electrodes on stretchable PU [4]. By combining different types of functional inks, as shown in Fig. 4, we can easily paint electronic devices on flexible substrate or papers.

Figure 4. The variable solution appliable to brush painting. The right ink is representative material. From left, these are poly(3,4-ethilenethiophene) polystyre-nesulfonate, Ag nanowire solution, and ITO nanoparticle. 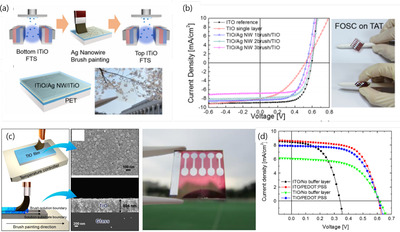 Figure 7 shows other various applications (actuator, RFID, generator, photo detector) using a brush painting process [10, 11, 15, 16]. Figure 7(a) showed brush-painted CNT powder dielectric elastomer actuator (DEA). The CNT ink could be simply pained on stretchable or dielectric elastomer as an electrode of DEA. Since a good stretchability of the CNT electrode, DEA showed a good stretchability and the radial strain of 52 % [16]. In addition, DEA with the square electrode that has oriented by brush painting shows anisotropy properties. Brush painting directly executed on the fiber layer became a powerful means of making wearable electronic devices. Figure 7(b) is textile-integrated RFIDs made by brush painting and these materials were the key components enabling wearable devices. Wang reported that copper and silver ink could be painted by brush on 100 % cotton fabric as antennas for RFID [10]. The optimal copper and silver tag patterned on cotton substrate generated by brush painting showed maximum read ranges of 6 and 10 m. Also, for a successful application of wearable devices, Kazmi applied a protective layer using regular textile glue (Gutermann Creativ HT2), epoxy (ESL 243 White epoxy coating), and silicone rubber (Sugru) brush painting to RFID [17]. They demonstrated that RFID worked well despite of 15 times washing cycle. These results indicate that the brush painting process is suitable for a wearable application. As a simple energy harvesting device, novel X-shaped paper triboelectric nanogenerators (XP-TENGs) was suggested by Xia . as shown in Fig. 7(c) [15]. As a conductive electrode, the ink extracted from ball point pen was painted on paper by brush. The XP-TENGs showed maximum power generation values of 326 V, 45 μA, and 542.22 μW/cm2. In addition, they had proposed a stacked XP-TENGs as shown in right of Fig. 7(c), with the aim of enhancing the power generation values. Finally, the stacked XP-TENGs successfully light up high-power blue LEDs. The type of solution that can be used in painting process usually have advantage of high aspect ratio and broad surface. Therefore, brush painting is an effective method for heterojunction device. As heterojunctions devices, Zhang suggested Te/TiO2 and Te/ZnO UV photodetector using brush painting method as shown in Fig. 7(d) [11]. They simply wrote TiO2or ZnO nanoparticles on commercial paper and then, as the rewriting Te nanowires overlapping with TiO2. As a result, both Te/TiO2 and Te/ZnO UV photoreactors effectively generated photocurrent about 1 nA at 0 V with wave of 350 nm. Table 1 summarized performance of various devices fabricated by brush painting process. Brush painting can be adopted as an effective method throughout electric devices, and if further research is proceeded, it will be an important key to realize fut ciency and eco-friend coating process. 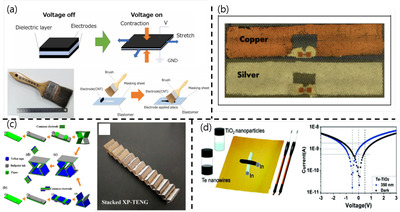 Brush painting with functional ink can provide artists innovative modes of expression and communication due to the three following reasons. First, the Ag nanowire-based ink (BCI) can broaden the lim-ited material options given to traditional East Asian paintings. In gen-eral, the three main materials of traditional East Asian paintings con-sist of paper, brush, and sumi ink. Once the BCI is adopted as a new material of painting, the lines and forms that an artist executes can be easily transformed into highly conductive electrodes. As illustrated in Fig. 8(a), the stem of plum tree, one of the most iconic subject-matters of traditional ink painting, can provide an electronic matrix on which the blue embedded LEDs can be illuminated. The seemingly plain-looking plum tree can be dramatically turned into a specific type of plum tree that has a glowing and dazzling effect due to electronic light. Second, the BCI ink can be mixed with oil-based pigments as well, and accordingly it can be adopted as a new material for Western oil painting. Figure 8(b) is a contemporary abstract painting that the artist draws by means of a normal brush and the mixture of the BCI and oil pigments. This is an all-over painting that simply contains interconnected lines and forms. This modern style painting, however, becomes a contemporary electronic art, once the colorful LEDs, attached onto the connected lines, turn on and create unexpected illuminating effects. By using a simple means of brush and the BCI, the artist can provide viewers a new experience of painting with emitting colorful light. Third, artist can adopt Ag NW and PEDOT:PSS mixed ink as an effective material for contemporary media-installation art. Figure 8(c) shows a mixed-media installation work that consists of two panels of black ink paintings at the center and 3D printed scriptures surrounding them. The two paintings are connected into a speaker at the bottom, and when DC power is applied, those paintings can be functioned as an antenna to transmit the received sound sources into the speaker. As a consequence, viewers can look at visual art works, while listening to the transmitted sounds simultaneously. In other words, a simple mixture of Ag NW and PEDOT:PSS can open up a new possibility of multi-sensory expression, which has been consistently explored in the field of contemporary mixed-media art.

Figure 8. (a) Brush painting of a plum tree on a Hanji substrate, where blue LEDs are embedded in the form of a serial connection. Once DC power was applied to the LEDs attached onto the stem of the plum tree, all of the LEDs were turned on simultaneously. (b) Brush painting of abstract lines on a canvas. The black lines formed by brush painting act as an interconnector for illuminating the LEDs. (c) Brush painted antenna formed by Ag NW and PEDOT:PSS mixed ink.