The Y2O3:Eu films were prepared on sapphire substrates by radio frequency magnetron sputtering. The samples were post-annealed in an air ambient at different temperatures. The Y2O3:Eu films prior to annealing did not show photoluminescence (PL), however, after annealing, the films became capable of emitting photoluminescent light. The PL spectra were composed of several peaks originating from the transitions between 4f energy levels of the Eu3+ ion, from 5D0 to 7FJ where J = 0, 1, 2 ,3, and 4. The PL intensity increased upon annealing at higher temperatures, which was due to the higher degree of crystallinity. The PL intensity decreased above 1200 °C resulting from the formation of yttrium aluminate phases, such as YAM (Y4Al2O9), YAP (YAlO3), and YAG (Y3Al5O12). The unannealed Y2O3:Eu films exhibited a high optical transmittance in the visible to lms decreased as annealing temperature increased due to increase in crystallite sizes.

Y2O3 is a material of high importance in a wide variety of applications. Y2O3 is suitable as a high-temperature protective coating material in a severely reactive environment due to its thermal stability up to 2325 °C and excellent chemical stability coupled with high mechanical strength [1,2]. In addition, Y2O3 exhibits high dielectric permittivity, high breakdown strength, and large band gap energy, which makes it useful as a gate oxide for metal-oxide-semiconductor field effect transistors and as a dielectric for metal-insulatormetal capacitors [3,4]. Furthermore, Y2O3 is a constituent of a high-c supercon-ductor YBa2Cu3O7−x (YBCO) and Y2O3-stabilized ZrO2 (YSZ) thermal barrier coatings [5–7]. YSZ and Y2O3-doped CeO2 are solid-state electrolytes in solid oxide fuel cells and solid-state gas sensors [8–10].

Y2O3 is also a key material in the field of lighting and display technologies. Y2O3 is an excellent host material for doping with rare earth elements, which shows luminescence in various spectral ranges from visible to near-infrared [11–13]. Especially, Y2O3 doped with Eu has attracted great interest due to its highly efficient luminescence. Y2O3:Eu has been widely used as a red-emitting phosphor in fluorescent tubes and display devices [12, 14]. Besides, Y2O3:Eu has been used for biological imaging and temperature sensing applications [11, 15]. Moreover, a recent study has shown that Y2O3:Eu could be used as a red-emitting phosphor to generate white light with GaAlN-based UV-emitting light emitting diodes [16].

Y2O3:Eu is typically synthesized in the forms of micrometer- and nanometer-sized particles [11, 12, 14, 15]. Thin-film form of Y2O3:Eu is also attractive because of its advantages, such as better thermal stability, more uniform thickness, better adhesion to the substrate, and smaller pixel spot size, i.e. higher resolution [17]. Transparency is another benefit of thin-film form of Y2O3:Eu because it provides a smoother surface in comparison to its particle form, thus leading to lower light-scattering loss. Transparent Y2O3:Eu has been suggested for use in transparent displays and transparent optical coatings [18]. Thin films of Y2O3:Eu have been studied previously [19, 20]. However, data concerning the optical transparency of the Y2O3:Eu films are very limited. Therefore, in this work, we aimed to study on the Y2O3:Eu films with optical transparency. We focused on the relationship between optical transparency, structure, and photoluminescence of the Y2O3:Eu films. Sapphire was chosen as a substrate material because of its high optical transparency as well as high thermal stability and durability.

The thin films of Y2O3:Eu were prepared on sapphire (0001) sub-strates by radio frequency (RF) magnetron sputtering of an Eu-doped Y2O3 target in argon gas. The Eu concentration of the target was about 1at.%. The sapphire substrates were loaded into the sputtering chamber that was subsequently pumped down to a pressure below 1 × 10−6 Torr. The high-purity argon gas was introduced into the chamber and the gas pressure was maintained at 2 × 10−2 Torr. During deposition, the sapphire substrates were not intentionally heated and the RF power density was kept at 5.92 W⋅cm−2. The thickness of the films was about 500 nm. After deposition, the samples were post-annealed in an air ambient at temperatures from 800 to 1300 °C for 1 h.

The crystallographic phases of the films were investigated by X-ray diffraction (XRD) using a SmartLab Rigaku diffractometer with Cu α radiation. For photoluminescence (PL) studies, the PL spectra were measured using a Perkin Elmer LS 55 spectrometer. The PL emission spectra were detected for excitation at 207 nm and the excitation spectra were recorded for the luminescence at 612 nm. The PL spectra were measured at room temperature using a xenon discharge lamp with 20 kW power. The transmittance spectra of the samples were recorded by using a Perkin Elmer Lambda 35 spectrophotometer in the range from 190 to 1100 nm.

Y2O3 has a cubic bixbyite crystal structure with a space group of Ia3-() [21]. The bixbyite Y2O3 structure is a modified fluorite-type cubic structure, where one quarter of the total oxygen ions are taken out in order to maintain charge neutrality. As depicted in Fig. 1, the unit cell contains sixteen Y2O3 formula units [21]. There are eighty ions with thirty-two yttrium and forty-eight oxygen ions in the unit cell. Oxygen ion is four-fold coordinated (CN = 4) and occupies the center of the cation tetrahedron. Yttrium ion occupies the center of the oxygen cube and is six-fold coordinated (CN = 6) by six neighboring oxygen ions with one quarter of oxygen sites vacant and regularly arranged. This structure results in two symmetry-inequivalent crystal-lographic yttrium sites, i.e., S6 and C2 sites. Orange and blue spheres in Fig. 1 represent yttrium ions at S6 and C2 sites, respectively. As can be seen in Fig. 1(a), the S6 site has a center of inversion resulting from two oxygen vacancies lying on the body diagonal of the cubic cell. But, the C2 site has non centrosymmetry due to the two oxygen vacancies along face diagonal. 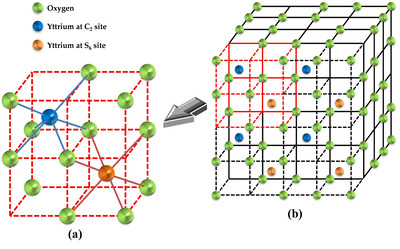 Figure 1. Schematic diagrams of (a) the Y2O3 formula unit and (b) the unit cell of cubic bixbyite Y2O3 structure. Oxygen ions are denoted by green sphere e and orange spheres represent Y ions at the C2 and S6 sites, respectively.

Figure 2 shows the PL emission spectra of the Y2O3:Eu films. No PL emission was observed from the unannealed films. After annealing, the films were capable of emitting PL light. The PL spectra are composed of several peaks which originate from the transitions of the Eu3+ ion. As labeled in Fig. 2, all the emission peaks are attributed to the transition from 5 0 to 7 J where = 0, 1, 2, 3, and 4. The most intense peak is observed near 612 nm corresponding to the transition from 5 0 to 7 2 level. The relatively small peak at 632 nm is also from the transition from 5 0 to 7 2 level. The 5 0 → 7 2 transition is a symmetry-sensitive and parity-forbidden electric-dipole transition which strongly depends on the local symmetry environment of the Eu3+ ions [22]. In cubic-structured Y2O3 crystallites, as illustrated in Fig. 1, Y3+ ions resides at two different sites, C2 and S6. The C2 site has non centrosymmetry, but the S6 site has perfect inversion symmetry. It can therefore be found that the parity-forbidden 5 0 → 7 2 transition is allowed due to the Eu3+ ion occupying at the C2 site which lacks inversion symmetry. This results in the prominent PL emission peak at 612 nm. 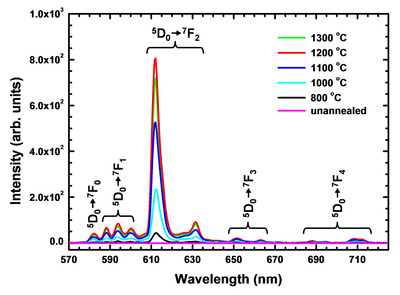 Figure 3 shows the change in the PL emission intensity at 612 nm as a function of annealing temperature. The PL intensity increases with increasing annealing temperature. As discussed below with XRD data, the crystallinity of the Y2O3:Eu films is improved and the crystallite size increases with increasing annealing temperature. This suggests that the higher PL intensity of the Y2O3:Eu films annealed at higher temperature can be accounted for by increase in the degree of crystallinity of the films. At temperatures above 1200 °C, the PL intensity decreases, which results from the formation of yttrium aluminate phases by the reaction of the film with the sapphire substrate, as confirmed by XRD results below. Figure 4 shows the PL excitation spectra of the Y2O3:Eu films. The intense band centered near 208 nm is related to the absorption of the Y2O3 host. The additional bands at wavelengths between 225 and 280 nm are due to the charge transfer from O2− to Eu3+ ion [17]. 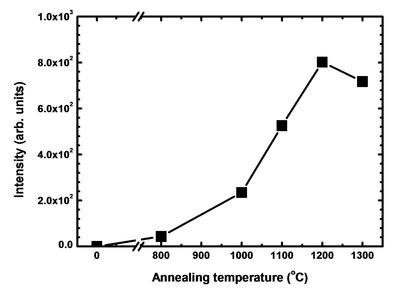 Figure 3. Variation of the PL peak intensity with annealing temperature. 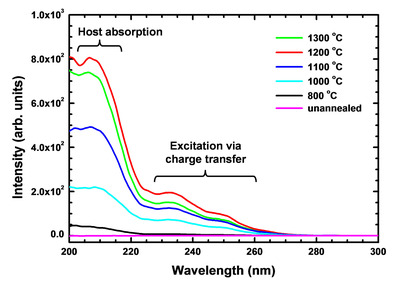 Figure 5 presents the optical pictures of Y2O3:Eu films prepared on a sapphire substrate under room light and ultraviolet (UV) light excitation at a wavelength of 254 nm. These pictures were taken after annealing the sample at 1000 °C for 1 hour in an air ambient. As shown in Fig. 5(a), the transparency of the Y2O3:Eu films is sufficient to allow the easy reading of the underlying letters. Under UV excitation, as seen in Fig. 5(b), the Y2O3:Eu films emit strong PL light. 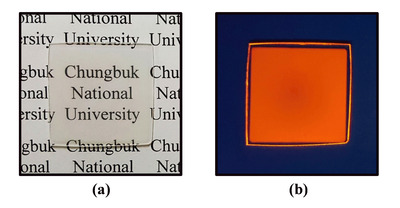 Figure 5. Optical pictures of the Y2O3:Eu film deposited on a sapphire substrate taken under (a) room light and (b) ultraviolet light. 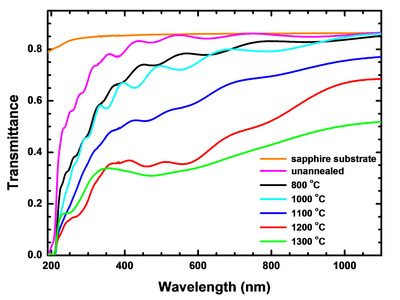 The XRD patterns of the Y2O3:Eu films are shown in Fig. 7. The unannealed films exhibited a low degree of crystallinity as evidenced by broad and weak diffraction peaks in Fig. 7(b). The diffraction peaks associated with cubic and monoclinic crystal structures of Y2O3 were detected from the unannealed films. The peaks denoted by Miller indices are identified as the cubic phase according to the Joint Committee on Powder Diffraction Standards (JCPDS) No. 43-1036. The peaks from the monoclinic Y2O3 phase are marked with the symbol (◆) according to the JCPDS No. 47-1274. This XRD pattern indicates the presence of a cubic Y2O3 phase mixed with a monoclinic phase in the unannealed films. After annealing at 800 °C, only the cubic Y2O3 phase is present. As the annealing temperature increased, the intensities of the XRD peaks were increased and the widths of the peaks became narrower. This indicates that the sizes of the crystallites in the films were increased with increasing the annealing temperature. The diffraction peaks of secondary phases were detected after annealing at 1200 °C and became more prevalent at 1300 °C. The peaks at about 18.9°, 29.6°, 30.6°, and 43.8○ correspond to YAM (monoclinic yttrium aluminate, Y4Al2O9) phase (JCPDS No. 34-0368). The peaks at 24.1°, 26.9°, 34.3°, 34.6°, 42.6°, and 49.0° arise from YAP (yttrium aluminate perovskite, YAlO3) phase (JCPDS No. 33-0041). The peaks at 18.1°, 36.6°, 72.1°, and 73.0° correspond to YAG (yttrium aluminate garnet, Y3Al5O12) phase (JCPDS No. 33-0040). These yttrium aluminate phases were possibly formed through the reaction between the film and the sapphire substrate as described below [23]. 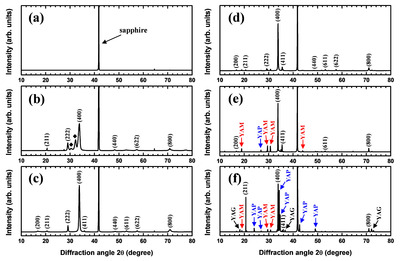 Optically transparent thin films of Y2O3:Eu were prepared and the relationship between their optical transparency, structure, and photo-luminescence was investigated. No luminescence was observed from the unannealed Y2O3:Eu films. After annealing, the films exhibited strong PL emission. The PL spectra were composed of several peaks which originated from the transitions in Eu3+ ion, from 50 to 7J ( = 0, 1, 2 ,3, and 4). The intensity of PL emission was increased with increasing annealing temperature, which was due to the higher degree of crystallinity of the Y2O3:Eu films. The PL intensity reduced above 1200 °C because yttrium aluminate phases, such as YAM, YAP, and YAG, were formed. The unannealed Y2O3:Eu films were highly optically transparent. The transmittance decreased as annealing temperature increased due to increase in crystallite sizes.

This research was supported by the National Research Foundation of Korea (NRF) grant funded by the Korea government (MSIT) (No. 2019R1F1A1040480).