Electron interference observed by varying magnetic field in a quantum ring is the manifestation of Aharonov-Bohm (AB) effect [1]. The interference is the results of the phase difference between two electron beams (see Fig. 1(a), rotating clockwise and counter-clockwise directions) which is proportional to the enclosed magnetic flux inside a quantum ring. According to Aharonov and Bohm, it is not necessary for electron to experience the magnetic field directly. They explicitly mentioned that “contrary to the conclusions of classical mechanics, there exist effects of potentials on charged particles, even in the region where all the fields (and therefore the forces on the particles) vanish” [1]. In other words, the charged particle is affected by the vector potential even though the particle is confined in the region where the magnetic field is zero, which is totally surprising and the result of quantum mechanics. Many efforts have been followed to realize the experiment that Aharonov and Bohm proposed (in other words to isolate the electron path from the external magnetic field). By using toroidal ferromagnet covered with superconductor layer, Tonomura . observed electron holography produced by electron beams passing the toroid [2]. This experiment is recognized as the evidence and the first experimental realization of Aharonov and Bohm effect. Despite the successful demonstration of AB effect, there were some skepticism and attempts to explain the effect under the framework of classical physics [3–5], including interaction between electron and magnetic fields. 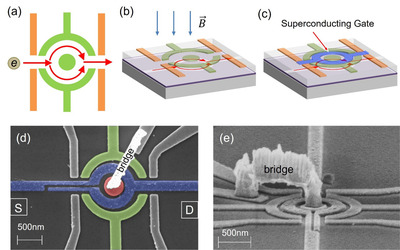 Figures 1(a)–(c) are showing the concept of the device. A quantum ring is formed by applying negative voltages on the gates painted in green. The negative voltages on the green gates will stop electrons flow under the gate. Thus, the electron will flow only along the trajectories denoted as red arrows in Figs. 1(a) and 1(b) [6–8]. To switch on and off the magnetic field on the electron path, while allowing magnetic flux pass through the area enclosed by the electron path, a superconducting gate (the gate colored in blue) is placed to cover only the electron path, as shown in Figs. 1(c) and 1(d). Note that the ring of the superconducting shield gate is not forming a closed circle in Fig. 1(d). This is to avoid the flux quantization inside the superconducting ring, which hinders the continuous change of magnetic field in the ring. A precise alignment is necessary to avoid short circuits between ordinary gates forming quantum ring and superconducting shield gate. A small misalignment (less than 50 nm) is observed in Fig. 1(d) but without any visible short between gates. The red circular gate in Fig. 1(d) is connected via so called a “bridge gate” (see Fig. 1(e) for a 3-dimensional view) because a direct connection to the outer region is blocked by the superconducting ring gate. Finally, four gray gates on either side of the ring tunes the coupling between the reservoir and the ring.

The quantum ring is fabricated on a 2-dimensional electron gas (2DEG) wafer based on a GaAs/AlGaAs heterostructure with electron density of 3×1011 cm−2 and mobility of 2.1×106 cm2V−1s−1 at 4.2 K. The 2DEG is buried 62 nm below the surface of the wafer. Prior to the gate fabrication, mesa etching and ohmic contact evaporation/annealing are done [9,10]. Three gate evaporations are done to complete the device fabrication. First, the quantum ring and coupling gates (green, red and gray gates in Fig. 1(d)) are defined by using electron beam lithography and 25/25 nm-thick Ti/Au layers are evaporated. Second, a shield gate is fabricated with 50 nm thick Al layer (which is super-conducting up to around 1 K in temperature) by using same method mentioned above. Finally, a bridge gate is fabricated by electron beam lithography on a PMMA/MAA 8.5 MAA bilayer resistor [11]. All the measurements are done at 50 mK in a dilution refrigerator. The conductance through the device is measured by applying an excitation voltage of 10 μV from the source and measuring the current on the drain. The measurements were done as a function of external magnetic fields and the ring gate (green gates in Fig. 1(a)) voltages.

Figure 2(a) shows typical magnetoconductance data measured for a fixed ring gate voltage. Fast oscillation of conductance as a function of magnetic field, in addition to a relatively slowly varying conductance background, is observed. The oscillation period matches with a flux quanta h/e, which is the fingerprint of AB oscillations [6–8]. A smooth background (red trace) is subtracted from the raw data to extract conductance changes related to the AB oscillations only, which is shown in Fig. 2(b). A smooth background is obtained by fitting the data with a polynomial function which uses sinusoidal functions as bases. The result shows the AB oscillation having a periodicity of around 83 gauss (corresponds to the one flux quanta of the ring). Also, an extra oscillation with a shorter periodicity is evident. Fast Fourier transformation result in Fig. 2(c) shows the oscillations with integer multiples of the fundamental AB frequency. Such high frequency oscillations exist due to the electrons rotating multiple times in the ring [6,8]. Regardless of their frequencies, the oscillations are still the direct consequence of AB effect. Note that the observed AB oscillation shows mirror symmetry around zero magnetic field. In other words, , where is the conductance of the device and B is the external magnetic field. This is due to the Onsager relation based on time-reversal symmetry of two-terminal closedring device, which was reported by Yacoby . [7]. 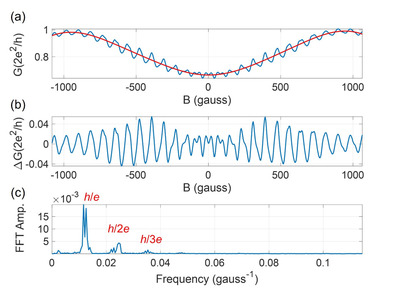 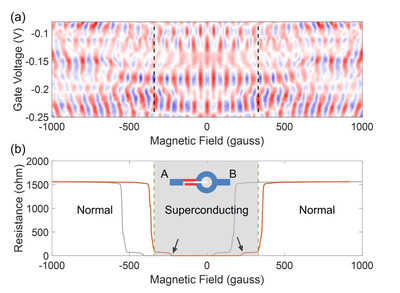 Figure 3. (a) The AB oscillation (after subtracting smooth background) observed by varying external magnetic fields and gate voltages on the ring. (b) The resis-tance of a superconducting gate (measured between A and B) as a function of external magnetic fields. Inset shows the shape of the superconducting shield gate. The red (gray) trace is measured while ramping up (down) the magnetic fields. There was a noticeable hysteresis due to the remanent magnetization of the magnet and its surroundings. Hence, (a) is measured while ramping up the field.

Another way of suppressing the superconductivity on the gate is to apply a current higher than the critical current of the gate. The measured critical current (measured by applying current thought the gate and monitoring the resistance of the gate) of our shield gate was around 0.8 μA, which is about an order of magnitude smaller than the reported value with a similar structure [14]. We believe that the discrepancy is due to the differences in quality and geometry (thickness and width) of the Aluminum gates. Due to the discrepancy, we applied a current of 2.9 μA, which is well above the measured critical current, to suppress the superconductivity on the gate. Figures 4(a) and 4(b) are the AB interferences measured without and with the current on the gate, respectively. Again, AB interferences are observed regardless of shielding. Even though, the two figures are not identical, overall features such as visibility and the interference patterns are pretty much the same for both cases (superconducting vs normal). The visibilities, which is defined as (Gmax-Gmin)/(Gmax+Gmin), of the interference were around 0.03 - 0.05 for both cases. Also, the 2-dimensional inter-ference patterns look similar even though the visibilities, at specific gate voltages, are slightly different. The discrepancy in the visibility is due to the slow changes in the gate characteristics (the conductance as a function gate voltage), which is quite common for GaAs/AlGaAs heterostructure based devices. Since it takes about 12 hours for each measurement, a slight change in the gate characteristic is expected, which results in somewhat different graphs shown in Fig. 4. Considering that the interferences are observable for both cases (current on and off), despite of small differences, we believe the results also support that AB interference does not require direct interaction between electron and magnetic fields.

A quantum ring which can turn on and off the external magnetic field on the electron path of the ring is developed. The switching is realized by employing a superconducting shield gate and controlling the superconductivity on the gate with applied current or magnetic field. The device enables us to test if the direct interaction between electron and the magnetic field is necessary to observe AB interference. Our results show that the AB interference is hardly affected by the existence of direct interaction between the electron and the magnetic field. The result reconfirms the fact that “the effects of potentials on charged particles exists even in the region where all the field vanish” which was discovered by Aharonov and Bohm.

We would like to thank Nam Kim for his help and discussion. This work was supported by a 2-year Research Grant of Pusan National University.