The requirement for ecofriendly electric and electronic materials, particularly multilayer ceramic capacitors, is increasing in the fields of information technology and artificial intelligence. Ecofriendly BaTiO3 is suitable for meeting this requirement, and it has the potential to be actively used in these fields. As shown in Fig. 1, BaTiO3 consists of Ti4+ at octahedral coordination sites and Ba2+ at 12-coordinated sites in a high-temperature Pm3m cubic symmetry. Spontaneous polarization occurs owing to noncentrosymmetric displacement in the ferroelectric state below 120 °C. As BaTiO3 is a relatively simple compound, it is easy to synthesize it using appropriate impurities or additives such as La3+, Sb3+, Nb5+, Ta5+, Co2+, and Ni2+. Thus, it is possible to fabricate an efficient dielectric with a high electric field strength and frequency-dependent properties. In this respect, BaTiO3 is an excellent electronic material with various advantages over other materials [1–5]. 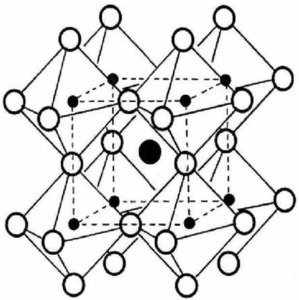 Figure 1. Perovskite BaTiO3 with the Ba2+ at the center of the cell and Ti4+ inside the oxygen octahedra.

The Ba0.9Bi0.1TiO3 solid solution was prepared by synthesizing BaO, TiO2, and Bi2O3 with a purity of 99.9 % or higher. The mole fractions of BaO, TiO2, and Bi2O3 were 13.7997, 7.9900, and 2.3298, respectively. Calcination was carried out in 10 intervals at 1150–1200 °C. The powder synthesized at 1180 °C was stably calcined, and it had the highest perovskite content. Sintering was performed using this powder. The specimen used for characterization was a disk-shaped Ba0.9Bi0.1TiO3 solid solution, which was synthesized by sintering at 1310 °C for 5 h. The ionic radius of Bi3+ (153 pm) is half of that of Ba2+ (255 pm); hence, a charge imbalance of cations may occur. The formation and atomic ratio of the perovskite structure of the Ba0.9Bi0.1TiO3 solid solution were observed using X-ray diffraction (XRD), energy-dispersive X-ray spectroscopy (EDS), and field emission scanning electron microscopy (FESEM), which are general-purpose analytical methods. The capacitance and dielectric loss of the Ba0.9Bi0.1TiO3 solid solution were obtained using an LCR meter. They were measured as a function of temperature at frequencies of 102–105 Hz and a heating rate of 4 °C/min.

Crystallographically pure BaTiO3 crystals have two phases: tetragonal and cubic. Figure 2 shows the XRD results of BaTiO3 and Ba0.9Bi0.1TiO3. The (222) pyrochlore phase was not observed. However, (110) perovskite, which is an evidence of the perovskite structure, was clearly observed. Therefore, the specimens calcined at 1180 °C and sintered at 1310 °C for 5 h formed a stable perovskite structure at the current level and satisfied the appropriate heat treatment conditions. However, in the specimen substituted with Bi2O3, the XRD intensity corresponding to pyrochlore Bi2Ti2O7 was observed at approximately 27.1°. Phases at approximately 35° and 49° could not be clearly identified. However, these phases were observed in previous studies. In particular, when more than 0.15 mole % Bi3+ was substituted in BaTiO3, pyrochlore Bi2Ti2O7 was more clearly observed in XRD data. Therefore, a stable perovskite structure can be obtained if the substitution amount of Bi3+ is adjusted to approximately 0.1 mole%. It was speculated that it was sintered to a high density at 1310 °C and Ba0.9Bi0.1TiO3 had a stable (A1A2)BO3 complex perovskite structure. Consequently, the dielectric properties over a wide temperature range can be improved. 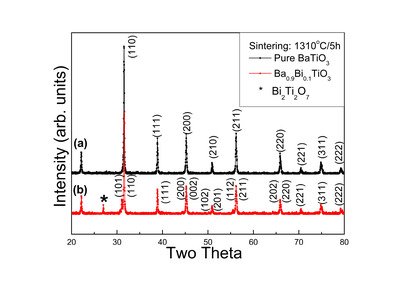 The substitution of the A and B sites of pure BaTiO3 with other ions strongly affects its physical properties, such as dielectric, piezo-electric, and pyroelectric properties. Figure 3 shows the EDS results of pure BaTiO3 and Ba0.9Bi0.1TiO3. The EDS spectrum of pure BaTiO3 was typical. The atomic percentages of Ba2+, Ti4+, and O2− were 18.95 (58.14 wt %), 18.09 (19.36 wt %), and 62.96 % (22.50 wt %), respectively. However, the EDS spectrum of Ba0.9Bi0.1TiO3 clearly showed that the substitution of Bi3+ was related to inhomogeneous particles. In this case, the atomic percentages of Ba2+, Ti4+, and O2− were 38.25 (69.71 wt %), 25.35 (17.21 wt %), and 33.12 % (7.270 wt %), respectively, and approximately 3.280 % (5.810 wt %) Bi3+ was observed. This was due to the nonuniform distribution of Bi3+ and the separation of the sample, resulting in a partial nonferroelectric region in the BaTiO3 specimen. However, there was no significant change in dielectric properties. There was a relatively large difference between the atomic compositions of pure BaTiO3 and Ba0.9Bi0.1TiO3. It has been reported that the addition or substitution of impurities strongly affects the crystallization kinetics of a solid solution. This effect can be interpreted as follows: Generally, the diffusion dynamics of the elements that constitute each oxide during the heat treatment process are significantly affected by the presence of charge compensation defects. As the atomic radius of Bi3+ (153 pm) is 60 % of that of Ba2+ (255 pm), charge imbalance was observed during the experiment in this study owing to the difference in the oxidation state. In terms of the ionic radii of two ions at an A site, Ba2+ can be substituted by Bi3+ in the perovskite lattice. Furthermore, low-valence ions are substituted by high-valence ions. Thus, Ba0.9Bi0.1TiO3 is synthesized as a defect in the charge and structure. The substitution of Ba2+ with Bi3+ causes a charge compensation reaction and changes the pore concentration of the crystal because of the difference in the atomic radii and valences. As stated earlier, approximately 3.280 % (5.810 wt %) Bi3+ was detected in Ba0.9Bi0.1TiO3. At this atomic percentage, the effect of Bi3+ on microstructural uniformity is not a major problem. Figures 4(a)-(c) show the surface micrographs of BaTiO3, Ba0.9Bi0.1TiO3, and Ba0.9Sb0.1TiO3, respectively. In polycrystals, the number of pores and impurities decreases because of heat treatment at high temperatures, and crystal grains generally grow. As shown in Fig. 4(c), the particle size of the sintered Ba0.9Sb0.1TiO3 solid solution was approximately 2.0 μm, indicating a relatively dense particle arrangement. However, as shown in Fig. 4(b), sintered Ba0.9Bi0.1TiO3 consisted of dense and relatively small grains. This implied that the particle size was slightly smaller than that of BaTiO3 systems with a donor dopant [6, 7]. In complex structured perovskites, the energy required to stably bind displaced ions of different ionic radii and valences at each lattice site is associated with the formation of compensatory defects. On the basis of the XRD results shown in Fig. 2, it was judged that Ba0.9Bi0.1TiO3 sintered at 1310 °C had relatively normal grain growth and a uniform microstructure. The presence of chemically heterogeneous systems in Ba0.9Bi0.1TiO3 specimens was different from that in Nb5+-substituted and Ta3+-substituted BaTiO3 systems but quite similar to that in recently reported Sb3+-substituted Ba1−xSbxTiO3 systems [3]. 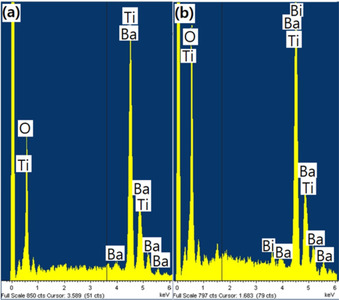 The dielectric constant and dielectric loss of BaTiO3, Ba0.9Bi0.1TiO3, and Ba0.9Bi0.1TiO3 were measured at frequencies of 102–105 Hz to analyze the frequency dependence of these properties. The results are shown in Fig. 5. As the frequency increased, the dielectric constant decreased and the dielectric loss increased. At frequencies higher than 103 Hz, the dielectric constant of Ba0.9Bi0.1TiO3, which required more energy for the rotation of dipoles in polycrysta decreased more rapidly than that of BaTiO3 and Ba0.9Sb0.1TiO3. This was accompanied by a rapid increase in the dielectric loss. These dielectric properties of Ba0.9Bi0.1TiO3 were considered to be caused by the Bi2Ti2O7 pyrochlore phase generated in polycrystals by the substitution of Ba2+ with Bi3+. The absolute value of the dielectric constant decreased in the case of Bi3+ substitution compared to Sb3+; however, the frequency stability improved. This phenomenon in the BaTiO3 system has been reported by several other researchers [8–10]. In general, when trivalent ions, such as Bi3+, La3+, and Sb3+, are substituted in BaTiO3 systems, they occupy Ba2+ sites because of similar ionic radii and electronegativities. Therefore, Bi3+ located at the A site of perovskite BaTiO3, which is Ba2+ site, attempts to maintain charge balance. Hence, electron and/or barium vacancies occur, for example, BiBa→Bi*Ba + ′ and BiBa→Bi*Ba+(1/2)V′′Ba. In this process, Bi*Ba is the ionized Bi2+ donor, V′′Ba is the double ionized barium vacancy, and e′ is the electron. In the case of substitution with a low Bi2+ concentration, as in this study, compensation occurs via BiBa→Bi*Ba+e′. At high Bi3+ concentrations, compensation occurs via BiBa→Bi*Ba+(1/2)V′′Ba, similar to other trivalents. This may imply that there are numerous crystal defects in the crystal structure of Ba0.9Bi0.1TiO3 and shows that Bi3+ partially substitutes Ba2+ at the A site of ABO3. Therefore, when Bi3+ substitution occurs in pure BaTiO3 under suitable conditions, the local disorder around Ba2+ atoms is reduced. Moreover, the local structure of Ti4+ is affected to a certain extent [11, 12]. 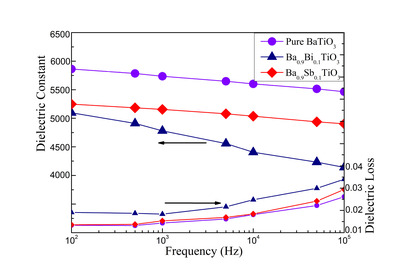 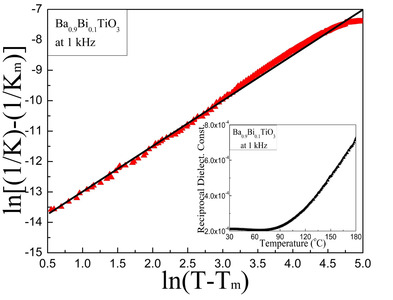