Distinctive spectroscopic characteristics are observed in colloidal perovskite CsPbBr3 quantum dot (QD) dispersed in octane doped with PPO. As the content of CsPbBr3-QD increases, the emission and the absorption energies decrease due to QD-cluster formed in case of the inter-QD distance smaller than diameter of QD. Spectroscopic evidences supporting QD-cluster are found in the Urbach energy and the carrier lifetime. Unusual absorption lines showing explicit QD dependence are observed in Fourier-transform infrared spectra, which is explained by vibrational modes of bound PPO hybridized with CsPbBr3-QD.

By virtue of distinguished characteristics in light emission and absorption, the perovskite (Px) structure has abruptly emerged as a new semiconductor system [1]. The application has been widely spreading over all fields of optoelectronic devices, such as solar cells [2, 3], light-emitting devices [4], photodetectors [5], X/γ-ray detectors [6, 7], and THz emitters [8]. In these, the solar cell has rapidly developed in 10 years since Miyasaka [9] first reported the efficiency of 3 % in 2009. By introduction of organic-inorganic hybrid Px (FAPbI3/MAPbBr3) and of pseudohalide anion formate (HCOO−), the efficiency jumps up to 24.23 (2019) [2] and 25.6 % (2021) [3], respectively, whose values are superior to that of Si-based solar cell. In particular, all-inorganic CsPbX3 (X=Cl, Br, I) is drawing attention as new Px candidate that could replace the hybrid Px with drawback like phase decomposition. Nano-crystalline CsPbX3 exhibits quantum-dot (QD) behavior [10, 11] that shows extremely high photoluminescence quantum yield (PLQY) and photoelectric conversion efficiency (PCE). In addition, it has been known that the wavelength modulation is available in the whole range of visible light (~430−780 nm) by simply substituting halogen element (X). Therefore, a variety of Px-based materials and their photoelectric applications are now under study [10–13].

Figure 1 illustrates some experimental results obtained in previous study [14]. The specimens used were CsPbX3-QDs dispersed in solvent (octane, C8H18) with a small amount of fluorescent substance of PPO (2,5-diphenyloxazole, C15H11NO), which was successfully applied to high-sensitivity liquid X-ray scintillator. Figure 1(a) is optical photographs for representative 5 samples synthesized in our laboratory, Figs. 1(b)/1(c) the light emission of each sample under irradiation of UV (365 nm)/X-ray (6 MV), and Figs. 1(d)/1(e) representative photoluminescence/radioluminescence (PL/RL) spectra. Figure 1(f) is a demonstrative X-ray image taken by the CsPbBr3-QD scintillator. Figures 1(d)/1(e) reveal that each CsPbX3-QD sample of different component/composition (X) has a unique spectrum, and added PPO does not perturb spectral characteristics of QD in the visible light region at all. The details on the labfabricated PPO-assisted CsPbBr3-QD scintillator are described in previous report [14]. 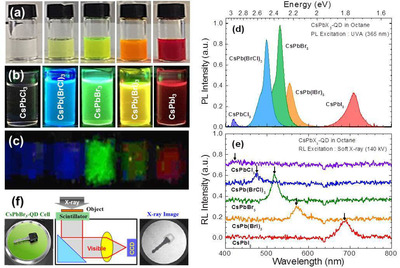 In this study, we report some unusual spectroscopic behaviors observed in colloidal CsPbBr3-QD doped with PPO. The formation of QD-cluster is proposed on the basis of PL and absorption (AB) spectra showing QD dependence. The Urbach energy manipulated from AB spectra and the carrier lifetime identified by time-resolved photolumi-nescence (TRPL) spectra are discussed as additional data supporting QD-cluster. In Fourier-transform infrared (FTIR) spectroscopy, the QD-PPO hybridization is proposed for explanation of distinctive behavior on AB lines growing with the QD content.

CsPbBr3-QD samples used in this study were prepared by the hot-injection synthesis that was introduced by Schmidt . [15] and Protesescu . [4] for metal-calcogenide QD and metal-hallide Px-QD, respectively. First, for Cs-precursor, cesium-carbonate (Cs2CO3) and oleic-acid (OA) were mixed with octadecene (ODE) and reacted by heating in nitrogen atmosphere. PbBr2 precursor was prepared by mixing PbBr2/ODE with ligands of OA+OLA(oleylamine). When PbBr2 was dissolved, the temperature was raised up to 180 °C and Cs-precursor was injected. The mixture was quenched in a cooling reservoir and separated CsPbBr3-QD powder through centrifugation.

Several tens of milligrams of QD powder were synthesized in a single batch, and a series of CsPbBr3-QD samples for each spectroscopy were prepared by dispersing QD powder in octane just before measurement. It was confirmed that CsPbBr3-QD samples used in this study exhibited excellent PLQY and unique PL spectra, as demonstrated in Fig. 1.

Figure 2 presents (a) PL spectra and (b) a pair of curves for the intensity and the energy of PL peaks of CsPbBr3-QDs plotted as a function of QD content. As the QD content increases from 1→10 mg/ml, the intensity monotonically increases, but the energy abruptly decreases from 2.458 to 2.420 eV. It can be easily understood for increase of PL intensity in terms of the number of QDs, but a plausible explanation is required for the anomaly of PL energy. 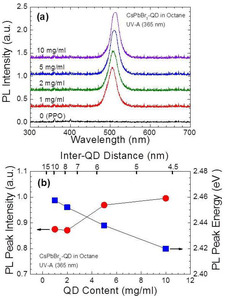 Figure 2. (a) PL spectra and (b) PL peak intensity and energy plotted as a function of QD content.

We have introduced the inter-QD distance as a parameter alternative to the QD content, as denoted on the upper axis of Fig. 2. When the distance between QDs becomes smaller than diameter of QDs, a bulk of QDs adhere and entangle each other to form QD-cluster. The sublevel energy of QD-cluster suffers the red shift that is lower than that of individual QD due to the quantum confinement effect [16]. The QD content increases more, the size of QD-cluster becomes bigger, and the red shift becomes larger.


where NA is the Avogadro number (6.02 × 1023 mol−1), and M and d the molecular weight of CsPbBr3 and the QD content, respectively. As the QD content () changes from 1→10 mg/ml, the inter-QD distance () approaches from 9.8 to 4.6 nm whose values are comparable to or smaller than QD diameter of 8−12 nm. These figures confirm that the inter-QD distance is sufficiently close to form QD-clusters

Experimental results supporting the QD-cluster formation can be seen in the AB spectra. Figure 3 shows (a) AB spectra and (b) a pair of plots for the optical bandgap [] and the Urbach energy [] of CsPbBr3-QD. 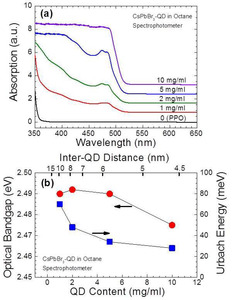 Figure 3. (a) AB spectra and (b) optical bandgap and Urbach energy plotted as a function of QD content.


where α is AB coefficient, =2 for the direct allowed transition, and a proportional constant. As the QD content increases from 1→10 mg/ml, g(O) decreases from 2.490 to 2.475 eV whose values are higher than the PL peak energy by 32−55 meV equivalent to 6−12 nm in wavelength. The difference is well known to the Stokes shift that is frequently observed in normal spectroscopy, and decreasing g(O) may be the other evidence for the QD-cluster formation.


where α0 is the value at =0. is a parameter corresponding to the linewidth energy of band-tail formed by defects. As shown in Fig. 3, monotonically decreases with increasing QD content, which indicates surface defects reduced by the QD-cluster formation. In other words, the surface-to-volume ratio (SVR) of QD-cluster formed by a bulk of QDs is smaller than those of individual QDs. Therefore, the surface trap due to dangling bonds becomes decreased, which leads to reduction of .

We suggest the carrier lifetime as an additional result for QD-cluster. Figure 4 presents (a) TRPL spectra and (b) a couple of plots for the fast/slow decay time taken at PL peaks for CsPbBr3-QDs, which was analyzed by double-exponential decay function. As the QD content increases, the fast decay exhibits a minor increase in the range of 10−20 ns, but the slow decay experiences a rapid decrease from 150 to 50 ns. 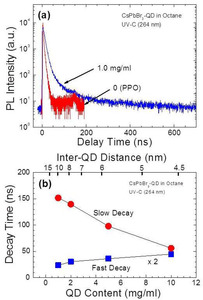 Figure 4. (a) TRPL spectra and (b) carrier lifetimes for fast and slow decays plotted as a function of QD content.

The fast decay reflects an average lifetime for carriers captured at surface traps such as dangling bonds. As the size of QD-cluster grows larger, the number of surface defects reduces and the average lifetime becomes longer. On the other hand, the slow decay time includes an information on the recombination rate (R) of free electron/hole () in conduction/valence sublevel. As previously discussed in PL/AB spectra, the red shift of the QD sublevel due to the cluster formation results in enhancement of the recombination rate (), which makes the carrier lifetime short.

An interesting behavior was observed in infrared spectroscopy. Figure 5 shows FTIR spectra of colloidal CsPbBr3–QDs that are basically the same as samples used in this study. It is noted that the QD spectrum displays the net intensity eliminated by the solvent background (topmost) from the raw QD signal via a graphic software. Six AB lines were found in FTIR spectra, and they could be categorized into 2 groups. One is Group-A for 2 outermost AB lines (1465, 719 cm−1) with invariable intensity over all QD spectra, and the other is Group-B that consists of 4 inner AB lines (1378, 1240, 1056, 887 cm−1) showing explicit QD dependence. 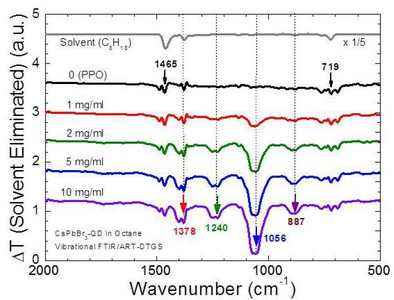 Table I is a summary on 6 AB lines observed in FTIR spectra. The bonding modes suggested were retrieved from the Reference Data Book [17]. Considering that PPO spectrum is composed of only 2 Group-A lines invariable for all QD spectra, it is clear that the 2 AB lines (1465/719 cm−1) are attributed to C-H/C=C bending of individual PPO molecules (C15H11NO).

Taking consideration of spectral evolution of Group-B growing with the QD content, Group-B should be strongly correlated with QDs, absolutely opposite to Group-A. Here is an ambiguity in Group-B. Despite that Group-B exhibits explicit dependence on CsPbBr3–QD, no vibrational mode related with Cs-Pb-Br bonds exists in the whole FTIR spectral range of 4000−400 cm−1. The contradiction of Group-B can be explained by hybridization of QD (CsPbBr3) and PPO (C15H11NO). The hybridized system was already proved both theoretically and experimentally in previous study [14], and the schematic model of PPO hybridized with QD is sketched in Fig. 6. In this configuration, negatively charged N of PPO and positively charged Pb of QD form ionic bond, so PPO molecule is tightly bound to CsPbBr3–QD via Pb-N bond. Here, we can suggest exceptional vibrational modes attributed to oxazole radical (C3HNO=) in PPO bound to heavy QD-molecule/QD-cluster. Four kinds of vibrational modes of C-H, C-N, C-O, and C=C are available in C3HNO=, and each mode can be correof C-O stretching mode stronger than those of the other modes (C-H, C-N, C=C) may be due to difference in strength of dipole moment. 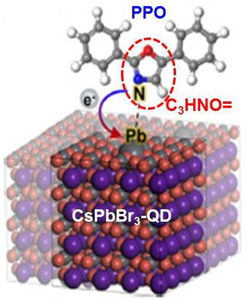 We discussed some unusual spectroscopic characteristics of colloidal CsPbBr3-QDs observed in PL, AB, TRPL, and FTIR spectra. The anomaly of PL and AB energies decreased with increase of QD content was explained by QD-cluster formed by a bulk of QDs. The Urbach energy [] of AB spectra and the carrier lifetime of TRPL spectra were suggested as additional data supporting the QD-cluster formation.

The FTIR spectra exhibited 2 kinds of distinctive characteristics. The former was 2 AB lines (Group-A; 1465, 719 cm−1) with invariable intensity over all QD spectra that were due to bending modes of C-H/C=C of individual PPO, and the latter was 4 AB lines (Group-B; 1378, 1240, 1056, 887 cm−1) with explicit QD dependence that were attributed to bending/stretching modes of C-H/C-N/C-O/C=C of bound PPO hybridized with QD-molecule/cluster. Though the origin of QD-dependent Group-B lines was identified as PPO bound to QD, we judge that the observation of QD-dependent FTIR lines is a very distinctive result.