The [Ru(bpy)3]2+ (bpy = 2,2′‐bipyridine) as redox photosensitizer has been intensively investigated for molecular photocatalysis and assist in absorbing visible light wavelength range to induce the charge transfer. However, the dimerization and self-degradation of the pyridyl ruthenium complex limit its lifetime and photocatalytic activity [1,2]. Numerous attempts have been made to encapsulate ruthenium complexes inside porous inorganic scaffolds such as zeolites, owing to their excellent chemical stability [3–5]. Zeolitic imidazolate frameworks (ZIFs), which are topologically isomorphic with zeolites, have recently been reported as host materials, and many studies evaluating their applications are underway. However, the encapsulation of the photosen-sitizer [Ru(bpy)3]2+ in ZIF cages is yet to be reported.

However, this strategy which uses a molecular linker, encounters some drawbacks, such as limited immobilization of the catalyst on the pore surface, small diffusion coefficients of target molecules in the nanopores, and leaching out due to breaking the molecular linker.

Zeolitic imidazolate framework-11 (ZIF-11) is formed by the extended 3D zeolitic network (RHO) with zinc ions and tetrahedral-coordinated benzimidazole (BIm) linkers. ZIF-11 is an ideal host material for encapsulating large functional molecules because of its large pore diameter (14.9 Å) and narrow aperture (3.3 Å). [6, 7] In particular, ZIF-11 has a kinetic molecular diameter (13.5 Å) similar to that of [Ru(bpy)3]2+; therefore, its pore cage is suitable for the encapsulation of [Ru(bpy)3]2+, as displayed in Fig. 1. 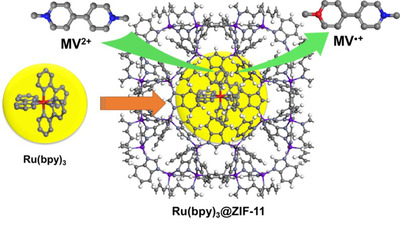 Figure 1. Schematic illustration of the encapsulation of Ru(bpy)3 in ZIF-11.

Following a procedure reported previously, BIm (0.12 g, 1 mmol), which is the ligand of ZIF-11 and ZIF-12, was introduced into a glass vial (capacity: 20 mL) containing methanol (2.5 mL), followed by the addition of toluene (4.6 g, 50 mmol) and ammonium hydroxide (0.1 g) under mild stirring at 25 °C. Zinc acetate dihydrate (0.11 g, 0.5 mmol) and cobalt(II) acetate tetrahydrate were used as metal ion sources for ZIF-11 and ZIF-12, respectively, and each was dissolved in a separate glass vial (capacity: 20 mL) containing methanol (2.5 mL). Each asprepared metal–methanol solution was poured into the respective previously prepared ligand solution and stirred for 3 h at room temperature to initiate crystallization. The solutions gradually turned into milky suspensions. The assynthesized product (ZIF-11 or ZIF-12) was obtained by centrifugation, washed with ethanol, and thereafter dried overnight at room temperature in air. The yields of ZIF-11 and ZIF-12 were approximately 75 and 70 %, respectively.

The procedure for the encapsulation of [Ru(bpy)3]2+ in the different ZIF cages was identical to that described in subsection 2.2, excepting the addition of an appropriate amount of Ru(bpy)3⋅Cl2 to the ligand solution. Following crystallization, a dense yellow product was obtained by centrifugation and washed with ethanol until a colorless supernatant solution was formed.

To investigate the photocatalytic performance of the series of ZIF composites, in-situ spectroscopic measurements were performed of the conversion of the methyl viologen ion MV2+ to the viologen radical cation MV•+. MV2+ is a widely used molecular redox mediator in the Ru(bpy)3 photocatalyst system, and its conversion into MV•+ in acetonitrile was investigated by UV–vis spectrometry. Identical round pellets were made from all the ZIF composites to test their photocatalytic activities under identical conditions. A 10-mg round pellet (d = 7 mm) of each ZIF composite was placed on a glass plate (∼7 mm × 15 mm) and thereafter transferred into an airtight quartz cell, following which, 4 mL of 0.65 mM acetonitrile solution of MV2+ and 65 mM of triethanolamine (TEOA) were gently introduced into the quartz cell for each test. The cell was sealed and filled with high-purity argon for 5 min in darkness. The airtight quartz cell was subsequently irradiated using a blue light-emitting diode (LED) lamp (445 nm, 1 W) at room temperature, and the absorbance spectrum for MV•+ was recorded. 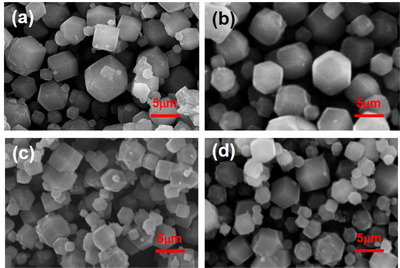 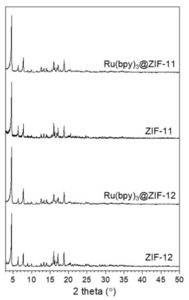 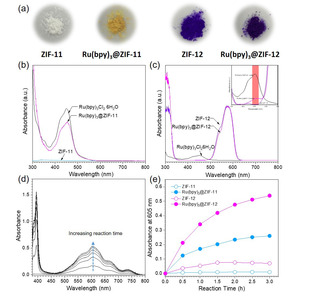 from colorless to green. Upon irradiating the Ru(bpy)3@ZIF-11 pellet, the solution turned blue, and the color intensified with increasing irradiation time. The UV−vis spectrum of the deep blue solution appeared the characteristic peaks at 608 nm corresponding to the MV•+, whose intensity gradually increased with irradiation time. The profile of the yield with respect to reaction time is shown in Fig. 4(e).

The photocatalytic performance of ZIF-12, containing Co2+ as co-catalysts, at the reduction of MV2+ was evaluated in a visible-light-driven catalytic system under identical photocatalytic conditions. As seen in Fig. 4(c), Ru(bpy)3@ZIF-12 achieved superior photocatalytic reduction of MV2+ than Ru(bpy)3@ZIF-11 did, showing an almost linear increase with irradiation time. This indicates that ZIF-12 is an effective host material for efficient electron transfer from the excited [Ru(bpy)3]2+ moiety to the ZIF-12 framework [9–11].

Following the reactions, there was no leaching of the encapsulated [Ru(bpy)3]2+or perceptible structural change in Ru(bpy)3@ZIF-11 and Ru(bpy)3@ZIF-12. These results reflect the excellent stability of the photocatalytic system.

This work was supported by a Research Grant of Pukyong National University (2019 year).