We have studied the optical and structural properties of CsPbBr3 perovskite nanocrystals (NCs) fabricated with various reaction times. The temporal evolution of the ensemble optical properties, such as absorption and fluorescence (FL) spectra and photoluminescence quantum yield (PLQY), was recorded under a set reaction temperature (170 °C) and various amounts of time (5 s – 60 min). The FL intensity of the CsPbBr3 NCs gradually decreased with increasing reaction time, and the observed PLQY of the CsPbBr3 NCs ranged from less than 20% up to 35% because of the enlarged crystal size and the induced charge trap states. The FL peaks of as-obtained CsPbBr3 NCs were tuned in the range of 516.8 to 526.8 nm with increasing reaction time as a result of the ripening phenomenon. Transmission electron microscopy and selected area electron diffraction analysis were performed to analyze the structural properties. The results revealed that the average edge length of CsPbBr3 NCs with a reaction time of 5 s was 13.4 nm and confirmed that the cubic crystal structure was well ordered.

All-inorganic cesium lead halide perovskite nanocrystals (NCs) have attracted significant attention because they demonstrate higher tolerance compared to organic-inorganic perovskites such as CH3NH3PbX3 NCs in applications such as light-emitting diodes and solar cells [1, 2]. CH3NH3PbX3 perovskites are also strongly associated with autodegradation because of their intrinsic instabilities [3]. So it is necessary to realize an efficient strategy for solving these problems. The thermal durability of organic-inorganic perovskites is regarded as one of the most critical issues for solar cell performance [4]. Perovskite materials are vulnerable to damage during thermal annealing, and heat dissipation is known to have an influence on perovskites, which results in thermal-induced mechanical stress and structural evolution within the NCs [5]. In organic-inorganic hybrid perovskites, the occurrence of a structural phase transition is correlated with its own characteristics and the contents of ambient air, temperature, and pressure, which have an effect on the durability of perovskite solar cells [6]. Replacement of the methylammonium (MA) cation with the less active cation of Cs can allow CsPbBr3 NCs to exhibit superior thermal stability, chemical durability, and striking optical properties [7, 8]. The purpose of substituting MA cation is to form a more stable cubic phase, along with the appropriate modulation of the conduction band of the perovskite, which is the key feature to achieve stability [9]. Therefore, tailoring the optical properties of CsPbBr3 NCs to make them more suitable for application is a promising approach [10]. CsPbBr3 NCs can be fabricated employing a method in which oleylamine (OAm) and oleic acid (OA) are used as capping agents. The carboxylate and amine functional groups of OA and OAm are attached to the surface of the NCs during the reaction, resulting in the stability of the NCs. These long-chain hydrocarbon ligands promote the dispersion of CsPbBr3 NCs in various organic media [11]. In particular, to fulfill the requirements for optoelectronic devices, the optical properties, growth stage, morphology, and structure of CsPbBr3 NCs should be regulated during reproducible preparation, and various challenges in the synthetic strategy should be addressed [12].

To obtain more insight into this process, we here report the optical properties of CsPbBr3 perovskite NCs fabricated with various reaction times. The UV-vis absorption and fluorescence (FL) measurements were conducted with a focus on the deterioration of the optical properties of the CsPbBr3 NCs. Significant changes were also observed in the photoluminescence quantum yield (PLQY) of the CsPbBr3 NCs with various reaction times. In addition, the single-crystalline cubic-phase CsPbBr3 NCs and their size distributions were determined via field-emission transmission electron microscopy (FETEM).

For the preparation of Csoleate, Cs2CO3(0.391 g, 1.2 mmol), OA (1.27 mL, 4 mmol), and 1-octadecene (18.73 mL) were loaded into a 100 mL three-neck flask and vacuumed for 1 h at 120 °C. Then, the mixture was reacted at 160 °C under flowing N2 gas until the precur-sor solution was completely dissolved. Because Cs-oleate precipitates out of 1-octadecene at room temperature, it needs to be preheated to 100 °C before use. Next, for the synthesis of CsPbBr3 NCs with vari-ous reaction times, PbBr2 (0.149 g, 4 mmol) and 1-octadecene (18.73 mL) were placed in a 100 mL three-neck flask and vacuumed for 1 h at 120 °C, after which OA (1 mL) and OAm (3 mL) were injected at 120 °C. After PbBr2 was completely solubilized, the mixture was heated up to 170 °C, and 2 mL of the Cs-oleate stock solution was injected swiftly into the reaction system. Subsequently, the sample was ob-tained after a set reaction time (5 s, 1, 5, 10, 20, 30, and 60 min). Then, the reaction mixture was cooled down with an ice-water bath. The resulting mixture was precipitated with -butanol by centrifugation at 7,000 rpm for 10 min. After centrifugation, the supernatant was eliminated, and the resulting precipitate was obtained. The resulting precipitate was re-dispersed in toluene for UV-vis and TEM measure-ments. UV-vis absorption and FL measurements of the CsPbBr3 NCs were performed using a FLAME-S spectrophotometer (Ocean Optics Inc., Largo, FL, USA) at room temperature. The crystalline structure, morphology and size distributions of the CsPbBr3 NCs were investi-gated by using a FETEM (Tecnai G2, F30 S-Twin, 300 keV, Thermo Fisher Scientific, Waltham, MA, USA). 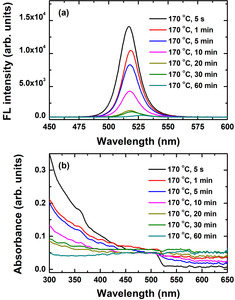 Figure 1. (a) Fluorescence and (b) absorption spectra of CsPbBr3 nanocrystals with various reaction times. 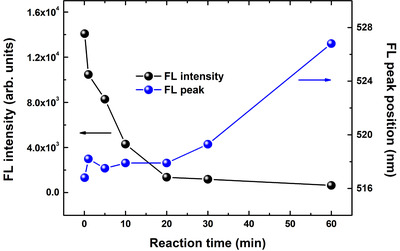 Figure 2. Fluorescence peak position and intensity of CsPbBr3 nanocrystals as a function of reaction time. 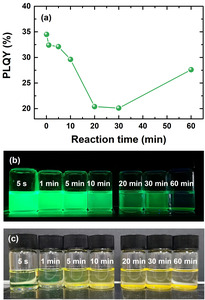 Figures 4(a) and 4(b) represent the low-magnification bright-field TEM image and selected-area diffraction (SAED) pattern of CsPbBr3 NCs on the specific high temperature (≥130 °C) and reaction time (5 s). As shown in Fig. 4(a), almost all of the square-shaped CsPbBr3 NCs uniformly formed at 170 °C, which is well-matched with already reported morphological characteristics of conventional colloidal CsPbBr3 NCs [16,21]. The SAED ring pattern in Fig. 4(b) indicates that the lat-tice spacing of 0.41, 0.29, and 0.21 nm corresponds to the (110), (200), and (220) lattice planes, which agree well with the interplanar spacings of cubic-phase CsPbBr3, respectively [22]. The nanostructural characteristics of the CsPbBr3 NCs are also confirmed via the high-resolution TEM image depicted in Fig. 4(c) and fast Fourier transform pattern obtained from [001] beam direction (Z, zone axis). The lattice spacing of 0.41 and 0.58 nm corresponds to the (110) and (100) interplanar spacings of cubic-phase CsPbBr3, respectively [22, 23]. The number of CsPbBr3 NCs and size distributions is plotted with Gaussian distributions, as shown in Fig. 4(d), and the average size of the CsPbBr3 NCs is 13.4 nm. The histogram of the particle size distribution for the CsPbBr3 NCs was obtained by using ImageJ software [17, 24]. 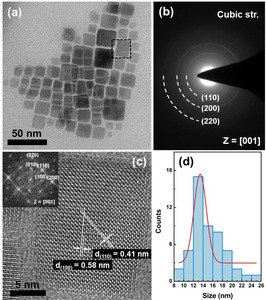 Figure 4. (a) Bright-field transmission electron microscopy image and (b) selected-area diffraction pattern of the CsPbBr3 nanocrystals (170 °C, 5 s). (c) High-resolution transmission electron microscopy image from the black dotted box in (a) and the inset is a fast Fourier transform pattern of corresponding image. (d) Histogram of the size distribution of the CsPbBr3 nanocrystals.

We investigated the influence of reaction time on the structural and optical properties of assynthesized CsPbBr3 perovskite NCs. The reaction conditions of CsPbBr3 NCs can significantly affect the structure and crystal form of the NCs. The redshift of the FL wavelength and resultant decrease in the total absorption intensity with increasing reaction time was attributed to large CsPbBr3 crystal growth by the ripening process. With increasing reaction time, the FL intensities and PLQYs gradually decreased because of the loss of quantum confinement and formation of charge trap states. TEM observations demonstrated that the CsPbBr3 NCs with an initial reaction time of 5 s were well-crystallized in a cubic lattice. Our observations provide clear evidence that the CsPbBr3 perovskite NCs are significantly affected by the reaction conditions, which can lead to significant changes in the particle morphology and associated optical properties. The results of this study suggest the importance of investigation of the optical properties in CsPbBr3 NCs with various synthetic factors affecting the reliability and durability of optoelectronic devices.

This work was supported by the National Research Foundation of Korea (NRF) grant funded by the Korea government (MSIT) (NRF-2021R1A2C1003074).