A metasurface is a two-dimensional array of resonators with subwavelength dimensions and periods, which can be engineered to have desirable properties absent in natural materials. Several photonic applications such as flat optics, sensors, and photodetectors are based on metasurfaces due to their flexibility in manipulating electromagnetic fields at the sub-wavelength scale [1–6]. In particular, dielectric metasurfaces can support Mie resonances with various types of multipole moments capable of efficiently boosting nanoscale light-matter interactions [7–9]. Such metasurfaces have been utilized to enhance photoluminescence, harmonic generation, and nonlinear mixing, etc. in optically active materials including III-V semiconductors and lowdimensional materials [10–14]. Further enhancement is possible by realizing resonances with high quality factors (Q), which increase local photonic density of states. In metasurfaces, high quality factor resonances are typically realized by introducing an asymmetry into an otherwise symmetric unit cell. This distorts the symmetr-protected ‘dark’ Mie resonances and allow them to couple with the incident radiation, thereby converting the ‘dark’ bound states in the continuum (BIC) into quasi-bound states in the continuum (quasi-BIC) [15]. Various types of high-Q metasurfaces with asymmetric unit cells such as a dimer of ellipsoids, split ring resonators, distorted cubes, and double bar structures were reported to be extremely effective in enhancing light-matter interactions [16–19].

Metasurfaces with quasi-BIC are known to have a quality factor of resonance that is inversely proportional to the square of the asymmetry parameter. Therefore, high-Q resonances can be achieved through minimal adjustments using a symmetric resonator. For metasurfaces designed for visible or near-infrared wavelengths, the typical size of an individual resonator is of the order of 100–300 nm and introduced asymmetry must be of the order of a few tens of nanometers. This critical dimension requisite is extremely difficult to achieve with commonly used, scanning electron microscope (SEM)-based electron beam lithography (EBL) systems and generally require extremely expensive e-beam writers with acceleration voltage of ~100 kV. Therefore, a high-Q metasurface that can be fabricated without expensive lithographic tools is expected to significantly benefit research on metasurfaces and enhanced light-matter interactions.

In this study, a fabrication method for high-Q metasurfaces operating at near-infrared wavelengths without employing a high-end e-beam writer. Typically, asymmetric dielectric metasurfaces are fabricated in a particular order [20]. First, a hard mask with an asymmetric pattern is created using EBL atop a dielectric film. Then, the asymmetric pattern is transferred to the underlying dielectric film in the process of dry etching. This standard process creates resonators with in-plane asymmetry. The proposed method begins with the creation of a hard mask with a large, symmetric pattern that can be easily handled with common SEM-based EBL systems (Fig. 1). Following this, the pattern is transferred to the film in the dry etching step, as in the conventional method. Subsequently, an additional dry etching is applied at a non-vertical angle, thereby creating non-vertical sidewalls and out-of-plane oriented asymmetry. The etching angle can be controlled either by tilting the loading surface of the handling wafer, or by using etching facilities with angle controllability such as argon ion beam millers. Therefore, the metasurface with out-of-plane asymmetry can be practically realized but, nevertheless, remains unexplored. Finally, using full wave electromagnetic simulations, the optical properties of such metasurfaces are analyzed and the physical origin of their resonances is discussed. 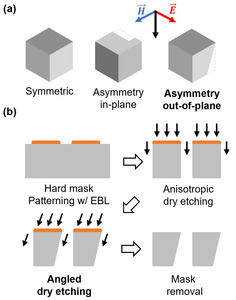 For electromagnetic simulations, a python-based finite difference time domain (FDTD) method library called MEEP was employed [21]. The proposed metasurface comprised an array of silicon cubes with slightly non-vertical sidewalls along one side (Fig. 2). The length of each side of the cube () was 300 nm, and period of the array () was 470 nm in both the x and y directions. Structural asymmetry was controlled by the amount of undercut () which varied from 0 to 100 nm. The two vertical sidewalls of the cubes were normal to the axis, and the non-vertical sidewall faces the -direction. The wavelength window for the simulation was 1,000 to 1,500 nm, considering that silicon is nearly lossless and exhibits a high refractive index of ~3.6. The simulation was run with a mesh size of 10 nm, until the remnant electric field across the entire simulation volume dropped below 10−7 of the initial electric field. Incident radiation propagated in direction, with a -polarized electric field and a -polarized magnetic field. The radiation was launched 450 nm above the metasurface and was transmitted through the metasurface in the normal (-) direction, and the transmitted radiation was collected by a flux monitor also placed 450 nm below the metasurface. Electric field distribution within the metasurface was also recorded using a separate near-field monitor. In addition, a separate simulation without any structure was performed to normalize the transmitted flux and electric field distributions. Perfectly matched layers were placed on either end of the + and - sides to preclude simulation artifacts in edge reflections. 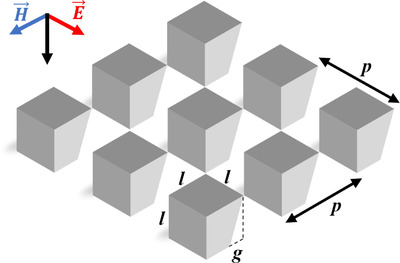 Post simulation, the Q-factor of the resonances was extracted by fitting the transmission spectra with the following Fano formula [22],


Here, ω is angular frequency, ω + represents the background spectrum, is the amplitude of the resonant mode, is the asymmetry parameter of the Fano resonance, and γ is loss rate. Quality factor of the resonance can be calculated as = ω0/2γ. As quasi-BIC is essentially an interference of a broad resonance (continuum state) and a sharp resonance (bound state), we expect the line to be asymmetric rather than Gaussian or Lorentzian.

Mie modes contributing to the resonances are analyzed with multipole decomposition studies. From electric field distribution within the resonators, multipole moments can be calculated using the following equations [20, 23], 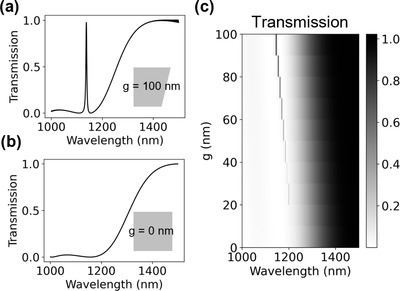 For a more quantitative analysis, Q-factors of the resonances were extracted using Eq. (1) and plotted in Fig. 4. The Q-factors increase divergently as approaches zero, implying the presence of quasi-BIC. Q-factors up to 7913 were observed at = 20 nm; although higher Q-factors were expected for smaller values, limited computational resources made it difficult to observe resonances for values below 20 nm. Nevertheless, the results indicate that it is practically possible to incorporate quasi-BIC by introducing an out-of-plane asymmetry.

Figure 4. (a) Simulated transmission spectrum for = 20 nm (black dot) and its Fano fitting curve (red dashed line), showing an extracted Q-factor of 7913. (b) Extracted Q-factors versus .

The electric field distribution of the resonant mode for a sample with = 100 nm is shown in Fig. 5. A strong field enhancement up to a factor of 12 is observed, which becomes larger for resonances with a smaller and larger Q-factor (data not shown). Moreover, the electric field distribution describes a circular pattern in the plane, implying an existence of inductive displacement current and a corresponding excitation of a magnetic dipole oscillating the in -direction. A pure electric or magnetic dipole is a ‘dark’ mode because it does not couple to external radiation incident in its oscillating direction. Therefore, the detection of such modes provides further proof of the quasi-BIC nature of the resonance, such that the out-of-plane magnetic dipole mode corresponds to the ‘bound state.’

Further quantitative analysis of the nature of the resonance was performed through multipole decomposition studies using Eqs. (2)-(7), the results for which are shown in Fig. 6. For a metasurface with perfectly symmetric resonators ( = 0 nm), the dominant multipolar component for a broad transmission minimum near wavelength of 1,100 nm is found to be a -oriented magnetic dipole (), along with similarly large -oriented electric dipole (). When the out-of-plane symmetry is broken ( = 100 nm), decreases considerably resulting in the emergence of with a scattering field amplitude enhanced by a factor greater than five. This implies that most of the energy induced in is transferred to and the inward coupled electromagnetic energy is stored owing to its inability couple directly to the normally incident radiation. Therefore, the resonance can be interpreted as a bound state () weakly coupling to a continuum state (), creating a quasi-BIC with Q-factor inversely dependent on .

Figure 6. Multipole decomposition studies for samples with (a) = 0 nm and (b) = 100 nm. In these structures, toroidal dipole moment is found to be very small and is omitted in the spectra.

Furthermore, the role of the undercut in the coupling of the bound and continuum states can be explained as follows. In a perfectly symmetric cube, incorporates an electric field that circulates in the plane, while in , the electric field circulates in the plane. Despite the presence of a common electric field component between the two modes, the parity of the field is opposite in the upper and lower halves of the resonator for . In other words, field overlap between the two modes perfectly cancel out, which means that no net energy transfers from to mode. Therefore, in a perfectly symmetric cube the mode cannot couple to incident radiation and remains a perfectly bound state [Fig. 7(a)]. In a resonator with undercut, the volumes of the upper and lower parts of the resonator differ, and is distorted such that two different parities of do not even out. This leads to a non-cancelling field overlap between and modes such that excitation of induces electromagnetic energy transfer into [Fig. 7(b)]. 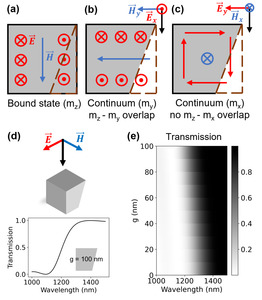 The aforementioned mechanism implies that the coupling between two modes could potentially be absent for a different polarization. If the incident magnetic field is polarized in the direction such that generated magnetic dipole moment is normal to the two vertical sidewalls, then the distortion of induced by the undercut primarily affects parities of . As solely contains the and components of the electric field, the field overlap remains unaffected by the mode distortion and no coupling between and can be established [Fig. 7(c)]. This is clearly illustrated in Figs. 7(d) and 7(e), where transmission with cross-polarized incident radiation does not exhibit any high-Q resonances despite apparent symmetry breaking in the outof- plane direction. It is noteworthy, that even with cross-polarized light, quasi-BIC can be excited from different multipole modes with different symmetries, such as in-plane electric dipole and out-of-plane magnetic dipole modes, albeit in different wavelengths.

In this study, the formation of quasi-BIC induced by out-of-plane symmetry breaking was investigated in metasurfaces. A sharp resonance with a Q-factor inversely proportional to the degree of undercut was observed, which is strongly dependent on the polarization of incident radiation. Multipole decomposition studies revealed the detailed nature of the resonances and the role of undercut in establishing the quasi-BIC. The proposed method presents an additional tool for controlling the high-Q resonances which offers great tunability for metasurface applications. Furthermore, the proposed fabrication method of tilted dry etching can be applied to dielectric resonators that are considerably smaller or larger for operation in different wavelength ranges spanning from visible to far-infrared. While our calculation does not include effect of a substrate and may not fully reflect optical properties of metasurfaces in realistic systems, qualitative agreement may still be expected due to a relatively low refractive index of commonly used substrates (~1.52 for glass) compared to that of the resonators (~3.6). Therefore, this study is expected to introduce several possibilities for application of high-Q metasurfaces in enhancing light-matter interactions in various semiconductors and low-dimensional quantum materials.

This project is supported by a National Research Foundation of Korea (NRF) grant funded by the Korean Government (MSIT: NRF-2021R1C1C1010660) and a 2020 Research Grant from Kangwon National University. The authors would like to thank Editage (www.editage.co.kr) for English language editing.