†These authors contributed equally to this work.

The scanning transmission X-ray microscope (STXM) beamline at the Pohang Light Source was recently setup for in-situ heating. In this setup, the STXM is operated normally with ~30 nm diameter focused X-rays, and the heating temperature is manipulated using control software. The upper limit and maximum heating rate of the heating temperature are 900°C and 900°C/s, respectively, and the time taken to reach the target temperature is less than ~10 s. The heating setup was used in the following examples: step-like heating of solderin particles of up to 380°C, step-like heating of Au thin films of up to 900°C, and pulse-like heating of submicron FeOx particles at 900°C for 20 s.

In-situ spectroscopy techniques can be a powerful tool for probing chemical states and thus gleaning key insights into reaction mechanisms. However, successfully performing in-situ experiments is often difficult [1, 2]. For instance, practical concerns such as thermal drifting, temperature stability, and power supply efficiency are common when performing the in-situ heating of nano/microscale materials. For in-situ heating transmission electron microscopy (TEM), previous use of a specimen holder with an attached filament heater caused problems [3]. There have been improvements that have made performing in-situ heating easier such as the development of microelectromechanical system (MEMS)-based heating microchips [4, 5]. MEMS-based chips enable researchers to conduct thermal studies in a controlled and stable environment, even at 1000°C [6,7]. It is believed that equipping scanning transmission X-ray microscopes (STXMs) with in-situ heating chips can enhance their imaging capabilities. Stable in-situ heating with an STXM would ensure that scanning performance including chemical analysis is maintained at elevated temperatures.

The in-situ heating functionality enables researchers to study the thermal degradation of industrial functional materials after heat treatment, and STXMs with equipped with in-situ heating chips can enable various investigations of the thermal processes of these materials. An in-situ TEM technique has been used in industrial applications to understand changes in morphology and chemical composition of energyrelated materials, leading to improved understanding of the evolution of material degradation during heating [8].

In this study, a chip-based setup for nominal in-situ heating up to 900°C with a STXM is introduced. The heating or cooling target temperature was reached within ~10 s of loading submicron samples. This fast-heating capability is useful for practical specimens such as steel, for which the heating speed and temperature of the annealing process during steel tempering are the determining parameters for substantially improving its main properties [9].

All the data that were used in this study were obtained using the STXM at the 10A beamline of the Pohang Light Source (PLS-II). Details of the STXM and beamline are available in Shin [10]. The main optical components of the STXM are shown in Fig. 1(a). In the STXM, incoming X-rays are focused by a Fresnel zone plate (ZP) onto a sample. An order-sorting aperture (OSA) is inserted between the ZP and X-ray focus (or the sample position) to block higher-order diffraction X-rays. Transmitted X-rays are collected by a photon-counting detector (PCD) that is comprised of a visible-light converting phosphor layer coupled to a photomultiplier tube (PMT). At a specific photon energy, an STXM image is obtained by measuring the transmitted X-ray intensity while scanning the sample perpendicular to the X-ray direction at the focal plane. A stack of images is acquired by imaging at different photon energies. Local space-resolved spectral information can be observed using the stack of images.

Figure 1(a) shows the in-situ heating setup of Norcada Inc. [11], as mounted in the sample stage of the STXM at PLS-II. The three kinematic-mounting posts of the in-situ heating holder are also shown. The holder includes a microchip, a microchip cover, and electrical contacts, which are all inside the red-dotted circle. A detailed view of the microchip is provided in Fig. 1(b). The four gold-coated contacts on the chip edge are used for power connection and temperature sensing. A spiral-round shape microheater pattern [Fig. 1(c)] was made on an ~30 nm-thick, 800 × 800 µm2 silicon nitride (SiN) membrane, where the area is indicated by the red box and is transparent to X-rays. The silicon-based chip has a frame with an area of 5 × 7 mm2 and thickness of 300 µm. The microheater pattern generates heat via Ohm’s. The outer diameter of the microheater pattern is ~400 µm [Fig. 1(c)]. The heating area is within a diameter of 400 µm and has an isothermal region with a diameter of ~100 µm [11]. In Norcada [11], optical-microscopic images of the microheater at 700, 850, and 1100°C are shown. The microheater was designed to heat to 1100°C with power of 30 mW. It should be noted that the temperature can be as high as ~1100°C but is software-limited to 900°C for stable operation. In this isothermal region, there are 19 sample wells in 5 arrays [Fig. 1(d)]: 18 wells have a diameter of ~4 µm and ~250 nm deep structure, and 1 well is ~4 µm wide, ~7 µm long, and has a 250 nm deep edge-rounded triangular shape. A sample can be mounted in each of the 19 well structures. On the opposite side of the well structure, a ~30 nm thick SiN layer supports the sample.

The software and controller configuration were designed and manufactured for maximum performance at pressures lower than 9 × 10−5 mbar. After installing the setup, the heating holder was tested in the heat-applicable configuration of the STXM at PLS-II. Temperature was controlled using custom-programmed software, which was precalibrated for controllable power supply. Pre-calibration was performed after measuring the applied current, bias, and annealing temperature. In a vacuum before loading a sample, the increase and decrease in the temperature is achieved within 1 s. When a sample is loaded, the temperature reaches the target temperature typically in less than 10 s.

Figure 2 shows an example of heating soldering-material particles. A temperature profile of the heating as a function of time is shown at the left bottom of the figure. In the temperature profile, the x-axis represents time in seconds, and the y-axis represents temperature in degrees Celsius. In the experiment, the heating rate was set at 100°C/s, and the cooling rate was set likewise. As is apparent in the figure, the temperature profile was regarded to be reliable for most of the experiment. The blue-box area is magnified as shown in the upper left panel, which shows that the temperature increased from 200 to 300°C in 1 s. This fast heating was achieved because the soldering-material particles were the only load on the heating pattern. Images were taken at room temperature (RT), at higher temperatures (heating rate: 100°C/s), and during elapsed times at 350 and 380°C. Each image was captured at the X-ray energy of ~708.2 eV. The size of each image was 5 × 4 µm2 with a step size of 40 nm and 125 × 100 pixels. The images are shown on the right of the figure. At the temperature of 100°C, no morphological change was observed relative to that at RT; hence, the image is not included in the figure. The images show that the soldering-material particles started to deform at 300°C, to melt at 350°C, and to vigorously melt at 380°C.

Figure 2. In-situ heating of soldering-material particles. The heating-temperature profile is shown on the left side. The upper left panel is a magnified plot of the area inside the blue box. The heating rate was 100°C/s. STXM images of the particles obtained at different temperatures, and in time sequence at 350 and 380°C, are shown on the right side. Each image size is 5 × 4 µm2 with a step size of 40 nm.

Figure 3 shows an example of the heating of a thin Au film. The Au film was deposited on the microheater pattern, which is a square covering three of the well structures in Fig. 1(d). The thickness of the Au film was 20−40 nm, and the temperature profile of the experiment is shown in the left-side of the figure. The blue-boxed areas are enlarged to show details of the temperature settling time, where the heating and cooling rates were both 10°C/s. Images taken during heating at several temperatures are shown on the right of the figure. The images were captured at the X-ray energy of 525 eV. Each image size is 8 × 8 µm2 with a step size of 50 nm and 160 × 160 pixels. The heating temperature was increased to 900°C, and morphological changes were observed as the annealing temperature increased, resulting in dewetting of the Au film at higher temperatures. The left-upper temperature profiles indicate that the temperature settled to both 300 and 900°C in about 10 s, which may be sufficient for most applications. It is noteworthy that after 700°C, the heating pattern starts to glow [11], which increases the background counting rate. This effectively results in dark spots in the images above 700°C owing to photon count saturation. The background had a 0 count at RT, which was maintained at 600°C and increased to 350 and 1,850 counts at 800 and 900°C, respectively. The count difference between the maximum and minimum counts was ~1,000 for images up to 500°C and ~1,100 for the images obtained from 600 to 900°C. 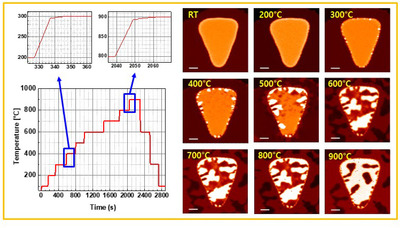 Figure 4(a) shows the saw-tooth-like temperature profile of 30 s continuous heating to 870°C and 30 s continuous cooling to RT for FeO submicron-size particles (Fig. 5). Figures 4(b)–(d) are the temperature profiles of a 900°C single pulse with a duration of 20 s (b), three pulses (c), and random repetitive pulses (d) for heating and cooling rates of 300 and 900°C/s, respectively. The target temperature, measured temperature, and their difference are shown in black, red, and blue colors, respectively. For pulse-like heating at the heating rate of 300°C/s, an ~25°C temperature difference was observed within a few seconds, after which the temperature approached the target temperature (within a difference of several degree °C) in ~10 s. 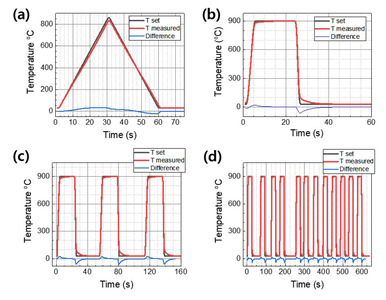 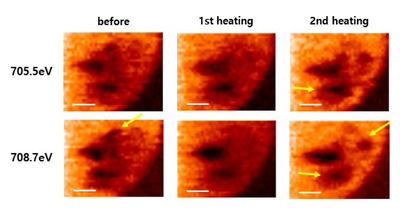 While TEMs provide better spatial resolution along with the elemental composition of samples [8], STXMs provide the chemicalstate along with the oxidation number and electronic structure of a sample [12]. Thus, investigation with STXMs with heating capability can provide complementary and comprehensive information on the effects of annealing on materials.

In summary, we have introduced an in-situ heating setup for STXMs. The heating setup provides fast annealing capability up to 900°C within 10 s for most practical applications. We believe that this in-situ setup can be utilized for diverse applications, such as use in catalytic reactions [1], Li-ion batteries [2, 12, 13], and solar cells [8], providing insight into the thermal processing of materials.