This is an Open Access article distributed under the terms of the Creative Commons Attribution Non-Commercial License(http://creativecommons.org/licenses/by-nc/3.0) which permits unrestricted non-commercial use, distribution, and reproduction in any medium, provided the original work is properly cited.

We designed a magnetic field enhanced microwave large-area plasma source and optimized it for application in thin film deposition. To develop stable and high-density plasma, microwaves were radially injected into the region of an externally applied magnetic field, and plasma parameters were measured using electric and emissive probes. The plasma density and electron temperature at the radial center of the chamber were ~2×1014m−3 and ~5 eV, respectively. The plasma parameters were enhanced by applying an external magnetic field, and the spatial measurements of plasma density and electron temperature indicated that the plasma is stable in the radial central region of the chamber. The plasma potential was measured by different techniques, and a slight difference in the measured potential values was observed.

Considering their electrode-free designs, microwave plasma sources are favored over other nonthermal or thermal plasma sources for thin film deposition. Because of their higher plasma densities and deposition rates than those of direct current (DC)- and radio frequency (RF)-sources, microwave sources have been extensively applied for processes such as plasma etching [1], plasma cleaning [2], thin film deposition [3], and electronic device fabrication [4]. Furthermore, microwave plasma has numerous applications in radiation technology, including abatement of perfluoro compounds [5], wastewater treatment [6], removal of volatile organic compounds [7,8], and reforming technologies [9].

However, when microwave plasma-enhanced chemical vapor deposition (PECVD) is used, it is extremely difficult to obtain a large area uniform deposition at low temperatures as required by the industry for thin film mass production [13, 14]. Therefore, to offer a solution for the mass production of thin films, large-area microwave sources must be developed.

In this study, a large-scale magnetized microwave plasma source was designed and optimized for the chemical vapor deposition of thin films. Microwaves were provided by a commercial magnetron resonate at 2.45 GHz and 500 W. These microwaves were fed radially into a cylindrical chamber through a WR284 wave guide. During power delivery, the impedance between the source and load was automatically matched using an auto-matching system. A directional coupler and an RF power meter were employed to monitor the microwave power during discharge.

The experimental setup shown in Fig. 1 consists of a cylindrical chamber 14 cm in diameter and 1 m in length. The base pressure achieved using a rotary vacuum pump followed by a diffusion pump was ~10−7 torr, and the operating pressure was 4×10−4 torr. This pressure range was chosen according to the discharge sustainability. Oxygen was fed into the chamber using a mass controller, and the flow rate was kept constant during different measurements. Although the results of thin film deposition will not be presented here, the chamber was designed for this purpose. A target material holder (zinc target) facing the microwave inlet was installed inside the chamber and oriented at 45∘ to the chamber axis, and a substrate holder facing the target holder was installed to deposit the reactive species on the substrate. The electric field generated by the microwave ionized the oxygen gas and ignited the plasma inside the chamber. The target material was heated through microwave heating, and the sputtered atoms from the target’s surface interacted with the oxygen plasma before being deposited on the substrate. 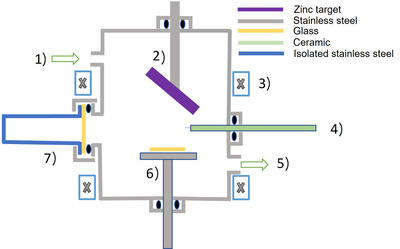 Both single-electric and emissive probes were used to measure the plasma properties, including plasma density, electron temperature, and plasma potential. These probes can be moved radially to measure the spatial variation of plasma parameters.

The electric probe tip was fabricated using a 0.3 mm-diameter, high melting point tungsten wire. The probe wire was enclosed within a thin ceramic tube, and the plasma tip was 2 mm long. The assembly was encased in a stainless-steel vacuum jacket. The emissive probe was constructed as a small half-loop of Kapton wire with a diameter of 0.2 mm and was connected by feedthroughs to an external circuit. The emissive probe had the same circuit as the electric probe except that a DC power supply was used for heating the Kapton wire to the required temperature.

Permanent magnets were attached to the outer surface of the chamber and circulated the chamber into two loops, as shown in Fig. 1. The magnetic field at the tube center was measured to be ~100 mT. The effect of this magnetic field on the results of the analysis of the electric probe was negligible.

The properties of the plasma were measured at different radial directions using a Langmuir probe and an emissive probe. Figure 2 demonstrates the electric circuit used for the electric probe. The external electric circuit swept the probe voltage with respect to the plasma to measure the probe current–voltage I–V characteristics. A sweeping signal from the function generator was amplified by a power amplifier and fed into the plasma through a 100 Ω resistor. The probevoltage was measured at this resistor; the probe-current was measured through a 1 kΩ resistor that was connected to the ground. 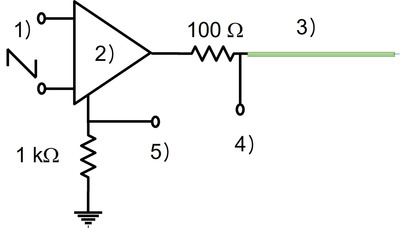 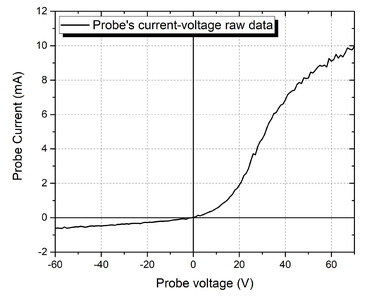 Figure 3. Current-voltage I–V curve of the electric probe swept from -70 to 70 V.

The probe voltage was swept from -70 to 70 V using an external function generator. The sweeping frequency was adjusted to avoid overheating of the probe tip. The measured I–V signals were averaged to remove electromagnetic noise. To perform different numerical calculations on the obtained I–V curves, the raw data signals were numerically filtered using the Savitzky–Golay filter, and the data were then analyzed by a MATLAB code.

Figure 3 shows the probe I–V signals measured at the tube radial center, where the floating potential is observed to be almost zero. In the following section, different methods for calculating the plasma parameters are briefly discussed.

The probe theory [19] indicates that the electron temperature can be measured from the retarding region of the I–V curve, where the probe current can be expressed as follows:

The plasma density can be measured from the electron saturation region as follows:


where is the electron saturation current and m is the oxygen ion mass. The plasma density at the chamber radial center was measured to be ~2×1014 m−3.

Permanent magnets that circulate the chamber were removed, and the plasma properties were measured again at the same position without any external magnetic field. The electron temperature and plasma density in this case were ~3.5 eV and ~6×1013 m−3, respectively. This finding suggested that the magnetic field enhanced the plasma density and electron temperature. Hereafter, permanent magnets were installed again for all of the following measurements.

To measure the radial profile of the plasma, I–V probe curves were measured at different radial positions, as shown in Fig. 4. The plasma density and electron temperature were calculated at each point, as depicted in Fig. 5. 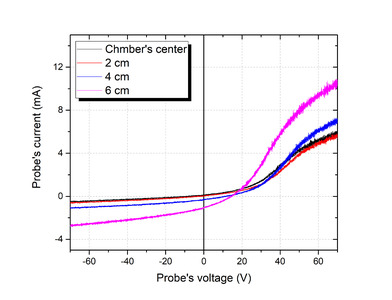 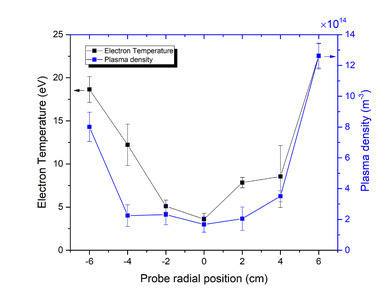 The plasma profiles shown in Fig. 5 demonstrate high values at the tube edges, which suggests the formation of microwave reflection surfaces at these positions. This result indicates the non-formation of an ECR region at the chamber center, which is due to the low value of the external applied magnetic field [21]. Furthermore, the plasma density profile was almost stable at the tube radial center region from -4 to 4 cm, which suggests that the magnetic field has a stabilizing effect on the plasma profile.

The first method involves measuring the onset voltage point (knee point) of the electron saturation region. This method can be performed by linear fitting of both the retarding region and electron saturation region. The plasma potential is the intersection point on these two linear fitting lines. This method is shown in Fig. 6. The plasma potential calculated from this method was 22.1 V. 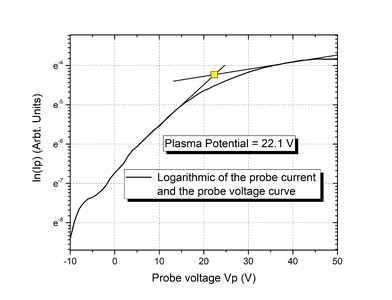 Figure 6. Logarithm of the probe current and probe voltage and linear fitting of the retarding and electron saturation regions.

The second method involved finding the probe voltage, which corresponds to the zero current point at the second derivative of the I(V) curve. This method is illustrated in Fig. 7, and the plasma potential calculated from this method was 21.2 V. 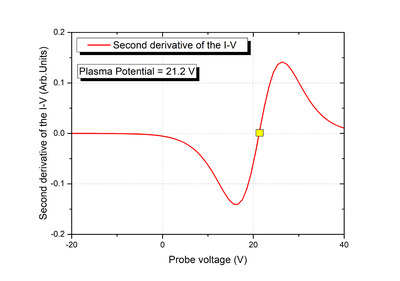 The third method—a more precise method—uses emissive probe analysis [22]. When the probe bias is more negative than the plasma potential, the emissive current can flow from the probe to the plasma. When the probe heating current is increased, the electron saturation current also increases until saturation is reached, and further heating does not vary this saturation state. Then, this value is assumed to be a sufficiently good approximation for the measurement of the plasma potential. The emissive probe I–V signals at different emission currents, which were measured at the tube radial center, are shown in Fig. 8. 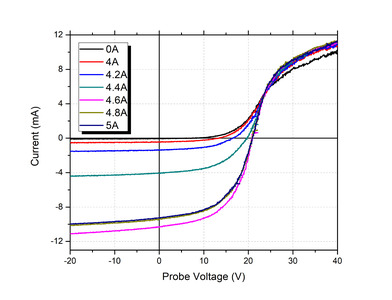 When the probe is biased below the plasma potential, an emitted current arises (negative probe current); when the probe is biased above the plasma potential, electrons are collected rather than emitted. The increased temperature of the probe wire corresponds to increased electron emission, and this can be observed in the increasing magnitude of the current for the more negative probe biases.

Three popular techniques have been used for the analyses of the I– V curve of the emissive probe: i) the separation point method (nonsensitive method), ii) the floating-point method, and iii) the inflection point in the limit of zero-emission method [23]. In the separation method, the lowest potential at which the non-emitting collected current is equal to the emitting collected current is referred to as the plasma potential. For the floating-point method, when the probe emission is increased from non-emission, the floating potential of the probe becomes saturated at the plasma potential. After this point, increasing the emission current will only slightly change the floating potential because of the space charge effects. 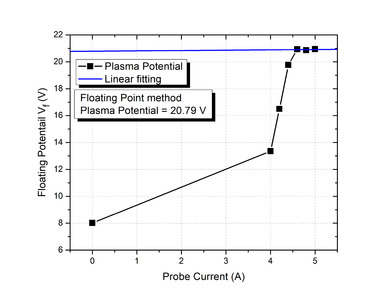 Figure 9. Variation of the floating potential with the probe current for the plasma potential calculation by the floating-point method.

This optimization study investigated the measurement of the plasma parameters of a magnetically enhanced microwave plasma system. Although the externally applied magnetic field was not sufficient to create an ECR region, it stabilized the plasma at the chamber’s radial central region, and a higher plasma density was obtained in this region, thus providing a promising technique for the deposition on different types of thin films. The plasma potential measured using the floating potential method of the emissive probe technique was more accurate than those measured using the other methods owing to the removal of the space charge effects. Moreover, a slight difference was observed in the values of plasma potential obtained using different methods. Therefore, for future research, we recommend conducting elucidative studies on the effects of the externally applied magnetic field on the plasma stability, deposition performance, and quality of the deposited thin films, which is currently an area of particular interest in research.

The author received no financial support for this article.