Understanding the Feedback Circuit in an Atomic Force Microscope

Since the 1900s, the behavior of very small substances, which is difficult to interpret with the general thinking of large objects, has been investigated along with the development of various types of microscopes [1,2]. First attempts have been focused on optically observing very small objects using an optical microscope. However, since the wavelength range of the visible light covers the range between 380 to 750 nm, it is difficult to optically resolve objects with a size less than half the wavelength of the light used due to diffraction limit [3]. Nonetheless, recent advances in optical microscopy approaches, devices, and techniques have enabled the possibility to observe nanoscale objects through optical-based technologies such as a confocal microscope [4–6] and super-resolution fluorescence microscope, which is a truly remarkable breakthrough in the ability to observe, well beyond the diffraction limit [7–10].

Currently, nanoscale science and technology are emerging in the era of the 4th industrial revolution and occupying a very important field in the development of national R&D. The Atomic force microscope (AFM) is an essential key equipment indispensable for Nano research [20–23]. In the academic world, efforts are being made to expand and improve the functionality of the AFM itself whereas its utility and implication are rapidly expanding towards industrial applications beyond the merely research stage. For example, in the semiconductor manufacturing process ultrafine structures (~few nm) are developed making the roughness of the wafer surface extremely critical, which can only be characterized with high resolution (x-axis, y-axis including z-axis) by the AFM in a non-contact and non-destructive way. It is obvious that a simple use of the AFM, without a comprehensive understanding of its principle and operational details, is limiting for further scientific/industrial development. To develop an understating of the AFM, the operational mechanism of the feedback circuit is a key starting point as it constitutes the core of the measurement principle in AFM.

To explain the feedback circuit in an atomic force microscope, each element of the system and its corresponding operating characteristics are introduced. Moreover, the implications of the feedback circuit role for each element and how it is intertwined are presented. As shown in Fig. 1, the atomic force microscope compromises four key components. First is a shape probe to detect precisely the desired physical properties at the pressed point on the surface. The motion of the probe can be detected accurately using an optical lever compromising a laser beam incident on the upper facet of the probe and reflected into a photodetector (quadrant photodiode). The motion of the sample in the x, y, and z-directions is ensured by piezoelectric transducers (PZT) (ceramic materials). The polarization of molecules in the ceramic material is aligned by applying a voltage to it. The movement is controlled in such a way that the volume of the ceramic is physically changed by the variation of the polarization degree (i.e., applied voltage). 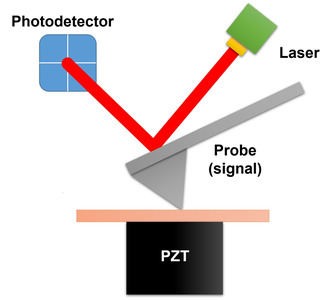 The probe is one important component of the AFM system. It mainly consists of a flexible cantilever beam, at the end of which as conical (or pyramidal) tip is fabricated with an apex tip radius ranging from about 1 nm to several tens or hundreds of nanometers, in commercially available probes. To determine how the force acting on the probe in interaction with the surface, one should calibrate the spring constant of the flexible cantilever and the optical voltage sensitivity from the photodetector with respect to the physical bending of the probe by pushing it onto the sample. For example, if the probe touches the surface and bends upwards by approximately 1 nm, then the degree of pushing force between the probe and the surface is estimated by the elastic modulus of the cantilever. For a cantilever spring constant of 1 N/m, the force in this case is estimated at 1 nN.

The feedback circuit is essential to ‘maintain’ a constant value of temperature, humidity, even the system functionally in a wide variety of uses throughout society. To help understanding a feedback system, a practical example could be that of keeping the water temperature in a bath at 40 degrees at all times, by turning on/off the faucet of hot or cold water to sustain the desired temperature. Important three elements for this feedback system are the signal from the sensor to read the actual temperature, reference for the desired temperature value to sustain, and control (hot/cold water). This feedback procedure might be intelligently and automatically implemented by constructing a return circuit to control the opening and closing of the faucets for hot and cold water, or to compose a return circuit to control the amount of the by immersing it in water with consideration for a slightly improved direction.

An operational amplifier is a single chip composed of many integrated transistors. A series of mathematical operations are made possible by the configuration of passive devices such as various resistors and capacitors connected to the chip, enabling a wide variety of operations. In addition to basic addition, subtraction, multiplication, and division operations, complex operations such as integration, differentiation, and mixing are possible. Thus, it becomes possible to calculate at a uniform and high speed through complex and large-scale configurations.

Figure 3 shows examples of the operational amplifier used in the AFM feedback circuit. The most essential and commonly used basic circuit in an operational amplifier is the inverting amplifier as shown in Fig. 3(a). It is a method to designate how much input voltage to amplify. The triangle in the middle with a number corresponds to a single-chip type operational amplifier, and the amplification factor is determined by the connecting resistors. For example, if 1 kΩ is used for the R1 resistance and 10 kΩ is used for the R2 resistance, the output voltage shows 10 times amplified voltage with respect to input. Thus, value of the output voltage phase shows the phase of the input voltage inverted by 180°. Hence, its name of inverting amplifier. Although it is expressed as amplification, if the value of the R2 resistor is selected to be smaller than the value of the R1 resistor, the output voltage is inverted and a reduced voltage is obtained at the output. Figure 3(b) shows the inverting summing amplifier which sums two different added signals giving inverting polarity of the voltage signals along with their amplification. Similarly, the differential amplifier plays a role of subtracting two input signals with amplification [Fig. 3(c)]. Figure 3(d) shows the buffer, which just passes through the input signals used for preventing the back flow of unwanted electrical signals.

Figure 3. Examples of the operational amplifier used in the AFM feedback circuit.

3.3. Understanding the feedback system in an atomic force microscope

To understand the operation principle of the feedback circuit, it is necessary to understand the variation of signal from the probe compared to the reference voltage signal, which is maintained by changes introduced by the operational amplifiers. Figure 4 shows feedback circuit schematics for understating the operation used in AFM. Figures 4(a)–(c) represent the workflow of the feedback circuit. Consider the case for example where the tip is at a distance from the sample surface and the amplitude measured by the sensor is 3.6 V. This amplitude signal is used as the feedback signal, which is compared to the reference signal (3.5 V), which is selected a set-point for controlling the separation between the tip and the sample. Then, the difference between the measured amplitude and the reference values is spread to the P-gain, I-gain, and D-gain and combined again with inverting summing amplifier. Note that P-gain and I-gain are typically used in practice for the feedback circuit in AFM. Then, the combined signal is directed to the z-axis PZT transductor for sample displacement approaching to the tip [Fig. 4(a)]. After the tip senses the force from the surface by approaching near the sample, the amplitude signal decreases (3.45 V), and the polarity of the subtracted signal flips, which plays a role for direction change of the z-axis PZT motion as a retraction [Fig. 4(b)]. Then the amplitude signal of the sensor goes up (3.53 V) again by retraction, which plays a role for sample approach to the tip. Finally, the gap distance between the tip and sample is controlled by reducing the absolute value of the subtraction between the amplitude and reference signals [Fig. 4(c)]. 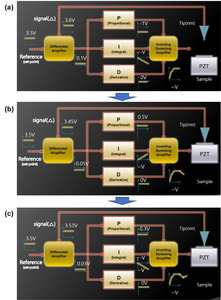 Figure 5 shows the experimental results for the feedback circuit used in AFM. Figure 5(a) shows a real picture of the fabricated analogue feedback circuit using an operational amplifier. The signal is plugged in the circuit for comparing with the reference signal, which represents the desired gap distance between the tip and the surface in AFM. After the signal from the subtraction of the input and reference signals goes to P-gain and I-gain, which are typically used in AFM, two gain signals are combined, and the resulting signal goes to the PZT (z-axis) for movement of the sample to the tip as a control. Figure 5(b) shows the experimental signals. The amplitude modulation mode AFM was used. The red line indicates the amplitude of the AFM probe sensor as a feedback signal, yellow line indicates the phase signal of the sensor, blue line indicates the auxiliary signal, and green line indicates the z-axis PZT signal. As time progresses, the green line goes up, which indicates the tip approaching the sample, and at some point, the tip senses the force of the sample, and the feedback operates for sustaining the distance between the tip and the sample. 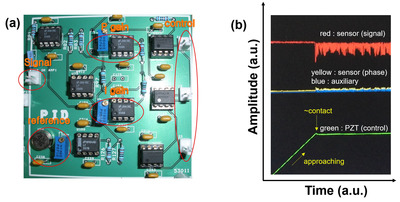 Based on an intuitive understanding of the feedback circuit, one can apply it to various types of AFM with a viewpoint of which ‘feedback signal’ used. Namely, depending on what kind of signal is maintained, various driving methods of the atomic force microscope can be expressed and applied, such as mechanical forces, electrical, magnetic, and optical signals. Recently, instead of simply using only one signal, it is contributing to scientific development through interest and improvement in technology for mixing and measuring two or three signals at the same time. For example, one can measure the electrical properties of a surface using a conductive probe, while the probe follows the surface morphology for obtaining surface topography simultaneously.

This paper offers means to intuitively and easily understand the operation principle of various AFM modes based on the understating of the feedback circuit scheme. It may contribute to the significant increase in scientific application of this extraordinary techniques in various fields of Science at the smallest scales in nature.