Many countries have strived to expand the adoption of renewable power generation in the transition to a low-carbon society. Wind power is recognized as one of the most promising and scalable renewable energy sources for power generation, but the amount of wind power generation is heavily dependent on wind speed. Therefore, techniques that enable the reliable estimation of wind speed have long been under focus. In this study, statistically appropriate probability distribution functions were explored using wind speed measurement data from wind farm sites in the Republic of Korea. In particular, the problem of overfitting was investigated in depth by evaluating the fitness of distributions using different parameters. The suitability of mixed distributions was examined statistically based on the information criteria until suitable distributions were established. The results indicated that monthly wind speed data are a good fit with distinct Weibull distributions; thus, planning for wind power generation in the ROK should consider temporal variations in wind speed as revealed by the distribution analyses.

Global warming is mainly caused by the excessive emission of greenhouse gases (GHGs) and is considered one of the greatest environmental threats worldwide. The Intergovernmental Panel on Climate Change was formed in 1992 to counter climate change, and the Kyoto Protocol, under the United Nations Framework Convention on Climate Change, was signed in 1997 and superseded by the Paris Agreement in 2016. Under the agreement, member countries of the Conference of the Parties (COP) are required to submit national GHG inventories that account for GHG emissions from different sectors. Based on these inventories, it is known that the power generation sector is responsible for a significant portion of GHG emissions, and many countries are striving for the large-scale adoption of renewable power generation. Although the intermittency of renewables poses great challenges in energy system planning, the share of power generation from renewable resources is increasing at a remarkable pace. In particular, the use of wind power has many environmental and societal benefits, and wind energy is regarded as the most mature form of renewable energy from a techno-economic perspective [1]. It has also been noted that the effect of wind generation on climate change may be low alongside various benefits for the environment, economy, and society [2]. Thus, wind power is considered the most promising renewable resource in terms of potential installed capacity [3].

The Korean government recently announced the 9th Master Plan for Long-Term Electricity Supply and Demand, and it is advocated that approximately 26 % of electricity should be from renewable generation by 2034, of which 91 % will be supplied by solar and wind power [4]. In particular, accounting for more than 30 % of renewable energy generation, wind power is expected to become a critical form of power generation. Accordingly, the estimation and prediction of wind turbine output have been the subject of increasing research to better account for the intermittency of wind and variable wind speeds. A wide variety of models and methods have been proposed to predict the power output from wind generation under a range of circumstances [5–7]. The amount of power that can be harvested from the wind largely depends on wind speed and the given specifications of the wind turbine, such as its size and blade length. Thus, it is imperative to accurately estimate wind speeds to project the power that can be generated. Wind speed can generally be considered a random variable following specific distributions and can be modeled with different probability distribution functions of which the Weibull distribution is most widely adopted [8–12]. In previous studies, 2-parameter, 3-parameter, and mixed Weibull distributions have been investigated for their level of fitness for model wind speeds with reference to different criteria [13–15]. It should be noted, however, that most previous studies [8–15] have tested the goodness-of-fit (GOF) of wind speed against a single preselected distribution and employed different criteria, resulting in a lack of consistency in interpretation and comparison. This study was designed to derive wind speed probability distributions based on measurement data from wind farms in the Republic of Korea (ROK) from a statistical point of view. Specifically, a formal statistical procedure for the GOF test was employed to identify the most appropriate distribution function by considering temporal and seasonal variations. Often, as a suitable distribution cannot be identified owing to distinct variability over a relatively short time period, a mixture of different distributions can be explored; however, this may lead to overfitting, particularly when comparing the GOF for distributions with different parameters. Therefore, in this study, the Akaike and Bayesian information criteria are proposed for effectively scrutinizing the GOF of mixed distributions.

Even though the effective estimation of wind speed distribution can only be achieved using data with a sufficiently high spatiotemporal resolution, available data related to the operation of wind turbines at wind farm sites is often limited because of the closed nature of the domestic electricity market. In the ROK, as the amount of electricity generation directly affects the purchase price of the governmentowned distribution company (the Korea Electric Power Corporation, KEPCO), it is difficult to secure such a dataset because of the business confidentiality policy of private electricity generation companies. Therefore, publicly available datasets form the main source of information about wind power generation on the ROK, complemented by some limited information obtained through restricted access granted by power generation companies. The daily average wind speeds from individual wind turbines at three wind farm sites, Hankyung (HK), Sungsan (SS), and Taebaek (TB), in Korea were obtained from 2018 to 2020, as shown in Table I. Note that one of the nine turbines at the HK site was excluded from the analysis because of data unavailability.

It is assumed that daily wind speed follows an identical distribution within a particular month and thus, its distribution is estimated monthly for each site. This assumption takes seasonal (i.e., monthly) variations in wind speed into account while acquiring a sufficiently large number of samples. For example, 93 samples were available for January at the HK and SS sites (i.e., 93 = 31 days/year × 3 years). Figure 1 depicts the variations in daily wind speeds at the different sites and Fig. 2 compares the monthly average daily wind speeds. Significant differences were observed in the monthly average wind speeds, which indicates that seasonal variations must be accounted for. 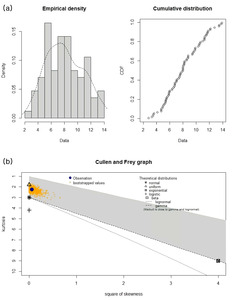 Once several candidate distributions were identified, the parameter estimation of the corresponding distributions was performed using classical statistics, such as maximum likelihood and moment. The maximum likelihood method is the most popular method when the sample size is greater than 30, which was employed in this study unless otherwise specified. Statistical analyses were conducted to estimate the monthly wind speed distribution for each of the wind farm sites using MINITAB Release 19 and R 4.1.2.

3. Results and Discussion of GOF Analysis 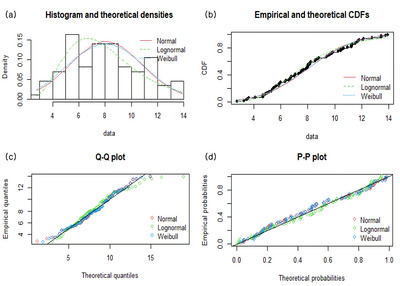 Although providing intuitive insights that can help guide subsequent analysis, these graphical approaches have limited quantitative value. A more rigorous analytical approach to evaluating the GOF for parameter estimation often involves statistical hypothesis testing. In this case, the null hypothesis, 0, is ‘The wind speed data follow a specified distribution.’ The Kolmogorov–Smirnov (K–S) test is one of the most popular approaches for determining whether a sample comes from a population with a specific distribution [17]. Given ordered data points in ascending order (i.e., 1, 2, … , ), the K–S statistic quantifies the distance between the empirical distribution of the sample and the cumulative distribution of the reference distribution. Denoted by , the K–S test statistic is defined as follows:


where (·) denotes the cumulative distribution function of the tested reference distribution. It should be noted that the distribution of the K–S statistic itself does not depend on the underlying cumulative distribution function being tested, and tends to be more sensitive near the center of the distribution than that at the tail. Despite its usefulness as a nonparametric test, the K–S statistic may not be the most appropriate choice for analyzing renewable power generation, because important factors such as the intermittency and peak contribution (i.e., capacity credit) of renewables are closely related to the distributional characteristics at the tail [18]. Therefore, the Anderson–Darling (A–D) test is proposed as a potentially more suitable test [19]. The A–D test makes use of the specific distribution in calculating critical values, which is considered more powerful than the K–S test, and is more suitable for parameter estimation in the case of wind speed distributions. Denoted by 2, the A–D test statistic is defined as follows:


0 is rejected when the test statistic calculated from the sample is greater than or equal to the critical value as determined by the prescribed significance level, α. Defined by the probability that an extreme result will be observed if 0 is true, the significance probability -value can also be calculated. A smaller -value indicates that the sample provides stronger evidence against 0, which is rejected if the -value is lower than or equal to the significance level.

Considering that distributions with fewer parameters are preferred in practice, three different 2-parameter distributions, namely normal, lognormal, and 2-parameter Weibull, were explored first to test the GOF for the wind speed data. These candidate distributions were chosen based on a preliminary descriptive statistical analysis and the results of previous studies. Wind speed data from the HK site were used to compare two GOF tests with a significance level of 5 %. 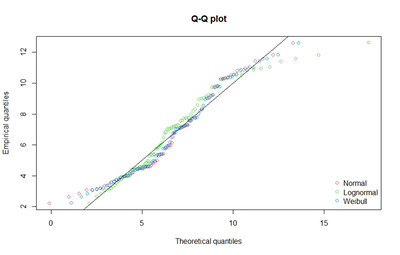 
where β, λ, and τ denote the shape, scale, and the threshold parameter, respectively. Note that β > 0, λ > 0, and ≥ τ. The GOF of the 3-parameter Weibull distribution was tested for the wind speed data from the three sites, which were all well-fitted except for October at the SS site and January at the TB site (Table IV).


where and () denote themaximumlikelihood estimator (MLE) and likelihood function of -parameter Weibull distribution, respectively. It should be noted that the LRT test statistic follows the Chisquare distribution with 1 degree of freedom, that is, LRT ∼ χ2(1). The results of the LRT for the monthly wind speed data are also presented in Table IV, and except for two or three months at each site, the 3-parameter Weibull distributions generally provided a good fit. As an example, there was no evidence that the addition of the threshold parameter improved the GOF for February at the HK site (-value = 0.093), whereas the GOF was significantly improved by introducing this parameter for March (-value = 0.019). 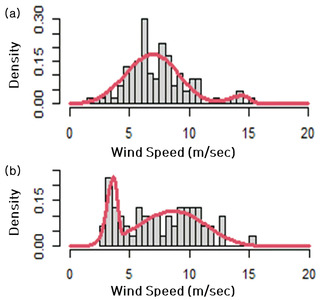 The accurate estimation of wind speed distributions is essential for the effective prediction and management of wind power generation, which plays a central role in expanding renewable power generation and mitigating GHG emissions. That there will be spatiotemporal variations in wind speed is intuitive, and therefore, wind speed distribution will vary greatly between regions and over time. This study explored a formal statistical procedure for deriving appropriate distribution functions that fit monthly wind speed data obtained from three different wind farms in the ROK. The candidate distributions were first identified using descriptive statistical approaches, and then tested for GOF following formal statistical tests. The A–D test may be considered more rigorous than the standard K–S test because it better captures the distributional behavior at the tail of the data distribution. Furthermore, 2- and 3-parameter Weibull distributions were compared for their GOF to the wind speed data, and the results indicated that the wind speed data are better fitted by including additional parameters. When a suitable distribution cannot be obtained, the application of mixed Weibull distributions can be considered, and the problem of overfitting can be addressed by testing the obtained GOF with information criteria, such as AIC and BIC.

One of the major shortcomings of this study is its limited ability to account for possible overfitting and underfitting, which may be overcome with more extensive data collection. In addition, filtering outliers via data preprocessing may further improve the understanding of wind-speed distributions, which warrants further investigation. Overall, the results of this study are expected to be extended and linked to the derivation and prediction of power output from wind generation in the ROK and elsewhere.

This work was supported by a research grant from Pukyong National University (2021).