Unintentional bubbles are formed when manufacturing devices using two-dimensional materials. Usually, these bubbles affect device performance degradation, but in the case of memory devices, an additional charge trap can be expected. We investigate the direct surface potential of bubbles formed in a hexagonal boron nitride (hBN)/multilayer graphene (MLG) heterostructure. Specifically, we study the electron transfer improvement by increasing the memory window of a MoS2/hBN/MLG heterostructure in floating gate memory owing to bubbles formed at the hBN/MLG heterointerface. This characterization of bubbles containing molecules such as water or hydrocarbon in two-dimensional material heterointerfaces can promote the understanding of charge carrier tunneling in two-dimensional material heterostructures.

Floating gate memory (FGM)-based two-dimensional (2D) material heterostructures can achieve high performance and stability [1–9]. For instance, the transition-metal dichalcogenide (TMDC) semiconductor channel, hexagonal boron nitride (hBN) dielectric layer, and multilayer graphene (MLG) semimetal layer heterostructure have been demonstrated and widely used in FGM devices [1–9]. The program and erase steps in memory can be achieved by electron tunneling between the TMDC channel and MLG heterostructure through the hBN barrier. Hence, the tunneling condition of hBN in a TMDC/hBN/MLG heterostructure is important in FGM applications [1–9].

For preparing 2D material heterostructures, each layer of 2D material is stacked using micro-transfer systems in air, causing unintended residues in the stacked layer heterointerfaces [10–16]. Such residues are commonly referred to as bubbles. Previous studies on bubbles have considered their influence on tunneling [17–24], and we have previously reported the charge trap by bubble formation in a TMDC/hBN/ MLG heterointerface [9]. We observed the tunneling carrier density through the hBN area that includes bubble formation and analyzed an additional charge trapping layer for electron transfer between TMDC and MLG layers in TMDC/hBN/MLG heterostructures.

Figure 1 shows the fabrication steps of the MoS2/hBN/MLG heterostructure on a SiO2 substrate using a micro-transfer system [25–28]. A 40-nm-thick hBN dielectric layer was stacked on MLG (22 nm in thickness), which was initially prepared on a 280-nm-thick SiO2 substrate by mechanical exfoliation. Then, multilayer MoS2 (26 nm in thickness) was transferred to hBN/MLG/SiO2, as illustrated in Figs. 1(a)-(c). During transfer, we observed the formation of bubbles, as shown in Figs. 1(b) and 1(c). To verify the surface doping variation owing to bubble formation in MoS2/hBN/MLG heterostructures, we performed scanning Kelvin probe microscopy (SKPM) using a commercial atomic force microscope (XE-100; Park Systems, Suwon, Korea) in air at room temperature. To investigate the spatial surface potentials on the surface of 2D material heterostructures, we used the feedback process (measuring contact potential difference CPD) under applied AC voltage of ∼1 V, DC voltage of 0.5 V, and frequency of 17 kHz to an Aucoated probe.

Figure 2 shows the spatial distribution of the contact potential difference for the MoS2/hBN/MLG surface including bubbles. Owing to the increasing influence of bubbles at the 2D heterostructure, we chose a large bubble with 60 nm in height [Figs. 2(a) and 2(b)] for analysis. To confirm bubble doping, we evaluated the normalized contact potential (△CPD) considering a flat hBN area as reference (i.e., △CPD = 0 meV), as shown in Fig. 2(c). △CPD ≈ 200 meV at the center of bubble region [Fig. 2(d)], indicating doping variation by the formation of bubbles in hBN/MLG heterostructures. This △CPD value can be attributed to molecules trapped in bubbles at the hBN/MLG interface. The tunneled carrier density has shown enhancement through hBN from MLG to MoS2 layers in MoS2/hBN/MLG heterostructures by residues such as water or hydrocarbon (i.e., bubbles) [9]. 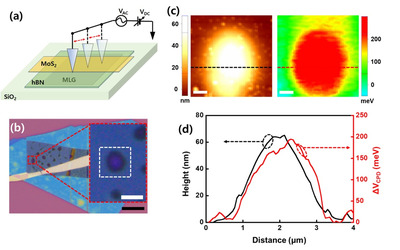 To investigate electron tunneling related to bubble formation between hBN and MLG, we connected Cr/Au (10/100 nm in thickness) electrodes to an MoS2 channel by electron-beam lithography, as shown in Fig. 3. We chose two regions covering bubble [A1 in Fig. 3(a)] and flat [A3 in Fig. 3(a)] areas on the hBN/MLG heterostructure and transferred a MoS2 layer covering both areas. Employing the electrode marked by E2 as border, the electric transport characterization was investigated by measuring the drain-source current (DS) for 12 = 0.1 V (red scheme between E1 and E2) and 23 = 0.1 V (blue scheme between E2 and E3) according to BG, as shown in Fig. 3(b). The resulting MoS2/hBN/MLG heterostructure was employed as a memory device with electron transfer between the MLG and MoS2 layers, leading to hysteresis in the transport curves for the MoS2 channel according to the forward (+) and backward (–) sweeps of BG. We considered the hysteresis as the MW [9,29]. 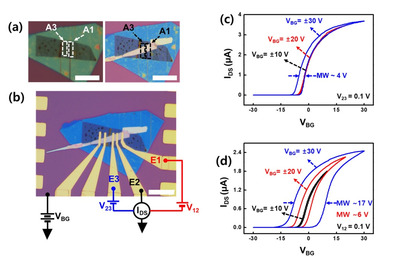 The hysteresis for transport curves (DS vs. BG for 12) on the bubble-containing MoS2 channel area [Fig. 3(d)] was larger than that (DS vs. BG for 23) on the flat area [Fig. 3(c)]. Hysteresis in the transport curve for 23 while applying forward and backward BG = ±10 - ±20 V was not observed (i.e., MW « 0.1 V) [Fig. 3(c)]. On the other hand, the opened MW for BG = ±30 V was observed with approximately 4 V. Hence, electron tunneling through hBN between the MoS2 and MLG layers began for BG larger than ±30 V. For the bubblecontaining MoS2 channel area [Fig. 3(d)], the MW was much smaller than 0.1 V for ±10 V, but the MW opened 6 V for ±20 V and 17 V for ±30 V. This indicates that tunneled electrons between MoS2 and MLG are enhanced by bubble formation between hBN and MLG. Therefore, bubble formation on the surface interface in TMDC/hBN/MLG heterostructures can allow to change the direct surface potential variation and transport characteristics by trapped charges.

We characterized the effects of bubbles formed at hBN/MLG interfaces on the electron tunneling ratio of a MoS2/hBN/MLG heterostructure. Evidence of charge trapping was obtained from direct observation by SKPM of the surface potential variation by doping changes on a bubble-containing area at the hBN/MLG heterointerface. Based on measurements of the MW enhancement for a MoS2/hBN/MLG FGM device with bubbles formed at the hBN/MLG interface, we confirmed the trapped charges by bubble formation leading to improved electron tunneling ratio between the MoS2 channel and MLG floating gate layer. This result may contribute to understanding the role of trapped molecules in bubbles formed on 2D material heterostructures for electron tunneling applications.