ZnO has been widely investigated as a material for short-wavelength optoelectronic devices because of its outstanding electronic properties, such as a wide bandgap (~3.3 eV) and large exciton binding energy (60 meV) [1–3]. Moreover, the ability to synthesize single-crystalline ZnO substrates promotes their utilization in high-performance optoelectronic devices [4,5]. ZnO has been applied in light-emitting devices, ultraviolet (UV) photodetectors, and lasers [3,6–8]. ZnO Schottky photodiodes (PDs), which are composed of junctions with several metals such as aluminum, silver, and platinum (Pt) electrodes have been used to make UV photosensors with high quantum efficiency, high response speed, low dark current, and high sensitivity [9,10]. However, because such metal electrodes have poor transparency to UV light, the device efficiency is limited. In this regard, graphene has been used as a transparent electrode for optoelectronic devices operating in the UV regime [10], leading to promising device structures, such as graphene/ZnO Schottky diodes.

To enhance UV absorption, metal nanoparticles (NPs) have been used to strengthen the UV sensing ability of ZnO-based photodetectors [11,12]. Accordingly, incident light with a suitable wavelength interacts with the metal NPs by coupling with the surface plasmons. The localized field by metal NPs can enhance the optical transition rate in semiconductors, known as the Purcell effect, and thus, light absorption can be significantly improved by the metal NPs. Therefore, the UV photoresponse of graphene/ZnO Schottky diodes can be readily increased by the appropriate choice of metal NPs. In this work, we demonstrate the enhanced UV photoresponse of a graphene/ZnO Schottky diode with Pt NPs. The Pt NPs were self-assembled on the graphene layer by a thermal annealing process.

Semi-metallic few-layer graphene was synthesized on a Ni/SiO2/Si substrate by Ni-catalytic chemical vapor deposition using a CH4, H2, and Ar gas mixture at 1,000 °C [13,14]. After coating the few-layer graphene on the Ni film with a poly(methylmethacrylate) (PMMA) supporting layer, the Ni layer was selectively etched in an aqueous iron chloride solution. Using the PMMA-assisted wet transfer method [14], few-layer graphene was transferred onto a Ga-doped ZnO (ZnO: Ga) 1 × 1 cm2 bulk substrate. The electron mobility and concentration in the ZnO substrate measured by Hall measurements were 56.3 cm2/V·s and 6.13 × 1018 cm−3, respectively. To form Pt NPs on the graphene layer, 1-nm-thick Pt thin films were deposited by e-beam evaporation. Rapid thermal annealing (RTA) was then performed at 500 °C for 1 min. To enable the measurement of the electrical properties of the graphene/ZnO Schottky diodes with Pt NPs as the top electrode, a 100-nm-thick Au film on the graphene layer was selectively deposited by e-beam evaporation using a shadow mask with an open area of 1 × 1 mm2. Finally, Ti (20 nm)/Au (80 nm) was deposited on the bottom of the ZnO:Ga layer to form an ohmic contact with the ZnO:Ga layer.

The devicestructure of graphene/ZnO Schottky diodes with Pt NPs is schematically illustrated in Fig. 1(a). Before fabricating the device, the morphology of the Pt NPs was optimized by a preliminary process, including the formation of Pt NPs on the graphene/quartz substrate. The formation and morphology of Pt NPs on the graphene layer were observed in the scanning electron microscopy (SEM) images of the graphene layer without Fig. 1(b) and with Fig. 1(c) Pt NPs. After optimization, RTA was used toform Pt NPs on the graphene/ZnO:Ga heterostructures, also confirmed via SEM. Figure 1(d) shows the Raman spectra of graphene/ZnO:Ga with and without Pt NPs, exhibiting E2 (435 cm−1) and E1-2LO (1,158 cm−1) modes from ZnO, as well as graphene-related characteristic peaks at D (1,350 cm−1), G (1,580 cm−1), and 2D (2,700 cm−1) [15]. The Raman features of graphene/ ZnO:Ga with and without Pt NPs were quite similar, indicating that the crystal structures of both ZnO and graphene were not significantly modified by the formation process of the Pt NPs. In addition, the coexistence of both ZnO- and graphene-related Raman peaks indicated that the graphene layer was successfully transferred onto the ZnO:Ga substrate. 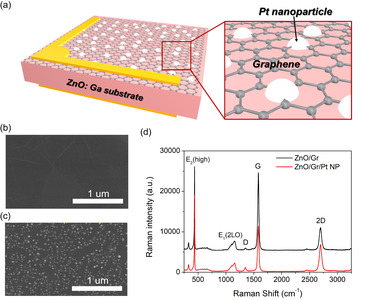 Figure 2 shows the UV-visible absorption spectra of the bare graphene and Pt NP-decorated graphene layers on a quartz substrate. In Fig. 2(a), the dominant peak at 270 nm, which is related to the π − π* transition of the aromatic c-c ring [16], is observed in both samples, regardless of the presence of Pt NPs. In addition, because the transmittance in the visible region is above approximately 70 %, the number of layers can be estimated to be 11–13 by using 2.3 % transmittance per 1 L layer (thickness: 0.335 nm), resulting in a thickness of less than 4 nm. After the deposition of Pt NPs, the transmittance of the graphene layer in the visible region slightly decreased by 3–4 % [14], mainly due to the free carrier absorption effect of the Pt NPs. For comparison, the absorption spectrum of the ZnO substrate was plotted with that of the graphene layers, showing that the absorption edge, which corresponds to the bandgap of ZnO, lies in the UV regime at a wavelength of 387 nm (~3.2 eV). To understand the plasmonic resonance behavior of the graphene layer with Pt NPs, the enhancement ratio was estimated from the absorption spectra using the relation of with − wo/wo, where with and wo are the absorbances of the Pt NP-decorated and bare graphene layers, respectively. A broad absorption enhancement was observed from the UV to the visible region, which is consistent with the localized plasmonic resonance feature of metal NPs [17]. As mentioned in the experimental methods, the formation process of Pt NPs, such as the thickness control of the Pt thin film and post-annealing process, was optimized to match the largest enhancement ratio with the ZnO absorption edge, with the intention of increasing the photocurrent in ZnO/graphene Schottky diodes. 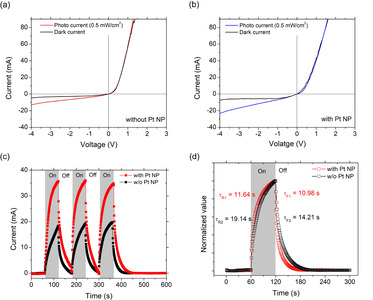 where ΦB is the Schottky barrier height, s is the saturation current, is the area of the ZnO/graphene Schottky diode, * is the effective Richardson constant, is the electron elementary charge, is the Boltzmann constant, and is the temperature [10]. First, from the dark curves under forwarding bias, the saturation current value was obtained from the linear-fitting procedure of the log I vs. voltage plots. Using the device area and * of 32 A · cm−2 · K−2 for the effective Richardson constant of ZnO [10,18], the Schottky barrier heights of the ZnO/graphene junction with and without Pt NPs were estimated to be 0.406 and 0.407 eV, respectively. This result indicates that the Pt NP formed on the graphene layer did not have a significant effect on the barrier height in the graphene/ZnO diode. In addition, the curves of the graphene/ZnO Schottky diodes show that the photocurrent was generated under a reverse bias (negative bias applied to the top electrode on the graphene layer). To investigate the increase in the photocurrent in the graphene/ZnO diode with Pt NPs, the timedependent photocurrent was measured at a bias of –2 V for on/off illumination cycles of 60 s. As shown in Fig. 3(c), the photocurrents immediately switched from an ‘off ’ state to an ‘on’ state, and then, their responses for on/off switching were consistently reproduced. Importantly, the photocurrent of the graphene/ZnO diode with Pt NPs was significantly improved by a factor of approximately 1.7, indicating that photocurrent generation in the graphene/ZnO diode was strongly affected by the plasmonic resonance of the Pt NP. Figure 3(d) shows the current transient of the graphene/ZnO diodes under UV illumination and relaxation for one off–off cycle. The rise (, ) and fall (, ) times depending on the presence of Pt NPs were estimated by exponential fitting of the time trend. As shown in Fig. 3(d), the (= 11.64 s) and (= 10.98 s) of the diode with Pt NPs were much shorter than the (= 19.14 s) and (= 14.21 s) of the diode without Pt NPs, suggesting that the UV photoresponse time can be greatly improved by introducing Pt NPs onto the graphene/ZnO Schottky diode. 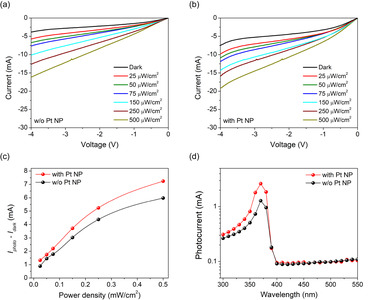 In summary, we demonstrated that the UV photoresponseof graphene/ ZnO PDs can be enhanced by introducing Pt NPs onto the graphene layer. Pt NPs can be directly formed on the graphene layer by postthermal treatment. In addition, the response time of the graphene/ZnO Schottky PDs with Pt NPs was faster than that without Pt NPs. Accordingly, the photocurrent generation and UV sensitivity of the graphene/ ZnO Schottky PDs are greatly enhanced by the plasmonic scattering effect of the Pt NPs. These results indicate that the UV photoresponse in graphene/ZnO-based heterostructures can be increased by utilizing a composite structure composed of Pt NPs and a graphene layer.

This work was supported by the Basic Science Research Program (No. 2022R1C1C1004981) through the National Research Foundation of Korea, and by a grant (00144108) funded by the Ministry of Trade, Industry, and Energy of the Korean government.

The authors declare no conflict of interest.