In general, a chamber wall is grounded for safety when experimenting with radio frequency (RF) power [1–4]. However, although the exterior wall of the chamber is grounded, the RF current does not flow along the ground line. This is because the area of the current loop formed between the coaxial cable and the chamber is smaller than that made with the ground line [5]. Thus, the current flows toward a smaller impedance, and the smaller the area, the smaller the impedance of the formed closed loop. Consequently, the current does not flow to the ground line but returns through the coaxial line shield. Therefore, grounding the chamber wall is necessary only for safety reasons.

A high-frequency time-domain solver provided by CST Microwave Suite (Dassault Systèmes, France) was used to analyze the effect of the grounding chamber wall. The software can calculate simulation models, including surface current and electromagnetic field, in the range of 0 to several GHz by solving the Maxwell equation in a threedimensional space. In this simulation, the profile of the surface current and electromagnetic field and the voltage values for each position of the coaxial cable shield at 13.56 MHz were obtained.

Figure 1(a) shows the chamber and solenoid configurations in our simulation, where the diameter and height of the chamber are 40 mm and 19 mm, respectively. Moreover, the diameter and number of turns of the solenoid are 30 mm and 5, respectively. The distance between the electrodes inside the chamber is 20 mm, and plasma with a sheath thickness of 0.234 mm is between the electrodes. The plasma is assumed to be a dispersive dielectric material in the Drude model [7]. In the simulations, the density of the plasma was 1011 cm−3, and the pressure was 10 Torr. Figure 1(b) shows the boundary conditions for the simulation. In particular, the simulation condition was divided into two types: one, where the bottom of the coaxial cable under the chamber was grounded, and in the other, it was opened. Thus, the boundary conditions of the simulation were set to the ground only on the top and bottom surfaces, and the other surfaces were set to open space. 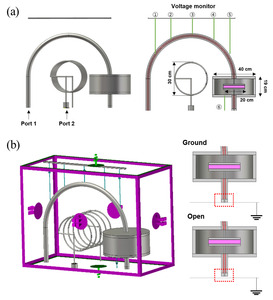 In a high-frequency circuit, the current flows along a path with low impedance (Z), particularly reactance (X). This is because the higher the frequency, the greater the effect of reactance. The impedance and reactance equation is as follows:


Where is the resistance, is the inductance, and is the capac- itance, respectively. The second term on the right side represents a reactance equation. The equation shows that the reactance increases as increases and decreases. Thus, when the other riables are constant, the current flows toward a smaller . 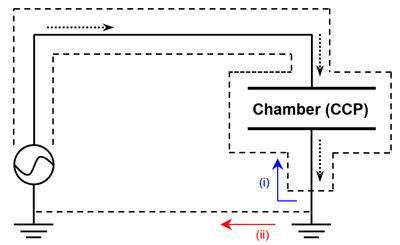 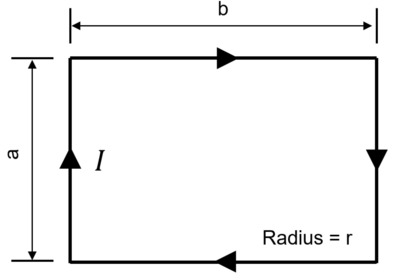 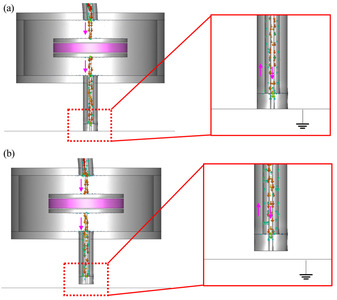 Figure 4. Current path when the power is applied to Port 1. (a) Ground condition. (b) Open condition.

Figure 5. Simulation results when power is applied to Port 2 in ground condition. (a) Current path. (b) Magnetic field vector.

Figures 6(a) and 6(b) show the surface current and magnetic field vector of the open condition, respectively. In the open condition, a current path appeared in the direction opposite to that of the ground condition. This is because the circuit is disconnected in the open condition, unlike the ground condition, where a coaxial line forms a closed loop that picks up the magnetic gradient flux with a ground line. In a disconnected circuit, an electromotive force is induced to interrupt the increasing magnetic flux inside the solenoid, and a current path is generated by the voltage difference caused by the electromotive force [8– 10]. We obtained a voltage waveform for each location of the coaxial cable shield using the voltage monitoring function to confirm whether the current flowing along the coaxial cable was due to the electromotive force. Figure 7(a) shows one period of the voltage waveform of the voltage monitors shown in Fig. 1(b). As shown in Fig. 7(a), the amplitude of the voltage increases as the distance from the ground increases. This can be observed as the voltage swinging up and down along the coaxial cable with respect to the ground, as shown in Fig. 7(b). This result shows that when the bottom of the chamber is opened, a voltage difference occurs from the port to the bottom due to the electromotive force. In the open condition, the result differs from the current direction of the short because the current flowing due to this voltage difference appears.

Figure 6. Simulation results when power is applied to Port 2 in open condition. (a) Current path. (b) Magnetic field vector.

Figure 7. (a) Results of the voltage monitoring. (b) Voltage graph by the position of the coaxial cable shield.

This research was supported by a research fund from Chungnam National University in 2022.