Effect of Mo Vacancy on the Photoresponse of Bilayer MoS2 Film

Photodetectors that can detect light over a broad spectral range have attracted significant attention. Recently, molybdenum disulfide (MoS2), a known transition metal dichalcogenide, is considered a good photodetector material. In this study, MoS2 film was prepared by metal-organic chemical vapor deposition (MOCVD) on an SiO2/Si substrate. The effect of Mo vacancies on the structural, electrical, and optical properties of MoS2 films was analyzed. Results show that the synthesized MoS2-based phototransistor exhibits a photoresponsivity as high as 125 A/W at 0.02 mW power density of the 850 nm laser at room temperature (300 K). The Mo vacancies were confirmed in the MoS2 bilayer through XPS measurements. MOCVD-grown bilayer MoS2-based phototransistors with Mo vacancies allowed the detection of a wider wavelength range of 400–1150 nm. Thus, introducing Mo vacancies improved the optoelectronic properties of MoS2 phototransistors.

Photodetectors based on two-dimensional (2D) materials, such as graphene, have attracted significant attention in recent years. Many advantages of 2D-based photodetectors have been reported, including high photoresponsivity, fast photoresponse, wideband detection, and sensitive photodetection, owing to their unique electronic and optoelectronic properties. Graphene with intrinsic zero-bandgap energy exhibits a large amount of dark current and a low absorption coefficient, which leads to a very low photoresponsivity [1,2]. Unlike graphene, transition metal dichalcogenides (TMDs) such as molybdenum disulfide (MoS2) are suitable for photodetectors due to their bandgap of 1.0–2.0 eV, which covers the visible to the near-infrared range [3]. Moreover, the band structures of MoS2 and other TMDs depend on the thickness of the film material [4]. Because the geometrical, electronic, magnetic, and optical properties are strongly influenced by molybdenum (Mo) and sulfur (S) vacancies, the MoS2 bandgap can be engineered by vacancies, as well [5]. Generally, the detection range of a photodetector is determined by the bandgap of the semiconductor used. Defect-induced MoS2 allows to detect a longer wavelength (i.e., mid- and far-infrared) owing to the narrow forbidden gap of MoS2 [6,7]. In this study, MoS2-based phototransistors with Molybdenum (Mo) vacancies were synthesized using metal-organic chemical vapor deposition (MOVCD) on SiO2/Si substrate and its optoelectronic properties were measured and analyzed.

Bilayer MoS2 films were deposited on a -doped silicon substrate with a 300 nm thick SiO2 layer, using MOCVD with a reactor pressure of 10 Torr and a growth temperature of 400 °C. After cleaning the substrate with isopropyl alcohol, acetone, and deionized water, it was placed in the vacuum chamber. Molybdenum hexacarbonyl and hydrogen sulfide were used as the sources of molybdenum and sulfur, respectively. X-ray photoelectron spectroscopy (XPS) (Nexsa XPS system, Thermo Fisher Scientific) was used to measure the binding energies of Mo and S in the bilayer MoS2 films. XPS was performed with a monochromatic Al Kα source under high vacuum (2.0 × 10−7 Torr). Raman spectra were recorded using a Raman microscope (ARAMIS, Horiba Jobin Yvon) equipped with a 514 nm laser that induces excitation with a spot size of 0.7 µm and a laser power of 8 mW. An MoS2-based phototransistor was fabricated by depositing Ti/Au (5/50 nm) electrodes on an MoS2 film on an SiO2/Si substrate using an ebeam evaporator. All optoelectrical measurements were performed under vacuum conditions (10−3 Torr) using a four-point probe station (M6VC, MS-tech) with a commercial parameter analyzer (2636 B, Keithley Inc.). A monochromator (CS130, Newport) was used to select the wavelength using a xenon lamp (300 W) as the light source. An optical power meter (1936-R, Newport), an Si detector (10UVSI, ICC), and a Ge detector (71SI00422, Newport) were used to measure the light power density. Si and Ge detectors were used to cover the wavelength range from 400 to 1,100 nm and from 800 to 1,700 nm, respectively.

Figure 1(a) shows the Raman spectra of the bilayer MoS2 films deposited by MOCVD. The two dominant Raman peaks are observed at an in-plane E vibrational mode (383.52 cm−1) and an out-of-plane A vibrational mode (404.44 cm−1). The frequency difference between A and E can be used to confirm the thickness of the MoS2 films. The difference between the E and A modes was approximately 21 cm−1, corresponding to bilayer MoS2 [8]. XPS measurements revealed the elemental composition and chemical state of the bilayer MoS2 films. The three peaks that are shown in Fig. 1(b) are observed at 226.18, 228.68, and 231.98 eV corresponding to S 2, Mo 35/2, and Mo 33/2 respectively, which are the characteristic peaks of MoS2. Figure 1(c) shows the two peaks corresponding to S 23/2 and S 21/2 at 161.58 and 162.88 eV, respectively. In addition, we can investigate the atomic percentages of Mo and S using XPS. The atomic ratio of Mo to S derived from XPS was approximately 2.42.

Figures 2(a) and 2(b) show the optical microscopy (OM) and schematic images of the bilayer MoS2-based phototransistor fabricated by MOCVD, respectively. To measure the electrical properties, Ti/Au electrodes were deposited on both sides as drain and source. The width and length of the MoS2 channel were 1,500 and 85 µm, respectively. The effective area of the MoS2 photodetector was 8.46 × 10−4 cm2. The ds–ds curves of the bilayer MoS2-based phototransistor at room temperature (300 K) and low temperature (80 K) are shown in Figs. 3(a) and 3(b). The curves are nonlinear, indicating Schottky contact between Ti/Au (5/50 nm) and MoS2, and appear in the dark and under illumination at 900 nm. The photocurrent, ph (ph = illumination – dark), was measured under near-infrared (NIR) light (900 nm). Photoresponsivity (R) is an important parameter that indicates the performance of a MoS2-based phototransistor and can be calculated using the following equation:

Figure 2. (a) Optical image and (b) Schematic image of bilayer MoS2-based phototransistor.

where light is the light power density and is the effective area of the MoS2 channel.

Figures 4(a)–(d) show the calculated R at 300 K and 80 K, which is illuminated by light in the wavelength range from 400–1,300 nm. The photoresponse occurs owing to the generation of electron-hole pairs when the device is exposed to incident light having higher energy than the bandgap of MoS2. Therefore, the cutoff wavelength of the wavelength-dependent photoresponsivity graph is related to the bandgap of MoS2 [9,10]. Photodetectors fabricated using bilayer MoS2 show a photoresponse beyond the cutoff wavelength of ~780 nm, corresponding to a photon energy of ~1.6 eV [4]. Meanwhile, our MoS2- based phototransistor detected up to 1150 nm, and the photoresponsivity obtained at a drain voltage of 30 V reached 125 A/W at 850 nm at room temperature. The reason that our bilayer MoS2-based phototransistor can detect a wider wavelength than typical bilayer MoS2 devices is the presence of Mo vacancies, as confirmed by XPS measurements. Further study including transmission electron microscope, Rutherford backscattering spectrometry, and deep level transient spectroscopy analysis will be necessary to fully understand the effect of Mo vacancy on optoelectronic properties of MoS2. As the Mo vacancy exists, several defect energy levels emerged in the forbidden gap region [6,11]. In Figs. 4(b) and 4(d), we observed a blue shift in the cutoff wavelength corresponding to the change in bandgap when the temperature was decreased. This is caused by the thermal expansion of the crystal lattice in many semiconductors [12]. As the temperature decreases, defect levels can be easily identified because thermal motion is suppressed [13]. The peak located at 1,050 nm in Fig. 4(d) is related to the Mo vacancy defect level. To verify the change in the photoresponsivity of the MoS2-based phototransistor with the drain bias, we applied a drain voltage of 1–30 V. When the drain voltage was increased, the photoresponsivity at a wavelength of 850 nm increased from 0.5−125 A/W at room temperature (300 K), and from 9–1,453 A/W at low temperature (80 K). This result was due to the larger drain voltage at which the photogenerated carriers can be easily transferred to the electrode or obstruct photogenerated carriers from recombination [14]. In addition, as the temperature decreased, the photoresponsivity increased owing to the increase in the carrier lifetime and mobility at low temperatures [15]. 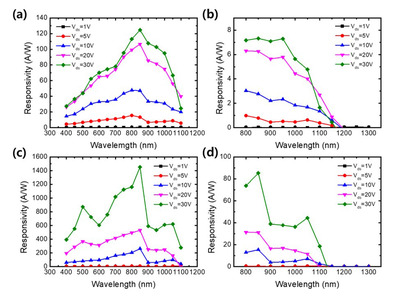 In Fig. 5, the transfer characteristic curve (ds-g) of the bilayer MoS2-based phototransistor under 5.1 mW/cm2 white light power density with fixed ds = 10 V exhibited typical -type semiconductor transfer properties. As the back gate (g) increased, the contact barrier decreased, and the injection and collection of carriers were facilitated, thereby increasing the photocurrent [16]. Moreover, the mobility (µ) of the illuminated MoS2-based phototransistor improved from 3.99 × 10−4 to 1.43 × 10−3 cm2/V⋅s, which was calculated using the following equation: 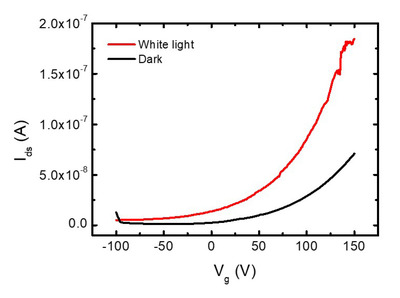 where is the transconductance, channel = 50 µm is the channel length, channel = 1,400 µm is the width, and g is the gate capacitance per unit area.

A bilayer MoS2-based phototransistor was fabricated using MOCVD on a SiO2/Si substrate to measure its optoelectronic properties. The Mo vacancies were confirmed by investigating the atomic percentages of Mo and S in the bilayer MoS2 film by XPS measurements. The MoS2-based phototransistor produced can detect a relatively wide wavelength of 400–1,150 nm at room temperature. We extracted a photoresponsivity of 125 A/W at 850 nm without applying a gate voltage and improved the mobility up to 1.43 × 10−3 cm2/V⋅s by illumination under white light. When forbidden gap tuning is developed, such as adjusting the ratio of vacancies, MoS2 will be suitable for optoelectronic devices for use in detection in the infrared range.