As perovskite solar cells (PSCs) are composed of multilayer structures, the formation of an appropriate interface between the perovskite lightabsorbing layer and charge transport layer is necessary to achieve a high power conversion efficiency (PCE). [6,6]-phenyl C61 butyric acid methyl ester (PCBM) is a popular organic material for the electron transport layer (ETL) in PSCs owing to its solution processability and excellent n-type properties. However, the annealing effects of the PCBM ETL on PSC performance are not adequately understood. Therefore, we fabricated p-i-n structured PSCs with annealed and unannealed PCBM ETL, and their device performances were compared. The PCE of the PSCs was markedly increased by annealing of the PCBM. The improved device performance resulted from the (1) enhanced electron transport ability of PCBM and (2) reduced non-radiative recombination at the interface between the perovskite and PCBM. These results show that annealing of PCBM is an efficient method to attain a high PCE of PSCs.

Recently, perovskitesolar cells (PSCs) have been extensively studied owing to their high light absorbance, tunable band gap, and low fabrication cost [1–4]. Since the first report of solid-state devices in 2009, the power conversion efficiency (PCE) of PSCs has increased dramatically [5,6]. In particular, the PCE of PSCs can be significantly improved by adopting a multilayer structure. The basic structure of PSCs consists of a cathode, an electron transport layer (ETL), a perovskite light-absorbing layer, a hole transport layer (HTL), and an anode. The ETL/HTL facilitates electron/hole transport toward the cathode and anode, respectively, after the dissociation of the photogenerated exciton. For efficient electron/hole transport in devices, the proper formation of an interface between the perovskite layer and ETL/HTL is essential. This implies that the interface should have wellaligned charge transport levels, absence of pinholes, and high wettability [7–9]. Such a multilayer structure is a universal strategy applied in various emerging optoelectronic devices including organic lightemitting diodes, organic solar cells (OSCs), and quantum-dot lightemitting diodes [10–12].

Various organic and inorganic materials have been employed as ETL and HTL to achieve efficient PSCs [13–16]. Among them, [6,6]-phenyl C61 butyric acid methyl ester (PCBM) is a representative organic ETL because of its excellent -type properties and role in passivating the defects in perovskites [17]. In addition, the PCBM ETL can be deposited via a solution process at low temperatures, which is advantageous for fabricating low-cost and flexible devices. Thermal annealing of solution-processed organic films is frequently performed to remove the solvent residue and increase the film crystallinity. For example, in the case of bulk heterojunction OSCs, annealing the organic light-absorbing layer increases the PCE significantly [18]. This implies that the annealing of the PCBM ETL alters its optoelectronic properties, thereby affecting the PCE of PSCs. However, the annealing effects of PCBM ETL on the device performance of PSCs have not been sufficiently explored. By understanding the changes in the device performance caused by PCBM annealing, a strategy necessary to build a PSC architecture with superior efficiency can be developed.

In this study, we compared the device performance of structured PSCs employing annealed and unannealed PCBM ETL. The impact of PCBM annealing on the electron transport ability was investigated using PSC and electron-only device results. In addition, the exciton and carrier dynamics at the perovskite/PCBM interface were analyzed via photoluminescence (PL) measurements. The improved PCE of PSCs because of PCBM annealing is discussed in terms of the electron transport and interface recombination.

Figure 1(a) shows the device structure of the fabricated PSCs and chemical structure of PCBM. In the current study, we assumed that annealing after PCBM ETL deposition primarily influenced the PCBM, whereas the underlying layers were hardly affected. Figure 1(b) shows the measured characteristics of the representative PSCs under 1 sun illumination. The solar-cell parameters obtained from the five devices are summarized in Table I.

Table 1 . Solar cell parameters of PSCs without and with annealing. Statistics were evaluated from five devices.. 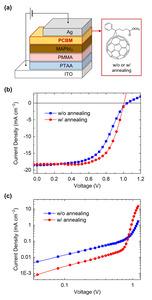 Figure 1. (a) Device structure of PSCs and chemical structure of PCBM. characteristics of representative PSCs without and with annealing (b) upon 1 sun illumination and (c) in dark conditions.

The device performance was evaluated using a reverse-direction bias sweep. Without annealing, the short-circuit current density (), open-circuit voltage (), and fill factor (FF) were 18.55 mA cm−2, 1044.4 mV, and 54.3 %, respectively, yielding a PCE of 10.52 %. However, the device performance was significantly improved with annealing. The , , FF, and PCE of the PSCs with annealed PCBM were 18.28 mA cm−2, 1008.4 mV, 65.10 %, and 12.01 %, respectively. Although and did not exhibit significant changes, FF improved remarkably with annealing. In addition, an S-shaped kink was observed near the without annealing. Such an S-shaped kink might be attributed to the charge accumulation occurring at the interface owing to inefficient charge transport. However, after annealing, Sshaped kinks were eliminated. This implies enhanced electron transport in PSCs with annealed PCBM. To further study the charge transport characteristics, curves of the PSCs were measured under dark conditions, as shown in Fig. 1(c). In the low-bias regime, of the PSC without annealing was higher than that with annealing. The current in the low-bias regime might be related to the leakage current owing to the defect states at the interface, which is detrimental to solar cell performance [23]. Conversely, in the high-bias regime, of the PSC with annealing was higher than that without annealing. This might be due to the improvement in the bulk charge transport by annealing.

The changes in the electron transport properties with PCBM annealing were additionally studied by characterizing the electron-only devices. Figure 2 shows the curves of the fabricated electron-only devices and the schematic device structure. The PTAA/PMMA layers in the PSCs were replaced with a SnO2 ETL for electron-selective contact. The positive bias regime refers to the direction of the electron current from the ITO to the Ag electrodes, whereas the negative bias regime refers to the opposite. In all bias regimes, J of the annealed device was higher than that of the unannealed device, agreeing well with the characteristics of the PSCs under dark conditions. This result clearly shows enhanced electron transport with PCBM annealing. Based on the electrical measurements of the PSCs and electron-only devices, it can be concluded that one of the reasons why the PCE of the PSCs was improved by annealing is the superior electron transport ability. 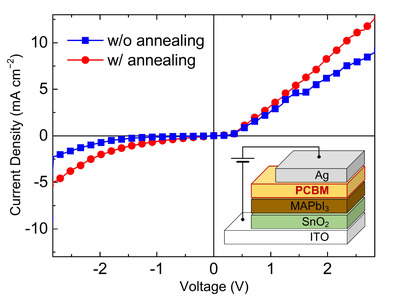 To study the morphological changes of the PCBM ETL by annealing, top-view and cross-sectional-view SEM images of the ITO/PTAA/ PMMA/MAPbI3/PCBM sample were obtained, as shown in Fig. 3. Figures 3(a) and 3(b) show the cross-sectional SEM images of the samples with and without annealing. The PTAA and PMMA layers on the ITO were very thin and thus not clearly observable. In the MAPbI3 layer, large perovskite crystals without pinholes were observed due to the enhanced wettability of PMMA. The thickness of the MAPbI3 layer was estimated to be approximately 360 nm in both the cases. In both the cases, The PCBM ETL was uniformly deposited on the MAPbI3 layer. The thickness of the annealed PCBM ETL is 70 nm, whereas that of the unannealed PCBM ETL is 75 nm. This might be attributed to the dense packing of the PCBM molecules by annealing. Figures 3(c) and 3(d) show the top-view SEM images of the samples. In both the cases, PCBM clusters were observed. However, no noticeable changes were observed during the annealing. Therefore, changes in the morphology of the samples after annealing were not noticeable, except for a slight difference in the thickness of the PCBM layer. 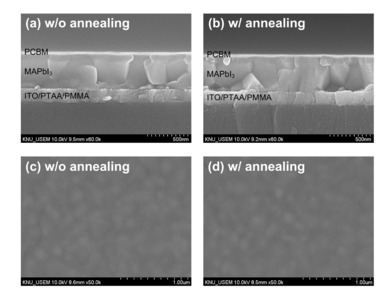 Figure 3. Cross-sectional-view and top-view SEM images of ITO/PTAA/PMMA/ MAPbI3/PCBM (a), (c) without annealing and (b), (d) with annealing. 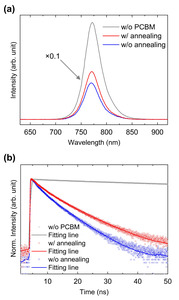 Figure 4. (a) SSPL and (b) TRPL spectra of glass/MAPbI3 and glass/MAPbI3/PCBM without and with annealing. Fitting lines include bi-exponential decay function and instrumental response function.


The fitting parameters are presented in Table II. Without the PCBM ETL, the PL decay was ascribed primarily to radiative recombination (~ 95 %). Consequently, τavg was as high as 137.01 ns. However, with the PCBM ETL, considerable non-radiative decay was observed. This fast decay is resulted from electron transport and interface defect trapping phenomena. For the unannealed PCBM, the evaluated A1, τ1, A2, and τ2 were 38.40, 2.05 ns, 61.60, and 5.08 ns, respectively. The resultant τavg was 4.47 ns. However, in the case of the annealed PCBM, the fast decay component decreased; the A1, τ1, A2, and τ2 were 35.29, 2.73 ns, 64.71, and 6.95 ns, respectively, yielding a τavg of 6.21 ns. This result is in good agreement with the changes observed in the SSPL spectra. When considering the PL results together with the device results, it can be concluded that the increased τavg originates from the reduced interface defects. The passivation of interfacial defects plays a decisive role in increasing the PCE of PSCs [24,25]. Therefore, the reduction in defect trapping between MAPbI3 and PCBM is also a cause of the enhanced PCE with annealing.

In this study, we investigated the changes in the device performance of PSCs by annealing the PCBM ETL. The annealing process resulted in a conspicuous increase in PCE from 10.52 to 12.01 %. In particular, the FF increased from 54.3 to 65.1 %, and the S-shaped kink was removed. The characteristics of PSCs under dark conditions and electron-only devices showed an enhanced device performance, which is attributed to the improved electron transport ability because of annealing. In addition, the PL analysis showed that annealing eliminates interface defects that induce unwanted non-radiative recombination. Therefore, PCBM annealing is an effective process to achieve high-efficiency PSCs.