Combining different cations is a suitable strategy to improve the efficiency and stability of organic-inorganic halide perovskite-based solar cells. In this study, we fabricated and characterized MAPbI3 perovskite films and solar cells containing guanidinium (GA). X-ray diffraction measurements confirmed that partial substitution of GA cations was successfully performed through a solution process. Substitution of a small amount of GA improved the optical properties along with the reduction of defects in the perovskite film. As a result, all photovoltaic parameters were enhanced to achieve a power conversion efficiency of up to 17.23 %. However, excessive GA substitution causes aggregation of low-dimensional GAPbI3, thereby impairing device properties.

Organic-inorganic halide perovskites have recorded unprecedented progress since methylammonium lead triiodide (MAPbI3) was used as a light absorber by the Miyasaka group in 2009 [1]. It has recently become a promising candidate for next-generation solar cells with efficiencies exceeding 25 % [2]. It has been reported that the durability problem of MA-based perovskite solar cells (PSCs) is mainly caused by the decomposition of perovskite crystals due to methylammonium (MA) desorption [3,4]. An empirical index called Goldschmidt’s tolerance factor is commonly used to estimate the structural stability of perovskite crystals. If the tolerance factor is 1, the perovskite crystal has an ideal cubic structure [5,6]. Among the various approaches to meet these conditions, mixed-cation halide perovskites were considered for high efficiency and improved photoelectric properties. In this regard, inorganic substances, such as cesium [7,8] and rubidium [9], and organic substances, such as formamidinium [10–12], ethylammonium [13], and guanidinium (GA) were selected as candidates. In particular, it was reported that substituting MA with the larger GA cation could inhibit MA desorption, thereby improving performance and long-term stability [14–16].

Here, we report the effect of substituting some MA cations in MAPbI3 with GA for the PSCs. The mixed-cation perovskite GAxMA1-xPbI3 was fabricated with various molar ratios of GA and MA while maintaining the total concentration of the perovskite precursor solution. X-ray diffraction (XRD) analysis confirmed the successful cation substitution via the solution process. A morphological analysis of the mixed-cation perovskite film was performed using a scanning electron microscope (SEM). An optical analysis was performed via ultraviolet-visible (UV-vis), photoluminescence (PL), and time-resolved PL (TRPL) spectroscopy. In addition, the effect on PSCs by GA substitution was investigated through light-induced current density–voltage (J–V) characteristics.

Tin-doped indium-oxide (ITO) substrates were ultrasonically cleaned in isopropyl alcohol and acetone for 15 min and, subsequently, UV-ozone-treated for 15 min. A 15 % SnO2 aqueous dispersion was diluted to 7.5 % by adding an equal volume of deionized water. The diluted solution was spin-coated on the cleaned ITO substrate at 3,000 rpm for 30 s and then annealed at 150 °C for 30 min. To substitute some MA cations with GA cations in MAPbI3, GAI was mixed with MAI at molar ratios of 5, 10, 15, and 25 %, while maintaining the total concentration at 1.49 M. The mixture, supplemented with PbI2, was then dissolved in N, N-dimethylformamide and dimethyl sulfoxide to prepare a GAxMA1-xPbI3 perovskite precursor solution. The fabrication process and characterization of the films and solar cell devices, including the subsequent perovskite spin-coating process, follow the same steps as in our previously reported work [17,18].

Figure 1(a) shows XRD patterns of the GAxMA1-xPbI3 perovskite films. The diffraction pattern of the 0 %-GAI (MAPbI3) sample, exhibiting a strong peak at around 14.00 ° corresponding to the (110) plane, is consistent with a previously reported diffraction pattern of the typical MAPbI3 tetragonal phase [19]. Substituting GA cations up to a concentration of 25 % yields a gradual decrease from 14.00 ° (0 %) to 13.90 ° (25 %) in the (110)-plane diffraction angle and manifests as a broadening of the peaks. This reduction in the diffraction angle is due to the GA having a larger ionic radius than the MA, indicating that the GA was successfully substituted at MA sites [20]. A more detailed view of the lower angle is shown in Fig. 1(b). The diffraction intensity of the (110) plane in the 5 %-GAI sample was the strongest and gradually decreased with increasing GAI. Interestingly, the diffraction peak at 11.01 ° was generated in samples with more than 15 % of GA. In the case of excessive doping or substitution of GA, this peak differs from that of one-dimensional (1D) GAPbI3, which was reported to appear at 11.31 ° [21,22]. Additional high-concentration samples (30 and 50 %) were investigated. It was confirmed that the (110) plane peak appeared at 14.12 °, which was higher than the pure MAPbI3 peak, with a 1D GAPbI3 peak appearing at 11.31 °. This suggests that concentrations above 25 % of GA induce a phase separation between 1D GAPbI3 and MAPbI3, which causes the MAPbI3 crystal to experience additional structural distortion. 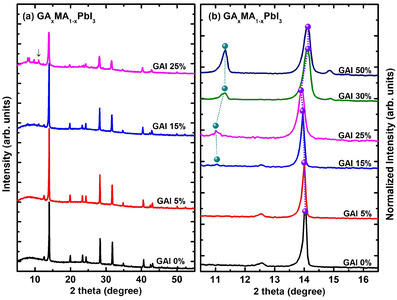 Figure 1. (a) XRD patterns of the perovskite solar cells. (b) Enlarged view of XRD peaks at (110) plane.

SEM was used to observe the morphological effects of the GA substitution on the perovskite films. The 5 %-GA sample, shown in Figs. 2(b) and 2(f), exhibits a morphology similar to that of pure MAPbI3. However, in the samples with more than 15 % GA, not only the grains that were separated into two or three changed to a vertical column shape but also relatively large grains were present, as shown in Figs. 2(c), 2(d), 2(g), and 2(h). This differs from the previously reported phase separation in 1D GAPbI3 with a rod-like shape [23]. Compared with the results of XRD in Fig. 1, the excessive substitution of GA in our experiments could be considered a partial aggregation of low-dimensional GAPbI3.

The UV-visabsorbance spectra are shown in Fig. 3(a), for different concentrations of GAI. When the concentration is increased up to 15 %, the overall absorbance increases in the absorption region, and thereafter, it decreases at the concentration of 25 %. As seen from the XRD patterns and SEM images, the increase is due to an improvement of crystallinity because of the reduction of grain boundaries due to the transformation to the vertical columnar shape of the grain. The decrease in absorbance at 25 % is because of the formation of aggregated low-dimensional (ALD) GAPbI3. Similarly, the room temperature PL spectra shown in Fig. 3(b) exhibit the same trend. The gradual shift of the diffraction peaks to smaller angles, seen in the XRD results, leads to the bandgap broadening in addition to the unit-cell volume expansion. Typically, this result leads to a blueshift of the PL peak position [24]. However, the PL peak position in Fig. 3(c) shows a redshift for GAI concentrations of up to 15 % despite bandgap broadening. This is due to the higher structural stability of GA+ with a more delocalized charge than in MA+ because of the tri-equivalent NH2 of GA+ and the structural distortion caused by the substitution of GA+ with a large ionic radius for the MA+ vacancy normally present in MAPbI3 crystals [25]. In other words, the abnormal redshift of the PL peak position could be considered as compensation for the surface defect caused by the increased GA substitution. The TRPL decay curves shown in Fig. 3(d) exhibit slower decay with increasing GAI concentration. The decay was fitted with a biexponential function and separated into a fast and slow decay components, as summarized in Table I [26]. It is noted that the fast (τ1) and slow (τ2) PL decay times are attributed to defect-related recombination and band-to-band recombination, respectively [27]. In particular, τ1 gradually increased from 37.8 ns (GAI 0 %) to 80.4 ns (GAI 15 %), showing the effect of defect reduction due to GA substitution. The 25 %-GAI sample exhibited the longest PL decay time but a weak PL intensity, and shorter τ1 than for the 5 %-GAI sample, which could be attributed to the predominance of non-radiative recombination due to ALD GAPbI3. 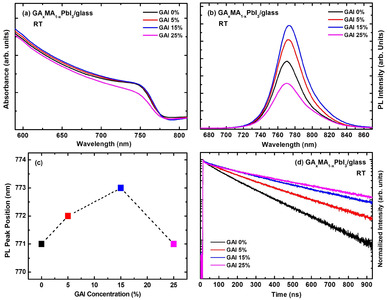 Figures 4(a)–(e) show the J–V characteristics and photovoltaic parameters of the ITO/SnO2/GAxMA1-xPbI3/spiro-OMeTAD/Austructured solar cells under illumination, revealing GA substitution effects. The measured photovoltaic parameters of the cells are summarized in Table II. The 5 %-GA sample demonstrated the highest photovoltaic performance with a PCE of 17.23 %, fill factor (FF) of 79.1 %, open-circuit voltage (VOC) of 1.04 V, and short-circuit current (JSC) of 20.89 mA/cm2. This improvement in device performance is due to the defect reduction, structural stability, and crystallinity improvement because of substituted GA, in addition to the effect of the extended bandgap. All photovoltaic parameters except for VOC are degraded for higher GA substitution. In the UV-vis, PL, and TRPL results, a 15 %-GA substitution was expected to show a superior device performance due to high absorbance, strongest PL intensity, and low defects. However, as shown in the results of XRD (Fig. 1), VOC increased with the extension of the bandgap, but the formation of ALD GAPbI3, which was prominent in SEM (Fig. 2), decreased FF and JSC and consequently degraded the device performance.

Table 2 . Photovoltaic parameters for solar cells with the average values and standard deviation..

We present a suitable GA and MA cation combination with improved photovoltaic performance compared to MAPbI3. We demonstrate that substituting some GA cations helps reduce defects and improves crystallinity. The prepared GAxMA1-xPbI3 perovskite led to a 17.23 % PCE for a GA substitution of 5 %. However, it is emphasized that excessive GA substitution can lead to aggregation of lowdimensional GAPbI3 and degrade the device performance.

This research was supported by the Basic Science Research Program through the National Research Foundation of Korea (NRF) funded by the Ministry of Education, Science, and Technology (NRF-2019R1A2C1086813). Time-resolved photoluminescence measurements were performed at the Central Lab of Kangwon National University.