Finite-difference time-domain simulation of GaN nanorod arrays with linearly polarized ultraviolet (UV) (325 nm) and visible (513 nm) light has been carried out. Enhanced light absorption of nanorods with confined electric field in the surrounding gap was observed. To identify the rationale of this finding, we studied their three-dimensional graphical profile and then realized that 1) modal resonance is developed with absorption gain in the UV region and 2) reflection at the interface with substrate leads to a subtle increase of absorption of visible light. By solving the eigenvalue equation, we also confirmed that TM11 mode of leaky-mode resonance is responsible for the observed modal absorption of UV light.

Engineering light in semiconducting devices, especially at the subwavelength scale, has been of great interest because its achievement both enhances efficiency and reduces cost, important aims of the optoelectronics community [1–4]. In this regard, carefully designed structures with tailored surfaces have been pursued [5]. Effective light management can be further achievable in a specific structural configuration of nanomaterials if the quantum confinement effect and nanophotonics are appropriately utilized [6–8].

The numerical approach has its own merit in the sense that it may provide a plausible route towards the advancement of nanomaterial synthesis. Besides, it may be possible to understand the actual mechanism during the interaction of light with semiconducting nanomaterials. Among the most practical and versatile tool proven for use in a variety of concerned applications is the finite-difference time-domain (FDTD); the solution of the time dependent Maxwell equations in mesh, namely Y-cells [9]. In particular, FDTD implements finite difference as an approximation in solving the differential equations of Ampere’s law and Faraday’s law, along with the Yee algorithm. Therefore, the use of FDTD allows one to identify the electric/magnetic field as well as the light transmission/reflection/absorption at all points in the domain.

In our previous work, we reported enhanced light absorption behaviors in GaN nanorod arrays with different filling factors using Lumerical FDTD methods. We found out that: 1) lower filling factors induce effective absorption gain and 2) non-uniform electric fields in gaps between nanorods lead to modulation of local refractive index and then distort the light propagation path [10]. However, the fundamental origin of the absorption gain with the localized electric field was not carefully considered.

Withthis in mind, we conducted the FDTD simulations for GaN nanorod arrays with a specific filling factor; these simulations clearly revealed the 3D profile of the absorption and electric field, and can possibly provide a rationale for the previously observed phenomenon.

Lumerical FDTD simulation was conducted for hexagonal arrays of GaN nanorods (height of 1 µm, diameter of 100 nm) on Si substrates [11]. The spacing between nanorods was kept at 100 nm, which corresponds to a filling factor of ∼33 %. The boundary conditions for the calculation were chosen as periodic in the lateral plane of the nanorod arrays and as perfectly match layer along the longitudinal direction of the nanorods in which the light propagates. For the light source, a plane wave of ultraviolet (UV) (λ = 325 nm) and visible light (λ = 513 nm) with a linear polarization (//y) was considered. The wavelengths of 325 and 513 nm were intentionally preferred in simulations because they are identical to those of HeCd and Ar lasers, respectively. It should be noted that these are commonly used in the traditional optical studies such as PL and Raman measurements. The size of the Yee cell and the locations of the power monitor were set identical to those of previous works: 1–1.5 nm in all the directions and at depths of 0, 10, 40, 80, 140, and 240 nm from the top of the nanorods (lateral; xy) and at the cross-sections of the nanorods (longitudinal; xz).

Figures 1(a) and 1(b) shows the vertical profile of light absorption and the electrical field of the GaN nanorod arrays. Confined V-shape light absorption, evidence of the waveguide mode, was observed at 325 nm [12]. The Fabry-Perot resonances were found in the 513 nm case because the fraction of light was reflected at the interface with substrate and traveled back. Since 513 nm is equivalent to an energy of 2.43 eV, which is smaller than the energy bandgap of GaN, the light absorption is not effective. Approximately 5 % of total light was absorbed throughout the nanorod volume. In no circumstances was the Lambertian absorption profile realized for either of the cases [Figs. 1(c) and 1(d)] [10,13].

We investigated the depth dependent lateral graphic profile of the light absorption with the electric field distribution. With light of 325 nm, modal resonance with two-fold symmetry at depths of 80–240 nm was revealed, which corresponds to the volume having the abrupt increase in absorption (Fig. 2). The electric field distribution also follows the modal characteristics. The modal resonance scheme was originally developed for resonators at macro-scale. The scope was recently expanded to nanostructures [14–16]. Therefore, the resonance modes became leaky and were influenced by surroundings, often leading to a coupling effect. The Lambertian absorption limit can be exceeded near the wavelength of the resonance peak. 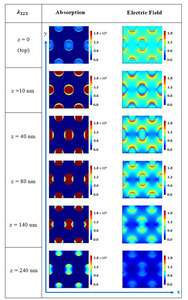 The resonance peak of the leaky-mode can be calculated by solving the eigenvalue equation below. We assumed that the nanorod is a cylinder with infinite length.


Here, is the azimuthal mode order, is the nanorod radius, is the permittivity of the rod, and are the wavevector total and along the rod axis in the free space, and are the transverse components of the wavevector in the rod and air, and and are the order Bessel and Hankel functions of the first kind, respectively. The required refractive index information of GaN materials was obtained from the website ‘Refractive Index Info’ [17].

As can be seen, leaky mode resonance is dependent on the optical and geometrical properties of nanorods. In the cases of = 0 or = 0, the left side of the equation becomes zero, and, in turn, the modes become either transverse magnetic (TM) or transverse electric (TE) modes. When the first term on the right side becomes zero, the TM mode would be present. When the second term is zero, the TE mode would be expected. For our GaN nanorod arrays, only TM11 mode must be located in the UV region of ~243 nm. Note that the observed absorption and electric field distribution in our FDTD results is identical to the analytically-predicted TM11 profile. Unfortunately, this eigenvalue equation is not definitely solved if the wavevector of incident light is parallel to the axis of the nanorods. An approximation was conducted to interpret the modal resonances and showed a red-shift from the TM/TE modes with = 0, which shift can be easily more than ~100 nm [14]. In addition, it is worthwhile to mention that the increase in ‘effective’ refractive index due to the focused electric field in the air gaps between nanorods may also lead to the red-shift [10,15]. From this analogy, we claim that observed modal absorption is attributed to leaky-mode resonance TM11. Also, it should be noted that modal absorption at the wavelength of 513 nm is not clearly shown in the current FDTD study (Fig. 3). 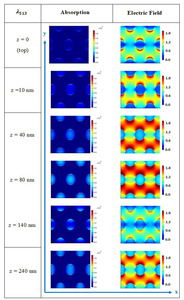 With light of 513 nm, confined electric field with zig-zag patterns in the gap area was clearly observed, which is similar but much stronger than the case with 325 nm. We believe that these unique electric field patterns have roots in coupled effects of light polarization and its related carrier distribution in nanorods.

We used FDTD methods to investigate the rationale of enhanced light absorption with confined electric field observed in GaN nanorod arrays. From graphical 3D profiles of absorption and electric field, we found that 1) leaky-mode resonance is developed with absorption gain at 325 nm, and 2) reflection at interface with substrate lead to increase of absorption at 513 nm. Through calculation of the eigenvalue, the observed modal resonance at the depth at which abrupt absorption gain occurs was attributed to the TM11 mode.

The authors declare no conflict of interest.