Aluminum-doped ZnO (AZO) thin films were deposited by atomic layer deposition (ALD) with respect to the Al doping concentrations. In order to explain the chemical stability and electrical properties of the AZO thin films after hydrogen peroxide (H2O2) solution immersion treatment at room temperature, we investigated correlations between the electrical resistivity and the electronic structure, such as chemical bonding state, conduction band, band edge state below conduction band, and band alignment. Al-doped at ~ 10 at % showed not only a dramatic improvement of the electrical resistivity but also excellent chemical stability, both of which are strongly associated with changes of chemical bonding states and band edge states below the conduction band.

Transparent conducting oxide (TCO) materials has attracted a great amount of attention for the technological realization of the next generation of see-through transparent electronics such as organic light emitting diodes (OLEDs), solar cells, smart windows, thin film transistors (TFTs), flat panels displays (FPDs) and touch screen panels (TSPs) [1,2,3]. In most cases, indium tin oxide (ITO) thin film has been extensively employed as the TCO layer because of this material’s excellent electrical and optical properties [4]. However, ITO film has some drawbacks, such as the high cost of indium and its lower wet etch rate compared with those of ZnO or indium gallium zinc oxide (IGZO), which can lead to damage in the active layer [5]. Therefore, alternative TCO films with similar or better properties are needed, and studies have been performed in this area. Recently, aluminum-doped zinc oxide (AZO) film has been intensively studied as a candidate for TCO applications because it has many advantages such as high optical transparency of > 80% in the visible region and low electrical resistivity of ~ 10−3 Ω·cm [3,5]. However, the AZO thin film has a small process window because the electrical properties greatly change depending on the doping concentration of Al. Therefore, in order to widen the process window, it is necessary to develop a process capable of decreasing the resistivity of the AZO thin film via a simple post-treatment method. In addition, since most electronic devices have stacked structures, mechanical/chemical stability must be ensured in the process of depositing and etching adjacent layers (e.g. using photolithography or a lift-off process) [5].

In our study, we provide a post-treatment method that can ensure facile modulation of the electrical properties at room temperature of an AZO thin film according to the Al doping concentration; this method also provides information on the chemical stability of the AZO thin film with H2O2 solution.

Using an ALD technique at the substrate temperature of 250°C, AZO thin films with various Al doping concentrations and with thicknesses of 100 nm were deposited on thermally grown SiO2 layers on a heavily boron-doped -type Si wafer. The detailed ALD deposition procedure for AZO thin films is provided in our previous report [6]. The doping concentration of Al of the AZO thin films was controlled using changes in the ratio of the supercycle, consisting of the number of cycles of ZnO and Al2O3, as shown in Figure 1 (a). For the deposition of AZO thin films, the number of ALD cycles was controlled with Al doping concentrations of 1, 3, 5 and 10 at%. The film compositions were investigated using Rutherford backscattering (RBS) and simulation by the Rump program [7]. Then, all AZO thin films were immersed in 30% hydrogen peroxide (H2O2, Sigma Aldrich) for 5 min at room temperature to investigate the effect of H2O2 on the chemical stability and electrical properties of the AZO thin films. The surface morphology was investigated using atomic force microscopy (AFM). The electrical properties, such as the carrier concentration, Hall mobility and resistivity were examined using a Hall measurements system with a permanent magnet of 0.56 Tesla at room temperature. The chemical bonding states and the composition were also investigated by X-ray photoelectron spectroscopy (XPS) with a pass energy of 23.5 eV and using a monochromatic Al Kα source. The detailed electronic structures, related to changes in the band edge state below the conduction band, were investigated by spectroscopic ellipsometry (SE). In particular, SE measurement was performed by a rotating analyzer system with an auto-retarder in the energy range from 0.74 eV to 6.4 eV, with the incident angles of 65°, 70°and 75°.

Figure 1(b) shows that the RBS spectra of the AZO thin films containing 1, 3, 5 and 10 at% of Al deposited on a carbon substrate accurately matched the target Al concentrations, which will hereafter be indexed as AZO 1%, AZO 3%, AZO 5% and AZO 10%, respectively. The electrical properties of the AZO thin films with H2O2 solution immersion treatment were investigated by Hall measurement at room temperature. Figure 2 (a) shows the resistivity of the AZO thin films before and after H2O2 solution immersion treatment with respect to the Al doping concentration, while Table 1 summarizes the detailed electrical resistivity values. First, the AZO thin film has an optimum electrical resistivity at an Al doping concentration of 3%, which is reasonable behavior comparing to previous reports [3,5]. After the H2O2 solution immersion treatment, the electrical resistivity of the AZO thin films decreased regardless of the Al doping concentration. In particular, when the Al doping concentration was 10%, it is obviously seen that the resistivity most strongly decreased compared with the other Al doping concentrations. Figure 2(b) shows the electrical properties of the AZO 10% film before and after H2O2 solution treatment. As can be seen in Figure 2 (b), the decrease in the resistivity of AZO 10% is more closely related to the increase in the carrier concentration rather than it is to the electron mobility. Therefore, the remarkable changes in resistivity of AZO thin film can be associated with the carrier generation by defect states such as oxygen vacancies, which are affected by the H2O2 solution treatment. More discussion is provided below to consider the chemical bonding state and the electronic structure. The chemical bonding states were observed by XPS; Figure 2(c) and (d) shows the changes in the O 1 and Zn 23/2 spectra. Using Ar ion at 500 V, XPS spectra were measured after eliminating surface contamination by adsorbed OH, C, H2O, etc. For detailed analysis of the chemical bonding states, the O 1 and Zn 23/2 spectra were carefully normalized and de-convoluted with three different Gaussian peaks. The three representatively assigned peaks from low binding energy relate to the oxygen state in the metal-oxide lattices (O1), the oxygen deficient state (O2), and the chemisorbed or dissociated oxygen states or OH− impurities (O3) [8]. The relative area of the oxygen deficient bonding states (O2) dramatically increases after H2O2 solution immersion treatment. In addition, two representatively assigned peaks of low binding energy and high binding energy are related to the Zn 23/2 binding energy in the zinc-oxygen (Zn-O) bond and the Zn(OH)2. These XPS results demonstrate that the AZO thin films after H2O2 solution treatment have larger oxygen related defects due to the oxygen deficient bonding states, which contribute to the increase of the carrier concentration. Moreover, the hydrogen atoms bonded to the surface oxygen atoms may increase the surface conductivity [9].

This research was supported by the Basic Science Research Program and the framework of international cooperation program through the National Research Foundation of Korea (NRF) funded by the Ministry of Education (2016R1A6A1A03012877 and 2015K2A2A 7056357). 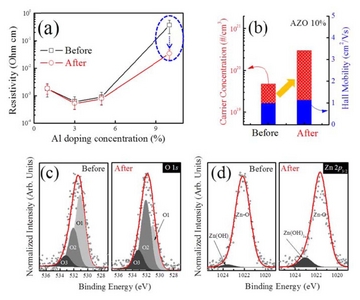 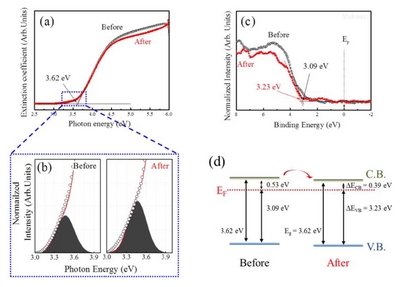 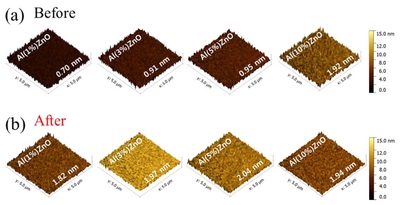 Fig. 4. Surface morphology of AZO thin film (a) before and (b) after H2O2 solution treatment with respect to the Al doping concentration.