A Photocatalysis process uses ambient oxygen from air and irradiation, fundamentally UV light, to generate oxidation and reduction which can degrade almost all harmful organic and inorganic compounds to nontoxic substances. This study was focused on enhancement of photocatalytic activity which improves the photocatlytic efficiency with TiO2 particle by mixing of certain amounts of Zn particles. We analyzed degradation of organic pollutant materials such as toluene and phenol with the mixed photocatalysis by using UV-visible spectrophotometer and obtained a result that photocatalytic activity is increased with increasing amount of Zn particle. Especially, in the case of TiO2 (1 mmol) and Zn (0.1 mmol) mixture photocatalyst, we obtained at least 2 times higher photocatalytic activity compared with the commercially available TiO2 photocatalyst (Degussa P-25), indicating that our mixed photocatalyts (Zn-doped TiO2) is very effective of removing both organic dye and pollutants and the conversion rate of toluene is much faster than that of phenol.

These days, a major issue about water pollution is the residual dyes from several sources example textile industries, paper and pulp industries, dye and dye intermediates industries, pharmaceutical industries, tannery and craft bleaching industries and a wide variety of persistent organic pollutants have been introduced into our natural water resources or wastewater treatment systems. Varieties of techniques have been employed to degrade those organic contaminants and advanced heterogeneous photocatalysis involving titanium dioxide (TiO2) photocatalyst appears to be one of the most promising technology [1–6].

TiO2 photocatalyst has been extensively used for environmental applications because of its high oxidative power, non-toxicity, photstability, and water insolubility properties under most conditions [7–8]. It is initiated when the amount of UV irradiation absorbs by TiO2 transcends its band gap energy to induce the separation of electron from the valence band to the conduction band. The electrons will react with the oxygen to produce superoxide anions and parallelly holes will react with water to produce the hydroxyl radicals to degrade and mineralize the organic compound [9]. TiO2 with anatase crystal structure is more favorable than rutile as it is more active with band gap energy of 3.2 eV than rutile (3.0 eV) [10]. Higher surface area of TiO2 anatase than rutile is another factor affecting its higher photocatalytic activity efficiency. Zinc (Zn) metal is good adsorption ability of organic material like a pollutant. Therefore, when using a photocatalyst such as Zn-doped photocatalysts to decompose the organic material, it will give a much more effective in a short time in the photolysis. To prepare these catalysts, 1 mmol (79.866 mg) of TiO2 dissolved into 20 mL of a target organic material solution and added various amount of Zn particles. So, this experiment is to study the effectiveness of decontamination in progress when the adsorption of zinc and photolysis of the titanium dioxide material at the same time.

Commercially available TiO2 photocatalyst, namely Degussa P-25 that consists of anatase : rutile ratio of 7:3 with average particle size of 30 nm, was used as reference material and added Zn particle with different mixed ratio for making the Zn-doped TiO2 photocatalysts to see a Zn doping effect on photocatalytic activity. (1) 4 samples with TiO2 particle and Zn particle (209988 ALDRICH Zinc dust, <10 μm, 98%) were prepared as 1 mmol TiO2 (powder A), 1 mmol TiO2 and 0.03 mmol Zn (powder B), 1 mmol TiO2 and 0.05 mmol Zn (powder C), 1 mmol TiO2 and 0.1 mmol Zn (powder D), separately and dispersed each in a distilled water after which were grinded via mortar and pestle at 30 min and dried at 100°C in dry-oven, respectively. The powder A, B, C and D were then sonicated at 25°C for 1 hour and stirred at 25°C for 10 minute. (2) TiO2 and Zn mixture powders (A, B, C and D) were characterized by a X-ray diffractometer (Rigaku Ultima IV) and a eld emission scanning electron microscopy (FE-SEM) (JSM 7800, JEOL) to check both crystallinity and phase of materials as well as surface morphology, respectively. (3) Powders of A, B, C and D in malachite green (MG) solution were irradiated under 254 nm UV lamp for 1–120 min. in MG solution, which was the chloride salt [C6H5C(C6H4N(CH3)2)2]Cl solution, was prepared by dissolving 1 mg of MG in 1000 mL distilled water. The concentration of this solution was 2.74×106 M (mole/L), and after 10 ml of MG was taken, it was dispersed into the powders A, B, C and D, respectively. The changes of concentration of MG dipped into the powders were evaluated using UV-visible absorption spectroscopy (UV-3600 UV-VIS-NIR Spectrophotometer). (4) In addition to MG solution degradation experiments, we carried out the photocatalytic conversion experiments on the organic pollutant materials such as toluene and phenol.

Before both XRD and FE-SEM measurements as well as photocatalytic reactions, the powder A, B, C and D including the dopants (Zn particle) were dried at 100°C for 2 hours. Figure 1 showed the X-ray diffraction (XRD) pattern of the Zn powders. Figure 1(a) was obtained before grinded and dried, while the Figure 1(b) was taken after grinded and dried. Figures 1(a) and 1(b) gave very similar diffraction pattern and matched well with the bulk Zn powder XRD data. As a result, Zn powder was not changed after grinded in distilled water and dried at 100°C. Figure 2 showed the FE-SEM images of the powder A, B, C and D, respectively. Powder A showed only image of TiO2 particle with concentration of 1 mmol, but powders B, C and D showed images of TiO2 particle with different mixture ratio (0.03, 0.05, 0.1 mmol) of Zn particle. Zn particles confirmed by EDS mapping were increased as highly ratio as amounts of Zn particle from 0.01 mmol up to the molar ratio as 1: 0.1. From the Figures 1 and 2, we would get a positive answer about why we obtained the large enhancement of photocatalytic activity with TiO2 by adding Zn particles. Figure 3(a) shows the BET data of the Degussa P-25 pure TiO2 photocatalyst with surface area of 44 m2/g and there are very small amounts of micro-pores between particles with small value of Vtot(0.12 ml/g), respectively. With adding Zn particle into pure TiO2 with 1:0.1 mixture ratio, there are some meso-pores together with micro-pores due to relatively large distribution of the different Zn sizes (see Figure 3(b)), even though we got very small surface area (0.42 m2/g), but it has relatively very large (more than 30 times) pore volume of Vtot=4.2 ml/g, suggesting various adsorption sites on the Zn-doped TiO2 photocatalysts. Figure 3(c) shows high resolution X-ray photoelectron (XP) Ti 2p spectrum of a sample as Figure 2 (d), indicating that with increasing the Zn particle doping, some part (about 5.6%) of Ti2+ from pure TiO2 changed its oxidation state from +4 to +3 due possibly to the interaction with ZnO (having +2 oxidation state) particle. This means that ZnO can reduce the oxidation state of TiO2, resulting in oxygen vacancy or defects which will increase the photocatalytic activity.

Powders A, B, C and D in 10 ml of MG solution were separately emitted under UV lamp with wavelength of 254 nm for 1, 3, 15, 30, 60, 120 minutes, and after UV irradiation, the solutions with each initial concentration of 2.74×106 M (mole/L) were analyzed with UV-visible spectrometry and observed the degradation of MG solution by checking the intensity decreasing of π–π* transition peak which was appeared at 615 nm. Figure 4 shows UV-visible spectra, taken after UV irradiation, those were all absorbed at the 615 nm wavelength and exhibited difference decomposition rate with samples. Based on their intensity changes in Figures 4(a), (b), (c), and (d), the concentration of dye remaining is directly compared with the spectrum at 615 nm wavelength. The absorption spectra of Figures 4 (a), (b), (c), and (d) were decreased the intensity over time, and the order in which the intensity was quickly decreased in the absorption spectra of (a), (b), (c) and (d), suggesting a Zn doping effect. Figure 4 was also used to calculate the amounts of the decomposed MG with UV exposure time for each sample and it can make the plots of Figure 5 which showed the variation of MG concentration with time for each sample and appeared a different slop of MG decomposition with UV exposure time to reach a final concentration compared to the initial concentration. Powder A was remained MG at 120 min about 0.3 C/C0, suggesting that the Degussa photocatalyst is not good material for removing both organic dyes and harmful pollutants. However, powder B was almost removed MG after 30 min., and powders C and D were almost removed MG after 15 min. Especially, powder D was fastest removed the MG, reflecting highest decomposition rate with very stiff slope in Figure 5. This means that with increasing the Zn doping amounts, the mixed photocatalyst can removed the MG very fast and completely, indicating very high catalytic activity induced by Zn particles. In summary, the mole ratio of zinc was high, the better the photocatalytic efficiency due possibly to both high amounts of oxygen vacancy or defects in mixed catalysts and relatively good adsorption ability of Zn.

To see other Zn effect on increment of photocatalytic efficiency of removing organic pollutant materials such as toluene and phenol, additional photocatalytic reactions were to utilize the possibility of hazardous substance degradation in the environment-friendly industrial applications. Figure 6 shows the photo-degradation data of toluene and phenol obtained after different UV exposing time with TiO2 (1 mmol) and Zn (0.1 mmol) mixture photocatalyst. 130 and 200 ppm of toluene and phenol solutions were initially prepared, and the same Zn-TiO2 mixture catalyst was soaked in 10 mL of each solution for the photocatalytic performance measurements. UV-light with a wavelength of 254 nm in a black box was exposed for 60 and 120 min., respectively. After 60 and 120 min. UV-light exposure, toluene and phenol were decomposed till concentrations 28 of 104 ppm, indicating that our mixed photocatalyts (Zn-doped TiO2) is very effective of removing both organic dye and pollutants and the conversion rate of toluene is much faster than that of phenol due possibly to different reactivity of pollutants or initial concentration. This means that further experiment is necessary of identify this thing as well as detailed mechanism of newly developed photocatalyst, especially the role of Zn.

Various fields of experiments were researched to improve of photocatalytic performance for decomposing organic pollutants. Already, lot of researchers did many of the existing methods, but we contrived a cheap, fast and easy study by adapting simple fabrication process. Thus, we researched for high efficiency way that it was reaction to assist in removing organic dye as well as pollutants and to do not interfere in the photolysis. Conclusively, due possibly to high amounts of oxygen vacancy or defects which were induced by TiO2 and Zn interactions in the mixed catalysts as well as relatively good adsorption ability of Zn with different sizes and pore distributions, mixtures of TiO2 and Zn particles had an excellent photocatalytic performance and adsorption reaction at the same time.

This work was supported by the National Research Foundation of Korea (NRF) grant funded by the Korean government (MSIP) (No. 2010-0027963). 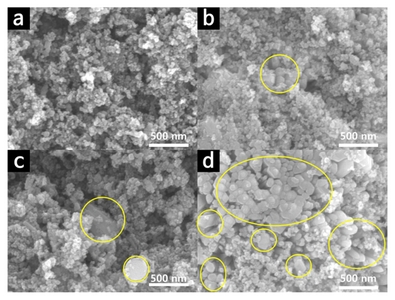 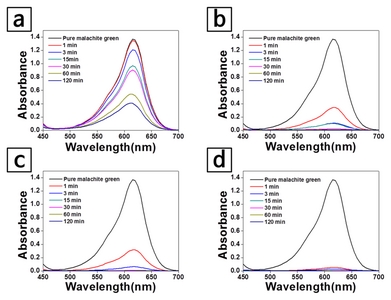 Fig. 4. Changes of UV absorbance for the powders A, B, C, and D with varying the photolycatalsis time taken by UV-visible absorption spectra, respectively. 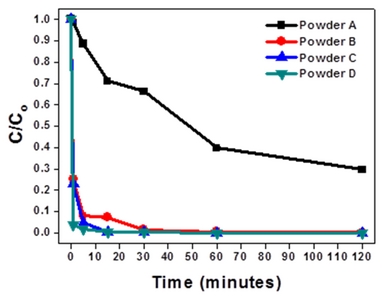 Fig. 5. Variation of concentration as a function of UV irradiation time obtained from for the degradation of MG with various photocatalysts (powders of A, B, C, and D). 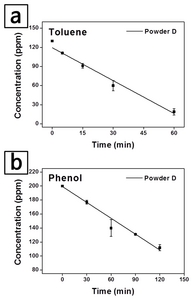