We fabricated a transparent luminescent solar concentrator (LSC) film using Lumogen F Violet 570 (V570) luminescent molecules and polyethylene-co-vinylaccetate (EVA) polymer. The transparent LSC was produced by a solution process (Doctor Blade coating) using a tetrahydrofuran solvent. We measured physical properties such as thickness, absorption efficiency, emission efficiency, and photocurrent characteristics of the LSC films. We also discuss the physical properties of the LSC films by observing the crystallinity and surface morphology using X-ray diffraction and atomic force microscopy. During the formation of LSC films, V570 molecules did not induce macroscopic changes, but had a significant effect on nanoscale morphology, i.e., surface roughness. In addition, changes in the light scattering characteristics were observed when the V570 concentration increased, which was found by X-ray diffraction to be related to the formation of V570 crystals, not EVA crystals. The light scattering and surface roughness of a film could be improved through heat treatment. As a result, we obtained ~ 1.3 times larger photocurrent in thermally treated LSC films.

A luminescent solar concentrator (LSC) using luminescent molecules and a polymer matrix is a device for selective absorption of sunlight and for collecting the emitted light to the side edges of the collector through total internal reflection (TIR) [1?4]. An LSC reduces the amount of solar cells required for solar power generation [5,6], and can selectively utilize the desired light in the solar spectrum according to the luminophore used. It is also possible to fabricate transparent photovoltaic devices by engineering the concentration of luminophores in LSC films. Thus, LSCs are attracting attention due to these many advantages [7,8]. However, the detailed principles of LSCs are complex because they involve a wide range of optical phenomena ranging from molecular physics such as light absorption and photoluminescence of luminophores, to macroscopic physics relating to light propagation inside the LSC via total internal reflection. Because an LSC concentrates light from photoluminescence of molecules, it is not straightforward to analyze the optical properties of LSC devices using conventional photovoltaic (PV).

The solar spectrum on the Earth’s surface ranges from 280 to 4000 nm, consisting of infrared (52.6 %), visible (43.0 %), and ultraviolet (4.6 %) light in the AM1.5G (Air Mass 1.5 Global) condition. The portion of UV is small, but it could induce material degradation in a PV device. Therefore, many technologies and materials have been developed to block UV for commercialization of high power PVs. Among various techniques, the conversion of UV light to longer wavelength light is considered a promising technique to improve both stability and energy efficiency in PV cells and modules [9].

Lumogen F Violet 570 (V570) is a 1,8-naphthalimide-based material that is widely used because of its unique optical properties and high quantum efficiency. It absorbs UV light up to 374 nm and emits visible range light at 427 nm [10?13]. Herein, we used V570 as a luminescent dye with polyethylene-co-vinylaccetate (EVA) polymer to produce a transparent LSC. We analyzed the relationship between the optical properties and structure of the transparent LSC film, and we attempted to understand the light collection performance for our fabrication conditions.

The five solutions (0.0, 0.4, 0.8, 1.2, and 1.6 wt%) were coated by Doctor Blade coater (MTI Korea, Korea). The gap between the blade edge and the substrate was 500 μm during the coating process. Coated films were dried for 3 min at room temperature (RT), then transferred onto a hot plate for 10 min drying at 60 °C. Some of the LSC films were annealed at 150 °C for 10 min to observe the change of LSC properties caused by heat treatment. We measured thickness of the films at 5 points each to obtain an average thickness by Digimatic Micrometer (Mitutoyo, Japan).

The transmittance and quantum efficiency were measured using a UV-vis spectrophotometer (V-750, Jasco) and integrated sphere equipped spectrofluorometer (Quantaurus-QY c11347, Hamamatsu). Then, the absorption and emission efficiency of LSC were calculated by Eqs. (1)?(3).

In , 1.5G(λ) and (λ) are the incident solar irradiation and absorption of the LSC, respectively. 0(λ)and (λ) in are the transmittance of the pure EVA film and the LSC films. In , PLQY(λ) is the photoluminescence quantum yield of LSC. λ1 and λ2 are the wavelengths where the absorption of LSCs begins and ends. λ1 and λ2 are 300 and 410 nm for LSCs including V570, respectively.

We attached a c-Si solar cell to the Lsc film samples to measure the photocurrent. An Oriel solar simulator (Newport, Class AAA solar simulator) was used to simulate the AM1.5G condition and the photoelectric properties were measured using a Keithley 4200 Source Measure Unit. The concentration factor was calculated by .

We performed X-ray diffraction (XRD) (X’Pert 3, Malvern Panalytical) and atomic force microscopy (AFM) (NX10, Park Systems) on the film samples. For XRD measurement, we adopted the specular reflection mode with 1.54 Å X-rays from a Cu target. AFM images were obtained by the non-contact mode (NCM) in a 50 × 50 μm2 sized region.

Figure 1 shows the variation of thickness of the Lsc film with the concentration of V570, which shows that the thickness change of the films was not large by the increase of V570 concentration. In pristine films (without heat treatment), the average thickness and standard deviation was 62.3 and 1.94 μm. After the heat treatment at 150 °C for 10 min, the film thickness increased by 2.4 % to an average of 63.8 μm. This result implies that the addition of V570 to the EVA / THF solution did not induce a macroscopic change when the concentration of V570 was less than 1.6 wt%. 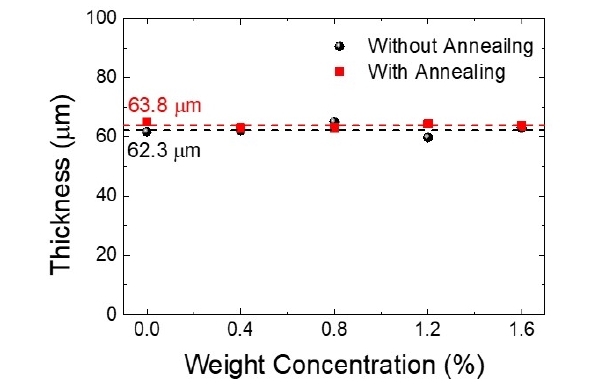 The effects of treatment on the transmission are shown in Figs. 2(a) and 2(b), and the absorption efficiency is shown in Fig. 2(c). The lowest transmittance was obtained at 374 nm, which was not affected by either the heat treatment of the Lsc film or the concentration of V570. In the 0.4 wt% film, the longest wavelength among the absorption peaks was 392 nm (3.16 eV), which is related to the change of the conjugated pattern of p electrons in the naphthalimide group in V570 [14]. Absorption peaks occurring at wavelengths of 374, 355, and 331 nm, and lower than 392 nm were related to the coupling of the 392 nm absorption band and the molecular vibration mode. The transmittance decreased as the concentration of V570 increased in the longer wavelength region (> 400 nm) where V570 does not absorb light. The decrease of transmittance at longer wavelength originated from the light scattering of Lsc film, not the absorption characteristics of the V570 itself. 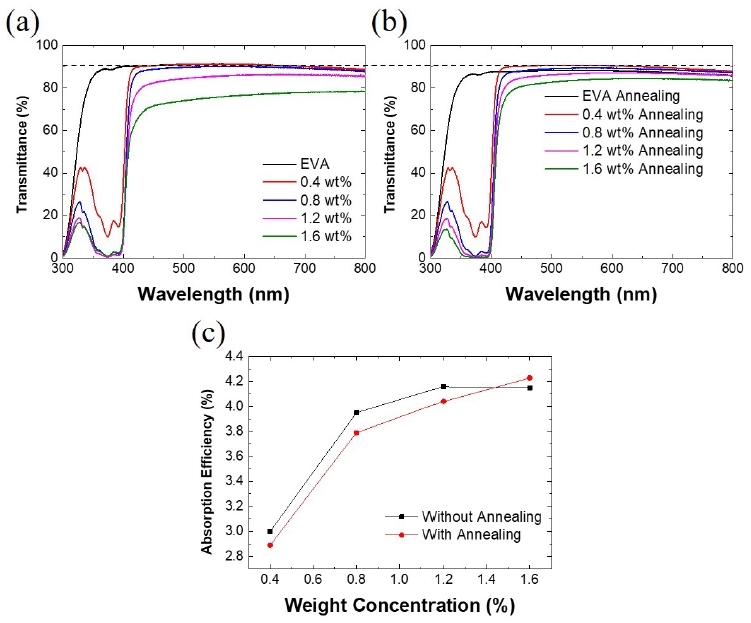 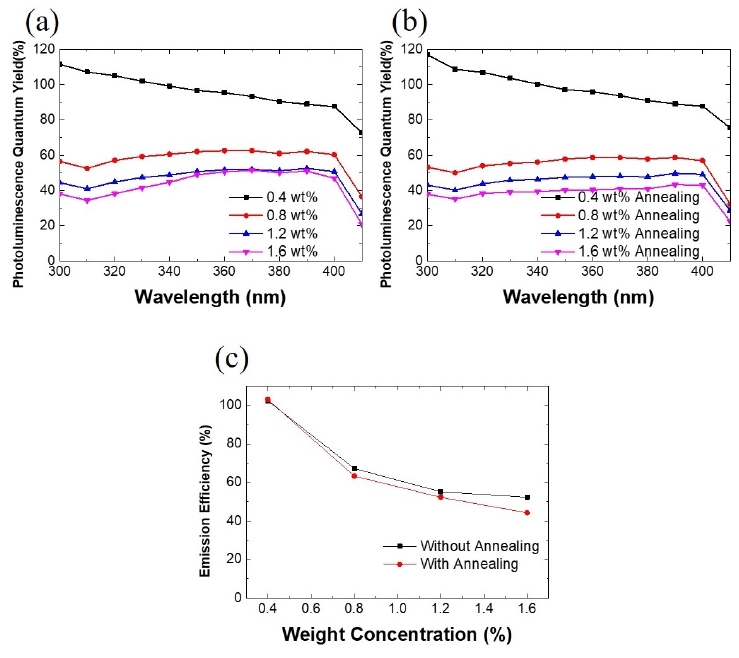 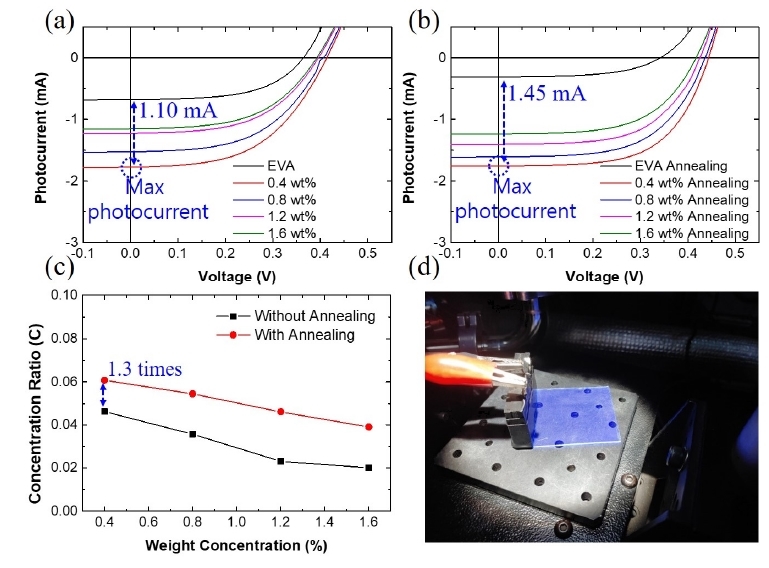 (Color online) Photocurrent properties of the LSC films depending on bias voltage (a) without heat treatment and (b) with heat treatment. (c) is the dependence of the concentration ratio of the LSC films with the concentration of V570. (d) shows the photograph of the photocurrent measurement device with the 0.4 wt% V570 LSC attached to the c-Si solar cell.

It is generally known that light scattering in polymer films is deeply related to crystallinity and surface properties of the film [16,17]. Therefore, we used XRD and AFM to understand the crystallinity and morphology at each sample preparation condition as shown in and 6. The diffraction peak of Fig. 5 is from the alkyl chain of V570, and it indicates the formation of V570 crystals in the film, with a magnitude that increases with increased concentration of V570. Above 0.8 wt%, the V570 crystal peak was clearly observed, which is in good agreement with the changes of light scattering characteristics in Fig. 2 (a). Figures 5(b) and 5(d) show the peaks of PE (polyethylene) group for different concentrations of V570, and which imply that the crystallinity of PE was not changed by the concentration of V570. However, heat treatment caused a reduction of crystallinity of PE as shown in Fig. 5(d). Therefore, it seems that the light scattering was not related to PE in this system because the light scattering was dependent on both concentration and heat treatment. As shown in Fig. 5(c), the V570 peak decreased after heat treatment, which is in good agreement with the scattering reduction results in Fig. 2(b). The XRD results thus imply that the scattering characteristics of the Lsc film are mainly caused by the crystals of V570, not the crystals of EVA.

After heat treatment, the formation of V570 crystals decreased, but the quantum efficiency of the Lsc film did not increase, as shown in Fig. 2(b). This relationship was related to stronger interaction of the V570 molecules after the heat treatment. Based on these XRD and light scattering results, we could confirm that heat treatment reduced V570 crystal formation but did not interfere with aggregation to the extent that it destroys intermolecular interactions.

We fabricated transparent Lsc samples using light-emitting molecules that absorbed light in the UV region, and analyzed their optical properties. We found that light scattering in the Lsc films was mainly dependent on the crystallinity of V570 rather than the PE group of EVA matrix. Heat treatment did not increase the absorption and emission efficiency of the Lsc film, but it reduced both surface roughness and light scattering. As a result, heat treatment could contribute to much improved light collection performance in Lsc films based on V570 and EVA.

This work was supported by a 2-year Research Grant of Pusan National University, and was also supported by the BK21+ project in 2019.