Most of these studies focused on device characteristics and efficiency of perovskite single crystals, and little attention is given to the fundamental properties of single crystals [5–7]. To develop high-quality single crystals, asymmetrical photoluminescence (PL) emission spectra occurring in MAPbBr3 single crystals must be addressed. Yang . reported band-to-band transitions from surface regions and carrier diffusion from the surface to the interior regions [8]. Chen . attributed asymmetrical PL spectra of the low-energy side to defect-related bound exciton transition at low temperatures [9]. Wang . demonstrated changes in PL spectra caused by the phase transition of perovskite single crystals with temperature, and low-energy PL peaks caused by the formation of vacancy for Br ions [10].

In this study, MAPbBr3 perovskite single crystals were synthesized using seed-induced and ITC methods at various crystallization temperatures to achieve rapid growth rates and high crystallinity. Subsequently, optical properties were evaluated using PL and timeresolved PL (TRPL) spectroscopy. With increasing crystallization temperatures, the rate of microcrystal formation increased. Thus, high-quality single crystals were synthesized with a high growth rate at 85 °C. The PL spectra showed asymmetrical shapes at room temperature, which may be attributed to the photon recycling effect that occurs inside the single crystal.

For the synthesis of MAPbBr3 perovskite single crystal samples, a 1 M solution of MA and PbBr2 was prepared in -dimethyl-formamide (DMF) at room temperature. The MAPbBr3 precursor solution was then filtered using a PTFE filter with a 0.2-mm pore size. To synthesize the seed crystal, 2 ml of the filtrated solution was placed in a beaker, and the beaker was kept in an oven at crystallization temperatures until the observed seed crystal was approximately 1 mm in size. The seed crystal was then placed in 5 ml of fresh precursor solution and baked in an oven at different crystallization temperatures between 80 to 100 °C. All seed induced crystals were then allowed to grow for 180 min.

Figure 1(a) shows images of the grown MAPbBr3 single crystal at different crystallization temperatures. The size of the crystals obtained when using the added seed-induced method was larger compared with that obtained using the general ITC method [11,12]. The largest crystal size obtained was ~63 × 59 × 25 mm3 at 85 °C. However, at crystallization temperatures greater than 90 °C, the spontaneous formation of smaller multiple crystals was observed; moreover, the crystals appeared stacked. This may be attributed to the decreasing solubility of MAPbBr3 in DMF with increasing temperature [11]. At higher crystallization temperatures, the precursor solution becomes supersaturated, thereby producing a large number of small crystals. This prevents the seed-induced crystal from growing further. To confirm crystallinity, we performed XRD measurements at room temperature. Figure 1(b) shows the XRD spectra obtained with diffraction angles (10° to 80°). The narrow and strong diffraction peaks at 15.3°, 30.5°, 46.3°, and 63.0° correspond to the (100), (200), (300), and (400) planes of the cubic phase, respectively [12]. As shown in Fig. 1(b), the sample crystallized at 85 °C exhibits stronger (~10 times) diffraction peaks compared to those of other samples. The full width at half maximum (FWHM) of the diffraction peaks is shown in the inset of Fig. 1(b). Except for the (100) plane, the FWHM of the diffraction peaks is the lowest in the 85 °C sample. The strong intensities and narrow linewidths are indicative of high crystallinity. Thus, we experimentally confirm that high-quality MAPbBr3 single crystals with a high growth rate can be grown using the seed-induced ITC method at 85 °C.

(Color online) (a) MAPbBr3 single crystal images at different crystallization temperatures. (b) X-ray diffraction patterns at room temperature. The inset shows the full width at half maximum (FWHM) of (100), (200), (300), and (400) planes.

Figure 2(a) illustrates the room temperature PL spectra of the MAPbBr3 single crystal samples. The PL peak positions of all samples are located at around 534 nm; for the sample obtained at 85 °C, the peak intensity is approximately three times stronger compared to that of the sample obtained at 90 °C. Thus, the PL results are in good agreement with the XRD data. However, we observed variations in the PL spectrum with changing irradiation positions of the excitation laser beam. Two spots (center of sample: spot A and edge of sample: spot B) with differences in PL peak positions are illustrated in the inset of Fig. 2(b). In the PL peak position, spot A is located at a shorter wavelength range than spot B, and the difference between the two PL peak positions is about 5 nm. To identify the change caused by the difference in the laser irradiation position, an excitation power-dependent PL experiment was performed at the two spots. The variations in the PL characteristics (peak position and relative intensity) corresponding to the power of the excitation source at the two spots showed a similar tendency (not shown here). 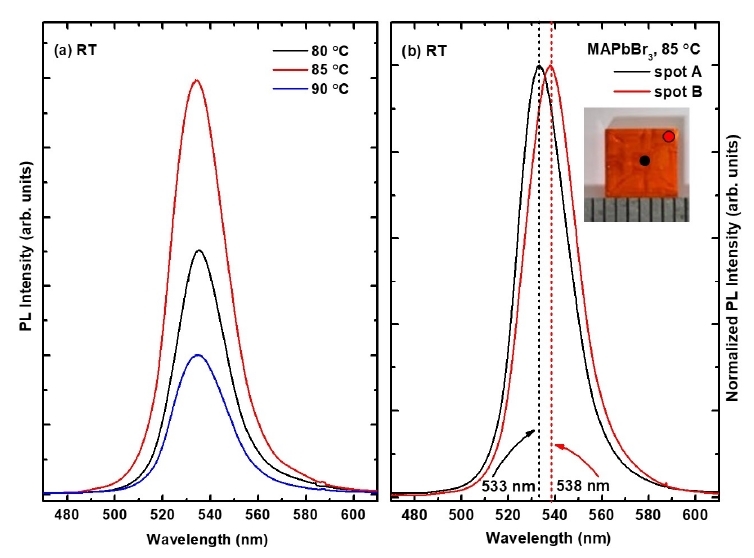 The PL spectra for all samples exhibit asymmetric shapes, with the shoulder located in the long-wavelength (low energy) side at room temperature. The temperature-dependent PL measurements were performed to investigate the low-energy state of PL emission. Figure 3(a) shows the temperature-dependent PL spectra measured at spot A of the 85 °C sample for the selected temperatures. MAPbBr3 single crystals are well known for phase transitions to cubic (T > 230 K), tetragonal (145 K < T < 230 K), and orthorhombic (T > 145 K) phases as the temperature decreases. Our XRD measurement was performed only at room temperature, and thus, we could not directly confirm the phase transition with the change in temperature; however, the temperature dependence of the PL peak in Fig. 3(b) shows a similar tendency to the reported results [9,10]. 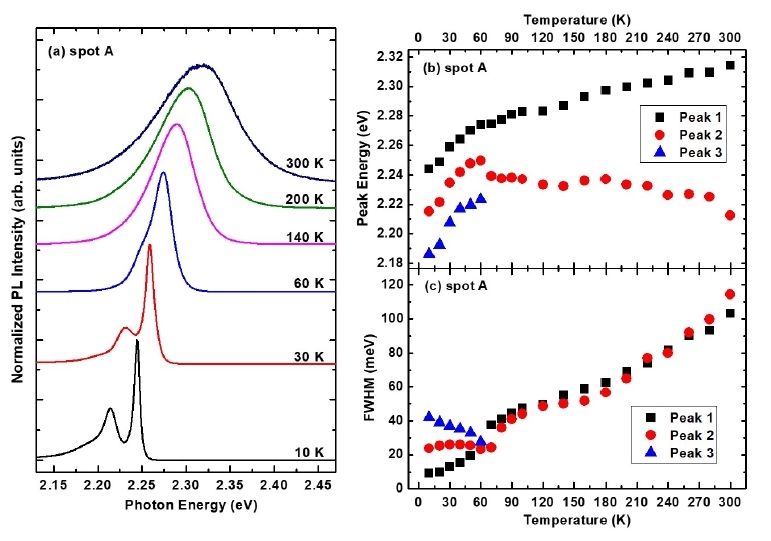 (Color online) Temperature-dependent (a) PL spectra, (b) PL peak positions, and (c) FWHM of the 85 °C sample on laser irradiation spot A.

The obtained PL spectra can be separated into three Gaussian peaks (T ≤ 70K) and two Gaussian peaks (T > 80 K). The PL peak energies and FWHM extracted from Gaussian fitting results are shown in Figs. 3(b) and 3(c), respectively. Similarly, a change in FWHM with increasing temperature was observed at the two peaks. This is consistent with the excitation power-dependent PL results, which suggest that the two PL emission origins are the same. The sub-peaks appearing in low-temperature regions can be attributed to the phase transition from the orthorhombic phase. At high temperatures, the main peak (Peak1) originates from band-to-band transition [10]. However, the origin of the low-energy peak (Peak2) observed in the PL spectra at high temperatures is unclear [8,10,13].

To investigate the carrier dynamics of the shoulder peak (Peak2), TRPL measurement was conducted as a function of wavelength at room temperature. Figure 4(a) presents the PL decay curves of spot A (85 °C sample). With an increase in the emission wavelength from 515 to 563 nm, the PL decays become slower. The PL decay times of the 85 °C sample were calculated using the bi-exponential decay function () = i exp(-t/τi), where i is the pre-exponential constant and τi is the decay time shown in Figs. 4(b) and 4(c). At the PL peak of spot A, the PL decay times of τ1 and τ2 are 0.42 and 2.1 ns, respectively. Fast and slow PL decay times, τ1 and τ2, are attributed to recombination centers present on the surface defects (Br vacancy) and the bulk of the MAPbBr3 single crystal, respectively [13,14]. 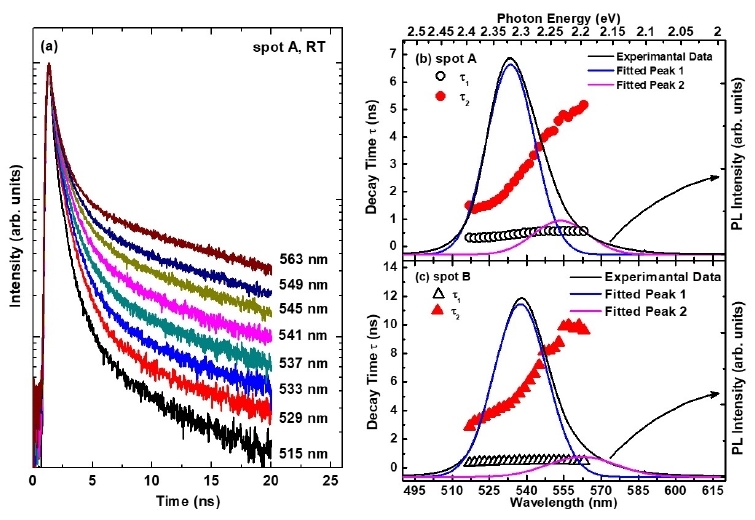 (Color online) (a) PL decay curves of spot A and PL decay times of (b) spot A and (c) spot B as a function of emission wavelength. The measured PL spectrum and fitted PL peaks are also shown.

Fang . demonstrated the photon recycling effect caused by the re-emission originating from the edge of the bulk after self-absorption and internal reflections [15]. After PL is generated at the surface of single crystal, part of the PL emission penetrates into the single crystal and is absorbed by itself. Reabsorbed photon represents re-emission with a red-shifted PL peak due to the stoke shift. These behaviors were well explained by the PL and TRPL results of this study. All optical properties in spot A, including the excitation power-dependent PL, temperature-dependent PL, and TRPL characteristics were similar to those in spot B, thereby indicating that the PL emission origins of the two spots could be the same. In Fig. 4(a), slower decay with an increase in the emission wavelength of the MAPbBr3 single crystal can be explained by the photon recycling effect. The accumulation of PL emissions penetrating inside the surface of the single crystal continues the process of resorption and re-emission, which results in an increase in decay time owing to an increase in the emission wavelength. In Figs. 4(b) and 4(c), the slow decay time τ2 at the low-energy side PL peak position is 4.9 and 8.4 ns for spots A and B, respectively. The longer lifetime at spot B can be explained by more active resorption and re-emission occurring at the single crystal edge.