To achieve highly efficient perovskite solar cells, it is important to design a metal oxide layer with high electron mobility. In this study, well-aligned ZnO nanorods (NRs) were prepared through the hydrothermal method using ZnO seed layers with varying thickness. The effect of the structural and optical properties of the perovskite layer deposited under the prepared conditions was systematically investigated via scanning electron microscopy, X-ray diffraction, ultraviolet–visible spectroscopy, and photoluminescence (PL) spectroscopy. The improved alignment of the ZnO NRs was found to affect the topography of the perovskite polycrystals, such as increased grain size and improved uniformity of the perovskite layer. The thicker the ZnO seed layer, the more enhanced the alignment of the ZnO NRs, resulting in larger and more uniform grains. The perovskite layer deposited on the well-aligned ZnO NRs exhibited increased absorbance and PL intensity without changing crystallinity. Our results will help improve the efficiency of high-quality perovskite devices based on ZnO electron transport layer.

The tremendous advancement in perovskite solar cell (PSC) devices began with the use of an absorber layer in dye-sensitized solar cells. In this study, mesoporous TiO2 was used to increase the contact area with perovskite and efficiently extract photogenerated electrons [1]. However, although the interface between the perovskite and the electron transport layer (ETL) inner surface can sometimes be an important factor in the performance of the solar cell, this interface cannot be easily controlled due to various complexities [2]. In a planar PSC architecture, the ETL is usually located directly at the bottom before the perovskite absorber is deposited. Thus, not only the topography and structure of the ETL surface greatly affect the interface, but also perovskites can affect the formation of the film. In addition, to achieve highly efficient PSCs, a metal oxide layer with high electron mobility should be designed [3]. Recently, many stable and efficient metal oxide materials used in PSCs, such as TiO2, ZnO, and SnO2, have been reported [4–6]. Among them, TiO2 has been widely used as a suitable ETL. However, TiO2 requires a high annealing temperature above ~500 °C, which will be an obstacle in the development of PSCs in future flexible substrates. ZnO has a similar bandgap and physical properties with TiO2 and can be synthesized at a lower temperature than TiO2, making it a suitable alternative for high-efficiency PSCs [7]. Nie reported that the morphological factors of perovskite grains include the performance of PSCs and stability [8]. Thus, a deep understanding on the formation of the perovskite layer with the applied ETL is valuable in creating stable and highly efficient PSCs.

In this study, well-aligned ZnO nanorods (NRs) were synthesized by the hydrothermal method by increasing the thickness of the ZnO seed layer through the sol–gel method to dramatically change the morphology of the ETL surface. Then, the perovskite layer was deposited by a one-step anti-solvent quenching method. The improved alignment of the ZnO NRs greatly influenced the formation of perovskite polycrystals. We subsequently investigated the structural and optical properties of the perovskite layer by using scanning electron microscopy (SEM), X-ray diffraction (XRD), ultraviolet–visible (UV-vis) absorbance, and photoluminescence (PL) spectroscopy.

ZnO NRs were synthesized on fluorine-doped tin oxide (FTO) glass substrates by a two-step process. First, a ZnO seed layer was deposited on the substrates using a sol–gel method, and then ZnO NRs were formed on the seed layer by the hydrothermal method. All materials used for the ZnO synthesis were purchased and used immediately without further purification. The ZnO seed precursor solution (0.5 M) was prepared by dissolving zinc acetate dihydrate (Alfa Aesar) in 2-methoxyethanol (Alfa Aesar), and ethanolamine (Alfa Aesar) was added as a stabilizer to form a mixed solution. The mixture was stirred for 60 min at 60 °C on a hot plate to obtain a transparent and homogeneous solution. The resultant sol was aged for 24 hours at room temperature. The sol solution self-reacted through aging and was spin-coated on the FTO substrate for 30 s at a rotation speed of 3000 rpm under ambient conditions. The resultant seed layer was then dried on the hot plate for 10 min at 300 °C. To obtain different thicknesses of the ZnO seed layer, the spin-coating and drying processes were repeated for 1 to 10 times. ZnO NRs were formed on the ZnO seed layer in the hydrothermal solution. The hydrothermal solution was prepared by mixing 0.05 M zinc nitrate hexahydrate (Alfa Aesar) and equimolar ratio hexamethylenetetramine (Alfa Aesar) in deionized water (Sigma-Aldrich). The aqueous solution was stirred for 60 min at room temperature. In the beaker with the hydrothermal solution, the ZnO seed layer face was placed at an angle toward the bottom face of the beaker to prevent precipitation of residues and was sealed. To perform a hydrothermal reaction, the beaker was placed in an oven at a constant temperature for 60 min at 95 °C. After the hydrothermal reaction was completed, the beaker was cooled in an ambient environment, rinsed several times with deionized water, and then dried on a hot plate for 10 min at 150 °C.

For the synthesis of the CH3NH3PbI3 perovskite precursor solution, the recipe previously reported by our group was used [9]. The grown ZnO NR layer was exposed to the ultraviolet (UV)-ozone for 15 min at 100 °C before depositing the perovskite layer, and then an anti-solvent quenching method was applied to deposit the CH3NH3PbI3 solution and annealed for 1 min at 100 °C.

Figure 1 shows the ultra-high-resolution SEM surface images of the ZnO seed layer, ZnO NRs/ZnO seed layer, and perovskite/ZnO NRs/ZnO seed layer, with S#, NS#, and PNS# as the number of the ZnO seed layer deposition repetition times, respectively. As the number of deposition repetition times of the ZnO seed layer increased from 1 to 10, the thickness of the seed layer became thicker from ~50 to ~200 nm, and the rough texture of the FTO substrate surface gradually mitigated. Finally, as shown in Figs. 1a) and 1(d)(, the ZnO seed layer completely covered the rough surface of the FTO substrate. Generally, ZnO NRs grown by the hydrothermal method prefer to grow in a direction perpendicular to the substrate surface [10]. The NRs with a thin seed layer mostly grew at an angle (Fig. 1(b)), whereas the NRs with a thick seed layer grew perpendicular to the plane (Fig. 1(e)). Hence, the ZnO NRs grown on the ZnO seed layer with improved surface texture (xml0) matured as well-aligned NRs due to the flat bottom surface. All the grown NR samples were synthesized under the same hydrothermal conditions (precursor concentration, growth temperature, and time), so they had similar diameters (~30 nm). However, due to the difference in alignment, the overall thickness of the NR layers was thicker as the alignment was improved. The influence of the perovskite layer formation on the alignment of the NRs is clearly shown in Figs. 1(c) and 1(f). The surface of the Pxml sample showed the formation of rough, small, and irregular grains, whereas the Pxml0 sample had a larger and more uniform grain and a more compact surface. 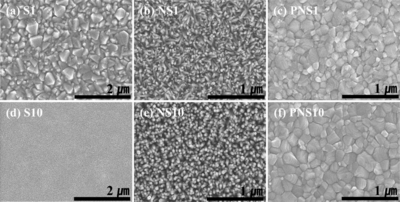 Figure 1. Surface scanning electron microscope images of (a and d) the ZnO seeds, (b and e) ZnO nanorods, and (c and f) perovskite samples with varying ZnO seed layer thickness.

Figure 2 shows the XRD spectra of the CH3NH3PbI3 samples deposited on ZnO NRs measured at different diffraction angles (10° to 50°). Relatively strong peaks appear in all samples at 34.45°, which is the (002) diffraction peak of the ZnO NRs. Hence, the ZnO NRs grown by the hydrothermal method preferred to grow in the (002) direction. As the number of the ZnO seed layer deposition repetition times increased, the intensity of the (002) peak increased because the orientation of the ZnO NRs was improved and was in good agreement with the SEM image results. Zhang and Pauporté [11] reported that depositing a perovskite on a ZnO material using a one-step solution process easily caused deterioration at the perovskite/ZnO interface during the annealing process, lowering the film quality compared with that in the two-step process. However, no residual PbI2 diffraction peak around 12.7° was observed in all our prepared samples. In addition, strong (110) peaks and other (220) and (310) diffraction peaks indicate that the precursor solution was well converted to the perovskite phase without degradation. The major perovskite (110) diffraction peaks of the three samples at 14.15° showed a similar intensity. This finding suggests that improving the orientation of the ZnO NRs changes the surface morphology without affecting the crystallinity of the perovskite layer. Consequently, we concluded that the improvement of the orientation of the ZnO NRs changed the grain size and uniformity without affecting the crystallinity of the perovskite. 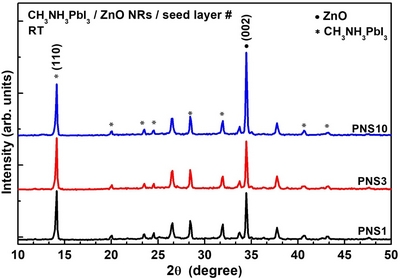 We measured the UV–vis absorbance and PL to investigate the optical properties of the perovskite layer on well-aligned ZnO NRs. In Fig. 3(a), the absorbance of all samples was measured near 783 nm. The thicker the ZnO seed layer (Pxml0), the better the absorbance over the entire wavelength range. This result is related to the large grain size and increased uniformity in the SEM image of Fig. 1(f). Wen reported an increase in absorbance to enhanced grain size and uniformity [12]. The intensity of the PL spectra in Fig. 3(b) gradually increased as the thickness of the seed layer increased. Nukunudompanich adjusted the perovskite grains to improve the performance of the device. Herein, ETL changed the perovskite grain size and uniformity by obtaining different surface roughness by applying different TiO2 synthesis methods. Larger grains were obtained on small roughness surfaces [13]. In our case, well-aligned NRs (xml0) would have a smaller surface roughness compared with samples with a relatively unaligned thin seed layer (xml), which would affect the formation of perovskite polycrystals, such as less void formation at the interface between perovskite and ZnO NRs. Therefore, as the alignment of the NRs improves, the size of the perovskite grain becomes larger and more uniform. Clearly, the CH3NH3PbI3 film grown on the well-aligned ZnO NR layer demonstrated improved morphology with a large grain size and good uniformity, resulting in enhanced absorbance and PL intensity. 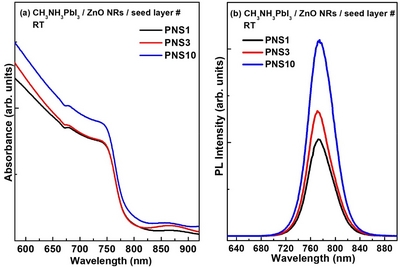 Figure 3. Room-temperature (a) UV-vis absorbance and (b) PL spectra of the perovskite layer.

This research was supported by the Basic Science Research Program through the National Research Foundation of Korea (NRF) funded by the Ministry of Education, Science, and Technology (NRF-2019R1A2C1086813).