Quadruply bonded chromium (II) acetate coordinated with axial ligands was synthesized in gram scale by ligand vapor diffusion, where vaporphase ligands diffuse onto the surface of anhydrous chromium (II) acetate crystals without dissolution. The product was obtained in gram scale with nearly 100 % yield, with the size of each crystal being comparable to previous reports. Powder X-ray diffraction studies confirmed the high purity of the product. The reaction mechanism was scrutinized by changing the amount of ligand inside the reaction vessel and the reaction time. As a new, simple route for ligand coordination by simple diffusion of vapor, this new method would contribute to fundamental studies and application of various complexes and materials with desired ligand coordination.

Quadruple bonds between transition metals are one of the most intriguing topics in chemistry [1]. This unique type of bond contains δ bonds that are formed by the overlap of orbitals of adjacent transition metal centers. Because the overlap of the orbitals are not as significant as or orbitals, it requires an ultrashort distance between the metal atoms that results in a very narrow energy gap between the HOMO (highest occupied molecular orbital) and the LUMO (lowest unoccupied molecular orbital). Also, these quadruply bonded complexes prefer an eclipsed configuration of the ligands because of angle sensitive δ bonds. Therefore, they often leave room for the coordination of additional ligands at their “axial” positions, which significantly affects the chemical nature of quadruple bonds [2–4]. 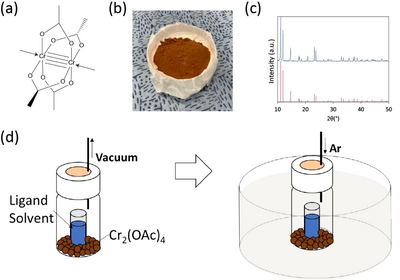 We propose a new, gram-scale synthesis method called ligand vapor diffusion (LVD) to synthesize high-quality chromium (II) acetate with axial ligands, where anhydrous chromium (II) acetate crystals are exposed to vapor-phase ligand without dissolution. LVD achieves gram-scale synthesis of the compound within 6 h without degassing of the solvent with nearly 100% yield. This makes LVD more convenient and less time-consuming than the previous method, which requires degassing of the solvent and anaerobic conditions for the crystallization. The quality of the product obtained by LVD is still comparable to that of the previous method, with high crystallinity and purity as shown by powder X-ray diffraction (PXRD).

Anhydrous chromium (II) acetate was prepared according to literature [10]. For LVD, a small cylindrical vessel (4 ml) was placed inside a large cylindrical vessel (20 ml). The inner vessel was filled with 3 ml of target ligand (such as water, methanol, and pyridine). It was then kept open without any cover during the reaction [Fig. 1(d)]. Note that while water and pyridine can be used with pre-treatment, methanol should first be dehydrated with a molecular sieve. Anhydrous chromium (II) acetate was placed in the outer vessel. The outer vessel was then sealed with a cap. It was first evacuated and then filled with Ar, and this process was repeated at least three times to completely remove redundant gas. Then, Ar gas was continuously supplied into the vessel during the reaction. The whole vessel was immersed in a heating bath, and the temperature was maintained just below the boiling point of each target ligand. After 5 h for other ligands and 4 h for methanol, the vessel was slowly cooled to room temperature. The cap of the outer vessel was then removed, and the inner vessel was taken out. The powder in the outer vessel was carefully collected and dried. The specimen was kept in Ar (for L = methanol) or in vacuum (otherwise) for storage. All the measurements were performed in ambient conditions. A Powder X-ray diffractometer (Rigaku Ultima IV) was used to analyze the crystal structure of the specimen, using CuKα radiation. The diffraction study was conducted in ambient conditions without any evacuation or sealing process.

Anhydrous chromium (II) acetate was prepared according to literature [Fig. 1(b)] [10]. As shown by the powder X-ray diffraction pattern, the quality of anhydrous chromium (II) acetate is comparable to the literature [Fig. 1(c)]. The configuration of the reaction vessel for LVD is shown in Fig. 1(d). Water, methanol, and pyridine were used as the target ligands for LVD. After cooling the reaction vessel, the samples were collected and dried to remove condensed ligand vapor formed during the cooling process. The color of each specimen is different from that of anhydrous chromium (II) acetate [Fig. 1(b), Fig. 2(a)-(c)]. Note that unlike the water-coordinated or pyridine-coordinated complexes, the methanol-coordinated complex was susceptible to air exposure and prolonged evacuation but was stable in an Ar environment. 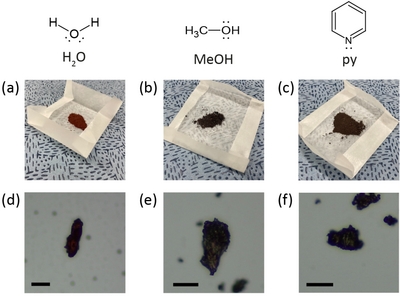 To analyze the morphology of the products, optical microscopy was used as shown in [Fig. 2(d)-(f)]. The size of the specimens was roughly 50 to 100 μm in diameter, which is comparable to the previous report. Powder X-ray diffraction was used to analyze the crystal structure and the composition of the product, as shown in Fig. 3. The measured diffraction patterns were identical to those of the previous reports. There were no signs of byproducts or contaminants, such as oxidized forms of the compound or metallic chromium. This shows that even without degassing of the ligand solvents prior to LVD, all the reactions were properly completed without contamination or oxidation. This overcomes the limitation of the previous solution-based method, because even a small amount of oxygen dissolved in the solvent easily oxidized the whole solution [9]. The estimated yields were near unity ( 97% for water, 95% for methanol, and 97.1% for pyridine), and these values are substantially higher than the previous report, which is approximately 10% [9]. Considering the unnecessity of any degassing process as well as the high yield of the products, we believe that this process is a remarkable improvement on the previous solution-based process. 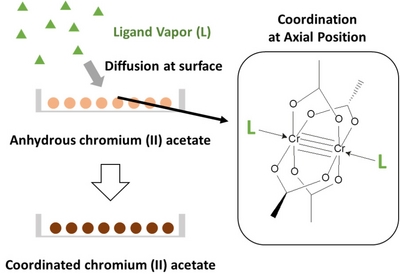 We synthesized chromium (II) acetate with ligands by the ligand vapor diffusion (LVD) method. This new method features degassing-free, high-yield, gram-scale synthesis of chromium (II) acetates coordinated with various ligands. This proves that this new method is superior to the previous solution-based method, which requires a degassing process and has poor yield. This gram-scale preparation of chromium (II) acetate with diverse ligands can be expanded to other complexes and ligands, which will contribute to fundamental studies and applications of ligand-dependent tuning of materials. We believe that our findings would contribute to various fields of science and engineering by illuminating a new way to control the properties of solid-state materials by simple surface treatment with diffusion of ligand vapor.

This work was supported by a Research Grant of Andong National University.