Position Dependent Resistance and Doping Condition on a Graphene Flake

In this work, we investigated the variation in surface conditions of graphene by employing atomic force microscopy and optical images. We inspected the resistance and doping at selected areas of graphene by transport measurements. Especially, the area with a dominant contribution from the edges, which have more disorders and poly (methyl methacrylate) residues compared to the central surface of graphene, showed large resistance as well as large doping concentration. Our study facilitated the understanding of the electric conditions on graphene surface and edge areas.

Graphene, a two-dimensional carbon atom network, has been studied for applications in transparent and flexible electrodes. In particular, the formation of high-quality and large-size graphene with perfect carbon crystal is one of the major goals in research involving graphene [1–7]. Although the electric property of a graphene flake is characterized by measuring resistance and accumulated carrier density, these values are averaged over areas with varying condition such as disorders, and residues on graphene flake. Thus, we should understand the role of disordered areas on graphene flake. Several studies have carried out the spatial investigation of graphene surface by employing a scanning probe microscope (SPM) [8,9,12]. However, since the characterization using SPM has limitations for inspecting the direct conductance of graphene, electron transport characterization is preferred for direct measurement of the conductance of graphene [8–12]. In this work, we study the electric properties of partial areas of graphene, primarily focusing on either the center or the edge, by electron transport characterization. We observe that the graphene channel with a large contribution from the edge area shows relatively high resistance and increased p-doping level, due to more disorders and Poly(methyl methacrylate) (PMMA) residues.

For measuring the resistance, graphene flakes were mechanically exfoliated on a 280-nm-thick SiO2 substrate and Cr/Au (5 nm/30 nm thickness) electrodes were used to make electric contacts, as shown in Fig. 1(a) [4–7]. For making the contacts with Cr/Au electrodes, PMMA was employed as a mask in the e-beam lithography process and this PMMA was removed by acetone solution after evaporating Cr/Au metal. Each thickness of graphene was confirmed by inspection using a commercial atomic force microscope (AFM, XE-100, Park systems Corp.) [8,9,12]. The resistance of graphene as a function of back-gate voltage (BG) through the SiO2 substrate was measured by the 2-terminal electron transport measurement [8–12].

Figures 1(b) and 1(c) show the AFM image and height profile between SiO2 and graphene, respectively. Here, the graphene is confirmed as a bilayer with a height difference of ~ 0.6 nm between graphene and SiO2 [see Fig. 1(c)]. On this clean surface of bilayer graphene, the charge-neutral position (CPD) was obtained at CPD ~ 74 V with ~ 8.28 kΩ that corresponds to the highest position (marked with dashed red arrow) in the transport curve plotted in Fig. 2. This bilayer is heavily p-doped with = ( BG/)ㆍ CNP ≈ 5.18 × 1012 cm-2, where BG = 12 nF/cm2, , and CNP represent capacitance for 280-nm-thick SiO2, the charge of an electron, and charge-neutral position of this bilayer graphene, respectively [8–12]. While disorders are not observed on the graphene surface, undesired residues attached to the edge of the bilayer graphene were found [marked with an arrow in Fig. 1(c)]. Generally, these residues are PMMA polymers, which are not removed during fabrication process for metal electrodes contacts and lead to hole doping in graphene. Since the bonds are terminated at the crystal edge, it contains more defects. Thus, PMMA residues are strongly bonded at the edges compared to center of the surface, which contains less amount of disorders. In order to understand partial electrical condition difference on the graphene flake, we employed one more graphene flake, which intentionally contains the undesired disorders as shown in Fig. 3. Figure 3(a) shows the optical microscope image of the graphene flake where the Cr/Au metal deposited area (marked with A) and the folded area (marked with B) are visible. Since Cr/Au electrodes contacts were also made on this graphene flake, there should be unremoved PMMA residues in the disordered region and the edges. Note that, if we had employed the high- temperature annealing process for removing PMMA residues during the device fabrication process, investigation of device performance under the influence of only the edge disorders would have been possible. To study the electrical properties of the partial area of the disordered graphene flake, we measured transport curves as a function of BG via various combinations of electrodes. Connections between electrodes 1 and 4, 1 and 2, 2 and 3, and 3 and 4 [number of electrodes marked in Fig. 3(a)], and the resistances ( (i,j)) between the electrodes on the graphene flake are illustrated with Fig. 3(b). 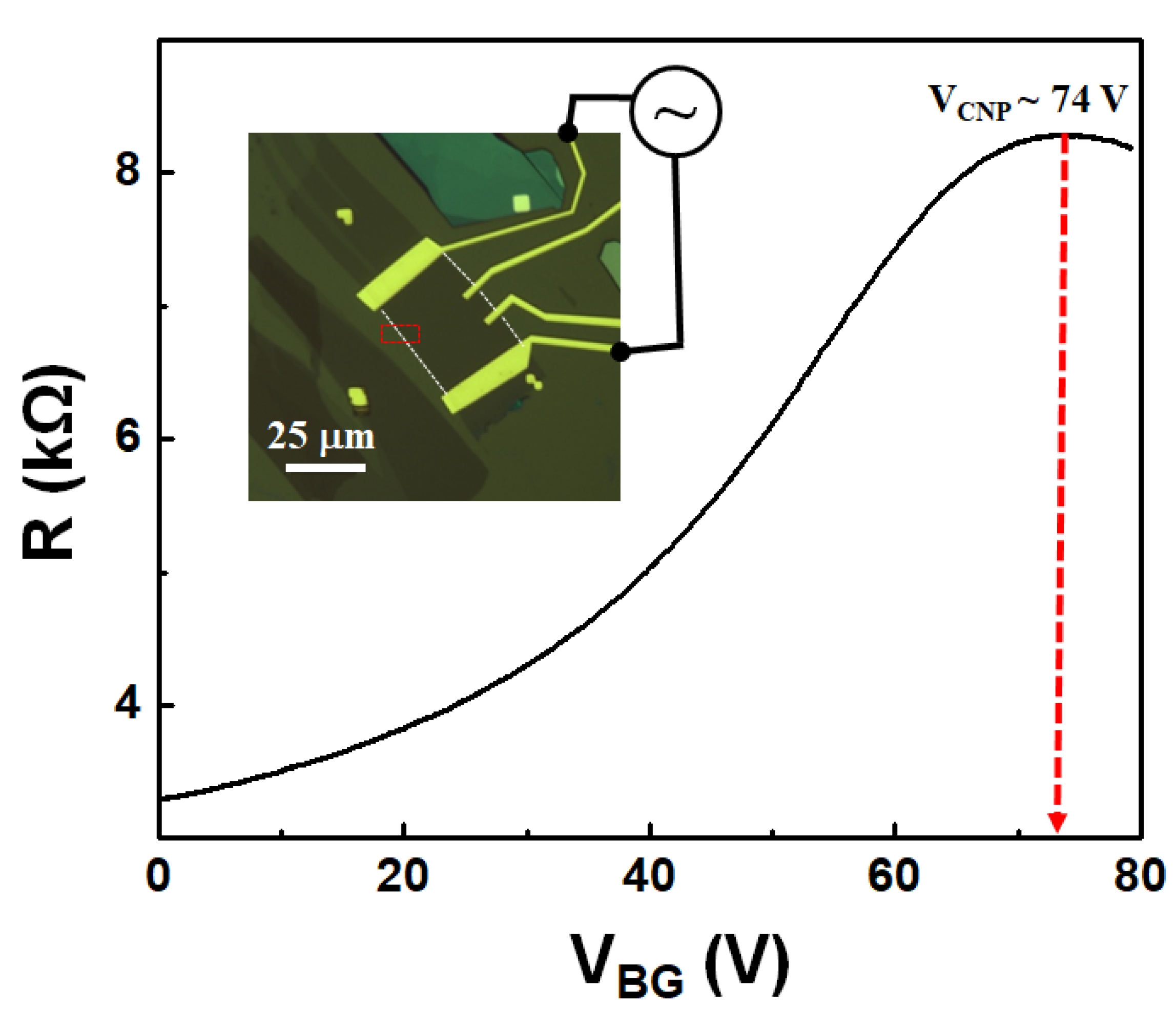 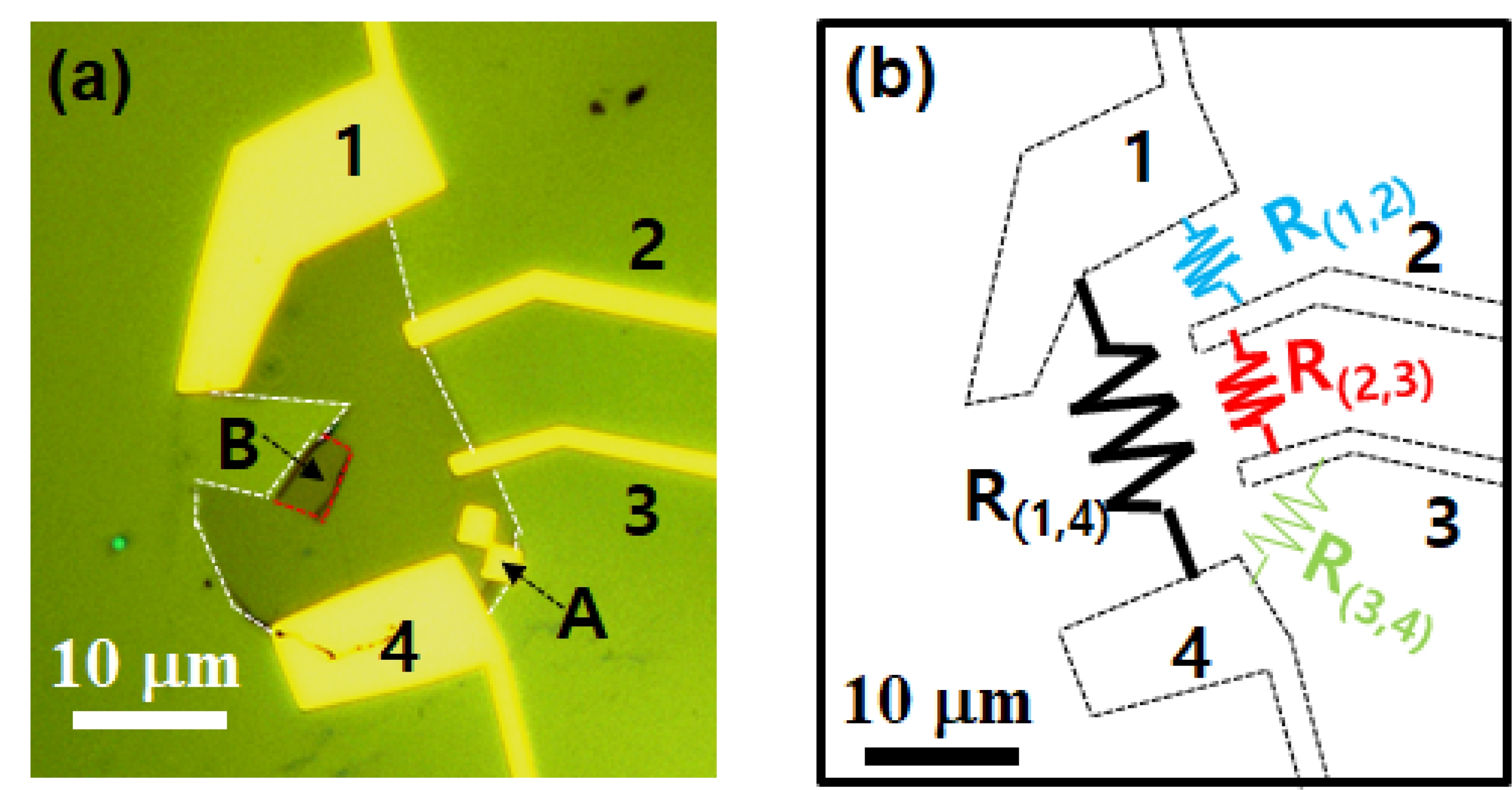 Figure 3. (a) Optical image of graphene FET with Cr/Au electrodes on the SiO2 substrate. (b) The schematic diagram for R(i, j) between i and j-electrodes.

In this work, we showed that the resistance and doping deviation in graphene depending on the position between the center area of the flake and the edge could be diagnosed by transport characterization. In particular, we observed that the edge leads to suppression of conductance and increased doping due to increasing disorders and PMMA residues, respectively. This result will help understand the origin of the difference in resistance and properties in different areas of graphene.