CoIn2S4. thin films were grown onto glass substrates by a spray pyrolysis method. For the growth, the substrate temperature was varied between 250 and 320 °C, and the spray rate was fixed at 6 ml/min. The grown thin films were characterized X-ray diffraction (XRD), field-emission scanning electron microscope (FE-SEM), and optical spectroscopy. The XRD analysis showed that the thin films grown at 320 °C were well crystallized in cubic spinel structure. The FE-SEM results demonstrated that the thin films have a uniform and homogeneous surface. The direct band gap energy was first obtained from the measurement of optical absorption spectra near the fundamental absorption edge at 292 K, and was founded to be 1.59 eV. We also observed two group absorption bands in the near-infrared region, which originate in cobalt ions of the constituent elements of CoIn2S4.. The absorption bands were well assigned as due to the crystal-field transitions of Co2+ ions occupying tetrahedral sites of the cubic spinel CoIn2S4. host lattice.

CoIn2S4, one of the type– 2 4 ( = Co, Mn, Fe; = Al, Ga, In; = O, S, Se), is a ternary compound semiconductor with potential application in optoelectronic devices [1–3]. CoIn2S4 is also expected as an interesting material with magnetic properties due to the cobalt constituent elements. It has been reported that the cobalt constituent elements of CoGa2S4 has an influence on the magnetic behavior [4]. In addition, the constituent transition metals or the doped transition metals in semiconductors introduce localized states such as sensitizing and luminescent centers in the forbidden band gap. These desirable properties make this compound useful materials for more applications in optoelectronic devices, such as the II1- M (M = Co, Fe, Mn, etc.) diluted magnetic semiconductors [5–7]. A few studies of CoIn2S4 have been made on the structural and magnetic properties of this material [8, 9]. Also, a few information of CoIn2S4 has been appeared in the systems of CoCd1− In2S4 [10], Co Zn1- In2S4 [11–14] CoGaInS4 [15,16], CoIn2S4 – CoIn2S4 [17], and CoIn2-2 Cr2 S4 [18]. However, there has been no information on band gap and optical properties of CoIn2S4. In addition, there has been no study yet on the influence of cobalt, a constituent element of CoIn2S4, on the optical properties of this material. In the previous work [19], we have studied the effects of cobalt constituent element in Co Cd1- Ga2Se4 mixed crystals on their optical properties. In order to further enhance the applicability of CoIn2S4, therefore, more information about the influence of cobalt constituent element including band gap of this material is needed. And the spray pyrolysis technique for the thin film growth of the material should be established. Among a variety of methods for thin film growth, the spray pyrolysis technique is used for several compound semiconductors because of a simple and low-cost method enabling large-area production with highly uniform [20].

In the present paper, we report on the thin film growth of CoIn2S4 by the spray pyrolysis technique. The grown thin films were characterized by X-ray diffraction and field-emission scanning electron micro-scope measurements. The band gap energy at 292 K was first obtained by optical absorption spectroscopy measurements. Also, we discuss the absorption bands observed in the near-infrared region, which are originated in cobalt ions of the constituent elements of CoIn2S4. These absorption bands are analyzed in connection with optical transitions of tetrahedral Co2+ ions in the CoIn2S4 lattice.

CoIn2S4 thin films were grown by the spray pyrolysis method [21]. A spraying solution was prepared by dissolving CoCl2 (GA, Alfa Products), InCl3 (5N, Alfa Products) and thiourea (GA, Alfa Products) in 1:1 solvent solution composed of methanol (Merck-Analysis) and distilled water to give 0.2 molar solutions of each solute. Then these solutions were mixed in a volume ratio of 1:2:4, and at the same time an excess thiourea solution of 20 % was added in order to compensate the loss of sulphur caused by vaporization during the deposition. The final mixture of the solutions was magnetically stirred at 70 °C for 30 min. Then this solution has sprayed on a slide glass (Corning-2948) with a fixed spray rate of 6 ml⋅min−1 under ambient air. The substrate temperature was varied from 250 to 320 °C for film deposition.

The structural properties such as surface morphology and layer thickness of the grown thin films were characterized by using field-emission scanning electron microscope (FE-SEM, Hitachi, S-4800), and their crystalline phases and qualities were studied by X-ray diffraction (XRD, X’pert pro MPD) measurements. Also, the band gaps of CoIn2S4 and the optical transitions of Co2+ ions were investigated by the measurements of optical absorption spectra in the wavelength region of 250 to 3200 nm at 292 K using a UV-VIS-NIR spectropho-tometer (Hitachi, U-3501).

Figure 1 shows the XRD patterns of the CoIn2S4 thin films depending on the substrate temperature. The XRD patterns for the thin films grown at 250 °C of Fig. 1(a) shows a broad and weak peak near 2θ angle of 20~30∘, which is considered to be typical of amorphous thin films. As the substrate temperature increases, the XRD peaks become intense. For the thin films grown at the substrate temperature of 320 °C, as shown in Fig. 1(c), the XRD pattern shows a lot of planes (111), (220), (311), (400), (511), (440), (531), (533), and (444) of cubic spinel, except for the diffraction peak with a relatively weak intensity at 2θ = 22.336 originated from In2O3. It is in good agreement with that in JCPDS 03-065-5369 for CoIn2S4 crystals. The strong and sharp diffraction peaks suggest that the grown thin films were well crystallized. Also, the FE-SEM micrographs of surface and cross-section of the CoIn2S4 thin films grown at 320 °C are given in Fig. 2. The result depicts that the morphological features of the CoIn2S4 thin films have almost a uniform and homogeneous surface, and a thickness of 1.90 µm. 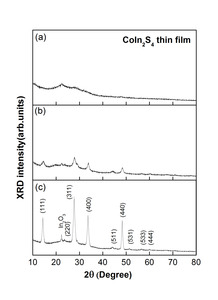 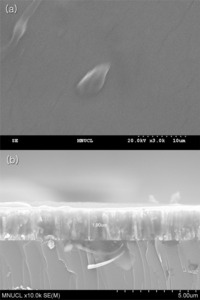 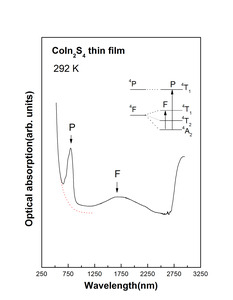 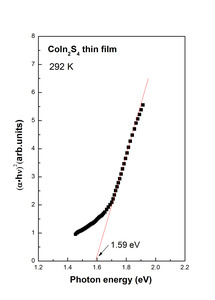 Table 1 . Observed absorption bands due to the transitions of tetrahedral Co2+ in CoIn2S4.. 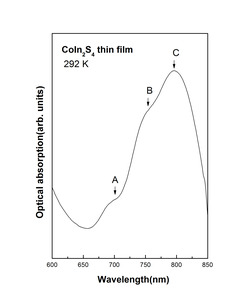 CoIn2S4 thin films have been successfully grown on a slide glass at an optimal substrate temperature of 320 °C and a spray rate of 6 ml⋅min−1 by the spray pyrolysis method. The XRD analysis revealed that the films grown at 320 °C are well crystallized in single-phase cubic spinel structure. The FE-SEM micrographs depicted that the films have a uniform and homogeneous surface.

The nature and the magnitude of band-to-band transitions of the CoIn2S4 thin films were determined from the optical absorption spectrum analysis near the fundamental absorption edge in which the absorption effect due to the cobalt ions of the constituent elements was extracted. The result gives the direct band gap of 1.59 eV. Also, the two absorption bands observed in the near-infrared regions, which are originated in cobalt ions of constituent elements, are well assigned as due to the crystal-field transitions of Co2+ ions with the tetrahedral sites of the CoIn2S4 lattice. However, our results due to only tetrahedral Co2+ are somewhat different from those due to both octahedral and tetrahedral Co2+ reported in reflectance spectra of CoIn2S4 for x = 1.0 of CoCd1− In2S4 crystals [10]. The origin of the differences in the results of each other is not clear at present. In order to clarify these results, further crystallographic studies on this material should be needed.

This research was supported by Research Funds of Mokpo National University in 2019.