Fluorocarbon (C7F14, C7F8) plasmas are investigated to verify their etching characteristics as an alternative etchant of SiO2 etch process because C7F8 and C7F14 precursors are expected to have low Global warming potentials. Comparing the etch results of C4F8, C7F14, and C7F8 plasmas, C7F8 provides the highest selectivity for etching SiO2 at a moderate etching rate of the three fluorocarbons. C4F8 and C7F14 plasmas show similar magnitudes of selectivity at the same O2 injection. O2 addition is used to control densities of carbon species and optimize etching conditions. From comparison of the species existing in the C4F8, C7F14, and C7F8 plasmas by the electron-emitting source, CF radicals and carbon atoms are important in determining the remarkable selectivity of C7F8 plasma. This understanding is verified using X-ray photoelectron spectroscopy analysis.

In the ultralarge-scaled integrated devices fabrication, as SiO2 etching process for manufacturing 3D semiconductor devices demands high aspect ratio and small feature size, etching characteristics such as high SiO2 etch rate and highly selective etch of SiO2 over Si3N4 or Poly-Si are getting more important. On the other hand, regarding the global warming problems, perfluorinated compounds (PFCs) like C2F6, C4F8, which are used as precursors for SiO2 etching process, generally have high Global Warming Potential (GWP) and been considered to raise greenhouse effect [1]. Therefore, it is important to develop an alternative etching process using low GWP precursor and showing competent etching properties compared with conventional SiO2 etch process.

In an effort to develop an alternative etchant with low GWP, C5F8 had been investigated to evaluate its etching performances as an alternative precursor for the SiO2 etch process [2, 3]. Because C5F8 has a double bond in its a cyclic-structure so that C5F8 shows shorter atmospheric lifetime and low GWP. Therefore, if C5F8 is effused from reactor without being dissociated in plasma, the C5F8 effused will not worsen global warming.

Considering the issues, C7F8 (octafluorotoluene) and C7F14 (perfluoro-methylcyclohexane) are investigated in this study as an alternative fluorocarbon precursor for C4F8 which is used conventionally in the industry. Although the values of GWPs of C7F8 and C7F14 are not calculated and are unknown, the C7F8 and C7F14 liquid precursors are considered to have same potential compared with C5F8 as an alternative fluorocarbon precursor regardless of GWP. As for the reason, from the fact that a portion of parent PFC is known to be effused out of chamber without being dissociated in the plasma, the liquid PFC effused can be condensed and retrieved easily [4, 5].

Using the C7F14 and C7F8 as liquid fluorocarbon precursors, the etch rate and the etch selectivity of SiO2 over resist are compared with C4F8 in the plasmas. Dissociative characterizations of the precursors were investigated using the quadrupole mass spectrometer (QMS) both in plasma process and plasma-off condition. This analysis method is enable us to interpret the etching characters of the liquid precursor.

For verifying etch characteristics of the precursors, a radio frequency (RF, 13.56 MHz) capacitively-coupled plasma (CCP) was used to etch SiO2 layer. The CCP chamber has a diameter of 34 cm and a height of 14.5 cm and the plasma was maintained between two parallel plate electrodes separated by 5 cm. During the etch processes, the RF power was pulsed at 500 Hz with a 50 % duty cycle at 300 W. The process pressure and substrate temperature were maintained at 20 mTorr and room temperature, respectively.

To measure the radical species in the plasmas, the ordinary quadrupole mass spectrometer system (SRS-200) was installed at the chamber. The radical species were extracted from the chamber through metallic tube (3.5 cm in diameter, 2 cm in length) and introduced to the sampling orifice of the QMS, which orifices was 0.1 µm in diameter. Operating pressure of the QMS was maintained bellow 1×10−6 Torr for being free from the collision of gases. Meanwhile, gases decomposed from the precursors using electron emitting source were measured by the another QMS (PSM, Hiden Analytical, England) which is capable of appearance potential mass spectroscopy (APMS) analysis.

In order to examine the etch rate and the etch selectivity of SiO2 over resist, profiles of SiO2 layer etched in the plasma were examined by field emission scanning electron microscopy (FESEM, S-4800, Hitachi, Japan). To measure the plasma density, a cut-off probe was used [8, 9], which was placed at center of the chamber. And using an oscilloscope installed at bottom electrode, self-bias voltage was measured.

Figure 1(a) shows the etch rates of SiO2 and Fig. 1(b) shows etch selectivities of SiO2 over poly-Si as a function of O2 flow rate, which are processed in the C4F8, C7F14, and C7F8 plasmas. It is known that carbon and fluorine arrived at etching surface form fluorocarbon film and etch SiO2 film by reacting with Si and oxygen of the surface, but, if the carbon and fluorine arrive to the surface with so large flux and form a thick film, etch rate will be decreased and etch reaction can be stopped [7]. Therefore, controlling the thickness of fluorocarbon on surface is a main method to optimize etch processes [10]. On this understanding, the etch rate and the etch selectivity were investigated at various oxygen flow rates for comparison between the optimal conditions of the C4F8, C7F14, and C7F8 plasmas. 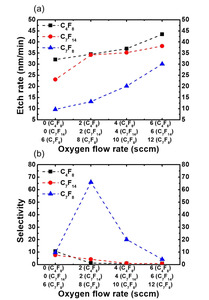 In order to explain the differences between the etch properties of C4F8, C7F14, and C7F8 shown in Fig. 1, it can be analyzed in two aspects. First, the electrical properties of plasma enable to affect etch characteristics can be examined. Flux and density of ions arriving the surface of substrate are related with the electrical property of the plasma such as self-bias voltage of plasma and plasma density. In this regard, electron density and self-bias voltage were analyzed. 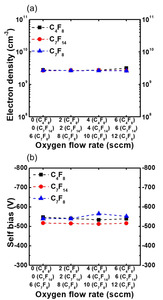 The differences among the etch properties of the C4F8, C7F14, and C7F8 plasmas shown in Fig. 1 can be analyzed in another aspect. Second, plasma species were analyzed by the quadrupole mass spectrometer (QMS). Figure 3 shows (a) C, (b) CF, (c) CF2, (d) CF3, and (e) F radical densities measured by QMS under the same conditions used to obtain the data in Fig. 1. 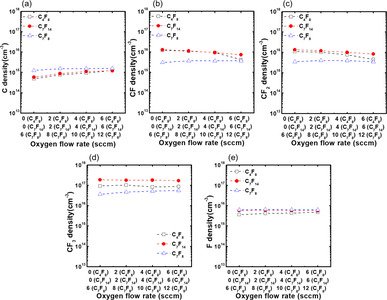 The results, like above mentioned, in which tendencies of etch properties were not consistent with changes of CF density measured by QMS are also found in the other report [11]. This is because radical density measured by QMS during plasma process does not represent the information about the species arriving the surface, but represent the species existing in the plasma. Plasma state is normally determined by reactions between species like electron, ion and neutral and by the interaction between the species and solid surface after plasma is initiated by electron impact ionization. Therefore, so as to elucidate plasma state and the etch result accurately, it will be necessary to distinguish the species arriving the surface from the species existing in the plasma. 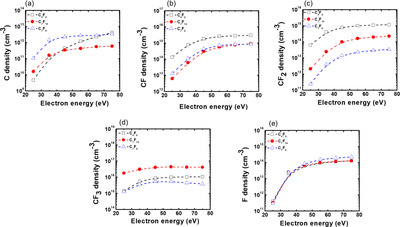 Figure 5 shows the (a) C, (b) CF, (c) CF2, (d) CF3, and (e) F radical densities measured at various electron impact energies using a QMS after C4F8, C7F14, and C7F8 are dissociated using an electron-emitting source [14, 15]. In this study, because the filament is used only for gas dissociation, the angle of the electron beam is not con-sidered and the gas is decomposed by the electron-emitting source of the ionizer in the QMS. For resolution and accuracy of the electron energy, the PSM apparatus was used, allowing APMS analysis.

In Figs. 5(b) and (c), the gases decomposed from the precursors show larger densities of CF than of CF2, while Figs. 3(b) and (c) show no significant differences between CF and CF2. According to the results, CF radicals are considered to be involved in the surface reactions and to have more influence on the etch process than CF2 radicals.

In Figs. 5(b) and (c), the gases decomposed from C4F8 show the highest densities of both CF and CF2, in agreement with Fig. 3. The C7F14 plasma shows lower CF2 radical density than the C4F8 plasma, but higher CF2 radical density than the C7F8 plasmas, which also agrees with Fig. 3(c). However, C7F8 plasma shows greater CF radical density than C7F14 plasma, which does not match the results of Fig. 3(b). This is considered to be related with the larger C-CF and CF peaks from the C7F8 results compared to those of the other precursor. It can be deduced that the CF radical is more important in determining the etching characteristics of the C7F8 plasma process than it is with C7F14.

On the other hand, in Fig. 5(a), the carbon atom density measured from dissociated C7F8 gas is one order of magnitude higher than that from the other precursors. This result indicates that the C7F8 plasma produces more carbon as carbon atoms, instead of fluorocarbons. It can be also inferred that the carbon atoms and molecules generated by the C7F8 plasma enhance the magnitude of selectivity, accompanying the noticeable formation of C-CFx bonds shown in Fig. 4(c).

Considering the compatibility of C7F14 and C7F8 as alternatives for C4F8, C7F14 plasma in the SiO2 etch process is expected to show etching characteristics similar to those of C4F8 plasma. The C7F8 plasma process shows a lower etch rate than C4F8 and C7F14. However, C7F8 plasma achieves remarkable selectivity with a moderate etch rate by adjusting the amount of carbon produced through applying the appropriate O2 flow rate. C7F8 plasma processing is therefore appropriate for high-aspect-ratio etching processes.

This research was supported by a National Research Council of Science & Technology (NST) grant from the Korean government (MSIP) (No. CAP-17-02-NFRI), by the Industrial Strategic Technology Devel-opment Program-Next Generation Semiconductor R&D (20010412, Development of Metal Oxide Carbon Layer Strip Process and Com-mercial Equipment for EUV Mask) funded by the Ministry of Trade, Industry & Energy (MOTIE, Korea), by the Korea Institute of Energy Technology Evaluation and Planning (KETEP) and the MOTIE of the Republic of Korea (No. 20172010105910), by the MOTIE (20009818, 20010420) and KSRC (Korea Semiconductor Research Consortium) support program for the development of future semiconductor de-vices, by a Korea Institute for Advancement of Technology (KIAT) grant funded by the Korean government (MOTIE) (P0008458, The Competency Development Program for Industry Specialist), and by the Basic Science Research Program through the National Research Foundation of Korea (NRF) funded by the Ministry of Education (NRF-2020R1A6A1A03047771).