Perfluorinated compounds (PFCs), including sulfur hexafluoride (SF6), are used as insulating gases for heavy electric equipment, and are green-house gases with a very high global warming potential. For the thermal decomposition of greenhouse gases, a high temperature of 3,000 K or more and a technology to prevent recombination of the decomposed gases are required. A direct current plasma arc with a flame temperature of 6,000 K or higher provides an effective ultra-high temperature for the decomposition of chemically stable PFCs. A large amount of CaO, which is a raw material for clinker, is in the cement kiln, hence the S and F radicals decomposed from SF6 react with CaO to quickly convert it to CaF2 and CaSO4 and prevent their recombination. Therefore, the convergence technology of plasma and cement kiln is known as an effective method for treating PFCs. However, the interior of the cement kiln causes erosion of the plasma torch due to the turbulent flow of a large amount of combustion air at a high temperature of 1,500 °C or more, and the scattering of the raw material particles of the clinker, which greatly affects the operation stability. In this study, a plasma torch was developed that can maintain stable plasma in a vulnerable environment and effectively decompose PFCs. Moreover, the design and results of the experiment on the torch were presented to enable stable plasma operation for a long time in vulnerable environmental conditions through durability, plasma efficiency, and analysis of the discharge characteristics.

Perfluorocompounds (PFCs), which are used as semiconductor process gases and insulating gases for power devices such as transformers, have a very long period of decomposition in the air. They are also known as representative greenhouse gases with a global warming potential (GWP) that is thousands to tens of thousands of times higher than that of CO2 [1,2]. Reducing greenhouse gases to mitigate global warming is the most urgent task of the international community. Moreover, unlike the Kyoto Protocol, which obligates only developed countries to reduce greenhouse gases, the 21st Paris Convention on Climate Change (COP21) in 2015 imposed such an obligation on all 195 parties involved in the convention. Further international efforts have been made to preserve the global environment, with the 17 Sustainable Development Goals laid out at the Climate Change Conference in Madrid, Spain, in December 2019 to implement the 2015 Paris Agreement [3, 4]. However, despite these regulations, PFCs are still gradually increasing with industrial development due to their inertness, nonflammability, and nontoxicity [5]. The US Environmental Protection Agency predicted that global fluorine-based gas emissions will gradually increase and reach 15.157 billion tons by 2030 [6]. In addition, according to the Republic of Korea’s 2019 National Greenhouse Gas Inventory Report, the country’s CO2 emissions have increased 2.6 times since thets SF6 emissions have increased 38 times, and its PFC emissions have explosively increased 7700 times. The GWP of PFCs is very high compared to that of CO2 [7]. As for SF6, its lifetime is about 3,200 years, its GWP is 23,900, and it is predicted to continuously contribute to increased global warming. Table I shows the lifetime and the GWP of representative PFCs [8].

Clearly, effective treatment of such greenhouse gases is urgently needed. Technologies such as a separation and recovery method through chemical adsorption, a catalyst method, and a decomposition and removal method using a combustion method have been studied for many years [9–13]. However, these methods have problems such as high treatment cost, low throughput, and generation of secondary pollutants such as side reactants and liquid wastewater. In particular, decomposed gases are not recognized as high-capacity processing technology because of the problem of reduced processing efficiency as they are recombined. Meanwhile, the PFC treatment technology that combines high-temperature plasma and a cement kiln can be as an effective method for overcoming these shortcomings. In the high-temperature plasma, the temperature of the plasma jet is 6,000 K or higher, hence a high-temperature environment can be created that can sufficiently decompose PFCs. A large amount of CaO, a raw material of clinker, exists in the cement kiln at a temperature above 1,500 °C and reacts chemically with the decomposed S and F components until they are converted into CaF2 and CaSO4, thereby preventing their recombination and achieving high processing efficiency [14]. However, the internal environment of the cement kiln is problematic due to high temperatures and very strong turbulence caused by high levels of anthracite combustion gases, dust generated from clinker raw materials, and the HF generated during the conversion of CaF2 and CaSO4, resulting in unstable discharge or shorter electrode replacement cycles. Therefore, a torch design must be developed that can secure the stability of the application of the plasma torch to the cement kiln. In this study, to effectively treat a large amount of PFCs, a triple-designed plasma torch was developed that can be installed in a cement kiln and used for a long time. The developed plasma torch was installed in a cement kiln, and the discharge was evaluated. An experiment to predict the lifespan was carried out. To secure the stability of the plasma torch, a preserve nozzle was installed at the end of the anode nozzle that prevented foreign substances from entering the plasma nozzle, thereby effectively stopping the erosion of the nozzle. The PFC was supplied to the center of the plasma torch and mixed with the air current of the plasma jet generated from the triple torch to achieve effective decomposition. Nitrogen was used as the plasma discharge gas so that its rotation and supply would prevent the bias of the plasma arcs. Nitrogen also mediated heat transfer to the PFC, which was injected simultaneously, enabling an effective decomposition reaction for low-power operations. A protective metal cover was installed on the exterior of the plasma torch, which also prevented electrical hazards to the cathode and anode power cables. By developing plasma torch design, this study presented a plasma torch that can be used for a long time to stably generate and maintain plasma in various industries without being affected by the surrounding environment.

Figure 1 shows the design drawings and the manufactured photos for the design of the triple thermal plasma torch developed in this study. The internal design of the plasma torch consisted of a cathode made of tungsten and an anode made of copper. The anode was connected to the outer housing, and the inside of the housing was filled with an insulating material made of polymer. Each plasma torch was integrated with a support composed of the front and back, and the PFC came out to the center where three plasma jets were ejected and decomposed through contact with the plasma. The plasma jet was ejected at speeds of more than 400 m/s at a reduced gas density due to high temperatures of about 6,000 K. At this time, local pressure differences around the plasma torch decompose foreign substances such as crinker dust and non-ferrous coal around the nozzle, and HF generated during conversion to CaF2 and CaSO4 enters the anode nozzle, causing erosion and acceleration of the anode nozzle. To prevent foreign substances from entering the anode nozzle, preserve nozzles were applied to the tip of the anode nozzle, as shown in Fig. 1. The preserve nozzle materials require high heat resistance to withstand high plasma temperatures; and as tungsten has a high strength and a melting point of 3,400 °C, it is the most heat-resistant metal in existence, but it is easily damaged by hot-shortness. Therefore, molybdenum was used as its replacement metal [15–17]. The melting point of molybdenum is 2,610 °C, and it is known to have high heat and corrosion resistance. The plasma torches developed in this study were mounted on cement kilns to treat the PFC and evaluate the operation. Figure 2 shows a schematic diagram of the cement kiln and plasma torch systems used in this experiment. The cement kiln used was the No. 6 Kiln of Sung-shin Cement Co., Ltd., located in Maepo, Danyang, Chungcheongbuk-do. The waste gas used was the PFCs recovered from waste transformers. The plasma power system (PS20, Dawonsys) was operated at an output of 20 kW, and the dischargers supplied 100 L/min of nitrogen gas per torch. To observe the voltage–current/discharge characteristics of the plasma, an oscilloscope (DPO 4054, Tektronix), current probes (TCP-404XL, Tektronix), and voltage probes (DP-50 and PIN-TEK) were connected to the torch. To calculate the thermal efficiency calculation of the plasma torches, the flow rate of the cooling water supplied to the torches was measured, as were the temperatures of the cooling water inlet and outlet. The thermal efficiency of the plasma torches was calculated using the equation,

Figure 1. (a) 2D cross-sectional view of the nozzle part of the torch with or without the preserve nozzle. (b) 3D modeling of the triple plasma torch. (c) Triple plasma torch manufactured by the design drawing. 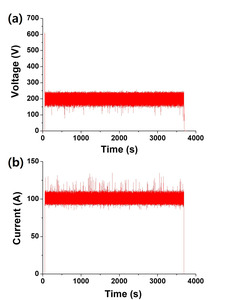 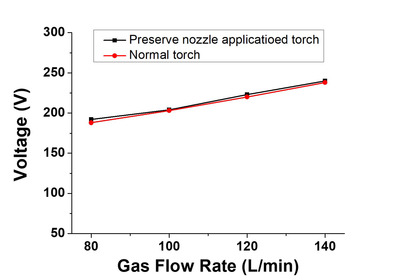 Figure 5. Voltage by flow rate of electric discharge gas depending on whether or not preserve nozzle is applied.

This project is supported by the "R&D Center for reduction of Non-CO2 Greenhouse gases (2017002430004)" funded by Korea Ministry of Environment (MOE) as "Global Top Environment R&D Program".