Organic–inorganic halide perovskites have been extensively studied for applications such as light-emitting diodes, photodetectors, and laser diodes owing to their superior optoelectrical properties such as low exciton binding energy, high absorption coefficient, and high charge carrier mobility [1–5]. In particular, they are leading the next-generation solar cell market, with the power conversion efficiency exceeding 25% [6]. Most of the high-efficiency perovskite solar cells are manufactured using an antisolvent treatment method by solution process; however, the results vary not only in terms of the type of antisolvent used, such as diethyl ether, chlorobenzene, and toluene, but also in terms of the processing condition employed (volume and time) [7–9]. In our previous study, we applied ethyl acetate (EA) as an antisolvent and demonstrated that it was the most suitable antisolvent for forming a compact perovskite film without pinholes in the ambient condition and with high reproducibility, while enabling a three times higher power conversion efficiency compared to when diethyl ether was used [10].

Tin-doped indium oxide (ITO) substrates (8 Ω/sq, AMG) were sequentially and ultrasonically cleaned with isopropyl alcohol (10 min) and acetone (10 min), and the cleaned substrates were exposed to ultraviolet (UV)-ozone for 15 min. For the preparation of the electron transport layer, 15 wt.% SnO2 aqueous dispersion (Alfa-Aesar) was diluted in the same weight ratio as deionized water. The diluted dispersion was spin-coated at 5000 rpm for 30 s and then annealed on a hot plate at 150°C for 30 min. Before depositing the perovskite solution, the SnO2 layer was treated with UV-ozone for 15 min.

For the CH3NH3PbI3 (MAPbI3) perovskite precursor solution, we used the same process as previously reported [10]. Briefly, a 1.49 M MAPbI3 precursor solution was spin-coated on a SnO2 layer at 4,000 rpm for 30 s, and EA of different volumes was applied 8 s after the program started. The antisolvent was applied at the same dispensing rate using an automatic dispensing pipette (E3, Eppendorf) for a reliable quality of the fabricated perovskite film. To calculate the application time based on the volume of EA used in the experiment, the time for completely dispensing 5 mL of EA at the same speed was measured 10 times, and the average value was obtained by dividing with the volume used. The dispensing times based on the calculated volumes were 0.15 (100 µL), 0.45 (300 µL), 0.75 (500 µL), and 1.05 s (700 µL). After the program was finished, the product was annealed at 100°C for 2 min. All spin coating processes were performed in an ambient atmosphere (room temperature ~20°C, relative humidity ~40 %).

PL and TRPL measurements were performed to investigate the optical properties of the perovskite film in terms of the volume change in the applied antisolvent. Figure 2 shows the PL spectra of the MAPbI3/ SnO2/ITO films with different volumes of the antisolvent applied at room temperature (293 K). The PL peaks of all the samples appear at approximately 774 nm; however, there is little difference in the PL intensity. The PL intensity is known to increase with a decrease in the number of defects on the surface, because of the reduced area of the perovskite grain boundaries [16]. On the other hand, it has been reported that the diffusion length of carriers decreases as the grain size decreases, consequently increasing the radiative recombination due to an increase in spatial confinement [17]. Therefore, it is difficult to distinguish the change in the PL intensity in our perovskite film because it includes both the decrease in the grain size and the complexity of pinhole generation. Moreover, the effect of transport of the carriers generated in the perovskite to the electrode through the electron transport layer due to the deposition on the SnO2 layers cannot be neglected. 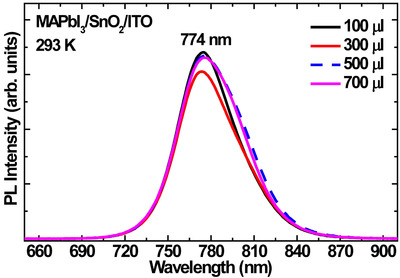 To clearly distinguish these complex changes in carrier dynamics, TRPL measurements were performed. For all the samples, the PL decay curves were measured at the same PL peak position. The PL lifetime and amplitude of each fast and slow component were obtained through a binomial exponential function fitted for the measured PL decay curves, and the average PL lifetime was calculated using the equation [18]. As illustrated in Figs. 3(a) and 3(b), the PL decay becomes slower with the increase in the applied volume of the antisolvent, and the corresponding average PL lifetimes are 55.7 (100 µL), 58.2 (300 µL), 60.2 (500 µL), and 85.3 ns (700 µL). This phenomenon is related to the increase in the number of pinholes generated in the perovskite film with increasing volume of the applied antisolvent. In the case of the sample with the smallest amount (100 µL) of antisolvent applied, a uniform perovskite film without pinholes could be obtained. To exclude the extraction effect of the photogenerated electrons by the SnO2 electron transport layer, the PL and TRPL results of the MAPbI3 film deposited directly on the glass substrate are shown in Figs. 4(a) and 4(b). All the samples show similar PL intensities, except for the 100 µL sample, which shows about half the intensity compared to the others. The weak PL intensity of the 100 µL sample can be attributed to the incomplete phase transition from the perovskite intermediate phase to the perovskite phase given the low volume of antisolvent used. The average PL lifetime obtained from the PL decay curves in Fig. 4(b) is the fastest for the 100 µL (59.8 ns) sample, the slowest for the 300 µL (93.7 ns) sample, and gradually becomes faster as the antisolvent application volume increases from 500 (84.4 ns) to 700 µL (71.5 ns). The fast decay of the 100 µL sample can be explained by the deterioration of the perovskite film due to the incomplete extraction of the host solvent, DMF. On the other hand, the decrease in the PL lifetime with increasing antisolvent volume can be explained by the generation of defects due to the increase in the number of pinholes. Although it has indistinguishable PL intensity from the other samples, it shows the possibility of manufacturing a high-efficiency perovskite solar cell device by enabling a fast lifetime owing to the favorable electron transport unaffected by pinholes. Therefore, when using EA as an antisolvent, it is possible to deposit a high-quality perovskite film by applying an appropriate volume of the antisolvent. However, it should be noted that the original function of the antisolvent may not be achieved if the applied volume is too low. 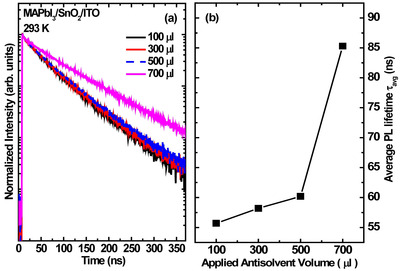 Figure 3. (a) PL decay curves and (b) average PL lifetime of perovskite films prepared with antisolvent of different volumes.

Figure 4. (a) PL spectra and (b) PL decay curves of perovskite films on a glass substrate.

This research was supported by the Basic Science Research Program through the National Research Foundation of Korea (NRF) funded by the Ministry of Education, Science, and Technology (NRF-2019R1A2 C1086813). Time-resolved photoluminescence measurements were performed at the Central Laboratory of Kangwon National University.

The authors have no conflict of interest to declare.