This is an Open Access article distributed under the terms of the Creative Commons Attribution Non-Commercial License(http://creativecommons.org/licenses/by-nc/3.0) which permits unrestricted non-commercial use, distribution, and reproduction in any medium, provided the original work is properly cited.

Recently, several excellent single-photon sources (SPSs) with high brightness, high indistinguishability, and high single-photon purity and made of a self-assembled semiconductor single quantum dot (SQD) have been reported [1–5]. Consequently, these SPSs have been adopted into system research, for example, in boson sampling and multi-photon interference; thus, devices with greatly improved performances have been developed [6–9]. For these applications, as well as quantum key distribution, linearly polarized single photons are critical [9,10] because the applications utilize single photons of the same polarization or superposition of two orthogonal linearly polarized single photons. However, self-assembled quantum dots (QDs) exhibit almost no polarization preference in the plane of emission because of their circular shape. Thus, specific polarization from the generated single photons has been selected with a linear polarizer for these applications, which results in an unavoidable brightness loss of ~50%.

Two representative methods to generate linearly polarized single photons have been developed. The first approach involves high-Q microcavity pillars with an elliptic cross-section, which have shown excellent selectivity for linearly polarized single photons [5,11–13]. However, because they utilize spectral separation of two orthogonal polarization modes, their operating bandwidths are very narrow, making resonance matching with SQD emission difficult. Another approach involves using an elliptic photonic nanowire with a single optical mode configuration to polarize photons in the elliptic major axis [14]. Although photonic nanowires provide good selectivity with a broad bandwidth, the length of the minor axis is only 129 nm, which makes positioning of the QD difficult and may cause reliability problems.

In this letter, we present a novel method for the manipulation of polarization of QD emission using a simple elliptic mesa structure to resolve the aforementioned difficulties. The mesa has an elongated cylindrical shape with a diameter of a few hundred nm and a height of 630 nm. Ninety-one percent of the QD emission linearly polarized along the major axis can be achieved for an elliptic mesa with a minor axis diameter of 300 nm (300 nm mesa). The structure has multiple modes in the plane; however, the fundamental mode, which is the major axis polarization mode, is designed to be dominant over the mesa plane, especially near the central region. With the recent trend of deterministic QD fabrication, a high degree of polarization can be easily achieved. The proposed structure has additional advantages such as a broad bandwidth and easy fabrication.

Figure 1 shows a schematic of the mesa structure we investigated. The QD layer in the mesa was positioned 150 nm below the top surface of the GaAs, and the height of the fabricated elliptic mesa was 630 nm. The aspect ratio between the major and minor axes of the elliptic mesa was maintained at 2:1 for minor-axis diameters of 300 and 500 nm. The aspect ratio was chosen to satisfy the number of QDs in a mesa and linear polarization property reasonably at the same time. 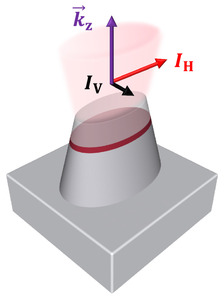 Figure 1. Schematic of an elliptic mesa structure used in simulations. The light is normally incident on the mesa. IH indicates the light intensity polarized along the long axis.

The degree of linear polarization (DOLP) for an elliptic mesa is defined as follows:


where () represents the photoluminescence (PL) intensity when the polarization direction is parallel (perpendicular) to the major axis of the elliptic mesa.

A finite-difference time-domain (FDTD) simulation was performed using the FDTD solutions (Lumerical Inc.) software to calculate the electric field distribution in the QD layer in the mesa. The material index of GaAs was taken from Palik [15]. A plane wave with polarization parallel or perpendicular to the major axis of the mesa was normally incident on the top surface. The electric field distribution in the QD plane was obtained using a field monitor positioned at that plane. The center wavelength of the simulation was set to 915 nm with a bandwidth of 200 nm. The simulation size was 2.5 µm in all directions, and the mesh size inside the structure was fixed at 5 nm. A periodic boundary condition was employed for lateral directions, and a perfectly matched layer was used for the -direction.

The lengths of the minor and major axes were chosen to be 300 and 600 nm, respectively. The height of the mesa was 630 nm, and the side-wall angles were 10° for the 300 nm mesa and 13° for the 500 nm mesa, which were obtained presently by etching. The elliptic mesas have two structural configurations: one in which the major axis of the mesa is aligned perpendicular to the intrinsic elongation direction of the QD, (Fig. 1), and one in which it is aligned parallel. Labels V and H in the figure indicate the alignment of the linear polarizer.

To understand the behavior of the DOLPs of QD emission, we calculated the electric field distribution in the mesas using FDTD simulations. The QD emission intensity in the structure follows Fermi’s golden rule: [16]


where ρ(ωQD) represents the local density of states, is the dipole moment of the QD, and is the horizontal (vertical) component of the electric field at the QD position in the mode. In the elliptic mesa, the magnitude of the electric field differed between two orthogonal polarizations; so, the polarization of the QD emission can be controlled by adjusting the mesa geometry. Eqs. (1) and (2) indicate that the effects of structural geometry on the polarization of QD emission (DOLPstructure) can be extracted from the total DOLP, where DOLPstructure is expressed as follows [16]:


Here, the field intensities at each mode, and , were calculated from the electric field distribution in the QD layer. A DOLPstructure value approaching +1 (−1) indicates that the polarization of QD emission is parallel (perpendicular) to the major axis of the mesa.

The calculated field intensities in the QD layer and the resulting DOLPstructure in the mesa are shown in Fig. 2. The red area, indicating a large DOLPstructure, is apparently wider at the central region in the 300 nm mesa than in the 500 nm one. Therefore, emission from the 300 nm mesa will be more linearly polarized and more tolerant toward the uncertainty in the QD lateral position in the mesa. Furthermore, the DOLPstructure distribution is not uniform over the QD plane in the mesa, which predicts the spread of the DOLPs in the mesa due to the different QD positions at each mesa. The 500 nm mesa is large, resulting in more optical modes over the QD layer. In this case, the fields in the mesa have different polarization values at different positions, as shown in Fig. 2. As the elliptic mesa size decreases, the fundamental mode polarized along the major axis becomes dominant and concentrated in the center region of the mesa, which enables more linearly polarized QD emission. In addition, correct positioning of the QD at the high DOLPstructure area in the mesa (i.e., near the center) is important for achieving a high DOLP in emission. Thus, the DOLP of single photons from an SQD can be further enhanced by reducing the mesa size and by precisely positioning the QD at the mesa center using PL mapping [17] or PL imaging [18] techniques.

Figure 2. Field intensity distribution on the QD layer in the mesa and the resulting DOLPstructure for the 300 and 500 nm mesas.

We proposed a novel method to generate linearly polarized single photons using a moderate-size elliptic mesa with an SQD. The FDTD simulations showed that a major-axis polarization mode is dominant over the mesa plane, particularly in the central region, for an elliptic mesa with a 300-nm-long minor axis, predicting more linearly polarized emission along the major axis. The maximum expected DOLP from an elliptic mesa is 0.82 for the 300 nm mesa, which indicates that 91% of the emitted light is linearly polarized along the major axis of the mesa. The precise positioning of an SQD in the mesa and the proper reduction of mesa size can further enhance the DOLP characteristics of the elliptic mesa single-photon source. The presented elliptic mesa, which is easy to fabricate and exhibits good performance, is a candidate for use in a linearly polarized single-photon source, which is necessary for quantum information systems, including boson sampling and quantum key distribution.

The authors acknowledge the technical contributions of Jindong Song, Sui Yang, Xiang Zhang, and Alex Possberg. This work was supported by the research fund of Chungnam National University.