Titanium dioxide (TiO2) is a desired material for visible light applications owing to its relatively low absorption coefficient and high refractive index compared to those of silicon dioxide (SiO2) and silicon nitride (Si3N4), which are standard CMOS-compatible materials. Since the recent emergence of metasurfaces operating in the visible region, the dry etching of TiO2 has become crucial for fabricating nanostructures with subwavelength scales. In this study, we investigated dry etching conditions for the fabrication of TiO2 nanorods with vertical sidewalls while changing the gas combination of Ar/Cl2 and Ar/BCl3 and adding HBr in small amounts. By measuring the sidewall angle of TiO2 nanorods etched under several etching conditions, we determined a suitable etching condition to form a sidewall with an angle of 89°.

In recent times, titanium dioxide (TiO2) has attracted attention as a desired material for fabricating electronic and photonic devices owing to its higher dielectric constant compared to those of silicon dioxide (SiO2) and silicon nitride (Si3N4), which are standard CMOScompatible materials [1–3]. The dimensions of electronic devices have been reduced to achieve a low power consumption and a high speed, and materials with high dielectric constants are required to reduce the leakage current of such devices [2,4]. In photonic devices, advantageous materials suitable for visible wavelengths are necessary because SiO2 and Si3N4 have relatively low refractive indices with low absorptions, while Si exhibits high absorption in this region [5]. Figure 1 shows the refractive indices and absorption coefficients of SiO2, Si3N4, hydrogenated amorphous Si (a-Si:H), and TiO2 as measured via ellipsometry in the visible and near-infrared ranges (400–1,000 nm). As demonstrated in Fig. 1, SiO2 and Si3N4 have refractive indices of approximately 1.5–2.0 and a-Si:H has a high absorption of approximately 0.8 in the visible range. By contrast, TiO2 has a refractive index of approximately 2.5 and no absorption at visible wavelengths. Owing to this, TiO2 has been spotlighted as a high-k dielectric material in electronics and is regarded as an advantageous material candidate for the fabrication of visible photonic devices [3,6–8]. Despite the increasing importance of TiO2, studies on the dry etching of TiO2 have not been reported to the best of our knowledge. This is owing to its peculiar material properties, such as high hardness (causing difficulty in etching) and different irregular grain sizes in thin-film growth and etching [9]. As the size of the structures to be etched decreases, the sidewalls of the etched TiO2 structures become rougher and more irregular, resulting in undesirable leakage currents and light scattering. Therefore, a dry-etching condition to fabricate TiO2 nanostructures with smooth and vertical sidewalls is essential in nano electronic and nano-photonic devices.

Here, we report the optimal etching conditions for fabricating TiO2 nanorods with a vertical sidewall angle of 89°. The TiO2 thin film was etched by changing the etching parameters of the gas combination. To determine the optimal etching conditions for TiO2 with vertical sidewalls, we measured the sidewall angles of the etched TiO2 nanostructures using scanning electron microscopy (SEM).

A 300-nm-thick TiO2 thin film was deposited on a quartz substrate by RF sputtering at room temperature. Subsequently, the e-beam resist of ZEP520A (ZEON Corporation) with a thickness of 200 nm was spin-coated on a TiO2-sputtered wafer. Gratings with a 400 nm period and a 0.5 filling fraction were patterned via e-beam lithography to create a Cr hard mask of 50 nm thickness through a liftoff process. Samples prepared with the Cr hard mask were plasma-etched for 2 min using an inductively coupled plasma reactive ion etcher (ICP RIE) with an ICP power of 900 W, bias power of 100 W, pressure of 5 mT, and at room temperature. After the etching process, cross-sectional images of the etched samples were obtained using SEM. From the obtained SEM images, we directly measured the sidewall angles of the etched TiO2 structures.

In the plasma-etching process, Cl2 is widely used to produce anisotropic Si sidewall profiles and etch compound semiconductors such as GaAs and InP [4,10,11]. Generally, a small amount of an inert gas such as He, Ar, or N2 is added to Cl2 to improve the sidewall angle vertically in a dry-etching process. Therefore, we first investigated the effect of adding Ar to Cl2 on the sidewall angle of the etched TiO2 structure. Figure 2(a) displays the cross-sectional SEM images of the TiO2 grating etched by Cl2 with 0, 25, 50, and 75 % Ar addition from left to right. From the SEM images, the sidewall angles were measured as 50, 60, 70, and 70°, respectively. This increases as the amount of Ar addition increases, but it saturates at 70° after the addition of 25 % Ar. The graph in Fig. 2(b) demonstrates the etching depth as a function of the amount of Ar added. The etched depths of each sample were measured as 105, 189, 162, and 128 nm, respectively. Fig. 2(b) depicts that the main etching gas was Cl2 because the etched depth decreased as the Ar addition ratio increased. 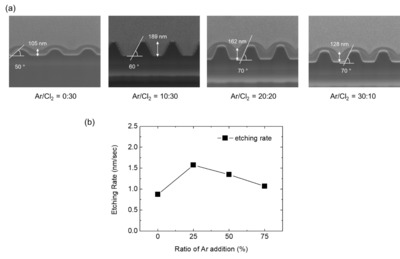 In addition to Cl2, boron trichlorine (BCl3) has been used as another major gas in the etching of Si and compound semiconductors [4,11,12]. Therefore, we repeated the etching test by changing Cl2 to BCl3. The TiO2 test samples were dry-etched using a gas combination of 25 and 50 % Ar added to the BCl3. Figure 3(a) displays the crosssectional SEM images of the TiO2 grating etched by BCl3 with 25 and 50 % Ar. From the SEM images, the sidewall angles of each image were measured as 80 and 79°. On comparing the etching results with the Ar/Cl2 combination, we observed that the use of the Ar/BCl3 combination was more effective in forming vertical sidewalls as the etched sidewall angle reached 80°. The graph in Fig. 3(b) demonstrates the etching depth using an Ar/BCl3 combination with 25 and 50 % Ar. The etched depths of each sample were measured as 161 and 238 nm, respectively. Unlike etching using the Ar/Cl2 combination, the etching depth continued to increase as the amount of added Ar increased. 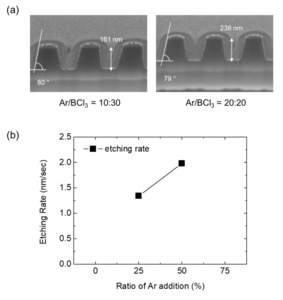 Figure 3. (a) Cross-sectional SEM images of TiO2 structures etched by Ar/BCl3 gas mixture with 10:30 and 20:20 sccm (Ar percentage of 25 and 50 % to BCl3). The etching time corresponds to 2 min in all cases. (b) Etching rate graph drawn in the function of Ar addition ratio to BCl3.

To increase the sidewall angle of the etched TiO2 structures more vertically, we added hydrogen bromide (HBr) to the Ar/BCl3 combination and investigated its effect on vertical sidewall formation. Generally, HBr has been studied to make the etched profile more anisotropic than a chlorine-based gas [13–15]. It has often been used to form deep Si trenches and obtain etching profiles with high aspect ratios in the compound semiconductor industry. However, because the addition of HBr tends to slow the etching rate and causes some defects, the amount of HBr is generally controlled to not exceed 50 % of the total amount. We used a gas combination of HBr/Ar/BCl3 in a 1:4:4 ratio in the etching test. Figure 4(a) displays the cross-sectional SEM images of the TiO2 grating sample after etching. The SEM images show that the sidewall angle increased and was measured at 89°. This implies that the addition of a small amount of HBr can effectively enhance the sidewall angle in the vertical direction. Based on the experimental results, we successfully fabricated TiO2 nanorod arrays with a 465-nm period and 155-nm and 300-nm diameters. Figure 4(b) displays the SEM images of the nanorods etched by the HBr/Ar/BCl3 combination at a pressure of 5 mT, ICP power of 900 W, and bias power of 100 W. 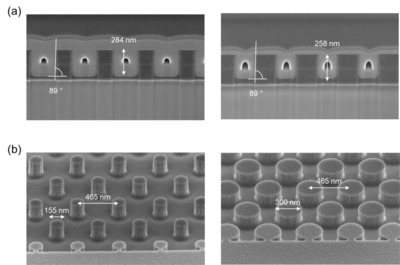 We investigated the dry etching conditions to fabricate TiO2 nanorods with vertical sidewalls while changing the gas combination of Ar/Cl2 and Ar/BCl3 and adding HBr in small amounts. By measuring the sidewall angles of the etched TiO2 structures directly from the SEM images, we concluded that the HBr/Ar/BCl3 combination yielded an etched sidewall angle of approximately 89°. All controlled parameters of the etching test and all sidewall angles measured from the SEM images are listed in Table I. Using the optimized etching conditions, we fabricated TiO2 nanorod arrays with vertical sidewalls for the successful application of visible metasurfaces.