Zinc oxide (ZnO), a direct and wide bandgap (3.37 eV) n-type semiconductor with a high exciton binding energy of 60 meV has been studied as one of the most important metal oxides, owing to its unique and excellent optical and physical properties [1–4]. ZnO nanowires and rods, in particular, have been extensively investigated for application in light-emitting diodes, sensors, and energy-harvesting elements such as piezoelectrics and solar cells [5–15]. A high on/off current ratio, fast response and recovery, and large photocurrent are desirable properties for sensors used in photosensing applications. However, ZnO nanomaterials exhibit relatively poor photocurrent response against ultraviolet (UV) light irradiation, which is a critical unsolved issue. To date, many researches have focused on methods to overcome this issue, including large-sized ZnO nanomaterial synthesis, use of a parallel array of ZnO nanowires, doping of foreign elements, and formation of nanocomposites with other components such as carbon nanotubes, graphene, and reduced graphene oxide [8–14]. Mishra and Adelung . [15–17] developed an approach involving the direct synthesis of hierarchical ZnO structures such as tetrapods, as a unique route to obtain high connectivity by diminishing the contact resistance, and some excellent results on gas sensing were reported using the technique. We have also reported the quick and facile synthesis of ZnO nanomaterials from microsized Zn powders using an atmospheric-pressure microwave plasma (APMP) jet system and controlled the morphologies to wires, rods and tetrapods by changing the composition of the plasma ignition gases [18–20]. Recently, we confirmed that the fast decomposition of methylene blue solution using the ZnO tetrapods produced. We conclude that this high photocatalytic ability is caused by not only the nanoscale size but also the surface-state modification due to the highly activated environment of APMP synthesis [21].

As a consecutive study, herein, we report the size-controlled synthesis of ZnO tetrapods using the APMP system, and demonstrate their size-dependent photosensing properties.

Details on the ZnO synthesis process are described elsewhere [18–20]. Briefly, the plasma gas for APMP (2.45 GHz) jet ignition– a gas mixture of O2 and N2 (5 N purity, 50:50 vol.%)–was introduced from a gas inlet into a quartz tube (600 mm length and 30 mm diameter) directly connected to the plasma jet. The total flow rate was fixed at 10 L/min. The applied plasma power was varied 500 and 1,200 W to investigate the effects of plasma power on the size of the ZnO tetrapods. Spherical Zn powder (Sigma-Aldrich, 95 % purity, 10 µm diameter) was continuously supplied in front of the plasma plume through a vibrator. After the plasma-aided ZnO synthesis, the ZnO tetrapods deposited on the inner wall of the quartz tube were carefully collected using a scraper. We denote the collection regions A (0–10 cm) and B (30–40 cm) according to the distance from the plasma-reaction region as shown in Fig. 1. 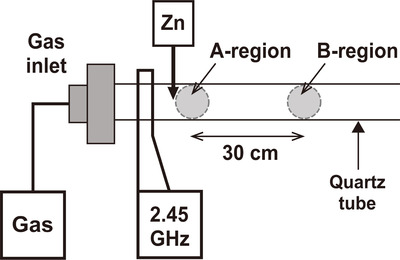 Scanning electron microscopy (SEM, Hitachi S-4800) and transmission electron microscopy (TEM, JEOL, JEM-2100F) were employed to investigate the size and structural properties of the generated ZnO tetrapods. X-ray diffraction (XRD, PANalytical, X’Pert Pro) with Cu Kα radiation (λ = 0.154 nm) was performed to confirm the purity and crystallinity of the synthesized ZnO tetrapods. Raman spectroscopy (ARAMIS, Horiba), using a 532 nm laser with an output power of 3 mW, was performed to investigate the vibrational modes of the ZnO. A four-point probe (AIT, CMT-SR100N) was used to evaluate the sheet resistance of the ZnO tetrapod films prepared through spray-coating.

We firstdispersed the produced ZnO tetrapods in deionized water with a concentration of 20 mg/mL. Then, we spray coated the solution onto an SiO2-covered Si wafer (7 × 7 mm2) installed on a hot plate (80 °C) under ambient. The number of sprays and distance between the spray nozzle and wafer was 40 times and 20 cm, respectively. The sensing device was fabricated by Au electrodes (200 nm thick, 3 mm width). The photosensing properties were quantitatively evaluated by measuring the photocurrent using a source measurement unit (SMU 2400, Keithley) when UV light (300–350 nm) was irradiated. The distance between the UV lamp (100 mW/cm2) and wafer was fixed at 2.5 cm.

Figure 2 shows the SEM images of the ZnO tetrapods synthesized at different plasma powers (500 and 1,200 W) and with different collection sites. As mentioned earlier, A and B imply the collection sites at distances of 0–10 and 30–40 cm, respectively, from the Zn inlet region. Here, the particle size is defined as the distance between the two arms of a tetrapod. It is found that the sizes of the 500A samples are smaller than that of the 500B samples, as shown in Figs. 2(a) and 2(b). This means that the regions farther from the plasma plume have longer growth times than the regions closer to the plume, for the same plasma power. In addition, on comparing Figs. 2(a) and 2(c), it is found that the sizes of the tetrapods increase with increasing plasma power, within the same region. This is natural, because higher applied power yields higher plasma temperature and a higher number of active species in the plasma, enhancing the growth environment. 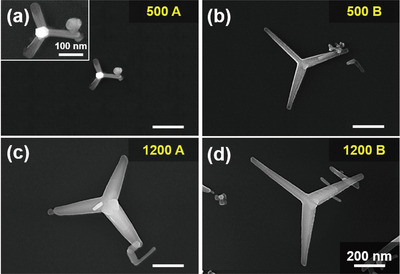 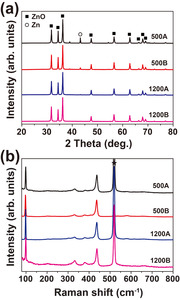 Figure 3. (a) XRDand (b) Raman spectra of synthesized ZnO tetrapods with respect to applied plasma powers and collection sites.

Figure 3(b) shows the Raman spectra of the ZnO tetrapods with respect to the applied plasma powers and collection sites. In general, major peaks resulting from the E2L, 2E2L, E2H–E2L and E2H vibrational modes of ZnO are observed at 99, 198, 337, and 436 cm−1, respectively. An additional mode resulting from structural defects or dopants in ZnO can appear at 275 cm−1. In this study, only the peaks related to the E2L, 2E2L, and E2H–E2L vibrational modes are observed without any additional mode peak. Here, the strong peak at 530 cm−1 is caused by the SiO2/Si substrate. Based on the XRD and Raman analyses, we conclude that all the samples have high purity despite their differences in diameter and length.

Figure 4(a) shows a representative TEM image of the ZnO tetrapods. The upper inset is a low-magnification image showing a single tetrapod and the lower inset shows the selected-area electron diffraction pattern revealing the high crystallinity of the synthesized ZnO tetrapods. Fig. 4(b) is the high-resolution TEM image of the redsquared region in Fig. 4(a) clearly shows the lattice fringes of the (001) planes of the ZnO hexagonal phase, and as shown inset in Fig. 4(b) reveals an interplanar distance of 0.52 nm along the -axis. The corresponding fast Fourier transform (FFT) pattern also shows good coincidence with the TEM image. 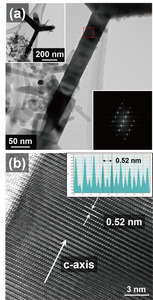 A photosensing device was prepared using ZnO tetrapods and the photocurrent responses of the tetrapods to UV light irradiation were measured. Figure 5(a) is a schematic drawing of the UV-sensing measurement. A top view of the device is shown in Fig. 5(b). Figures 5(c) and 5(d) show the cross-sectional SEM images of the devices fabricated using 500A and 1200B samples, respectively. The heights of the ZnO tetrapod films are approximately 1.8 and 5.7 µm, respectively. Figure 5(e) shows the photocurrent curves obtained from the different samples under alternative UV light irradiation. The photocurrent of the 500A sample is 1 µA, and it increases to 3.8, 4.3, and 6.2 µA for the 500B, 1200A, and 1200B samples, respectively. The conduction of nanostructured thin-film devices, such as those using single-walled carbon nanotubes or graphene, was studied extensively by Grüner . [21–23] and Coleman . [24–27] and explained in terms of the percolation theory. This explanation is applicable in this study also, as the situation is similar. That is the device having larger tetrapods has lower contact resistance between the ZnO tetrapods. We obtained the highest photocurrent from the device coated by 1200B samples. To understand the result quantitatively, we evaluated the sensitivity and measured the sheet resistance of the samples used in Fig. 5. 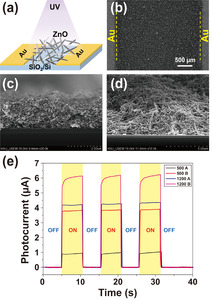 Figure 5. (a) Schematic drawing shows UV sensing measurement. (b) SEM image is top view of the device. (c) and (d) are cross sectional SEM images obtained from 500A and 1200B samples, respectively. (e) UV photoresponse curves with respect to applied plasma powers and collection sites. 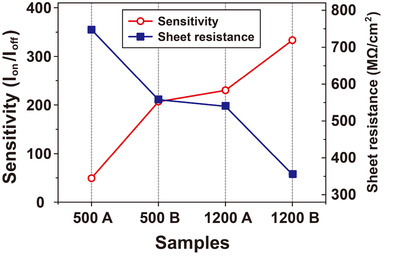 Figure 6. Changes of sensitivity and sheet resistance of the devices with respect to applied plasma powers and collection sites.

To evaluate the reliability and durability of the device, we characterized the photosensing performance using a device made of 1200B sample. First, we measured the photocurrent at different UV lamp powers. As the power of the UV light source gradually increased from 0.1 to 2.0 W, the photocurrent increased from 0.02 to 1.35 µA, respectively [Fig. 7(a)]. Next, we shined the UV light with 0.2, 0.5, 1.0, and 2.0 W power at 10 s on/off intervals and measured the corresponding photocurrents. To confirm the reliability of the device, the measurement was carried out repeatedly using the same sequence, and the result is shown in Fig. 7(b). It is clearly confirmed that a stable and reliable photocurrent is obtained corresponding to the repetitive change in UV light irradiation. To sum up, our results show that highly crystalline ZnO tetrapods were successfully synthesized using the APMP jet system and that their sizes were controlled by changing the plasma power and collection sites. In addition, we found the size dependence of photosensing properties: larger ZnO tetrapods yielded higher photocurrent and sensitivity. 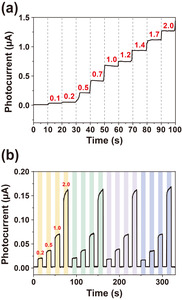 We demonstrated the size-controlled synthesis of ZnO tetrapods using an APMP jet system and analyzed their size-dependent photosensing properties. We obtained ZnO tetrapods of different sizes by changing the applied plasma power and collection sites in the quartz tubes. The results of TEM, Raman, and XRD analyses showed that all the synthesized ZnO tetrapods had high crystallinity. To compare the size-dependent photosensing properties, devices were fabricated by simply spray coating ZnO-tetrapod–suspended deionized water solution. It was found that larger ZnO tetrapods produced higher photocurrent, faster sensitivity, and lower sheet resistance. It was also found that the lower contact resistance due to the reduced number of contacts in the larger-sized ZnO samples was responsible for the better photosensing properties.